Marking the half way point of the artists’ time at Pilotenkueche art residency, Rutschbahn, the second exhibition of Pilotenkueche round 37, opened on Friday, the 16th of November 2018 at Krudebude.  Krudebude is an unusual exhibition space set in a “Wächterhaus” – a very Leipzig concept which provides apartments and other project spaces for inexpensive rent –. This made for a intimate and friendly atmosphere throughout the evening .

The 10 participating artists were encouraged to collaborate and make use of the space and its peculiar characteristics. This was particularly visible with Buket Savci’s work Hole of Mystical Desire, which was placed in direct relation with the remains of flowered wallpaper on one of the doors;  Jan Yongdeok Lim’s installation Smoke, which appropriated the coal burning stove in one of the rooms, and Reinhold Ponesch’s RIDE MY HORNS, placed just above one of the door frames in the entrance hall in reference to the traditional placement of mounted horns.

A great number of guests arrived as soon as the clock hit 7pm, and just an hour later, everyone gathered in one of the rooms to watch Reinhold Ponesch and Tamaki Kawaguchi’s collaborative performance IT CONCERNS YOU. This was Reinhold Ponesch’s and Tamaki Kawaguchi’s first experience with performance art. It was engaging to see how fiercely emotions were portrayed by the two artists. The audience was also positively taken by surprise when encouraged to participate.

We welcomed some familiar faces, previously spotted at the artists’ first exhibition – I Accept the Cookies – who were enthusiastic to see the development of the artists’ practice from  its first work-in-progress sneak peak. New faces kept on arriving until late in the evening, and the same was visible at the finissage last Thursday, 22 November 2018. Ann-Kathrin – one of the organizers of Krudebude – was positively amazed by the show, claiming it was one of the best so far at the space, both in quality and attendance.

The evening began with a welcome speech by Barbara Röhner, owner of Alte Handelsschule and organizer of its exhibition space, followed by words from curator Viviane Tabach. For the curator, this show marks a turning point in the artists’ creative journey at the residency, where they can naturally invent their spaces within the large floor areas of the space, as well as its high ceilings. The artists finally have the freedom to exhibit some of the larger works that have been behind the studio walls, anxiously awaiting their moment. There was also space to develop site-specific work, as Luca Arboccò so rightly did.

Before reaching the second floor where the exhibition takes place, visitors were surprised by flashing colours on their right as they walked up the stairs. As they followed this intriguing set of blue and purple lights, they found the first piece from the exhibition, No Broken Mirrors Shift Between Our Glance, by Nicholas Adamson. At first just a broken chair carefully laid on the floor, once the visitors moved closer and engaged in the space, they could see a mirror below the chair, reflecting an oil painting of a clown. 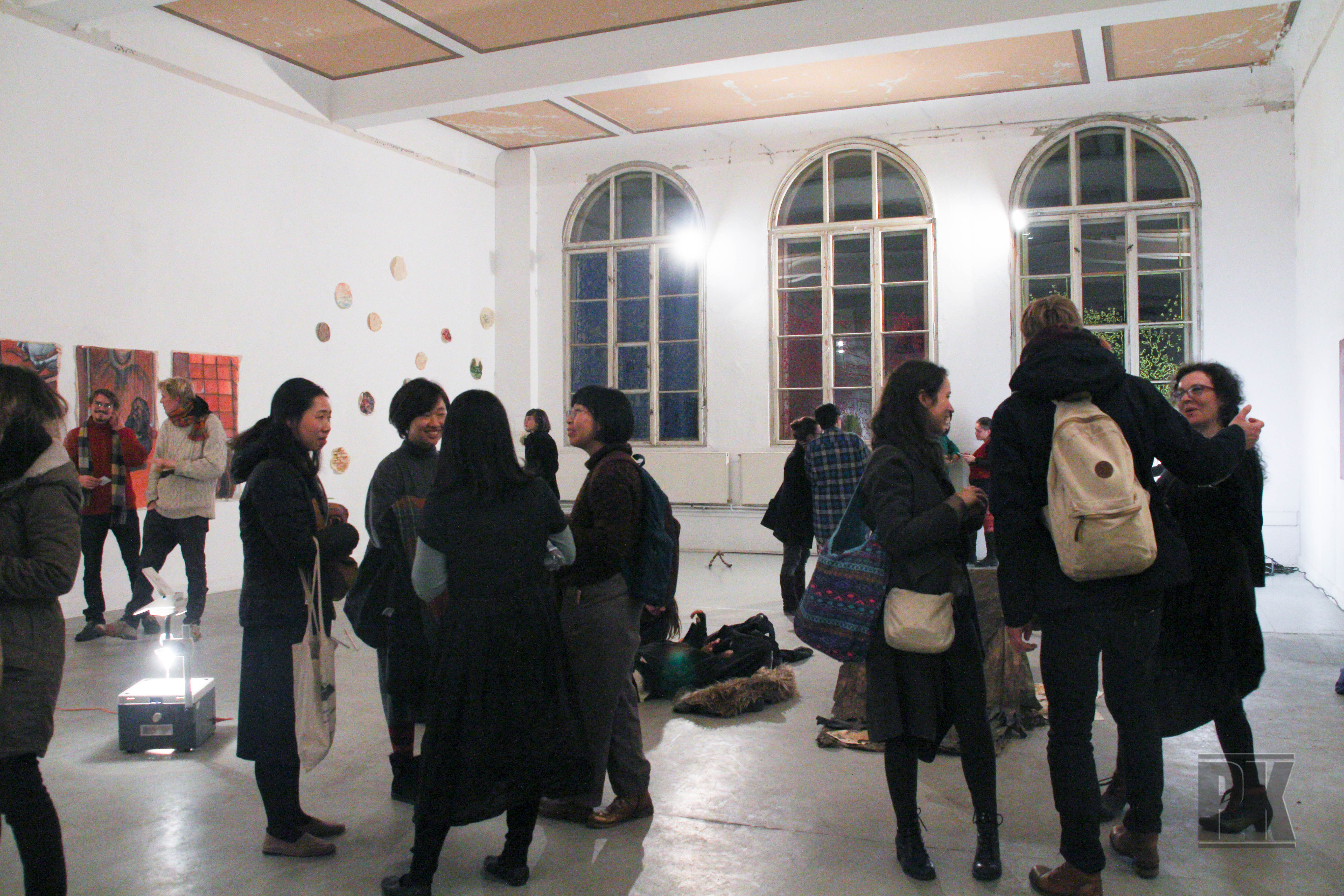 As the visitors continued up the stairs, they were intoxicated by the sound of Izabela Kałduńska’s music performance “The New Solarism” as they entered the exhibition space. Sitting in harmony amid Finn Curry and David Benarroch’s sculptures, the audience was treated to an hour long experimental performance that shifted between loops of classical violin arrangements and other sounds such as tearing paper, taps on wood and voice.

Some visitors were noticed exploring the processes of Jan Yongdeok Lim’s Draainweg series through touch, which was interestingly unusual; others were intrigued by Barry Amey’s pieces and their reflection of colour on the wall, and curiously placed their hands behind the pieces to sense their heat – or as they then discovered, the lack of it – in an attempt to explore if they conveyed any light. For many guests, the most striking pieces were Julia Eichler’s Borderwallprototype I and II, for their materiality and playfulness; discovering they are relatively light, considering appearing heavy.

As the evening progressed, the guests grew comfortable – some sat in each corner of the room discussing the different works on view, and others laid on the floor next to Ai Ikeda’s piece Reassembling Matters, almost blending in with the ropes, kraft and waste papers.

These were two nights to remember and we cannot wait to meet again at the most awaited of all exhibitions –  the final one.