Take an object. Any object you carry around in your pocket. It can be a receipt or a picture of a lover. If you roam the streets empty-handed, take whatever appears in front of you. Now, take a picture of it with your cellphone; spend a good minute looking at it. Isn’t it magical how objects, when transferred to the world of digital, expand or contract to furnish the entirety of the picture plane? In the face of everything presented all at once, at the Warm White Cow exhibition, be careful – an Alice in Wonderland syndrome may arise.

Recently, we see the world through the luminous squares we carry around in our pockets, we are accustomed to perceiving the world in a deformed, digitized, skewed way. This is showcased at Warm White Cow by, among others, Devon’s Plett in his canvases. He takes a piece of everyday mundanity, almost identical receipts from a global fast-food chain from two different parts of the world. He makes them bigger, explodes them onto canvases meters in height and width. Standing in the room with the high ceiling they don’t seem so big anymore. Hence, how big are we really? How small is the world if any continent is so easily reachable?

In the Warm White Cow exhibition at AHS a visual kind of semantic satiation starts playing with your senses and makes it hard to understand the scale of anything really. Be it the rigid physical reality that encapsulates us; the endless turning of the clocks, putting us somewhere in the nameless middle of infinite historical time; or the perception of you and me, watching each other through the screen, slowly losing touch with who is watching, and who is being observed. 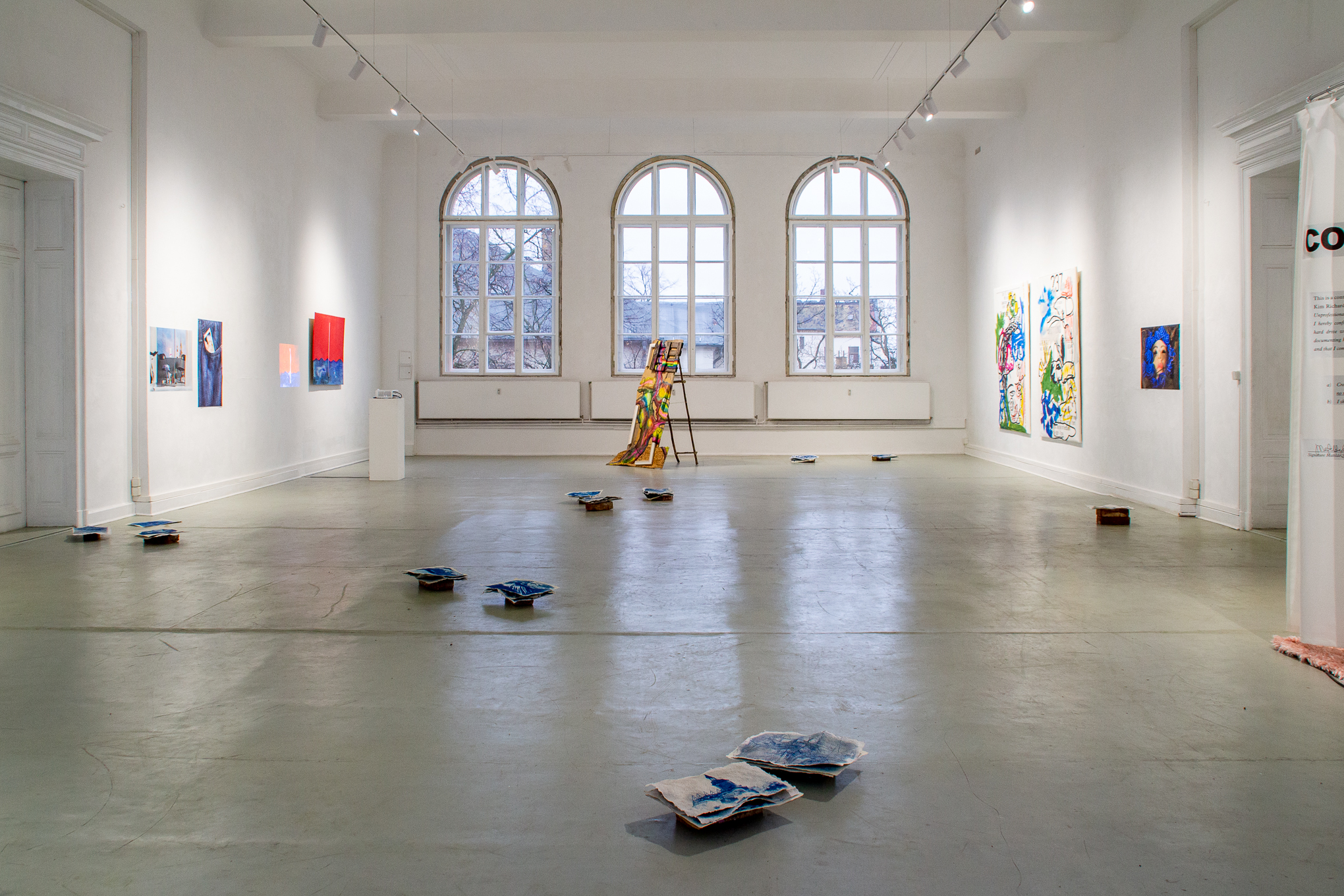 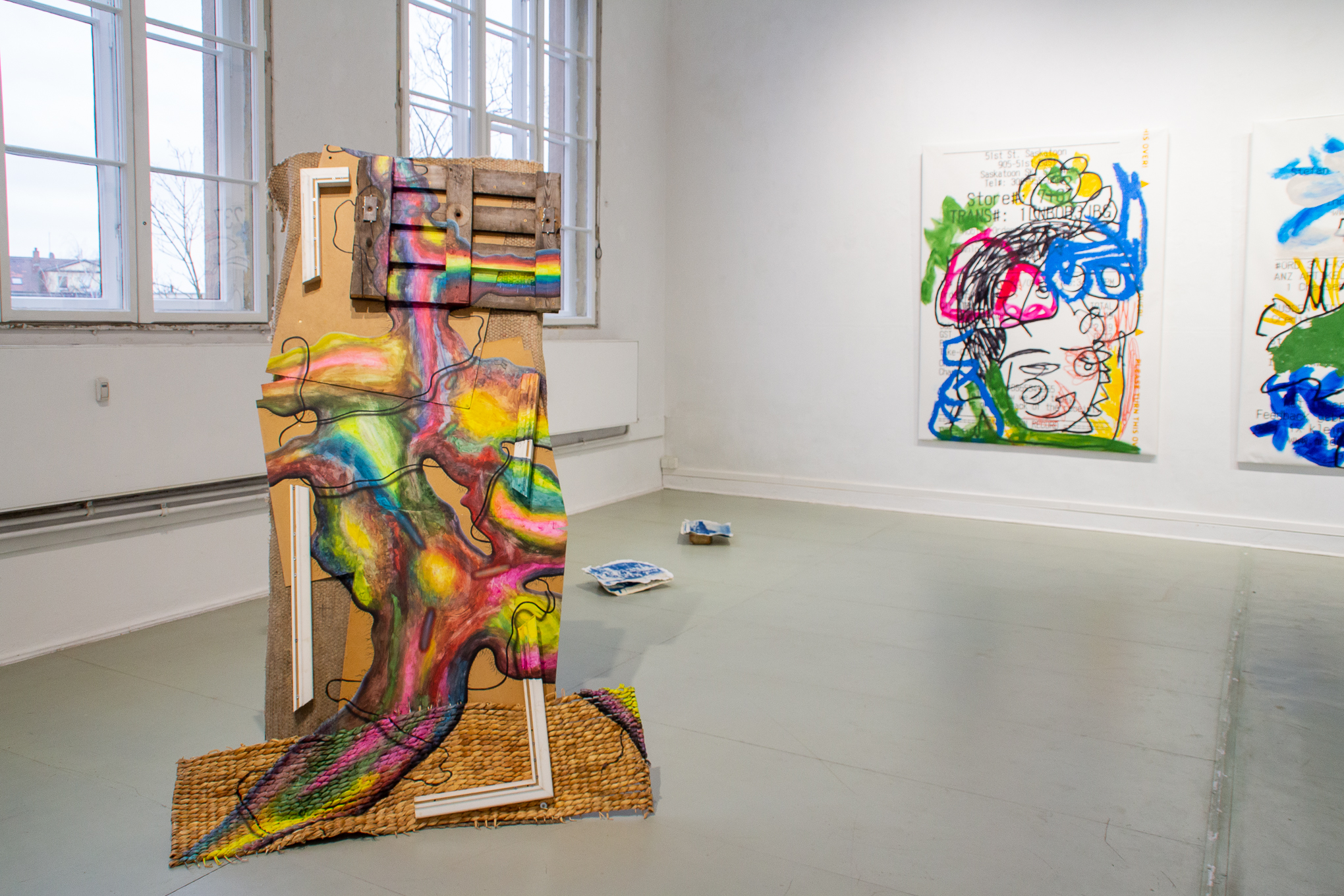 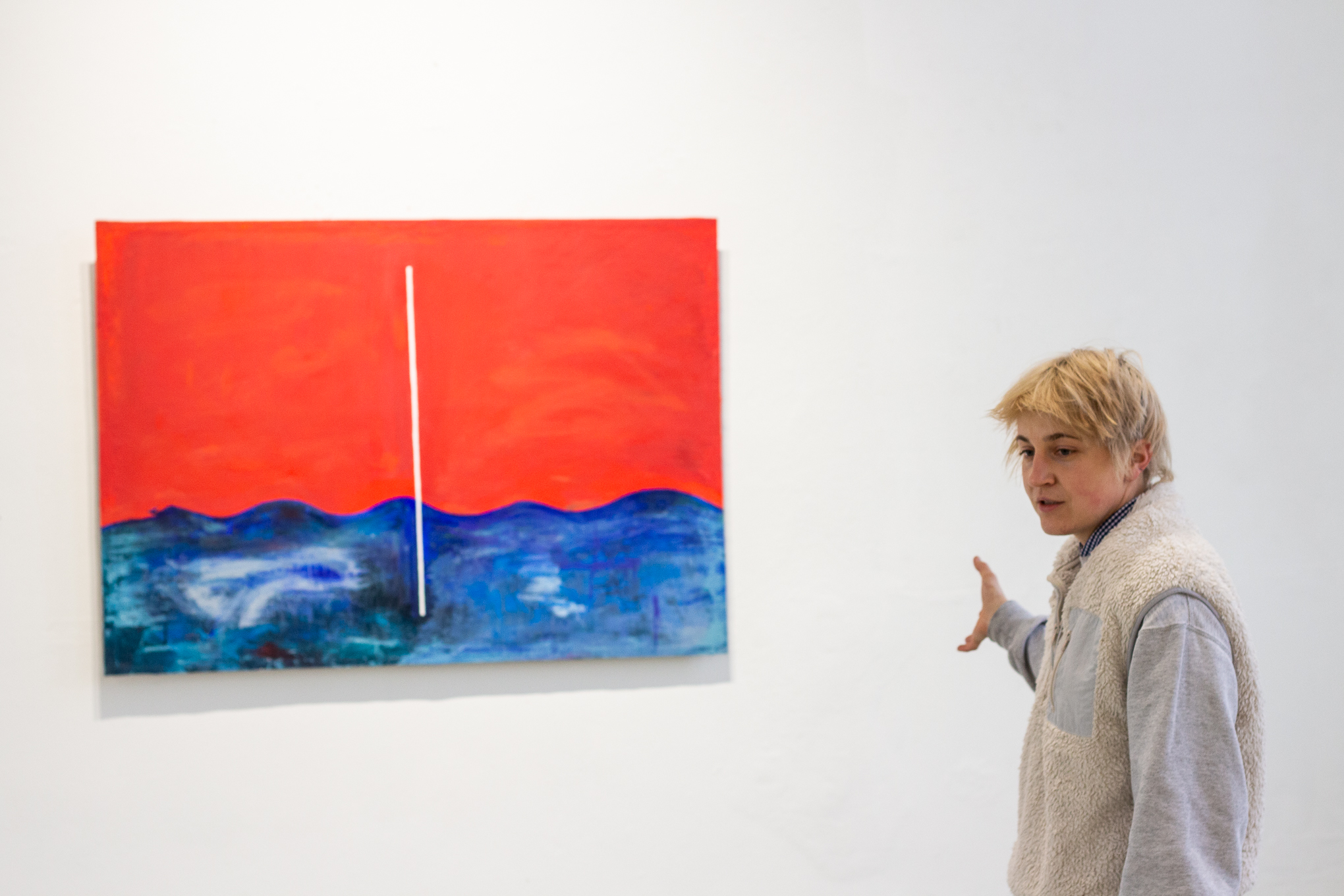 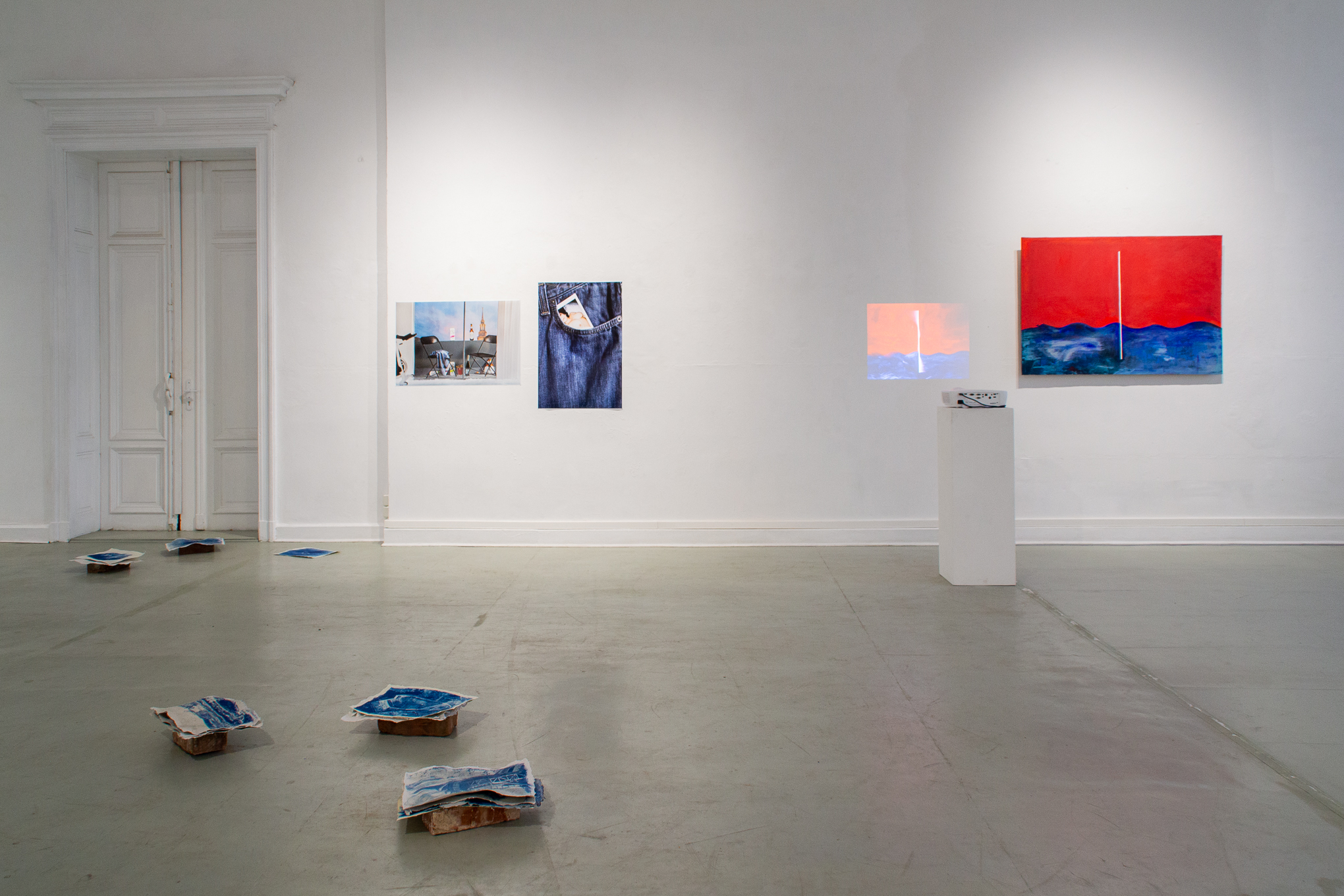 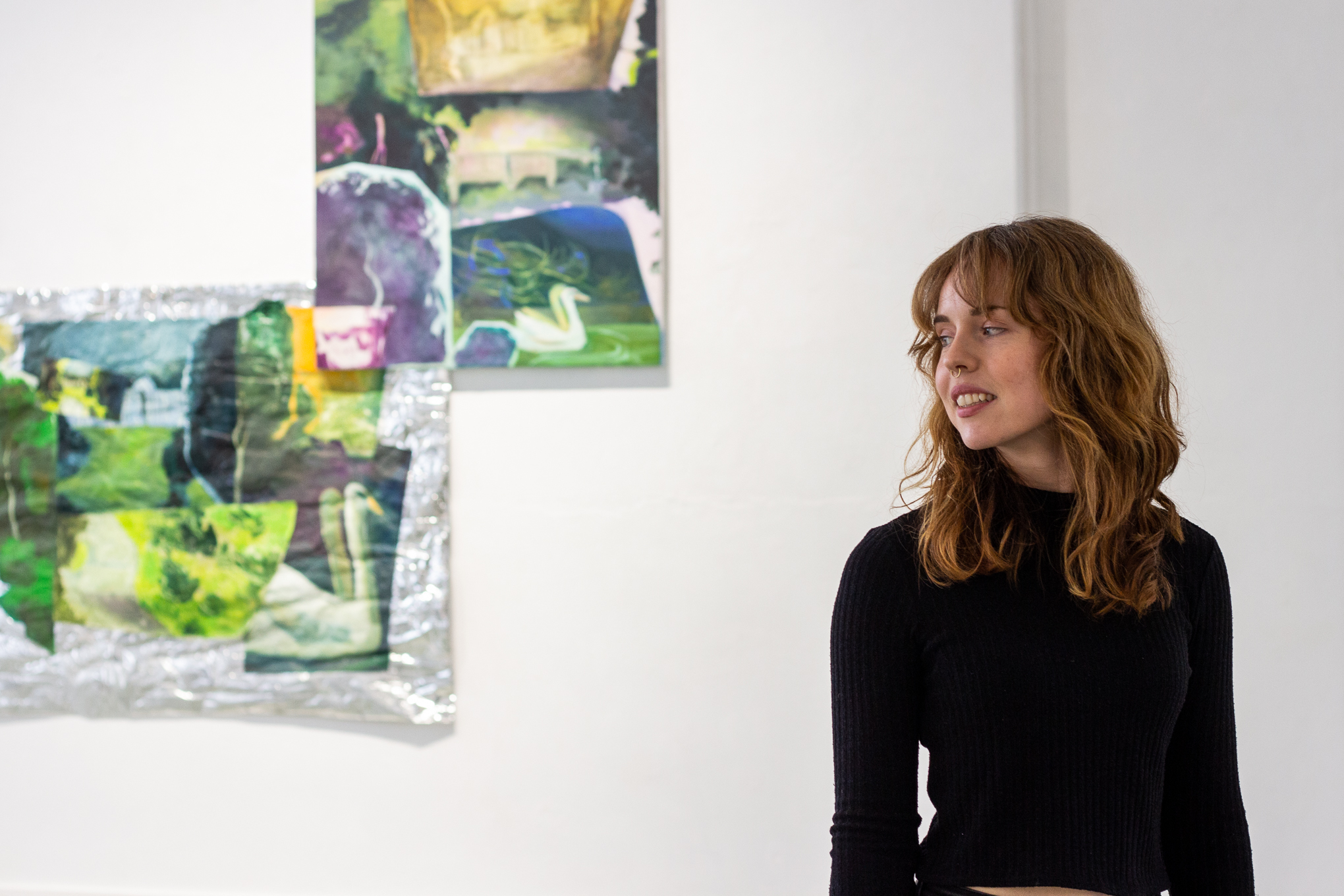 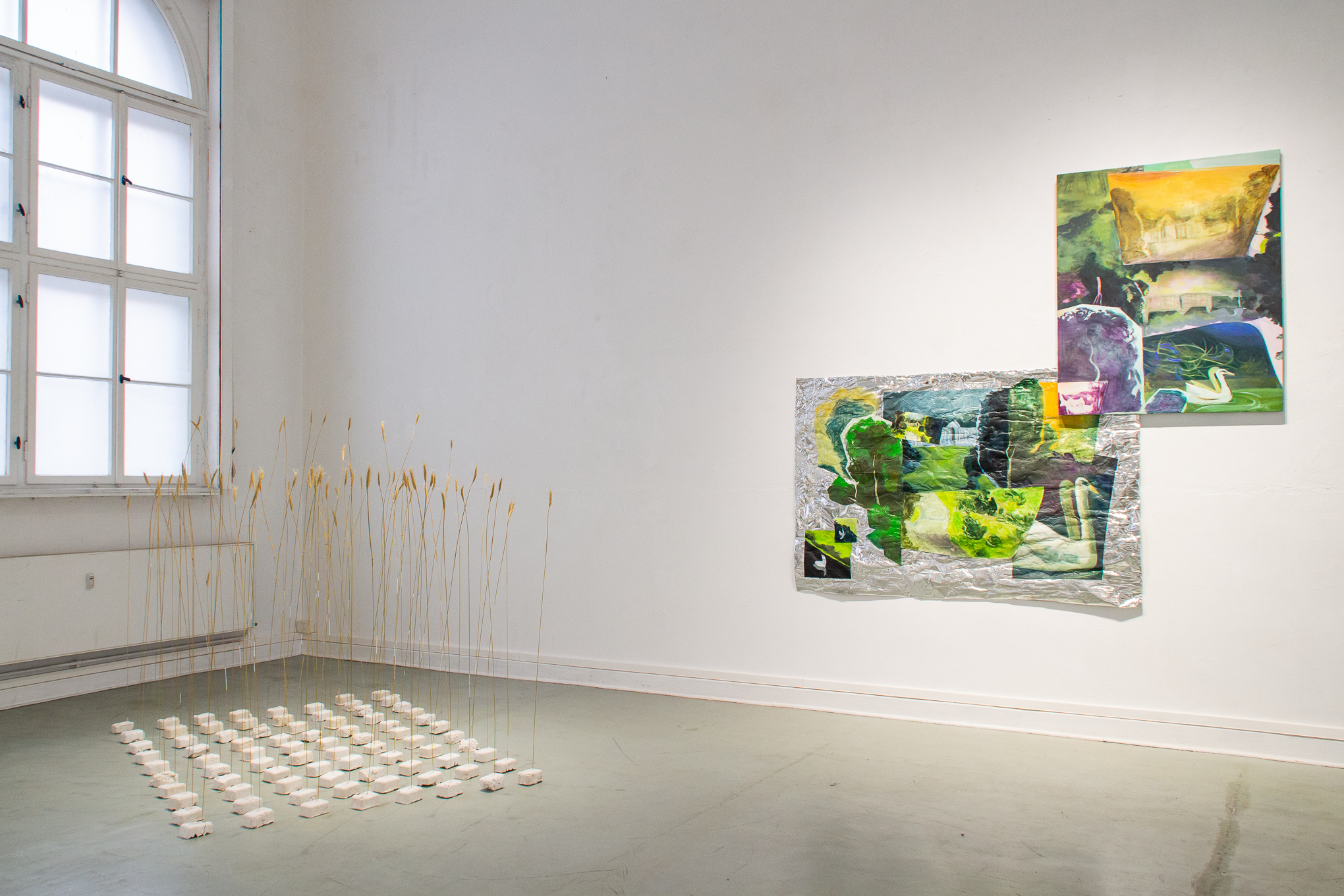 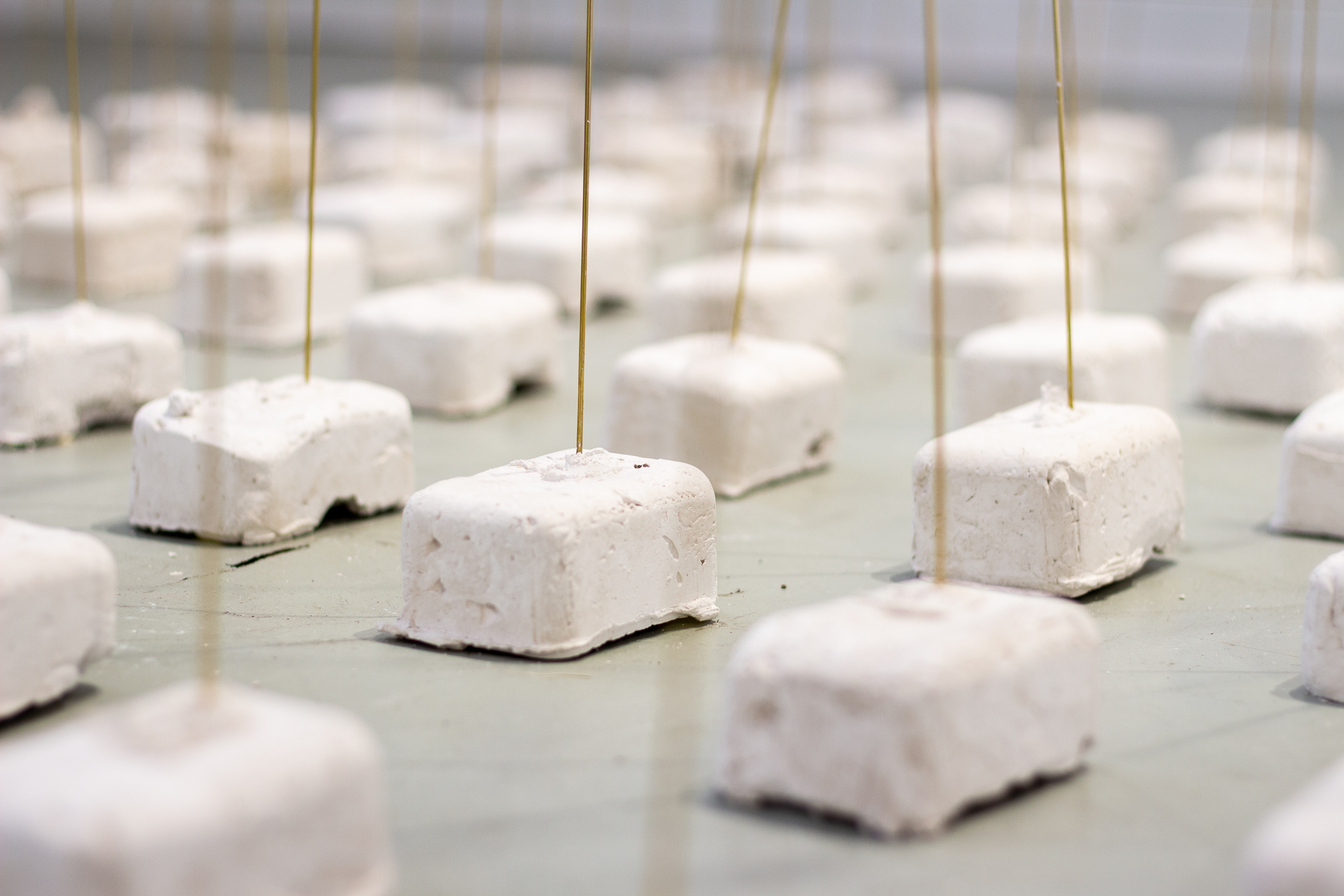 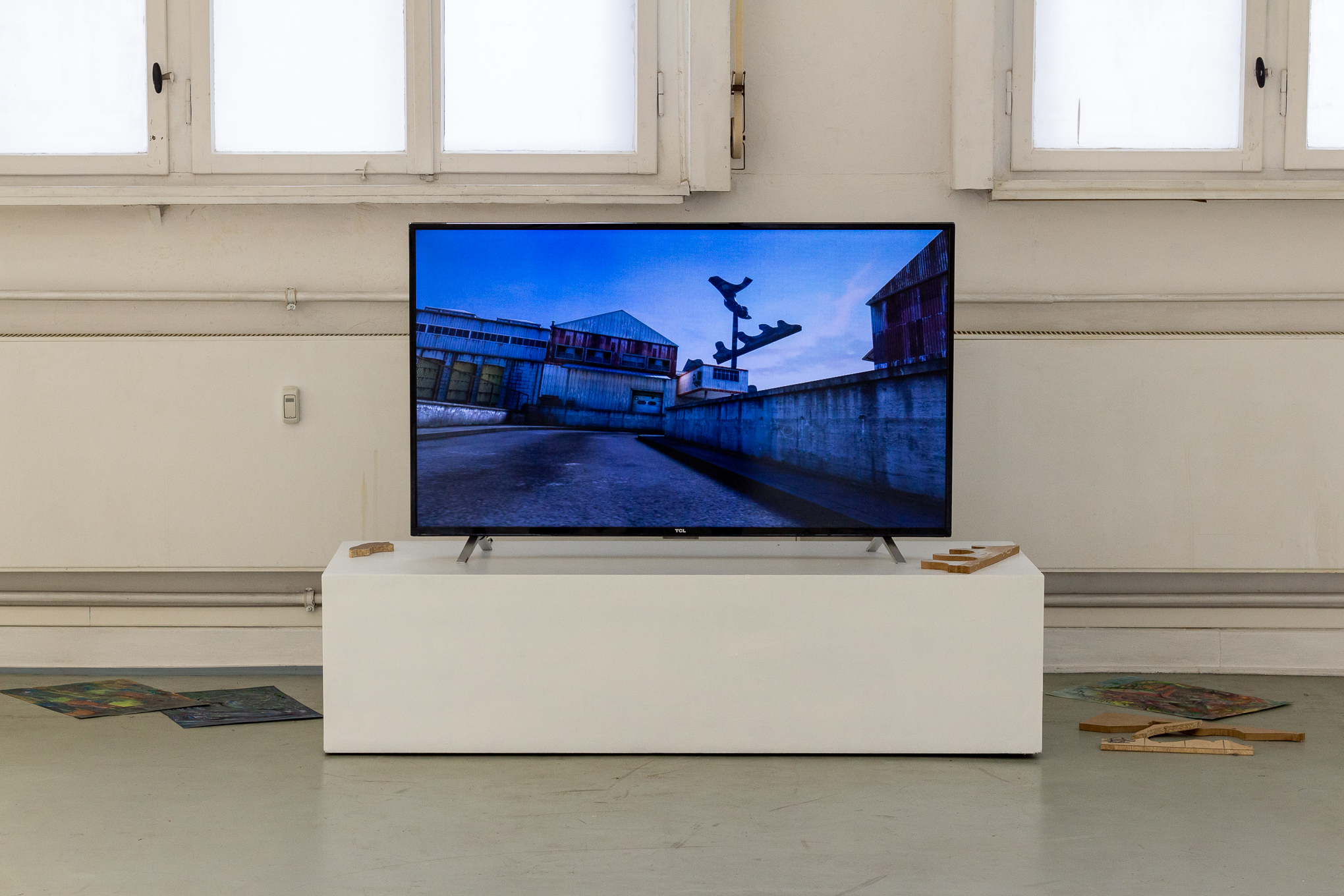 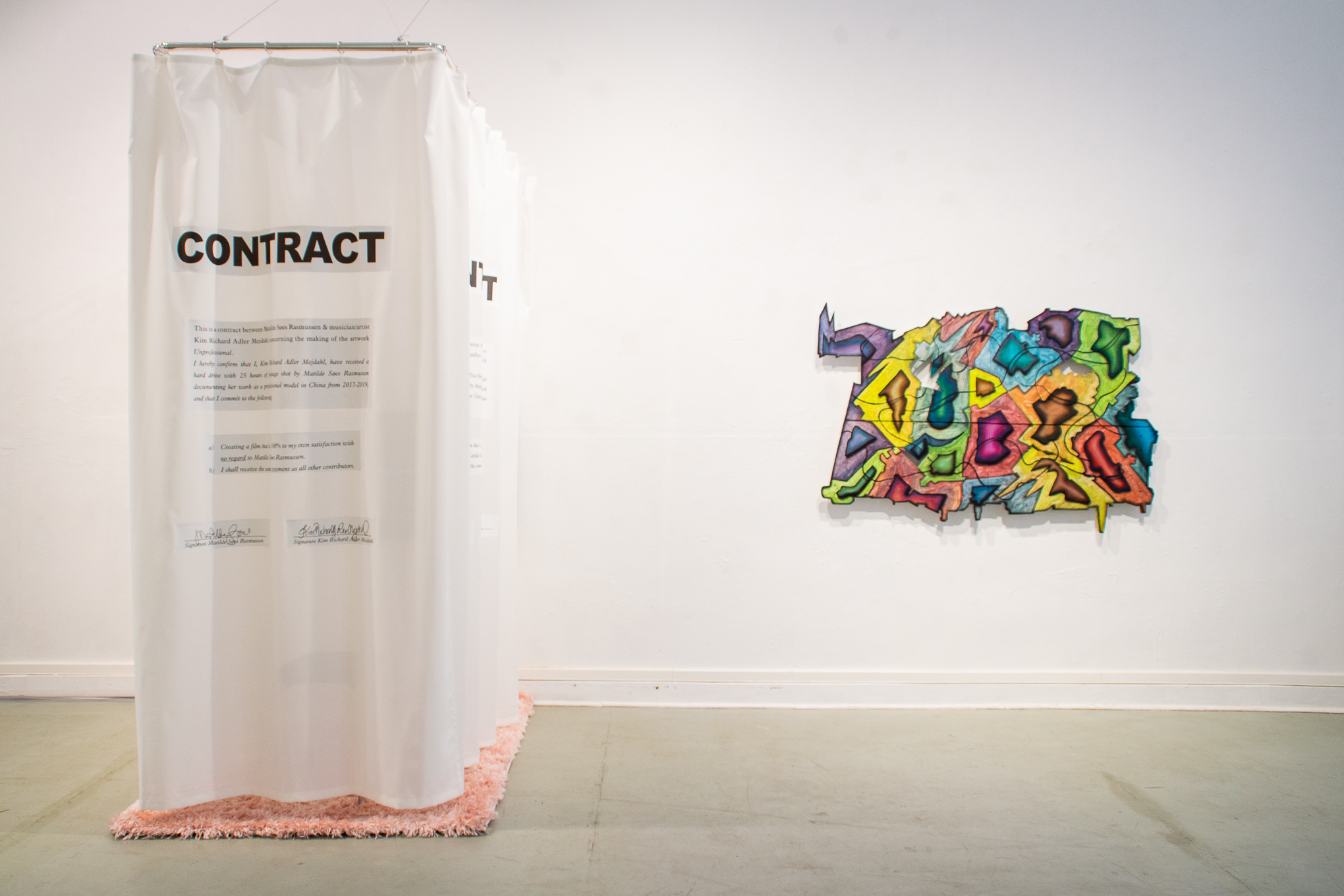 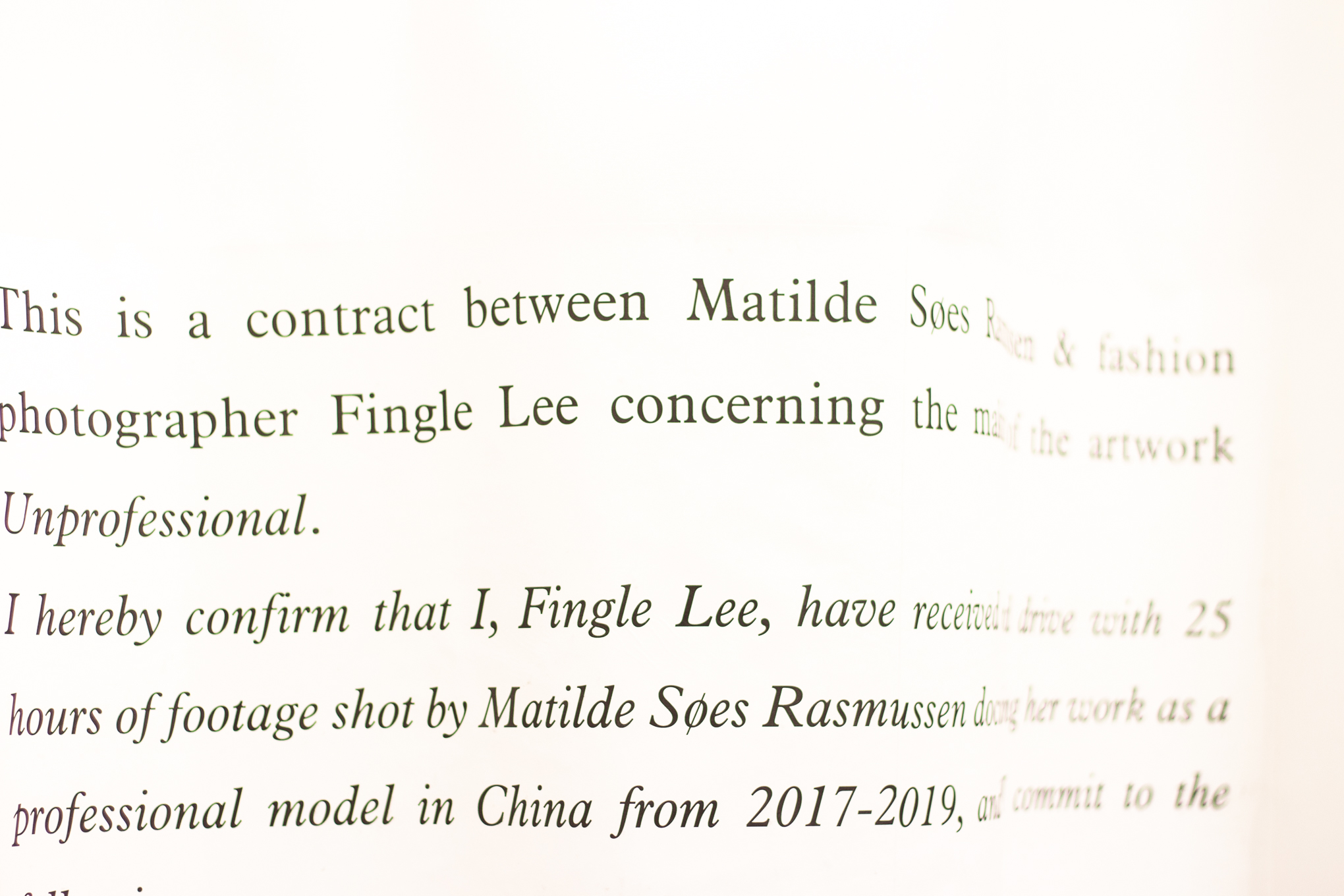 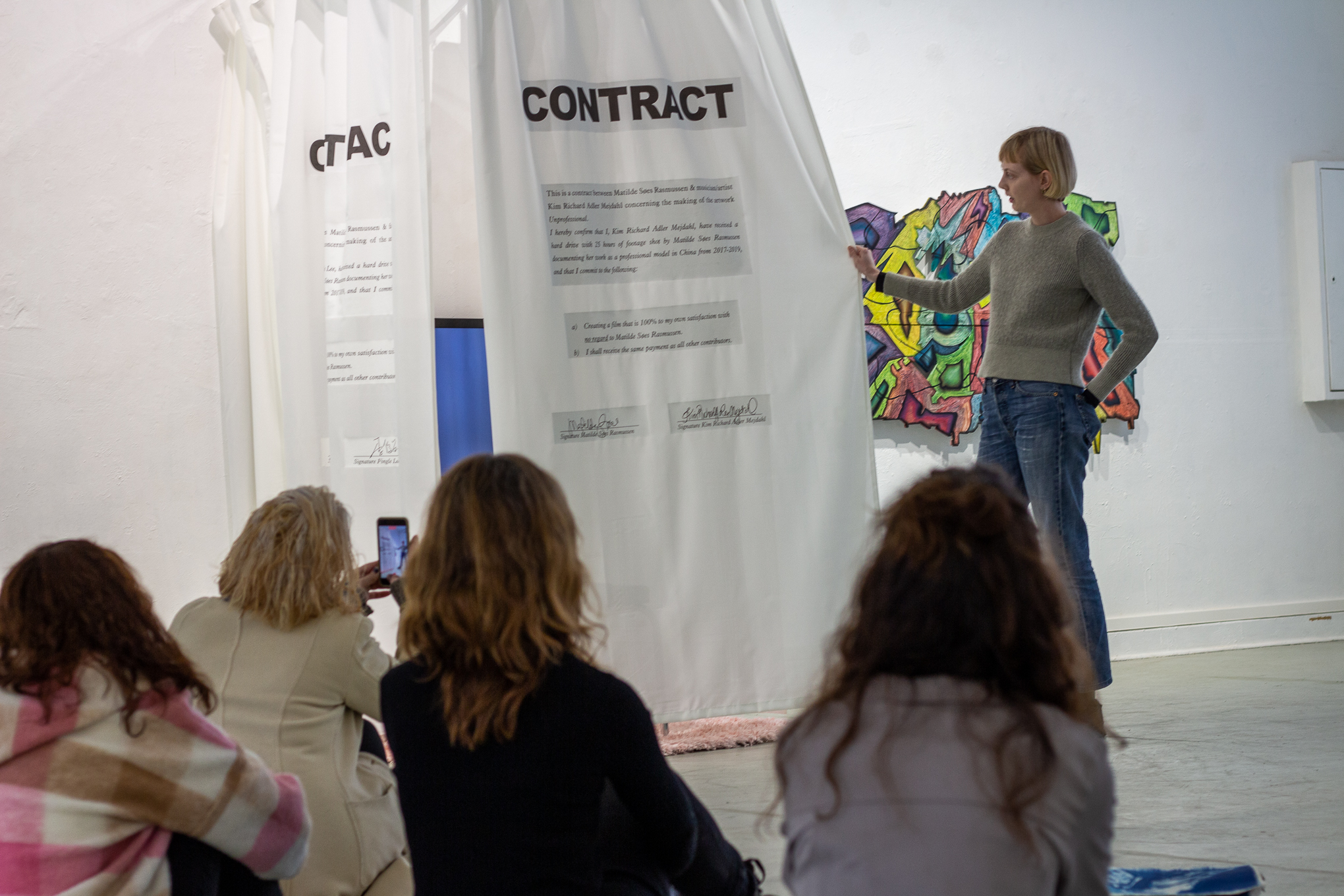 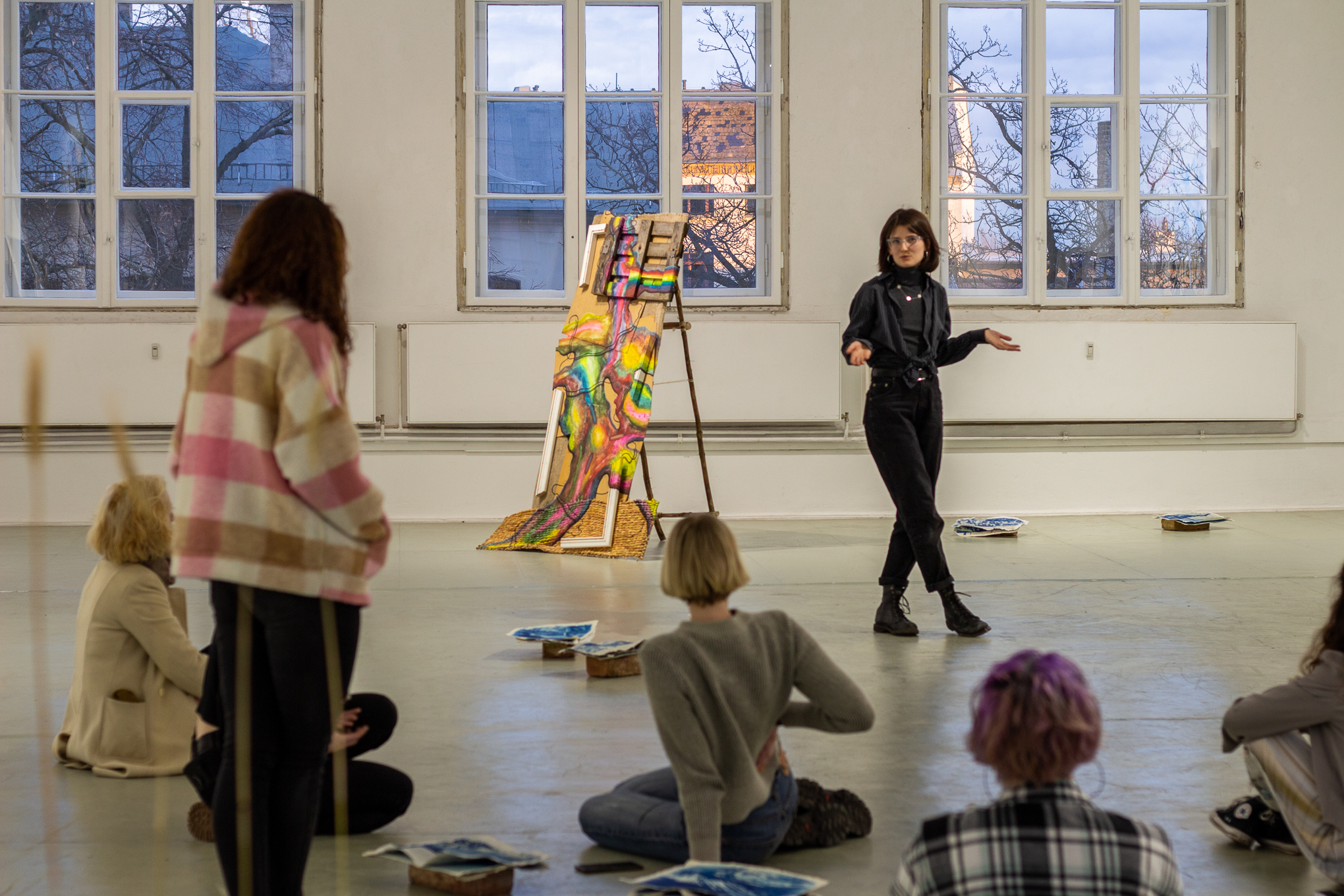 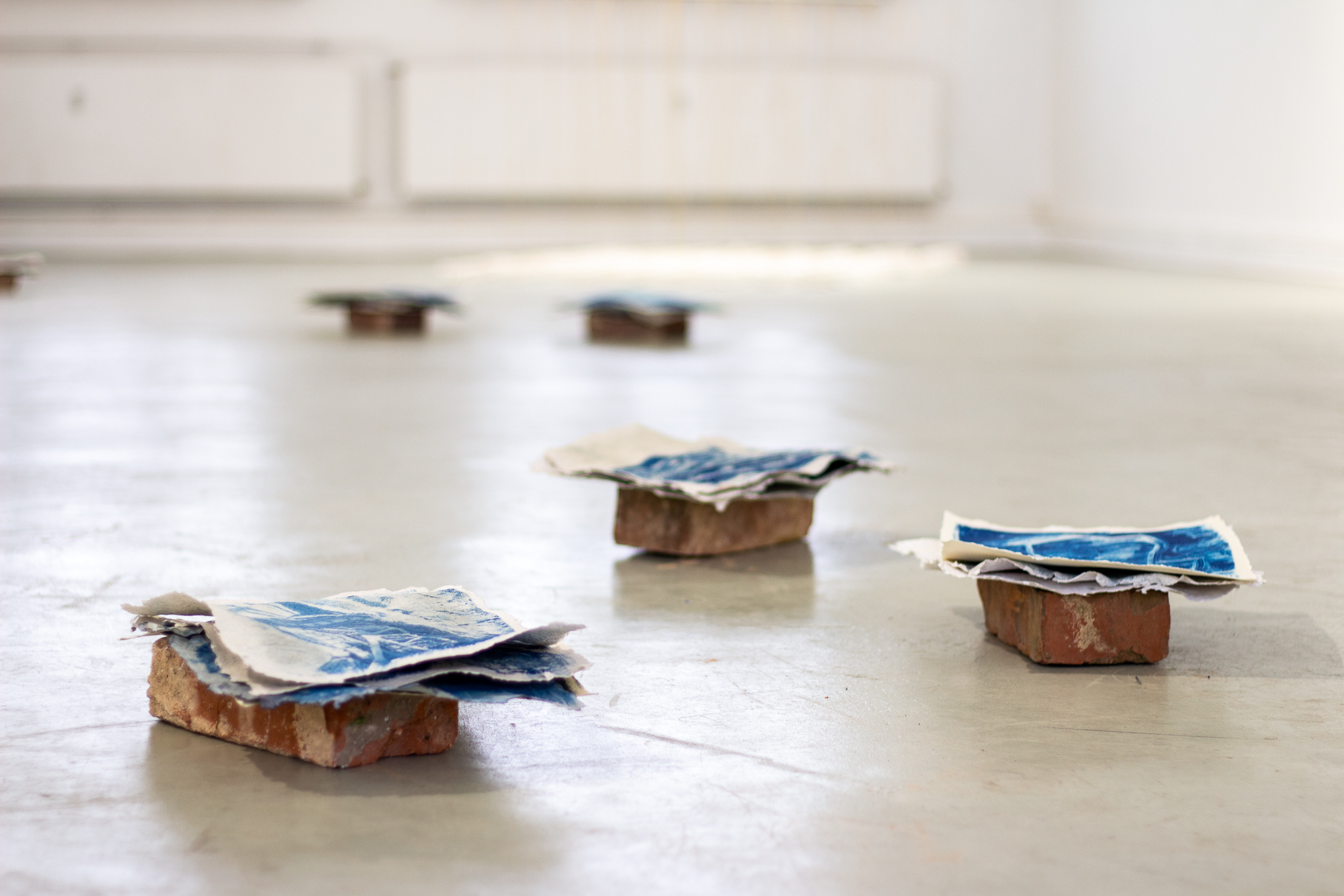 In a way, a screen can also be understood as a curtain veiling our senses and distorting our perceptions. Behind a fitting room curtain, Matilde Søes Rasmussen (DK/SE) invites us to see her as artistic material. The process of becoming material in somebody else’s hands is two-fold. First she is a model, her movements and appearances are directed. Then she is a character in a cut up doc movie, without any regards to her as a person, as stated in the contract between her and the editor. Paradoxically that is how we become the owners of representation of our exposed selves.

On one hand, we see Rachael McArthur bringing to view her auto portraite series photographs as a one of a lover preserved in your pocket. In other photographic work she ritually kills the character. The persona, once carefully crafted, now finds its outer shell half buried in sod, surrounded by a crown of blue roses. Throughout the exhibition multiple overlapping trajectories form a complex narrative plane of intimate stories. Through immersion we start to counter the prevailing ways of looking without seeing.

In Molly Burt-Westvig ’s work, mirror-like surfaces reflect on the state of our social landscape by cutting-up a classical study of a serene garden. Heat blankets fail to retain any warmth as they cover the bodies of those who cross borders in fear for their lives. A serene picture of a magical garden arises to turn your glance away from the warmth of the bodies radiating tangible heat.

A landscape that is in flux, expanding and contracting, constantly evolves into something else. Its impermanence is rooted in the simple formula: human life has a beginning and an end. In Ziemowit’s Fincek  canvases, the rough edge surrounds the bubbling city life that is about to burst out of existence. Tracing the skyline with our fingers we touch the contours of our own being. 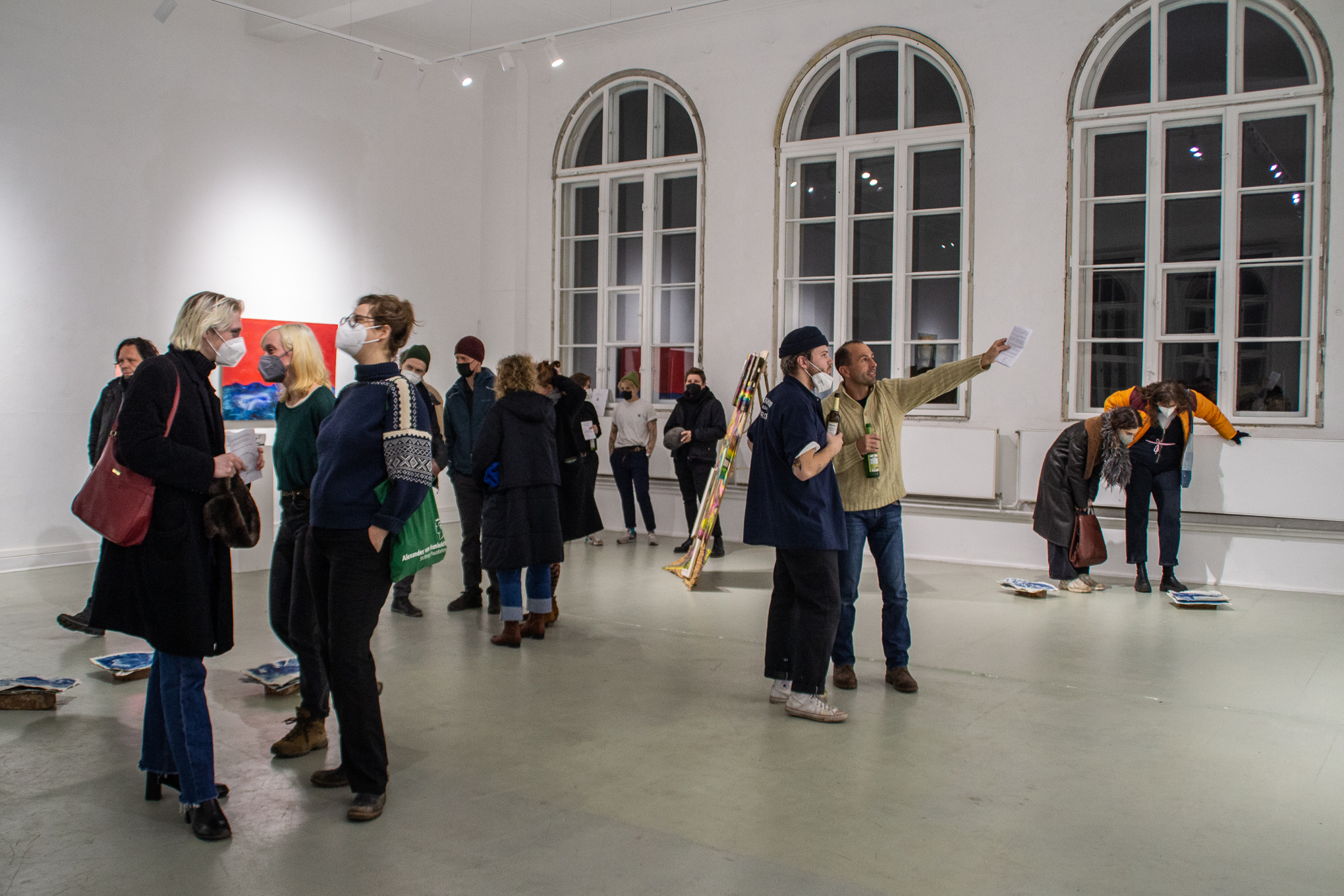 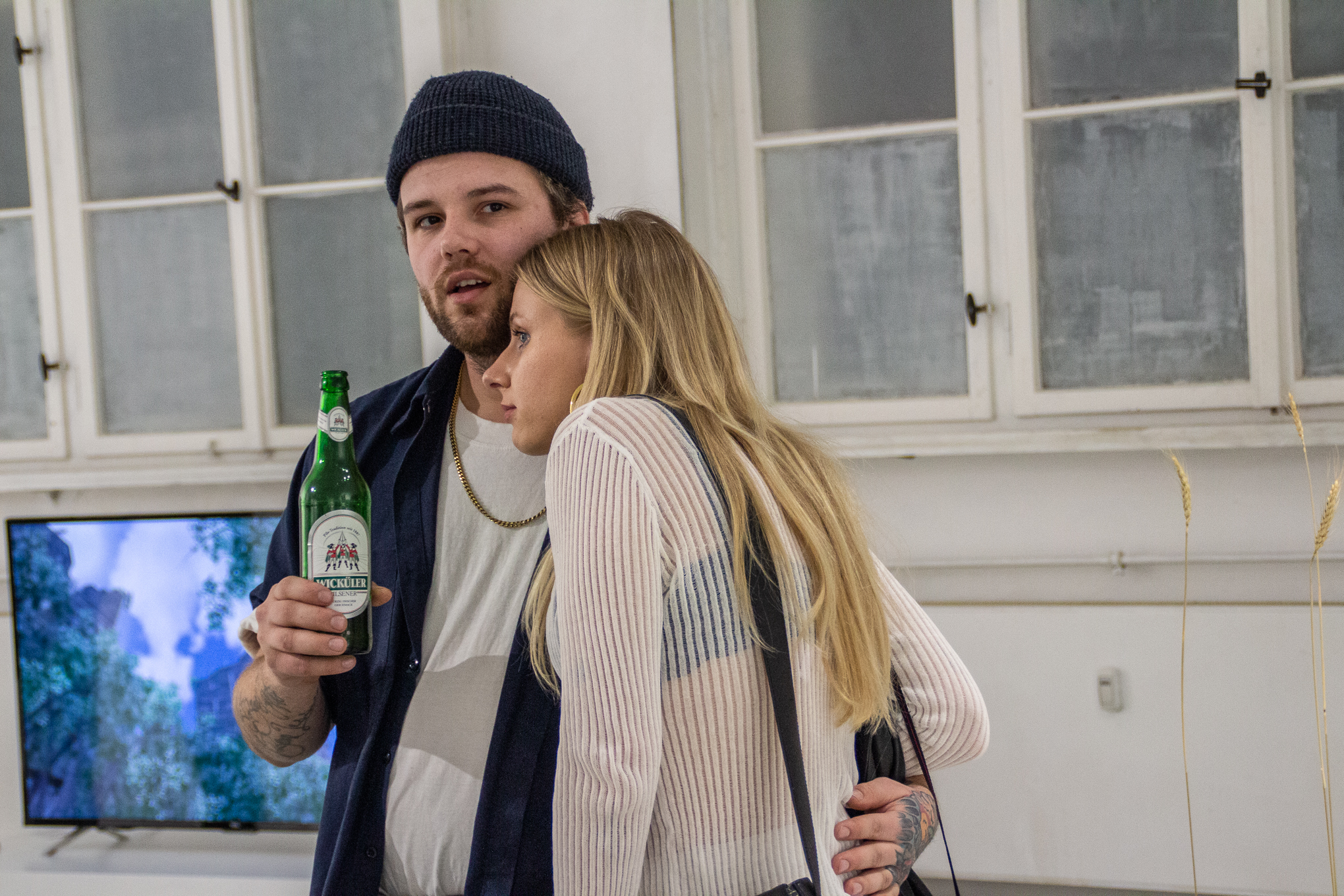 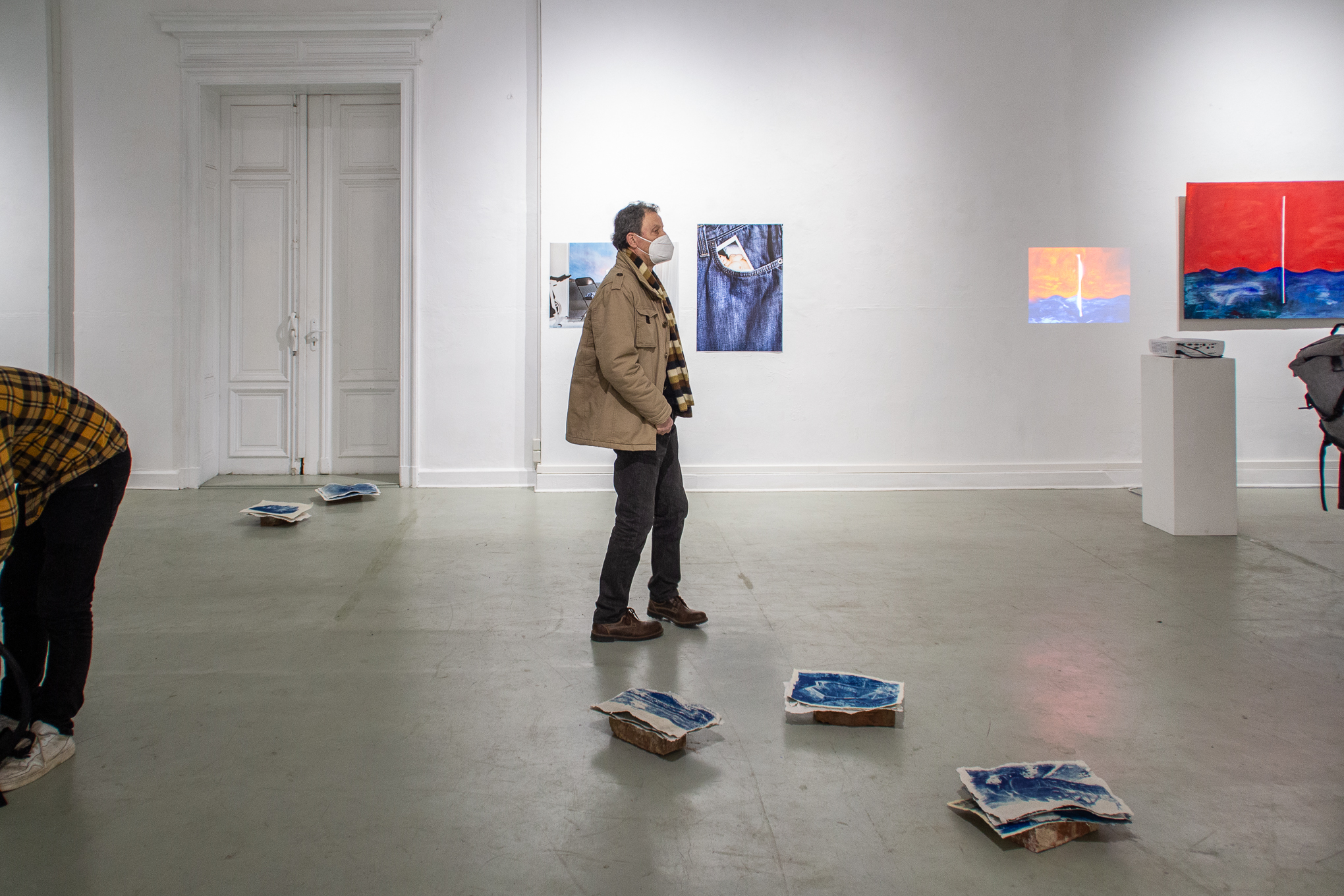 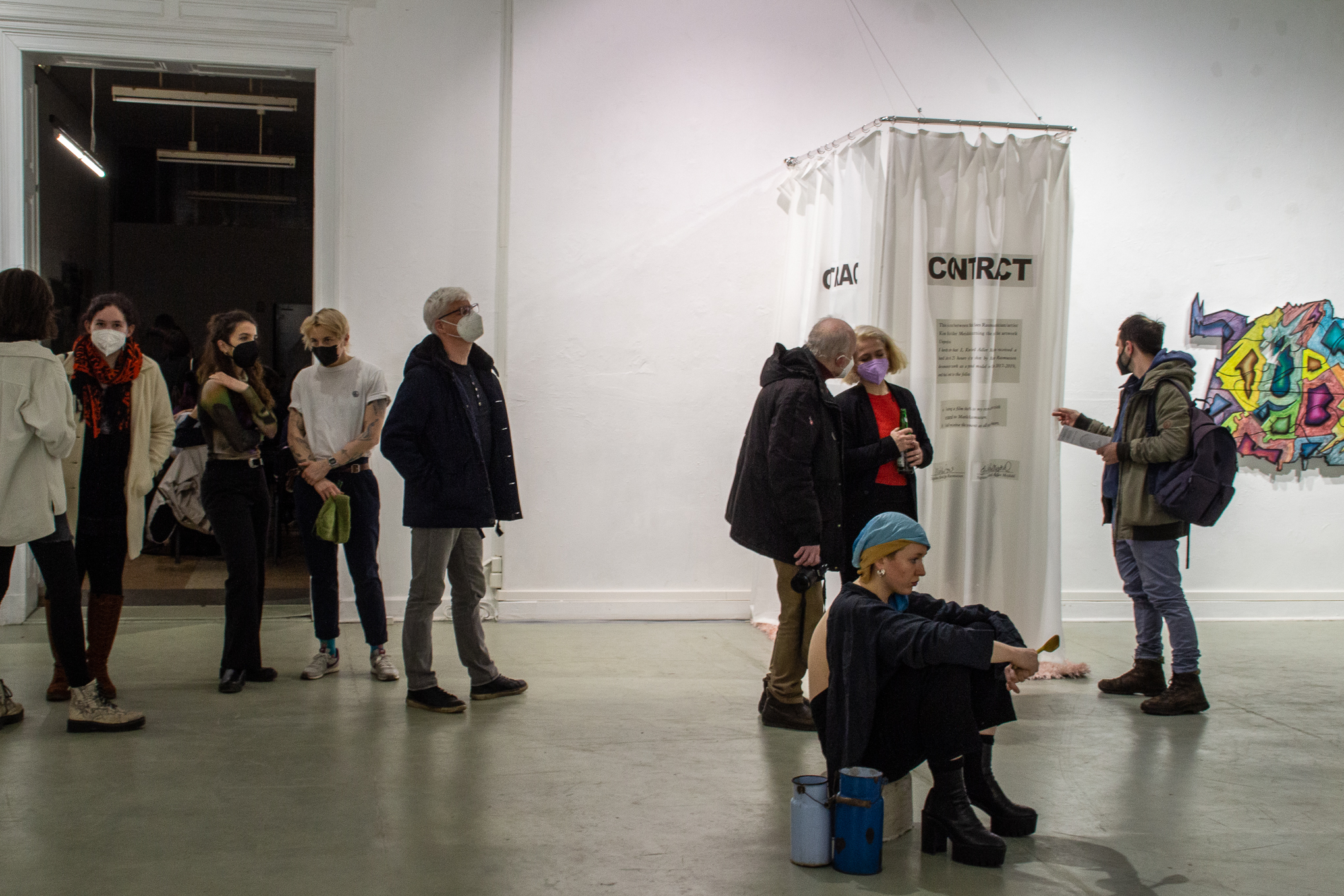 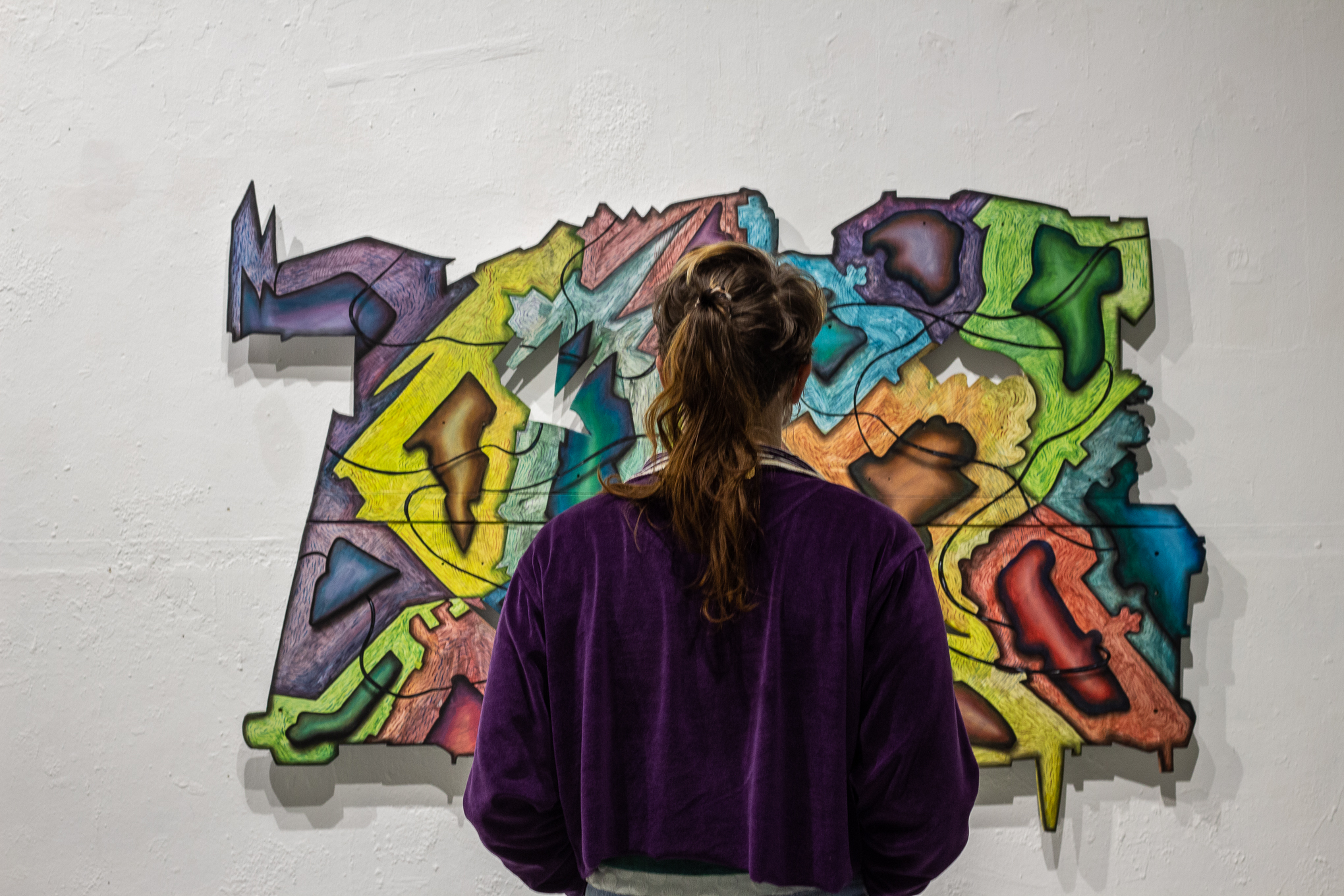 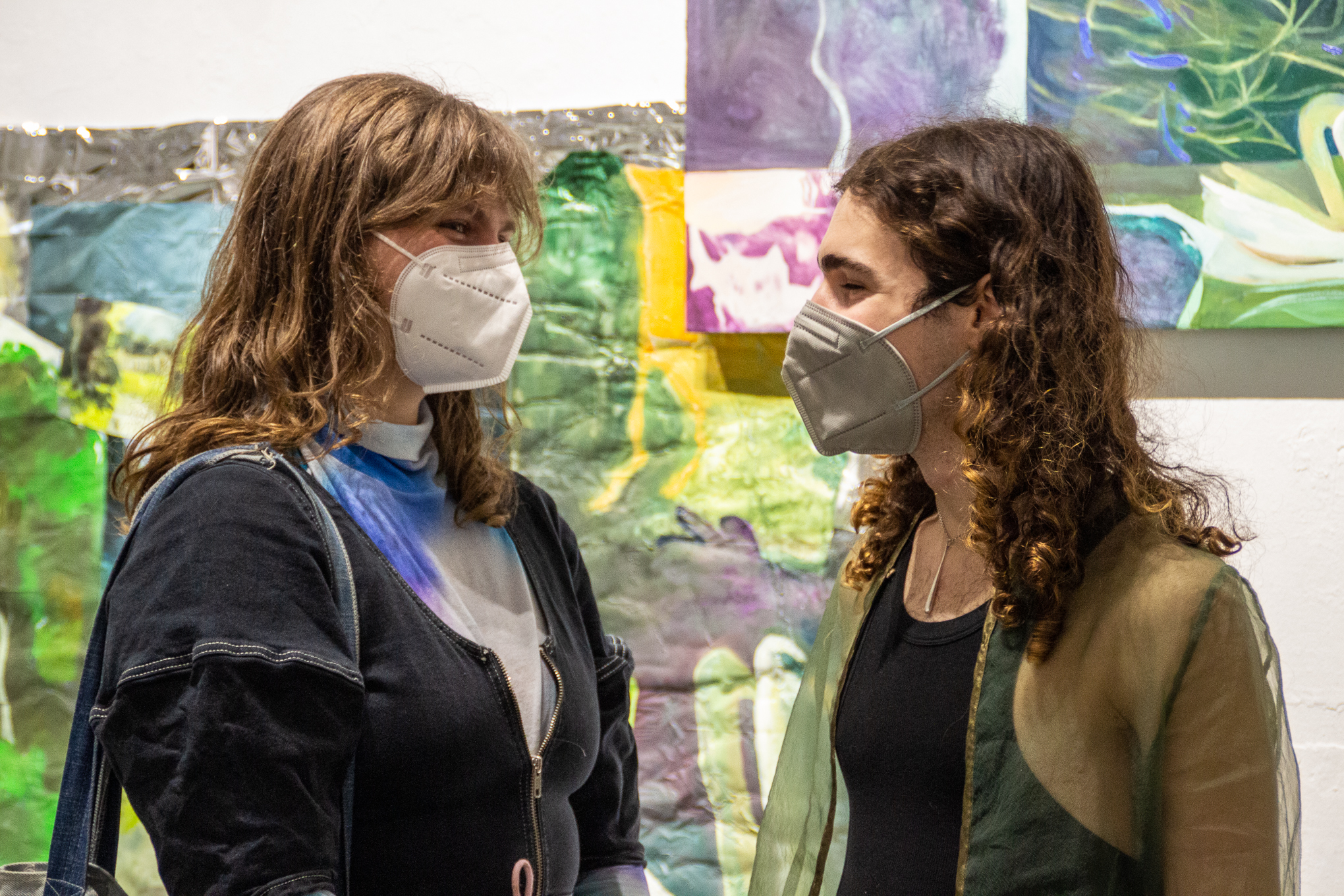 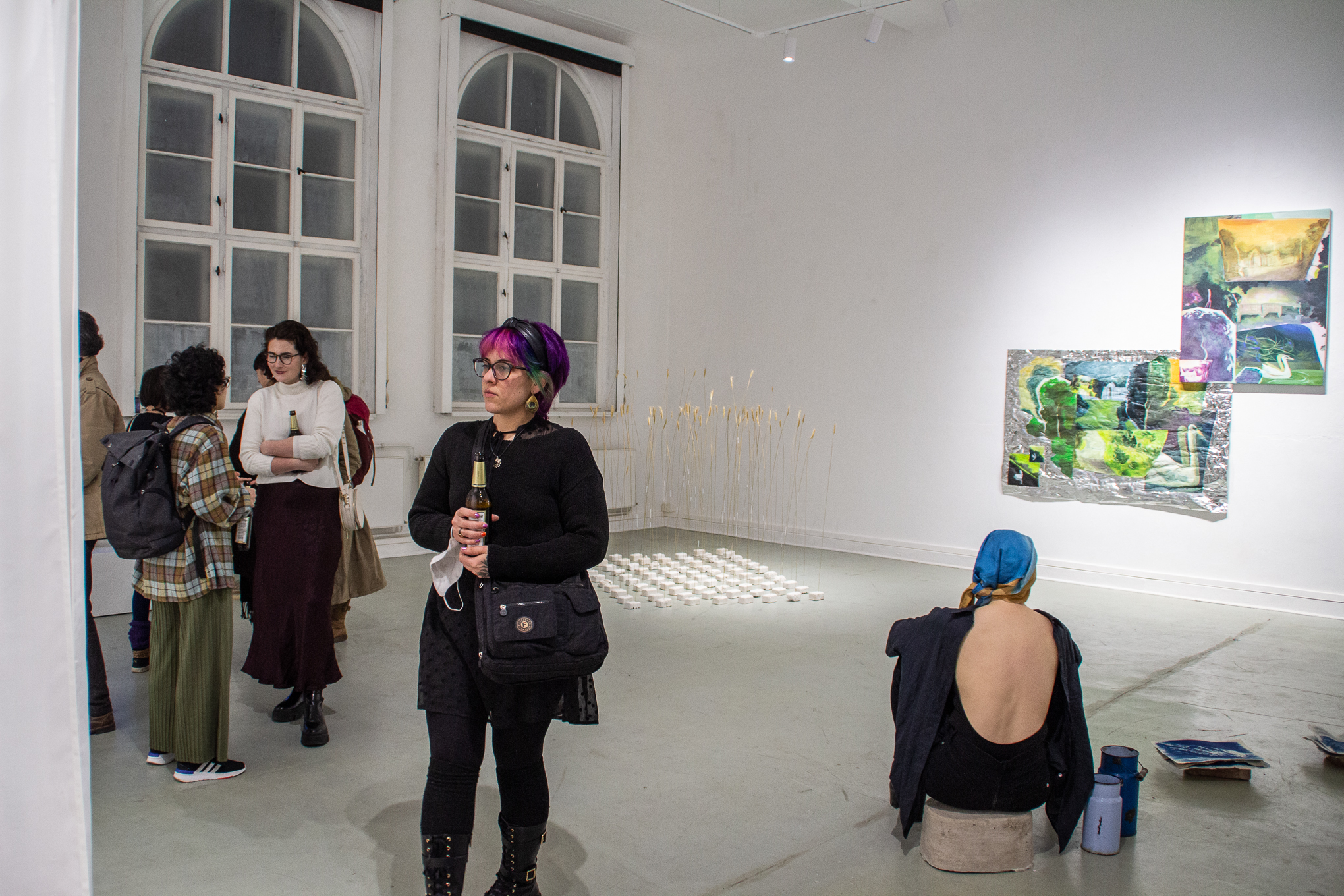 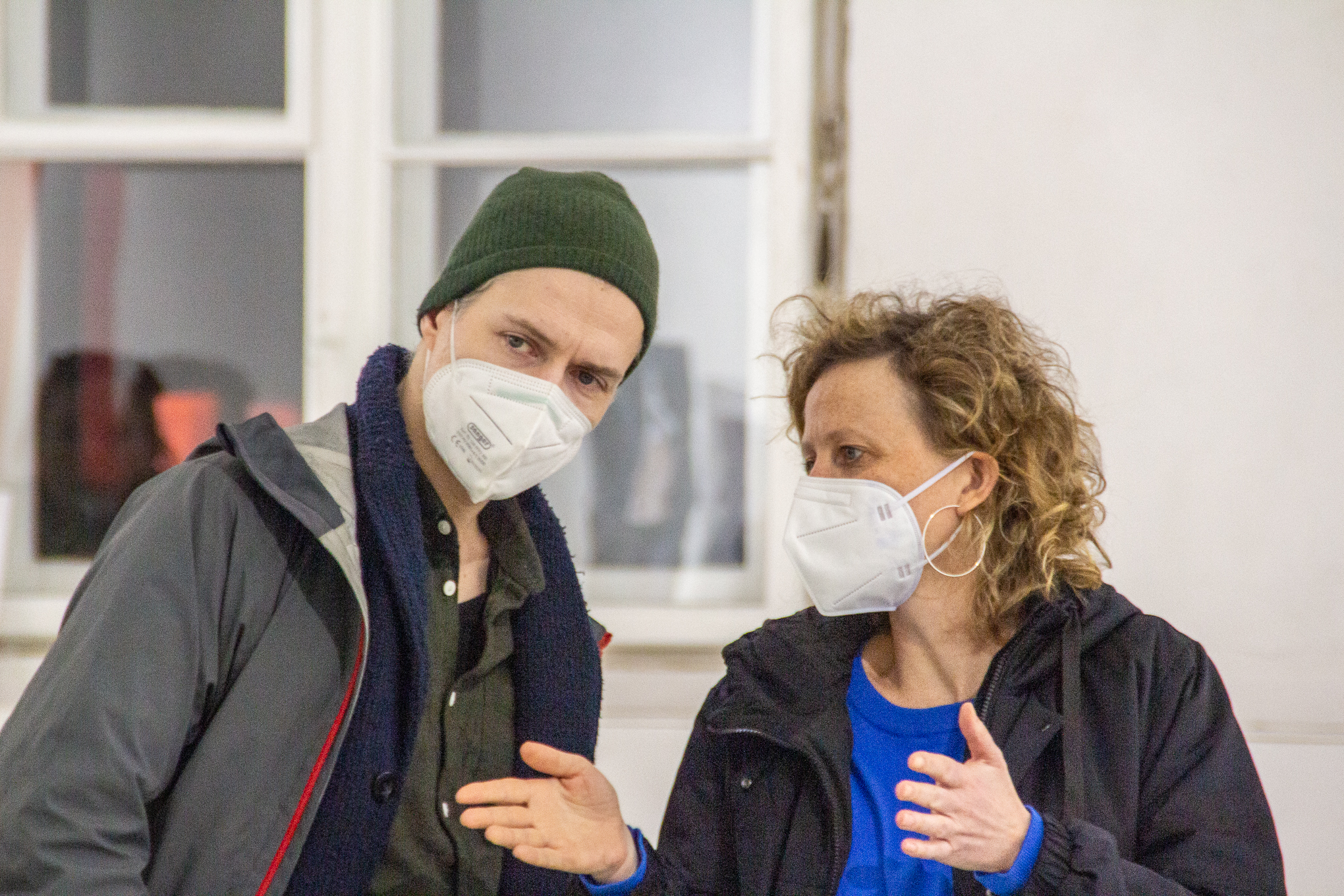 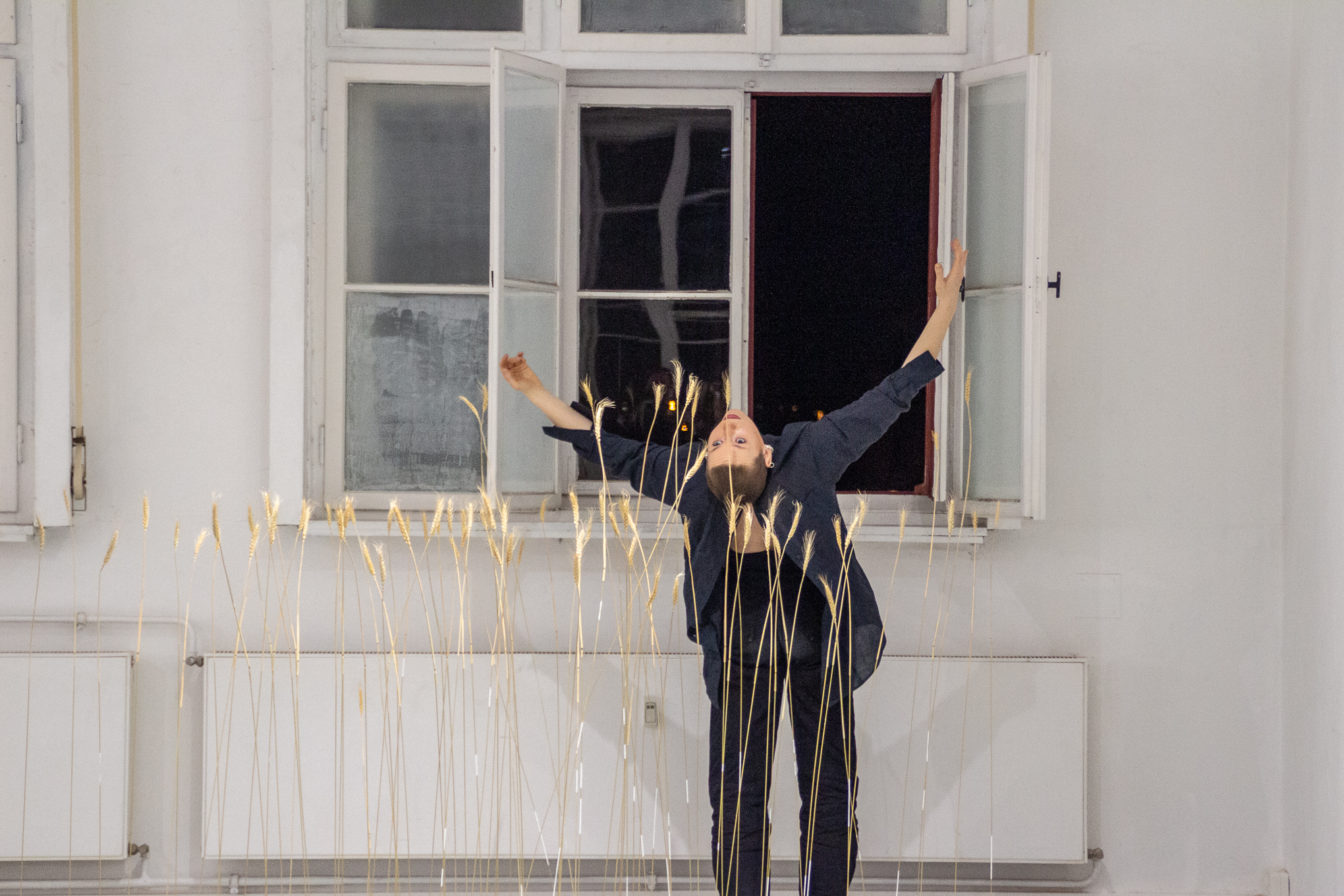 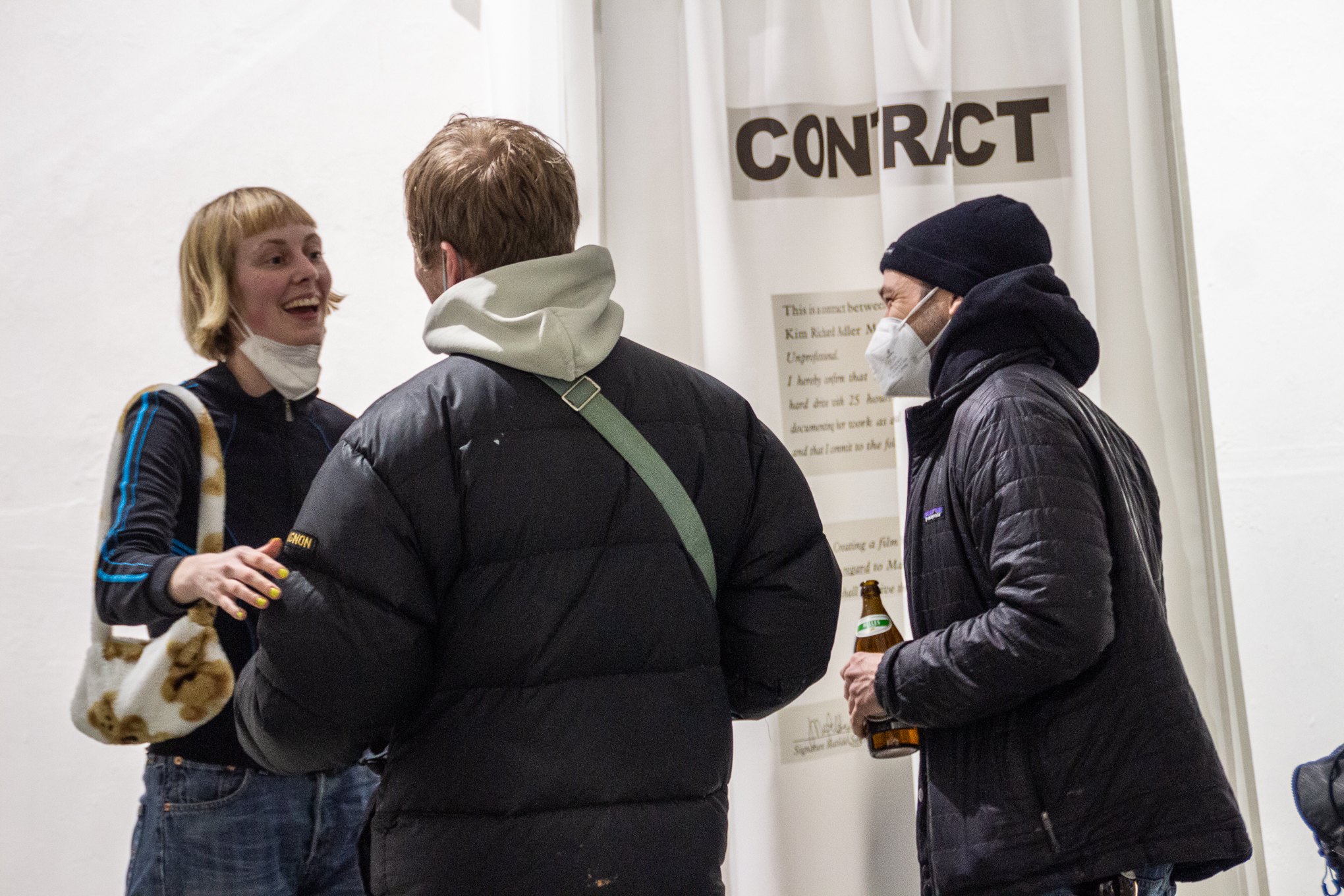 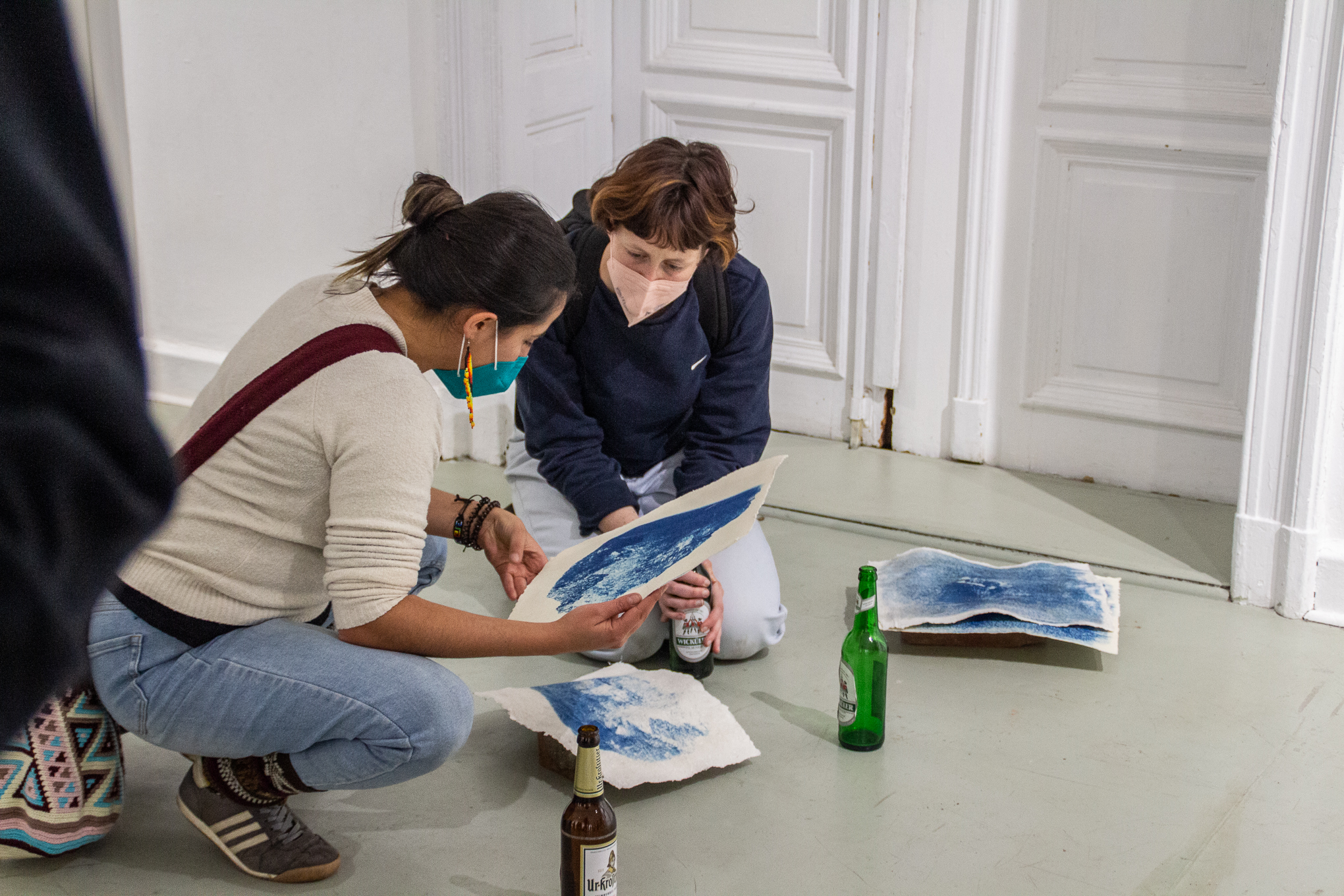 Even though we fade in the totality of the universe, that doesn’t stop us from pursuing our grandiose destructive dreams. In cyanotypes scattered throughout the exhibition space, Fanni Papp showcases how we exploit our environment to create juice to fuel our digital reality. Fanni’s work showcases the changing landscape, humanity as a species capable to dramatically alter and colonise its surroundings for the idea of progress, despite its destructive affect on humans and other life forms.

Humans are a strange creatures, working to make life better, bigger, newer. However, there are some of us that refuse to give in to the false promises of capitalism. Such is Janne Steinhardt’s performance  –  a family history in which a decision is made to pursue a life path of your own. Maybe rather than chasing the dream, the answer lies within.

Stability will come in the end when we meditate on finding our innermost selves, as in Nori Blume’s works. They contrast the digital moving image with a painted one to invite a physical response from the viewer. At first glance both appear stable. Being present, here, being serene, standing still, by balancing you will find your core.