Carlos Molina started out painting. Its classical technique of representing specific objects or landscapes demands the usage of certain methods. Once in a while, the possibilities given by this approach are insufficient. For this reason, Carlos hunts for his very own technique. By bringing distinctive material to work, he begins to explore obscure methods and possibilities the substance gives. Thus, he starts to destroy.

“Normally it’s landscapes”, starts Carlos, the Peruvian artist. Nevertheless, the feeling of being limited by the tool caused him to reach a more sophisticated one. That is why he started his artistic investigation. His very particuliar approach starts with a material. The investigator brings a substance into his studio and then he begins to probe. “The thing is that when you use materials, you start to think. About the other one or maybe you want to build something. You ask what you want to do with this.” Currently, the artist is discovering potentials hidden in wood.

Philosophy of the destruction

What makes his work even more mysterious, is that the artist is unsure about the outcome of the experimentation. Likewise, the form remains unknown, while Carlos didn’t determine a specific one. Nevertheless, the artist unveils a secret – The motif is affiliated with decay and darkness. His approach emerges through systematic burning and destroying the material. Then, by making use of “ruins”, he starts to build. Sometimes, with the help of wax and colofonium, the artist structures his installations. “The idea is to create something through destroying something. For example, I had two logs of wood, by scratching them with a knife, I received all the little wood pieces”, explains Carlos. 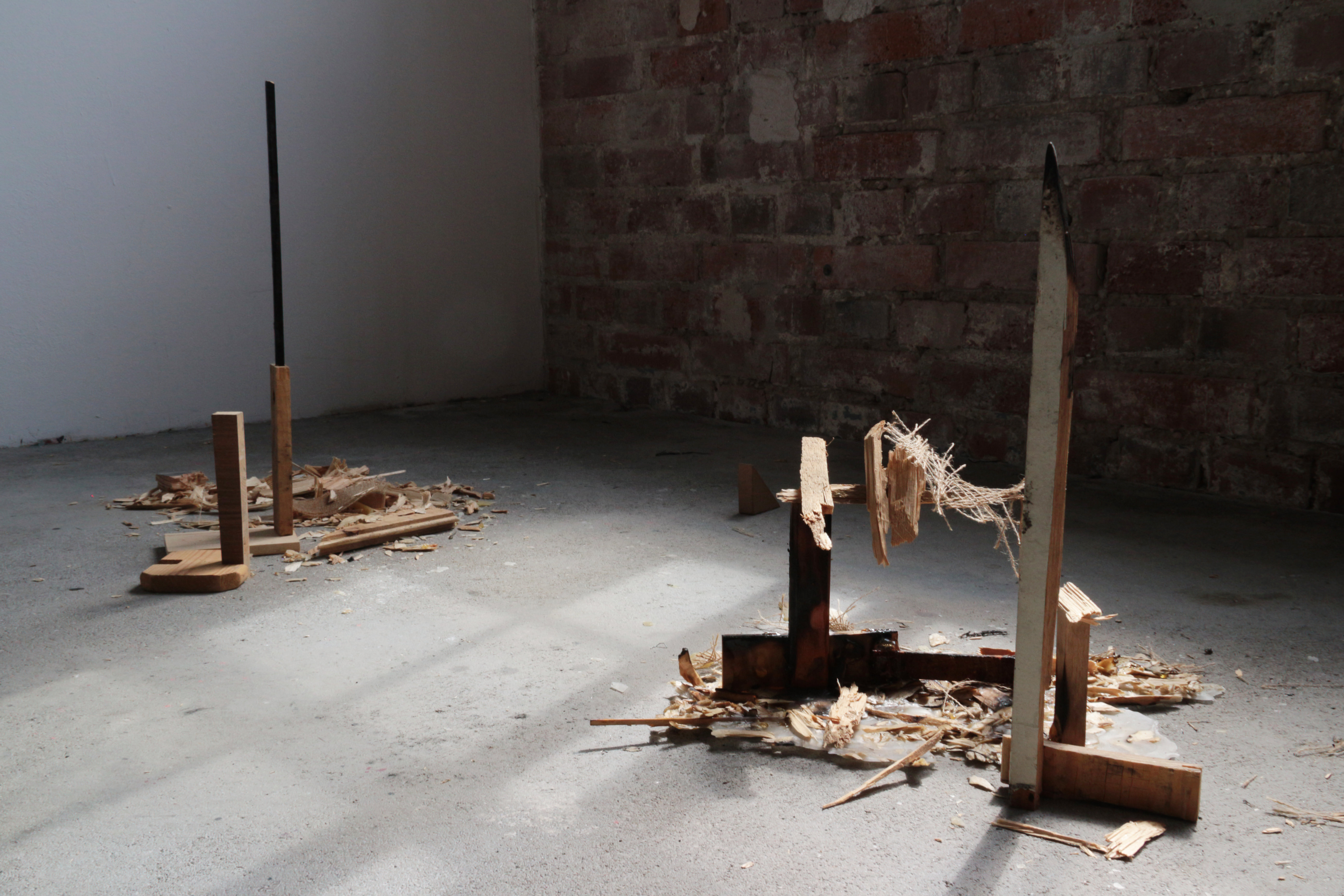 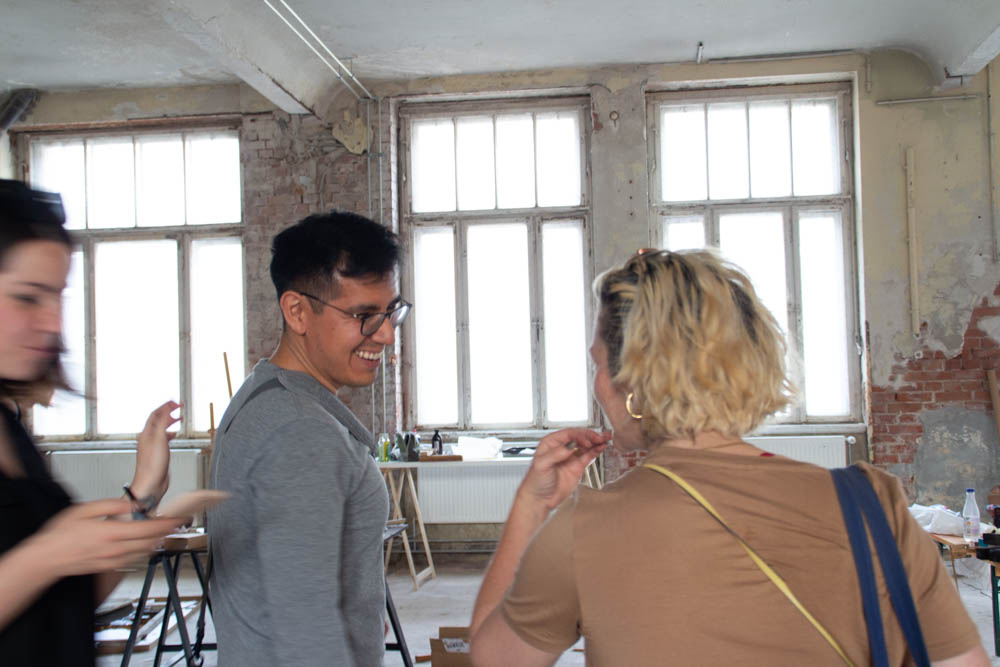 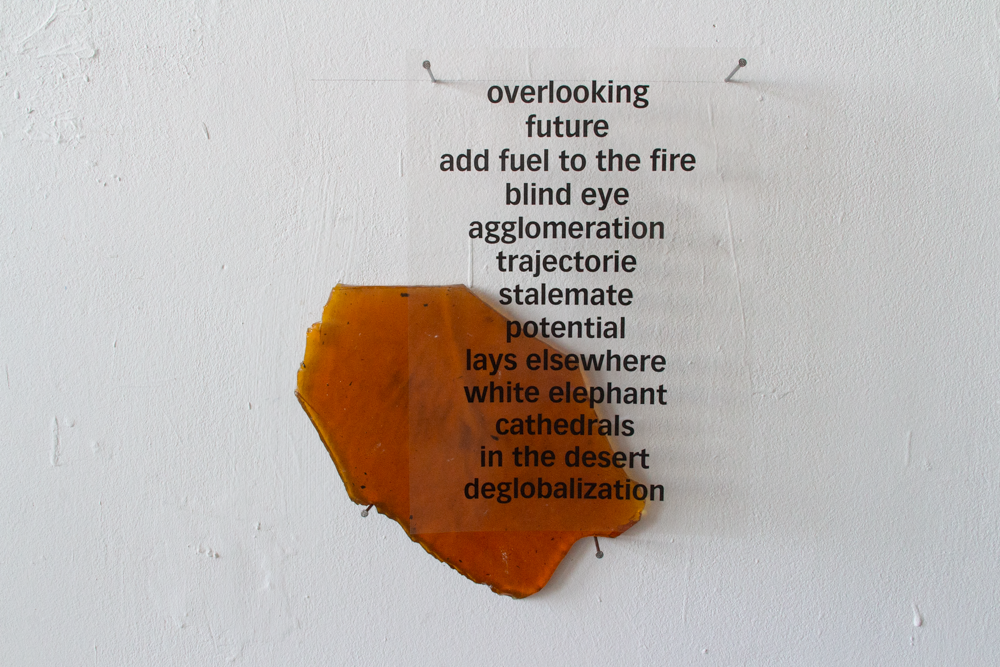 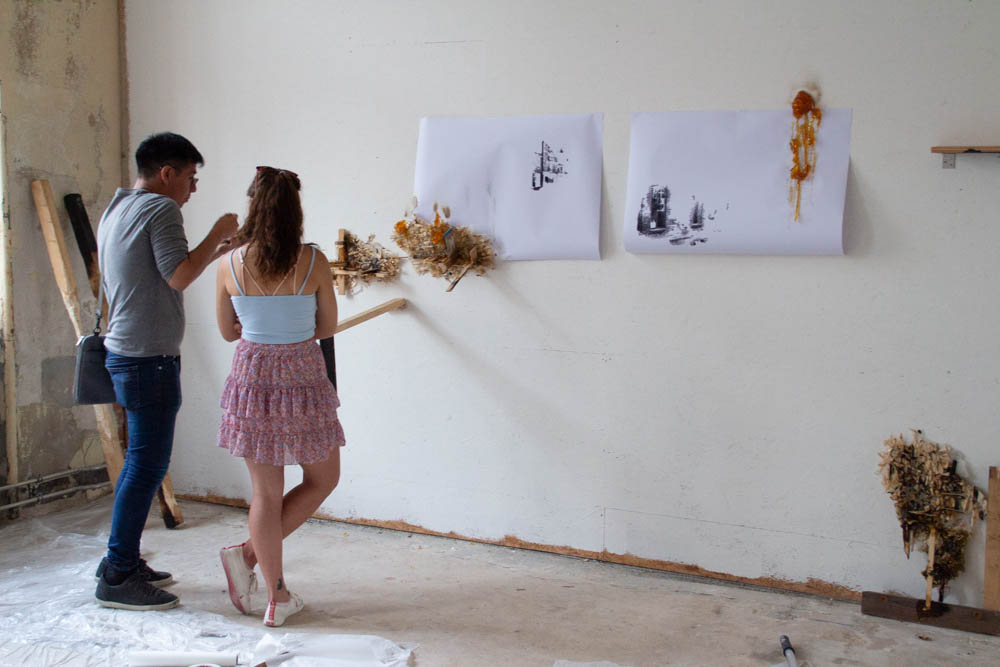 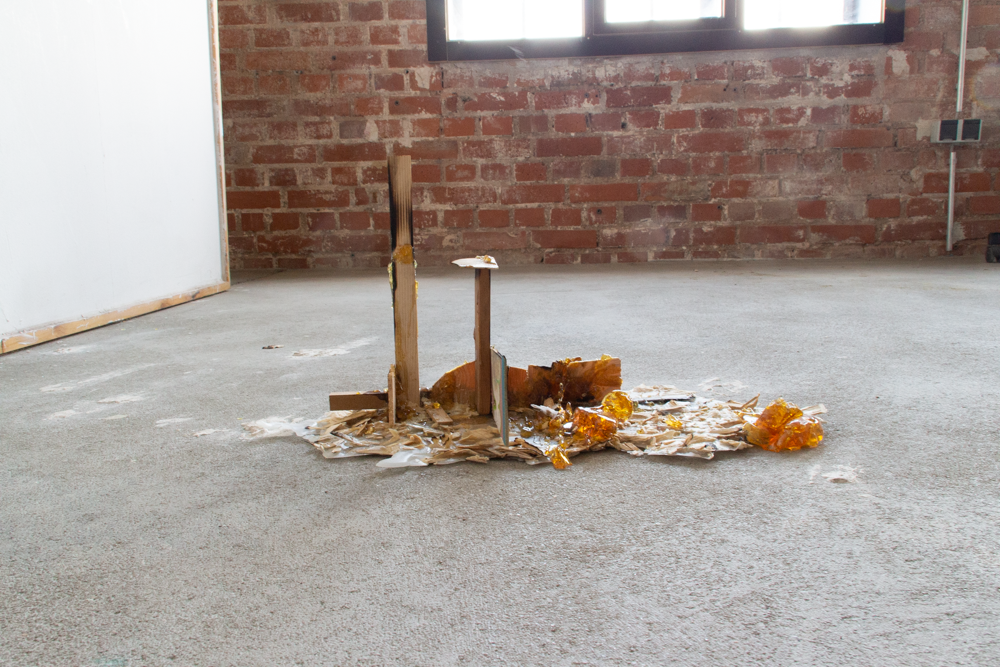 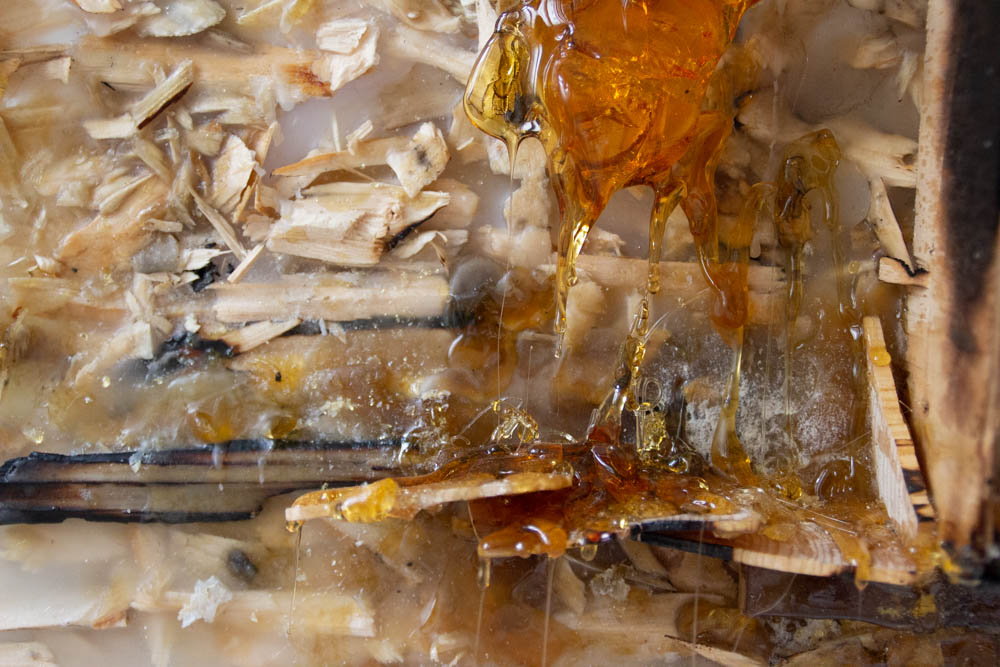 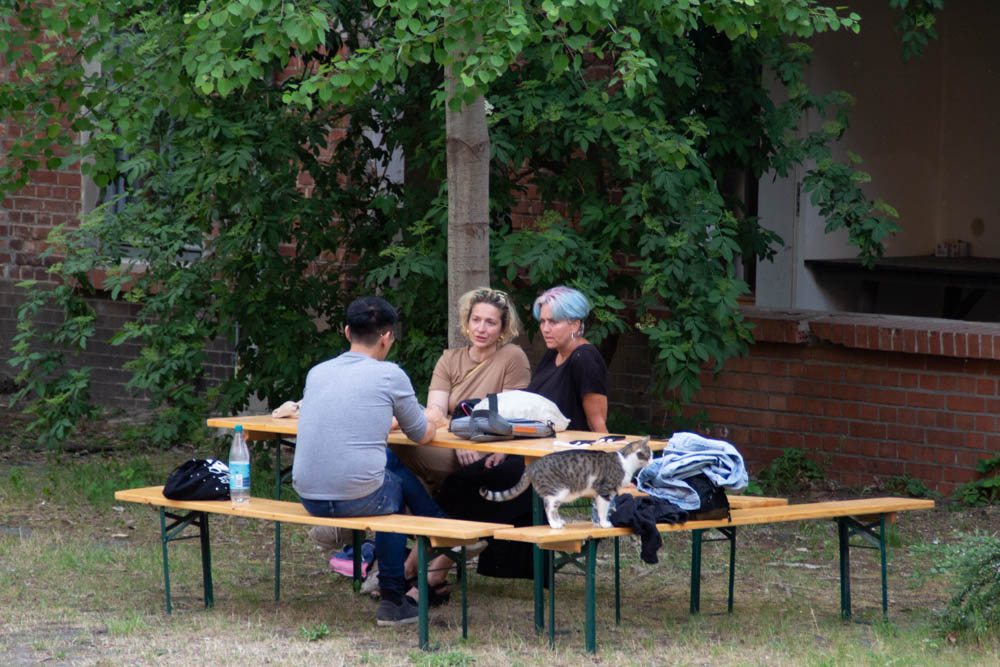 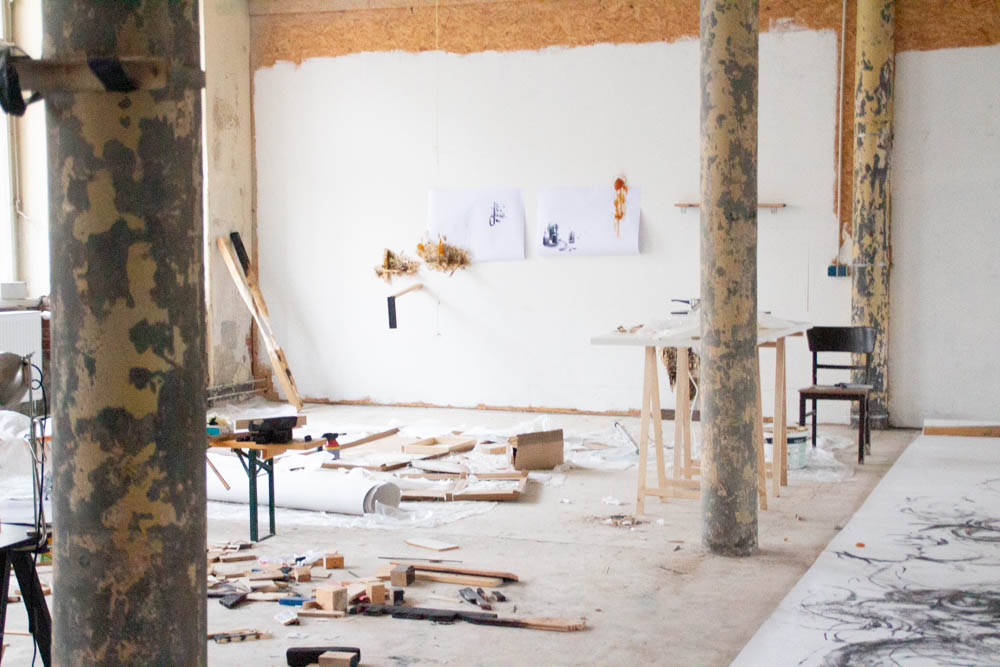 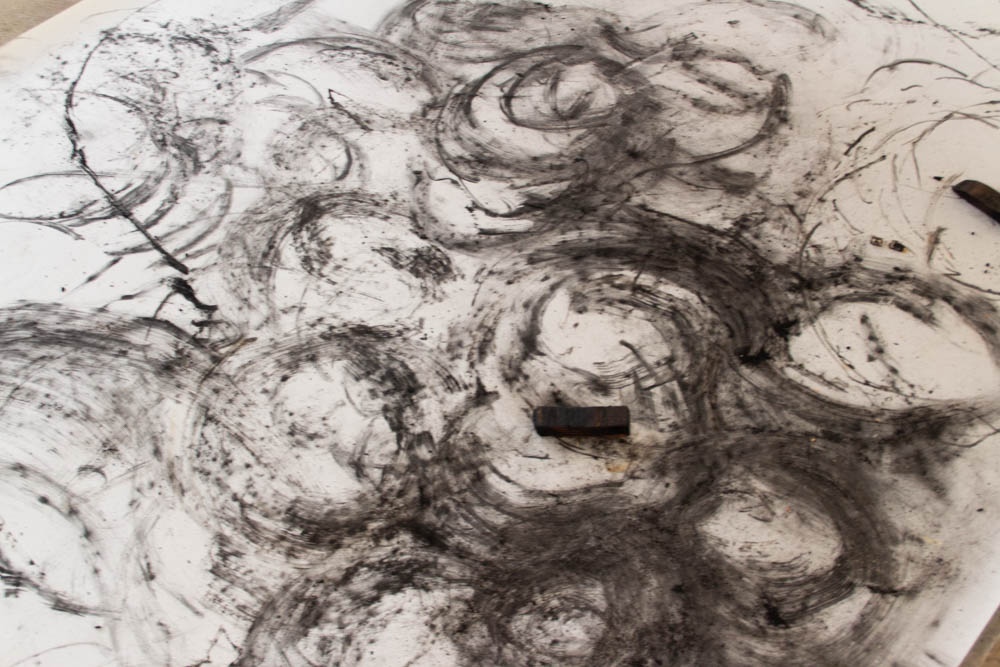 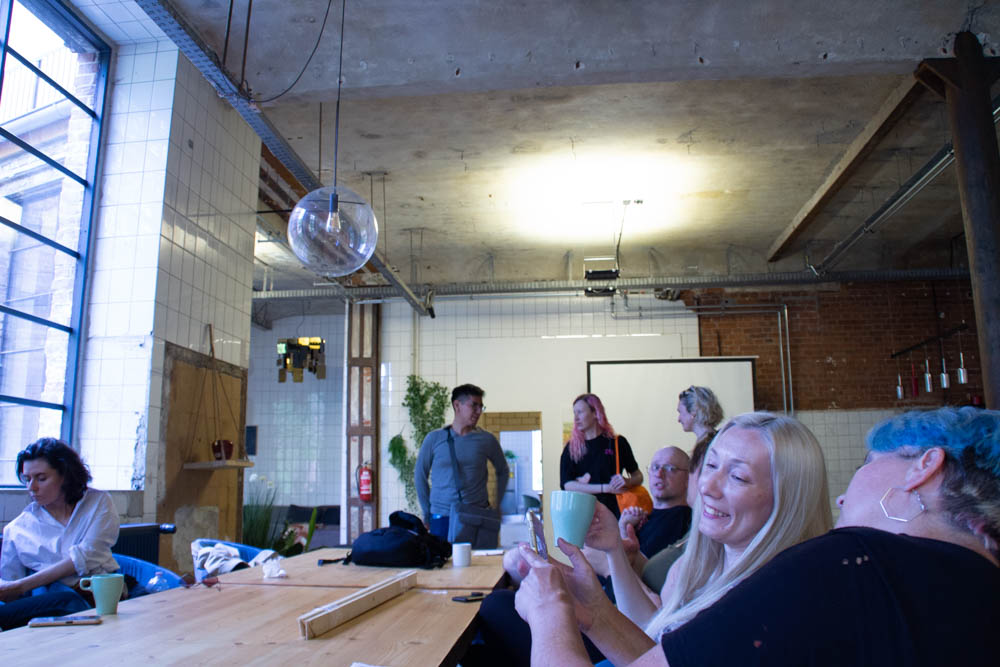 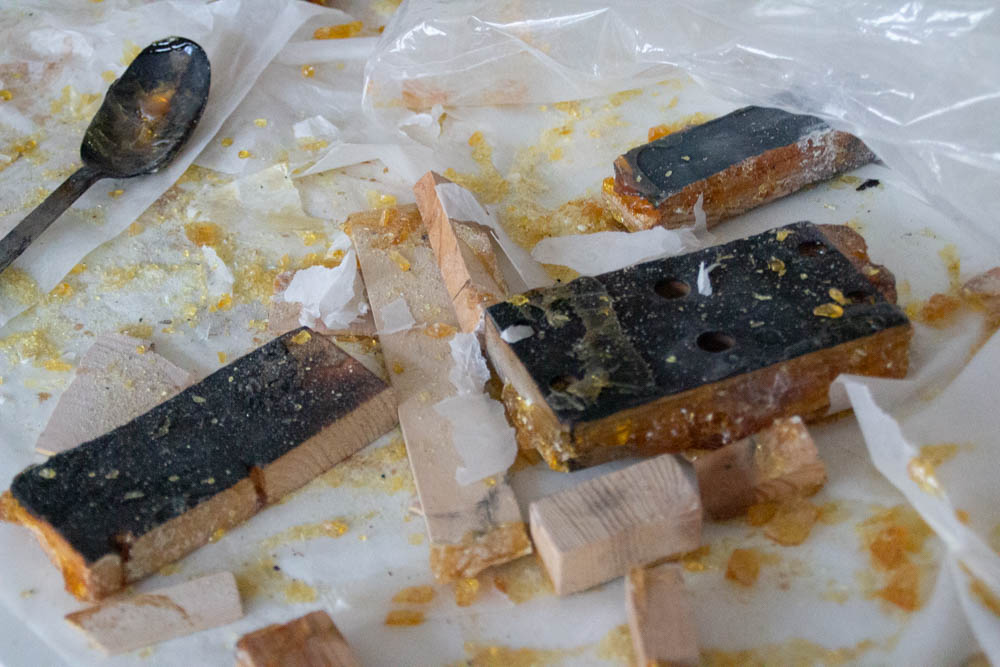 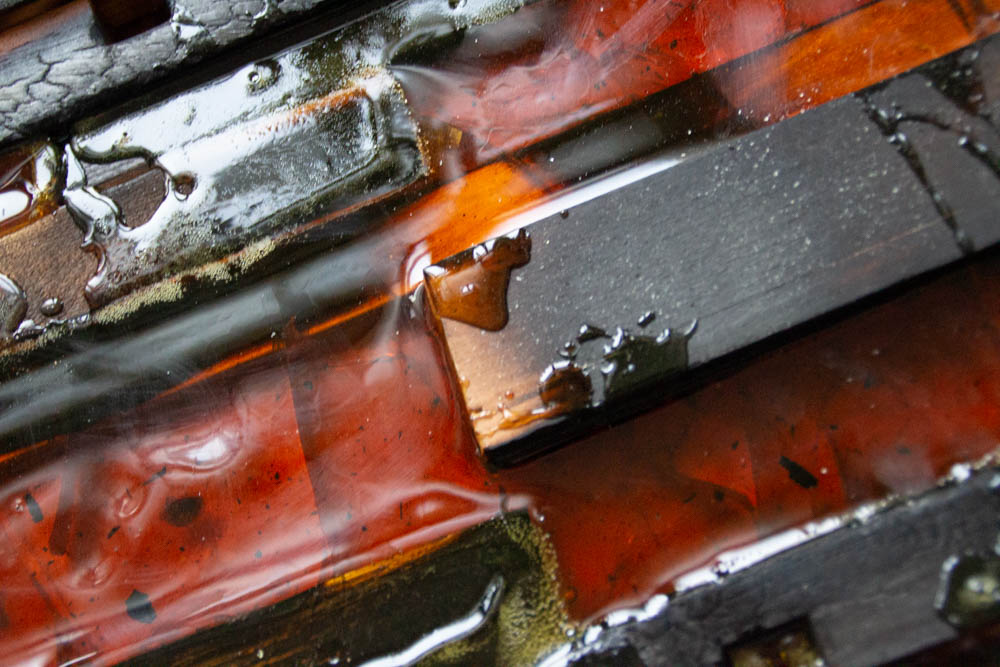 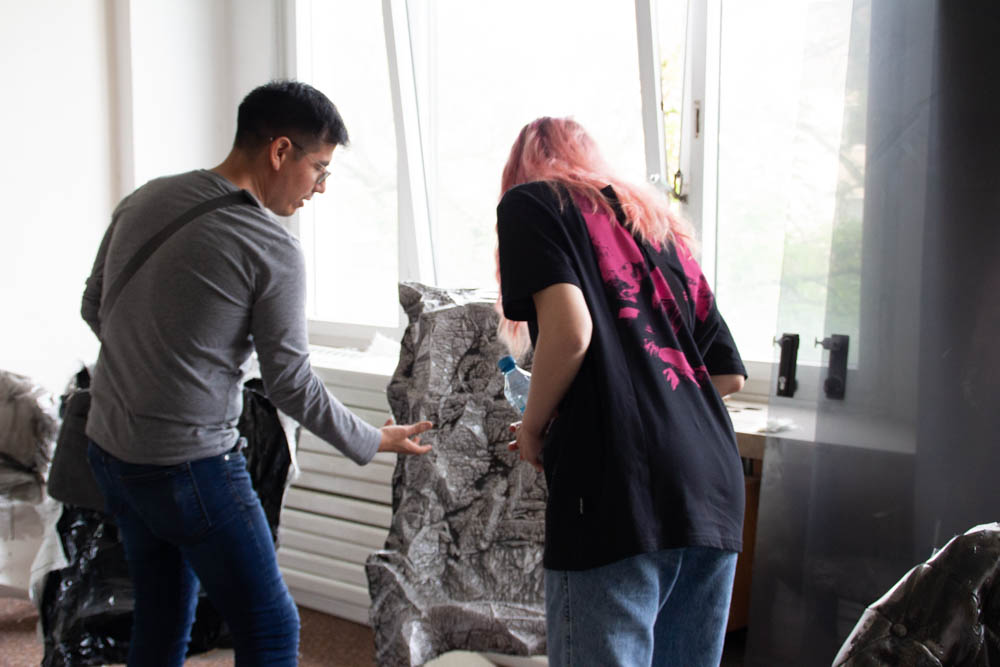 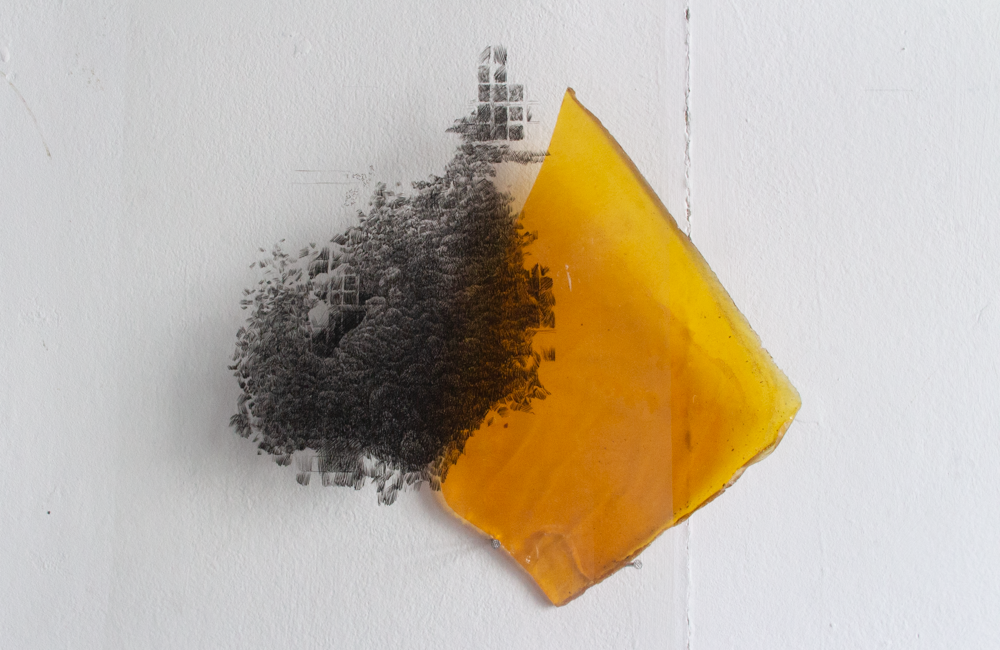 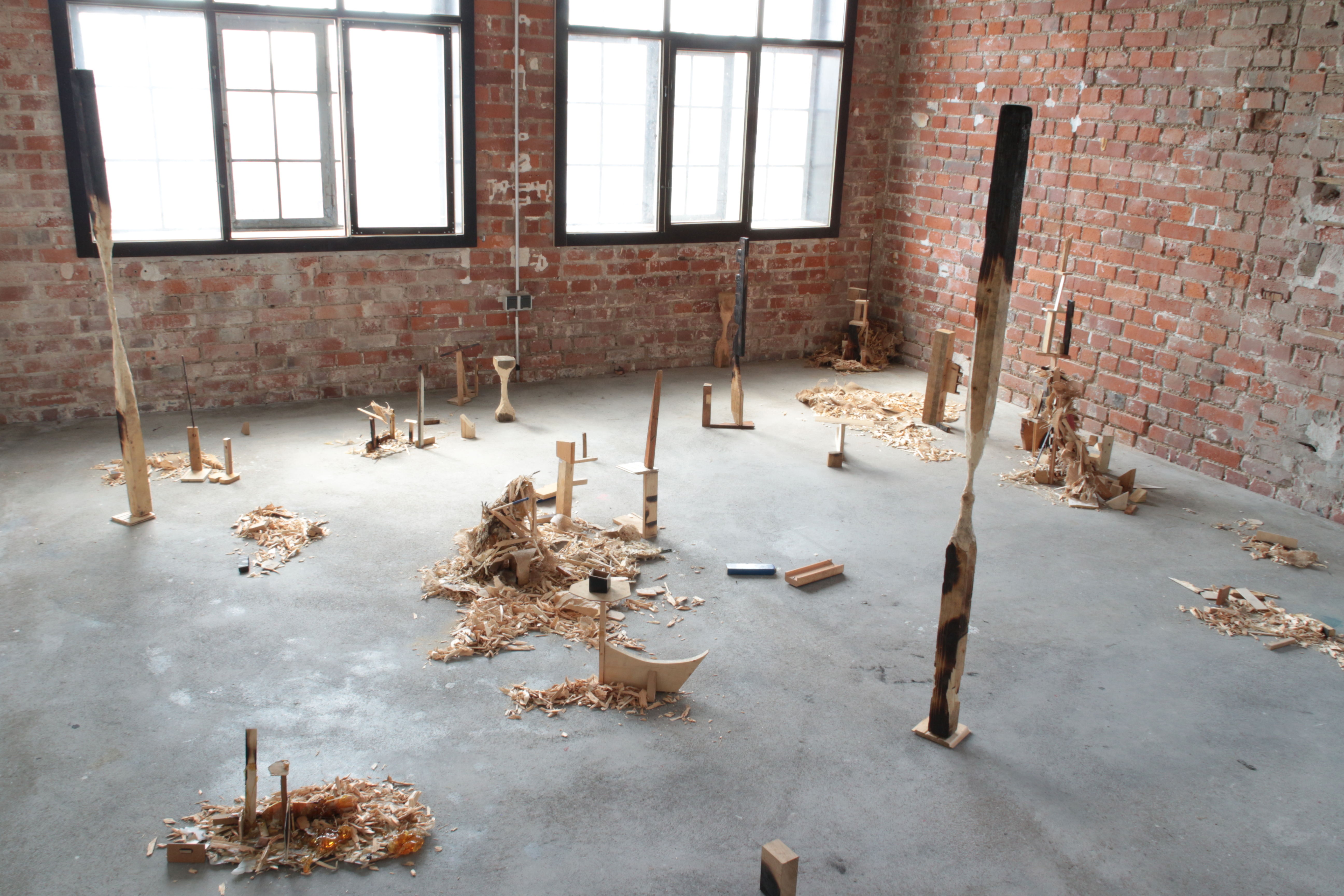 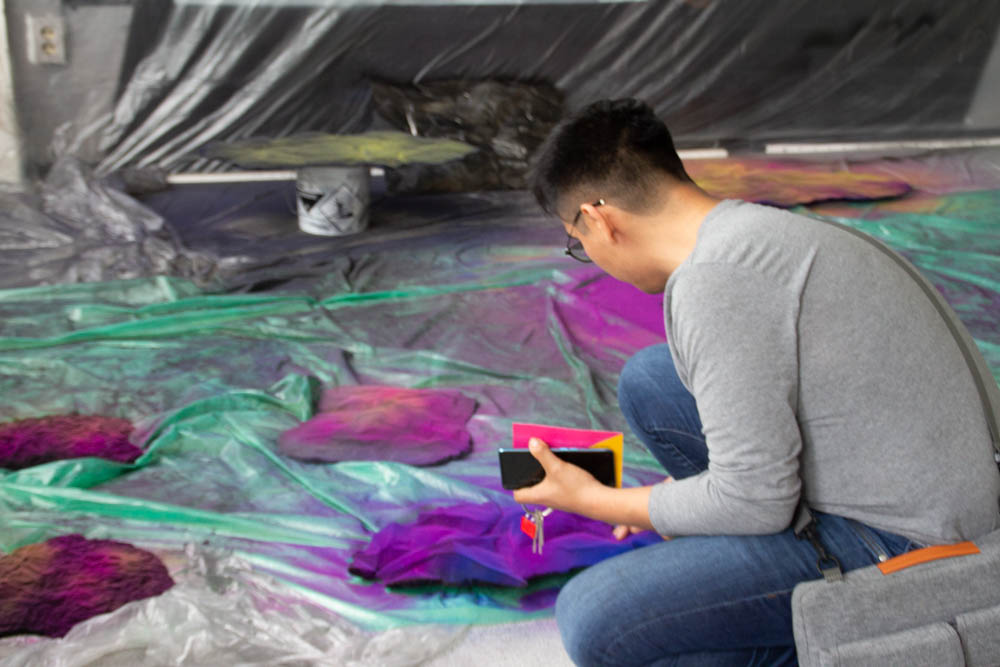 Mixing the little pieces with other materials makes them stronger. Then he layers the mixture on a textile. “Jute textile has a lot of space. It’s possible to bind and mix the wax with wood and make layers and layers. They are like nests”.  For Carlos it has poetical meaning: they resemble old houses, stuffed with recollections. “It brings memories. Imagine a nest. It is always something like a net of memories.” In that matter, creating a socket, either assembling a sculpture representing one, emerges as something very intimate.

The palace for lost souls

Carlos’ fascination with the idea of space as a home doesn’t materialize only by metaphorical means. The artist was mesmerized by the story of a castle of a soul who desired to display a romantic idea via building. “Your soul is like a castle which has many rooms and each of them has a different meaning. You have to visit them yourself to uncover,” he explains.

The other part of his work occurs with the illusion of a drawing. Even though the sketches accompany the sculptures, they are not always associated with them. Thus, the most recent ones resemble obscure nests. Furthermore, some of the poetic paintings appear even more interesting because of their organic form. In addition, when it comes to illustration and nature, the fantasy of Carlos’ artistic expression has no limits.

If the species could speak, what would they say?

The painter carried out the project, aroused from his interest in science fiction, joined with sociological theories. Through this work, he’s adding his voice to the debate about climate change and the meaning of the ecosystem. The herbarium is a project that deals with the transformation of vegetation into weapons. In a forest, plants have taken on forms of artillery and weapons of mass destruction, and their ultimate goal is to destroy humanity.”                          First were writings about plants which conquer the world, while industry remains devastating the planet. The narration expands in the visualization.

Carlos’ artwork undoubtedly appears as an imaginative and intriguing one. His interest in the origin of sci-fi and its relation to the ideas of society captivates. His obscure and metaphorical models beg meditation. As far as his fantasy reaches, curiosity arouses. Expecting the results of his investigation, we get a look-into his visionary world at Pilotenkueche.

Keep up to date with Carlo’s work on his Instagram. As a International resident, his work was shown in Leipzig.