I smile each time I walk past Joongok Kim’s studio. Often I have to stop and take it all in. It is full of happy vibrant colors and flying dogs. You can tell the velocity by the positioning of their ears. A really fast dog’s ears sweep across their face as the g-force causes them to bend. I see Joongok’s figures as modern day super heroes who are fighting anti-Asian racism by dispelling stereotypes.

What is Joongok’s experience with dogs and why does she paint them? This artistic journey began with a photo of her own shadow. Her hair fell is such a way that it looked like dog ears. She was living in the very dog friendly city of Berlin at the time. She had close friends with dogs who were valued members of the family.

This canine equal treatment was something alien to her upbringing in the Korean countryside. A traumatic childhood experience had caused her to distance herself from dogs. She used to play with her grandfather’s dog Poppi. One day her grandfather gave Poppi to a relative. Joongok witnessed the relative killing it for the meat. 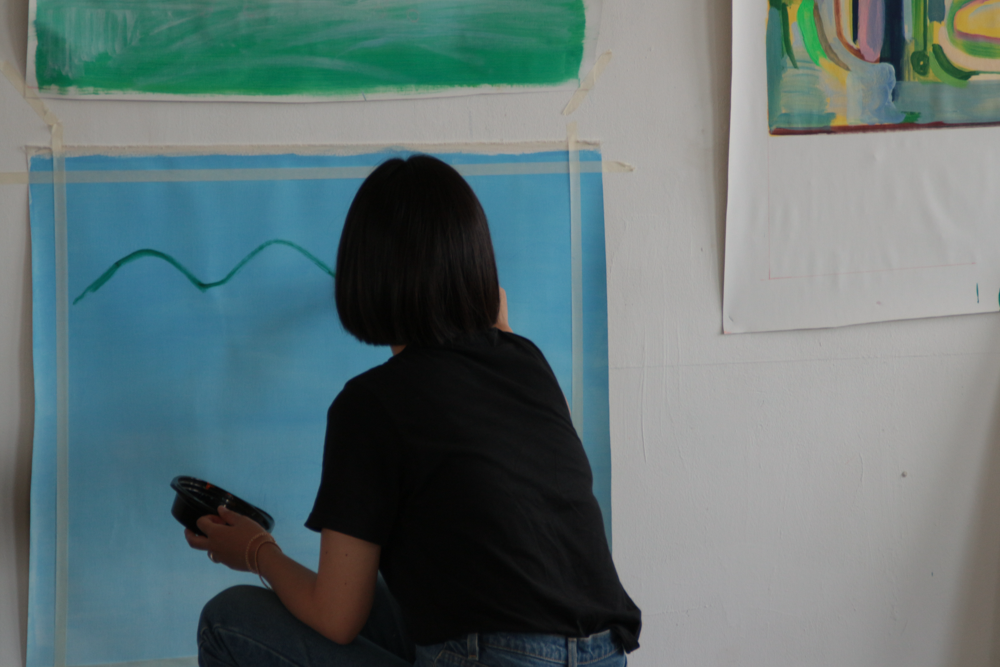 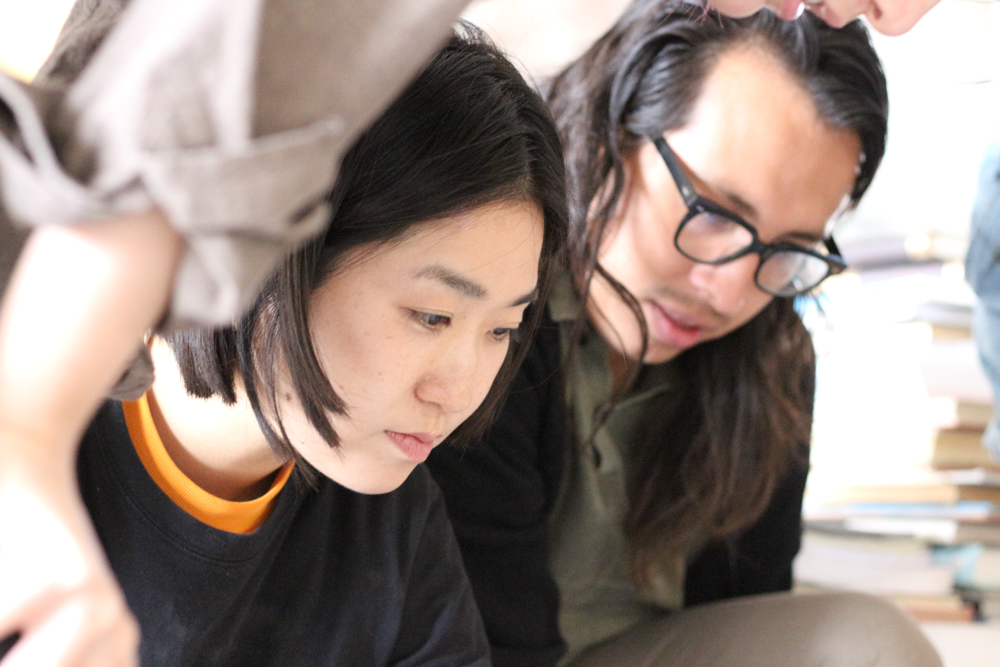 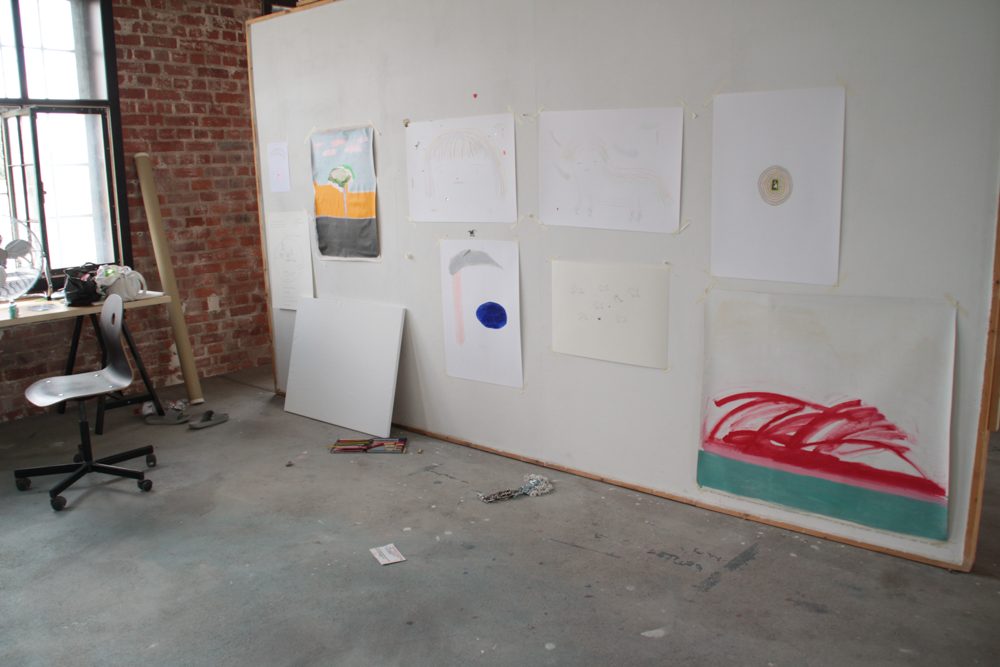 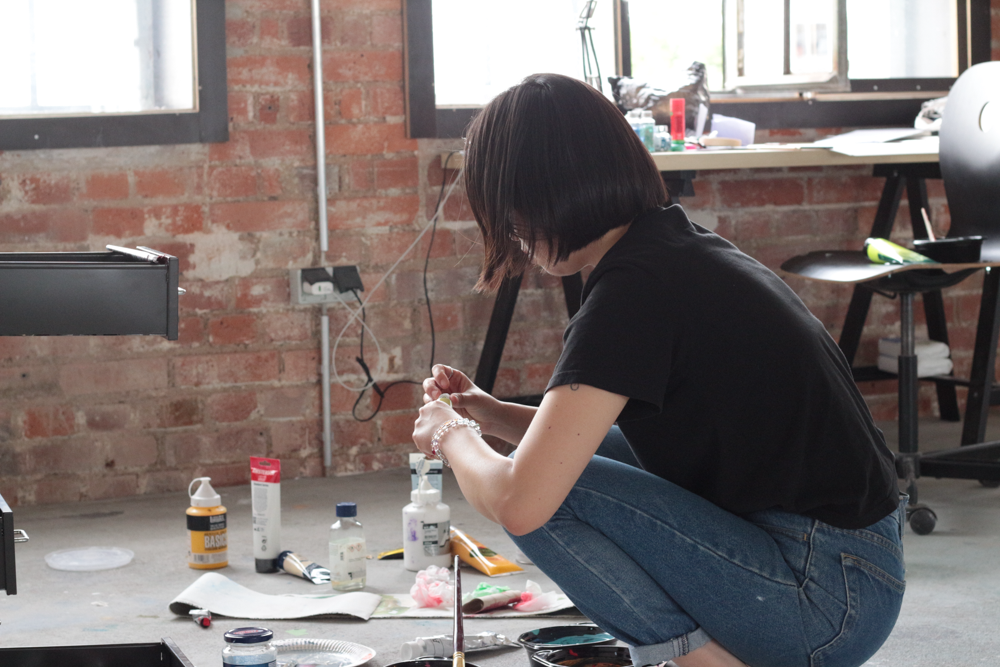 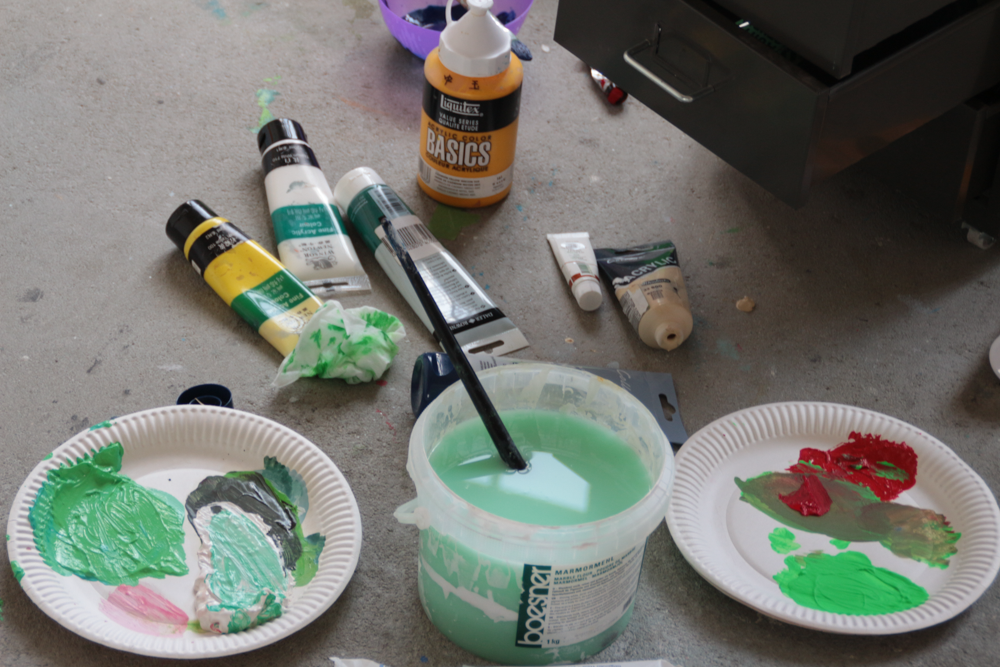 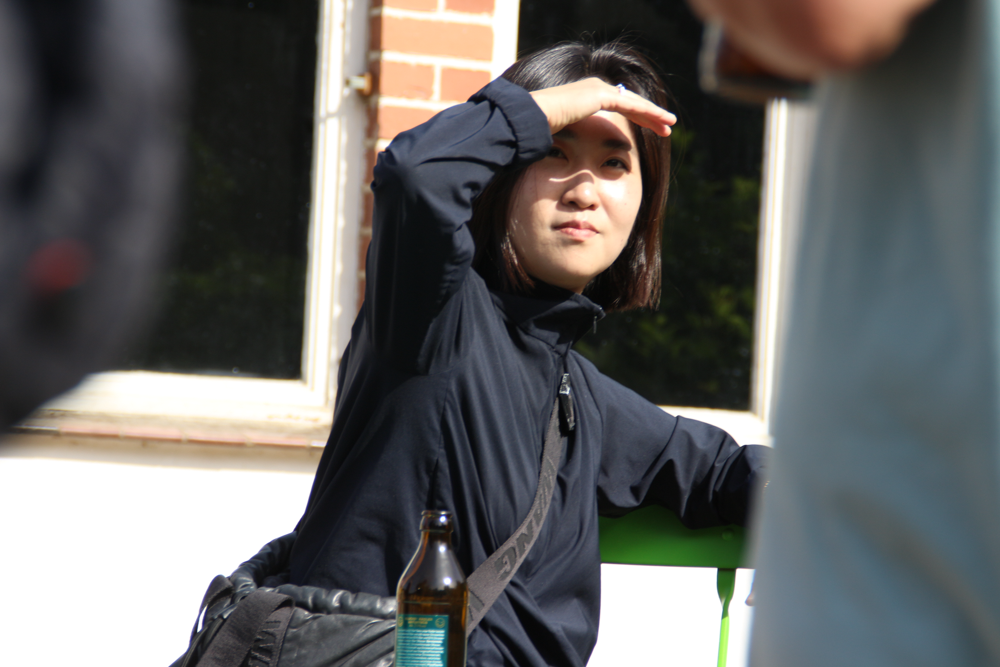 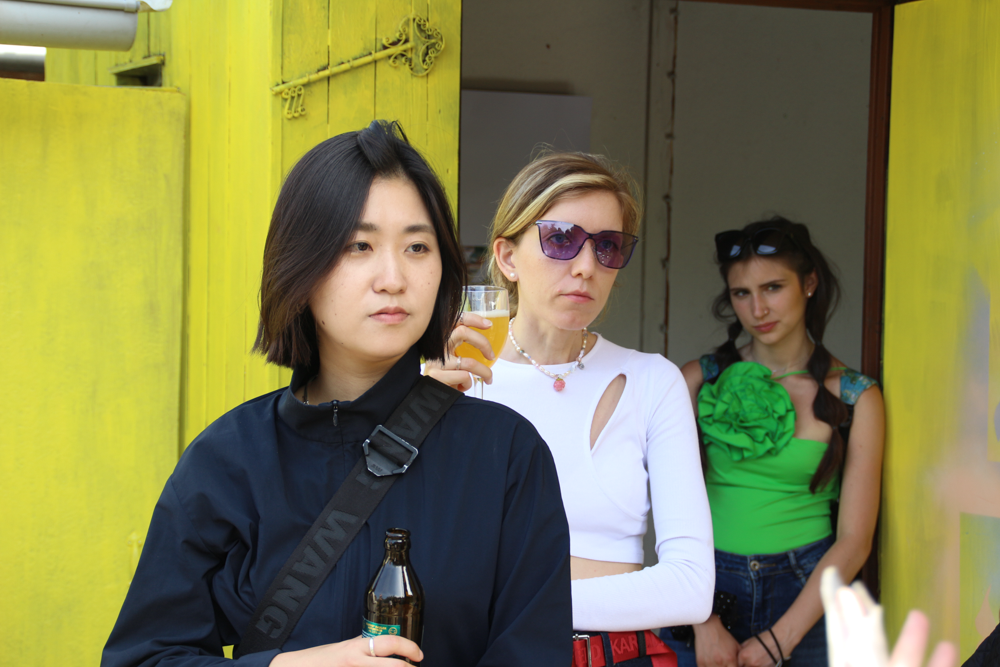 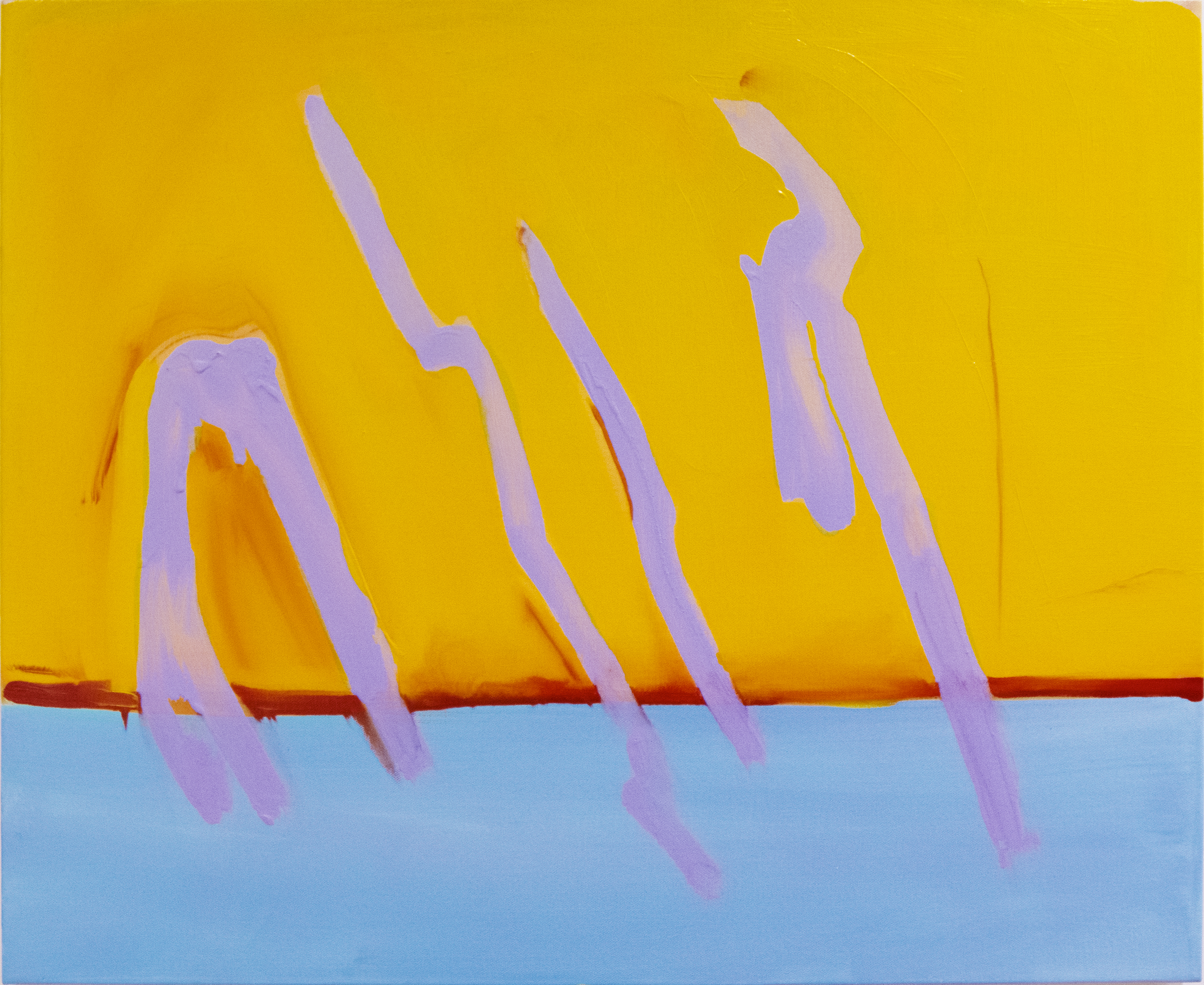 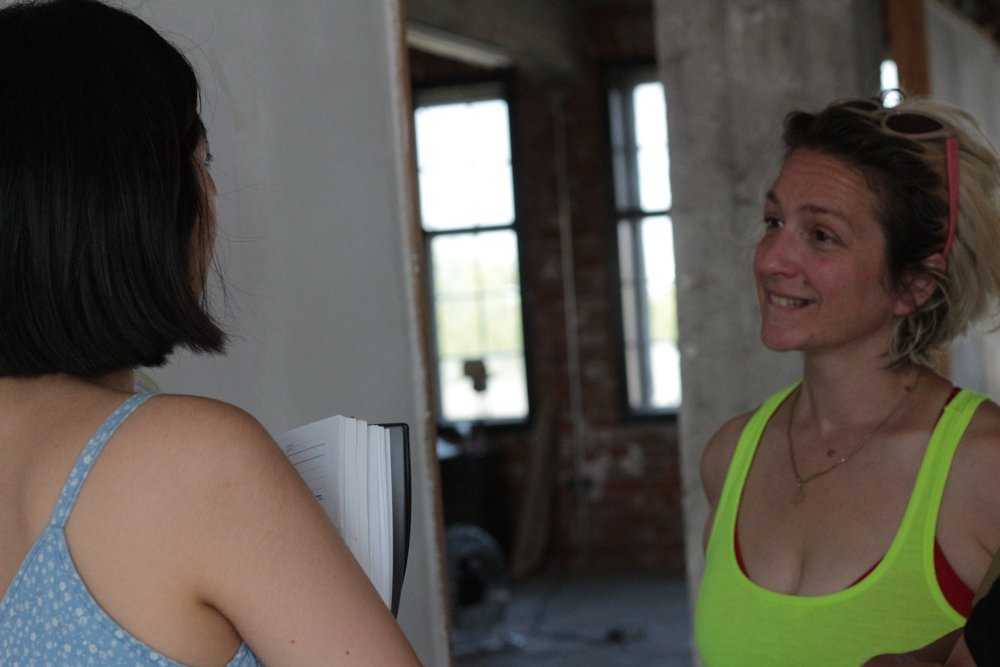 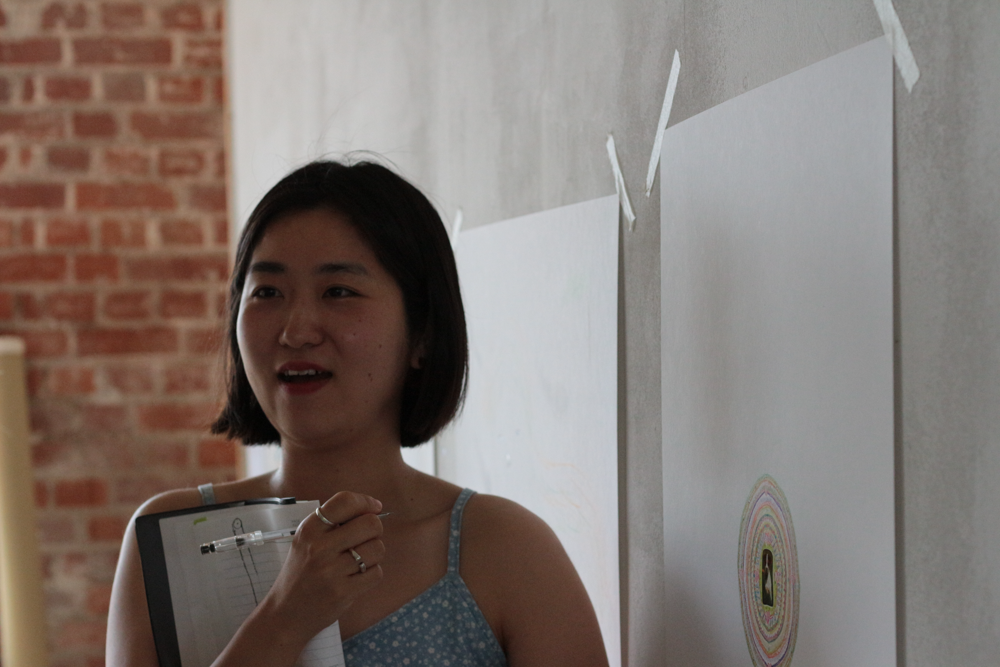 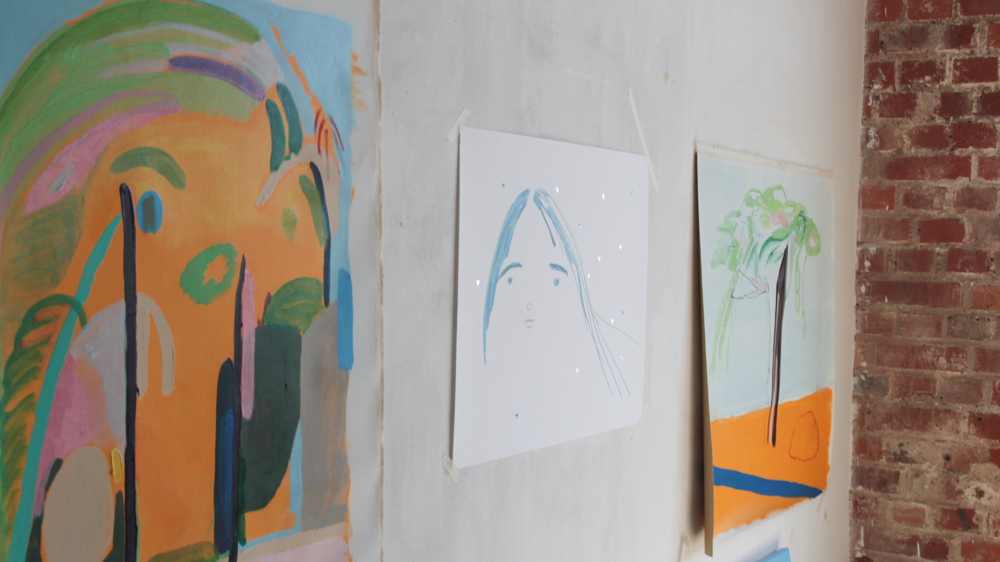 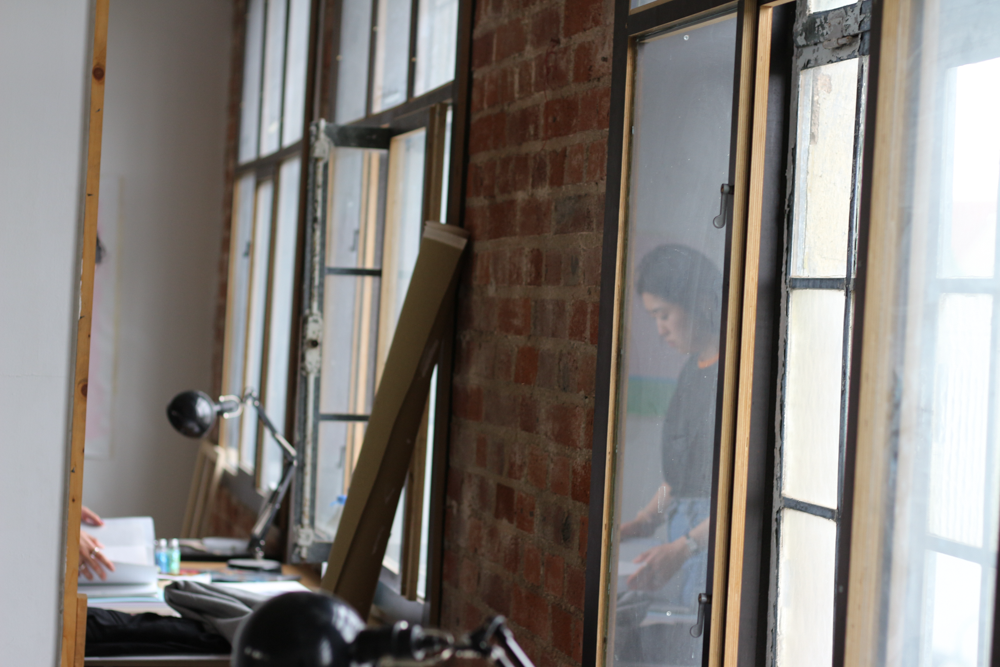 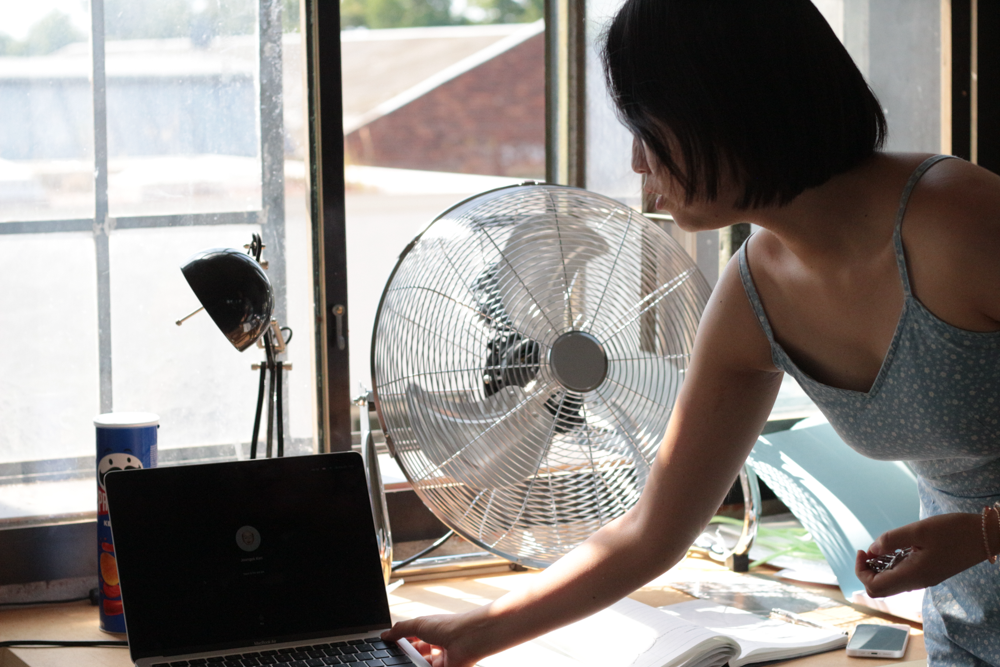 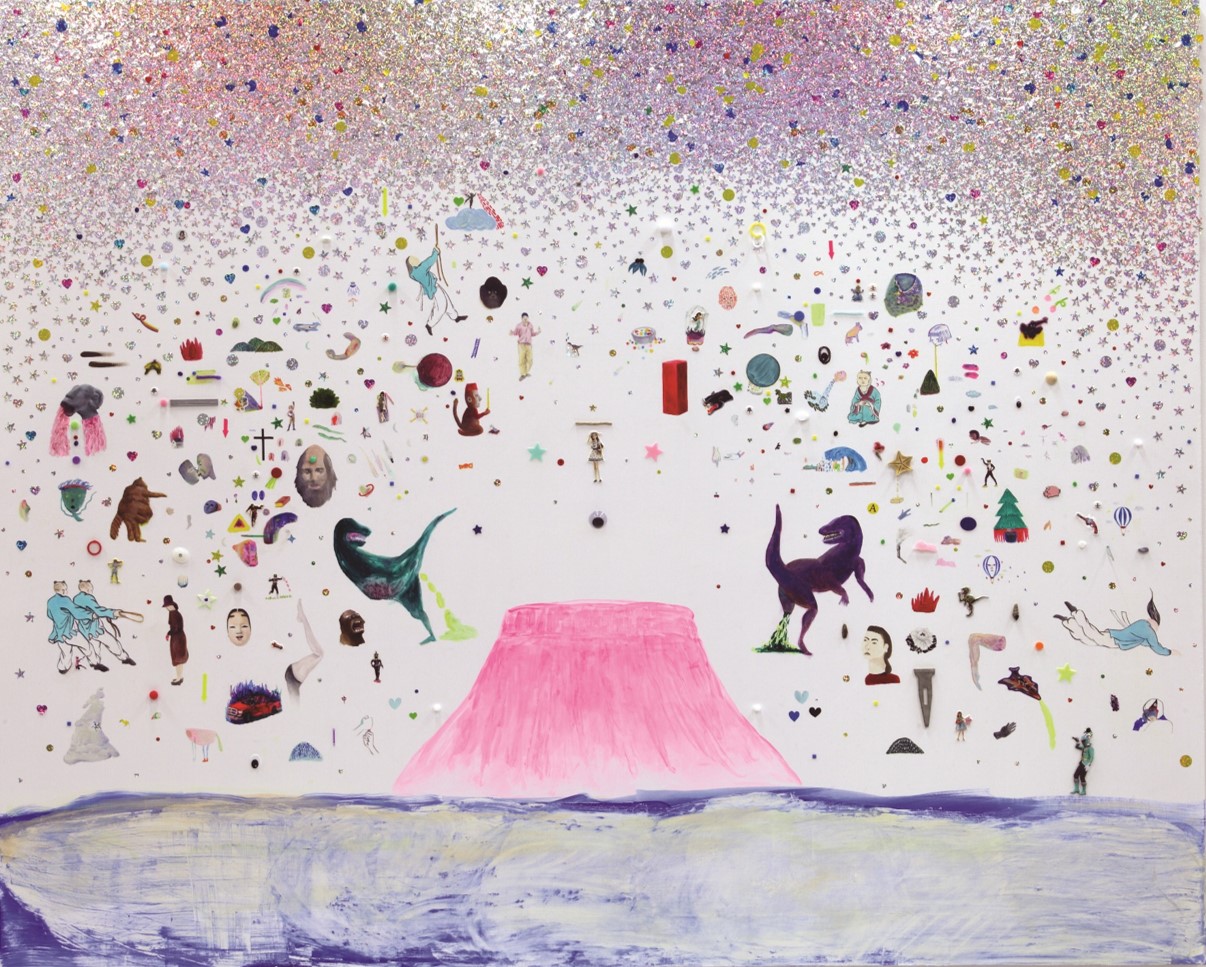 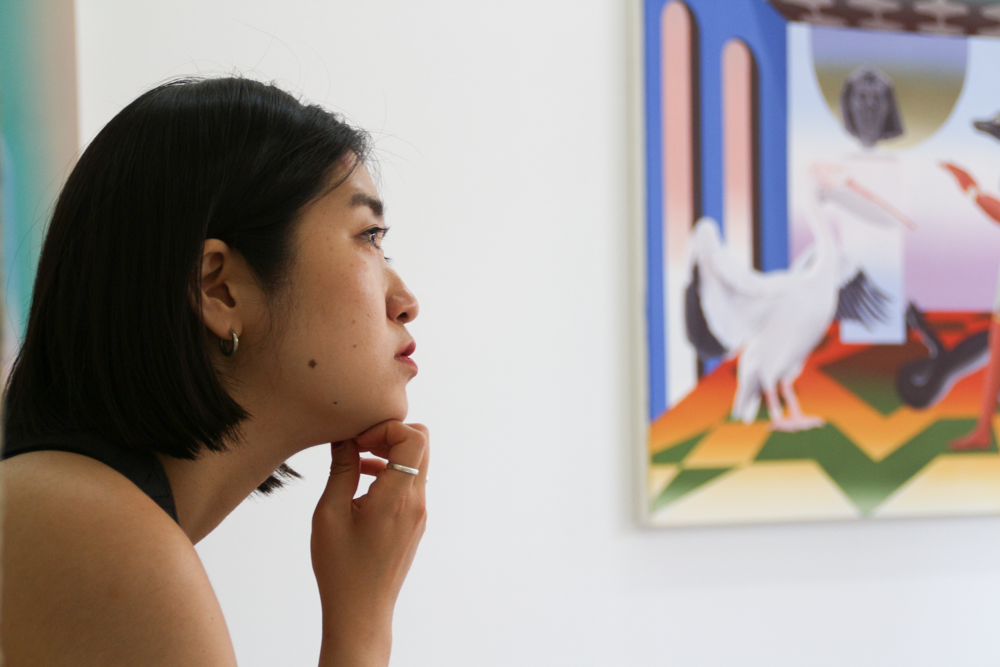 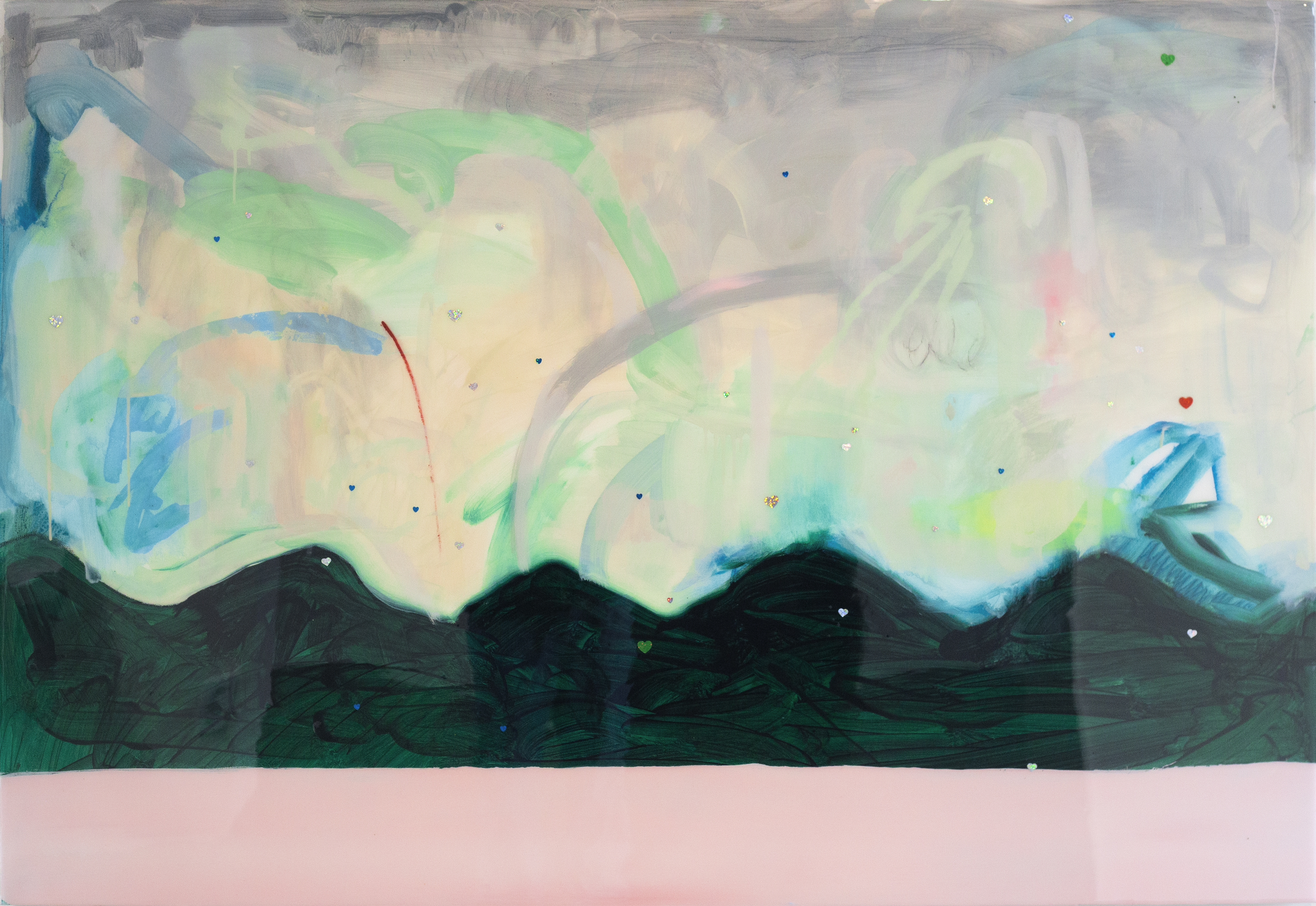 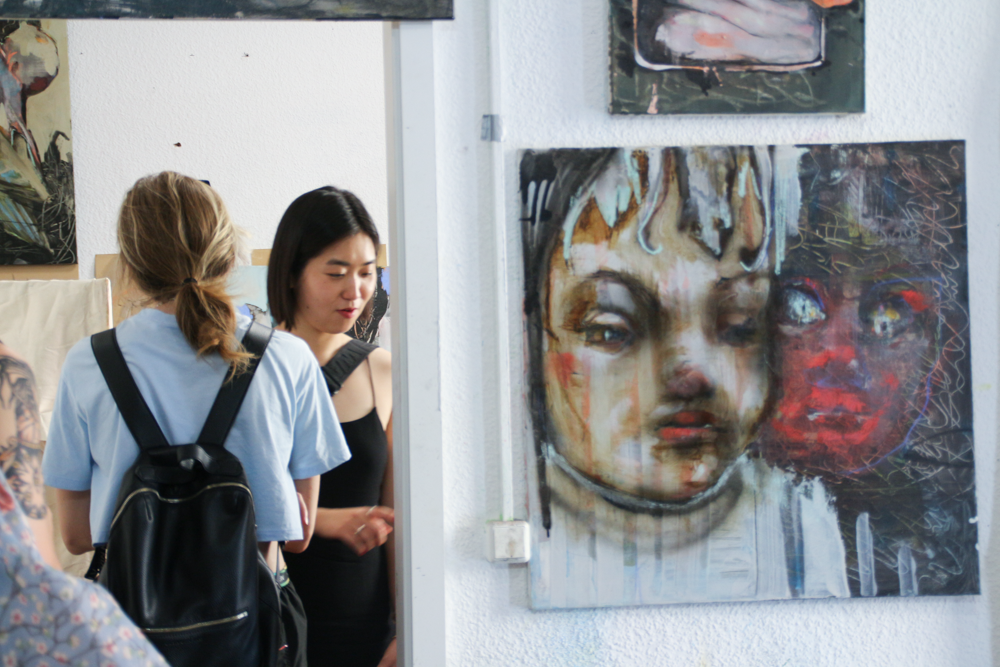 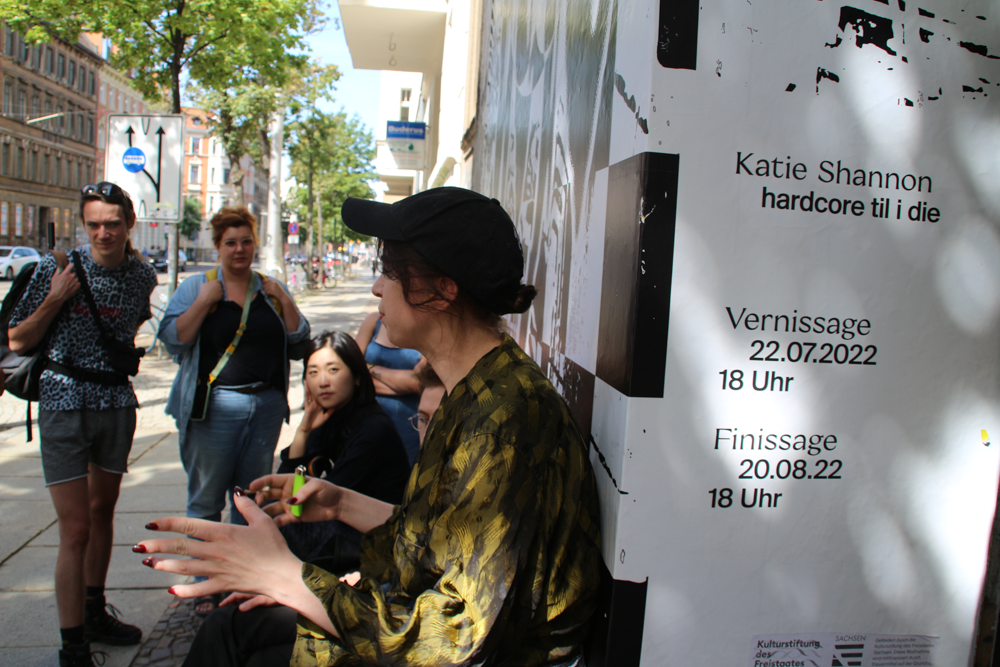 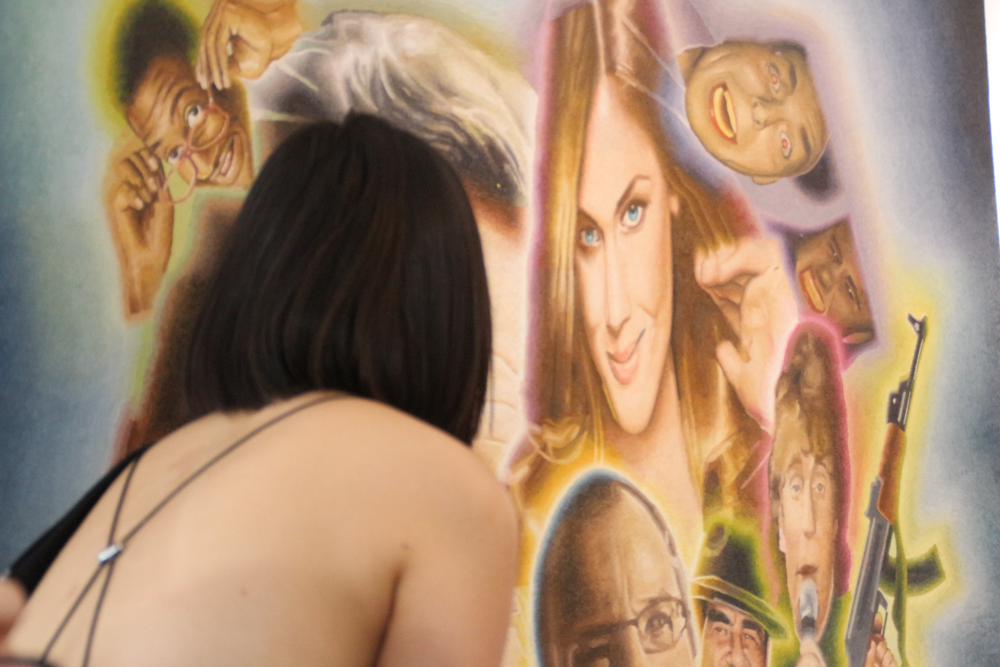 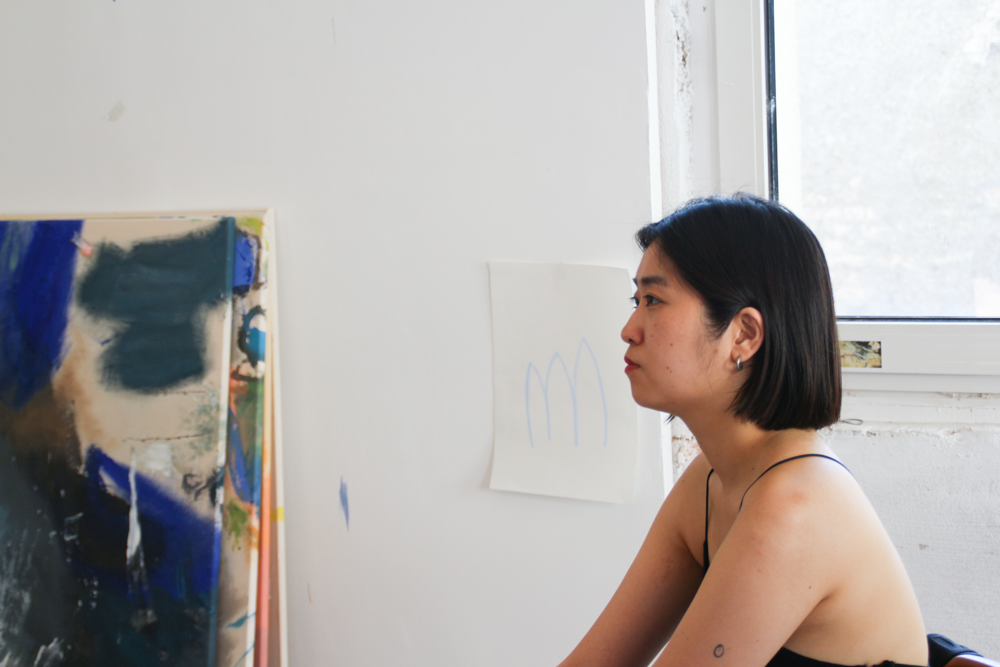 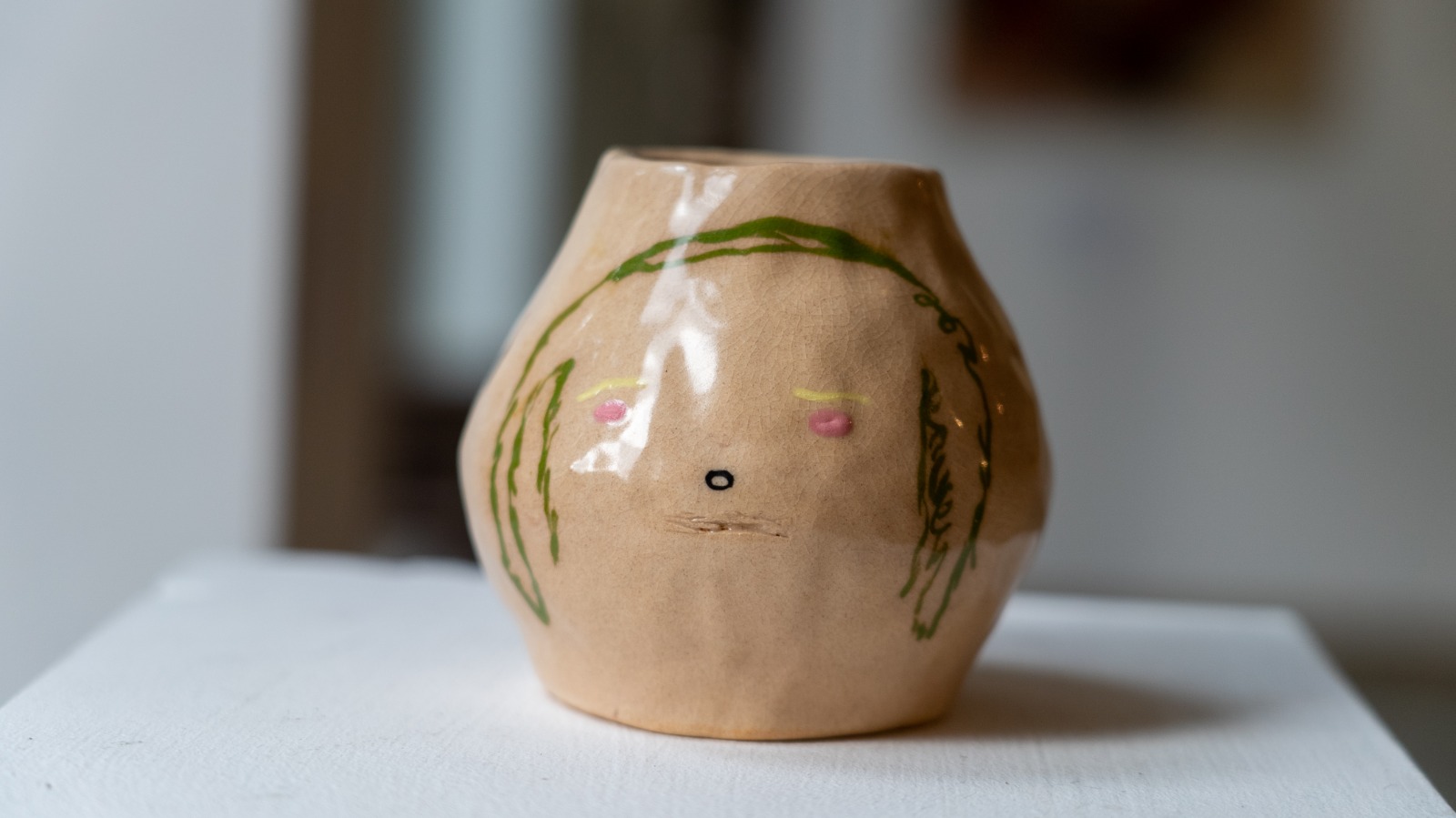 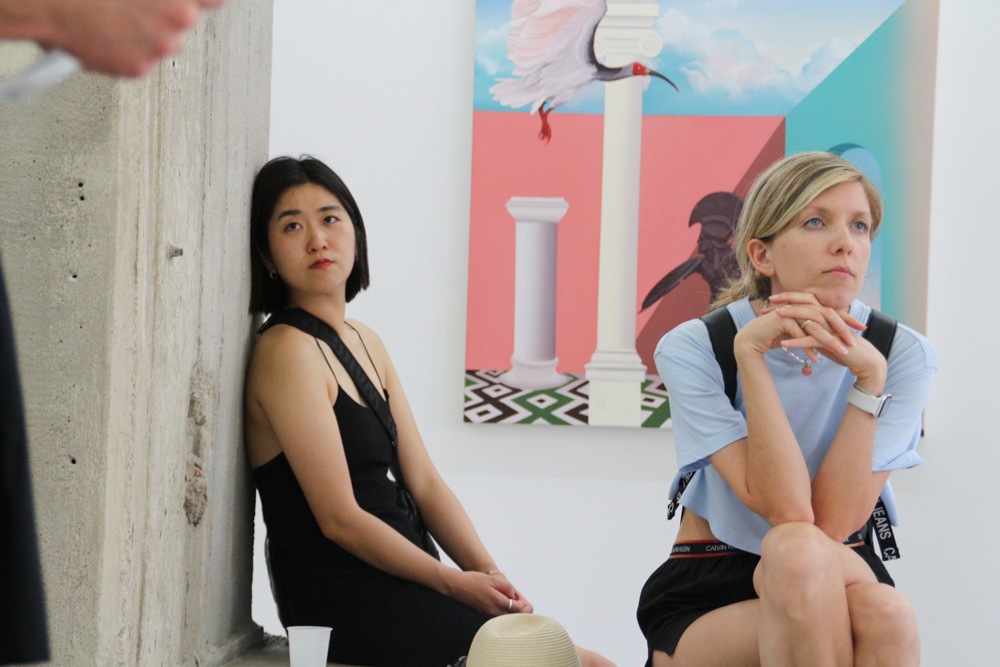 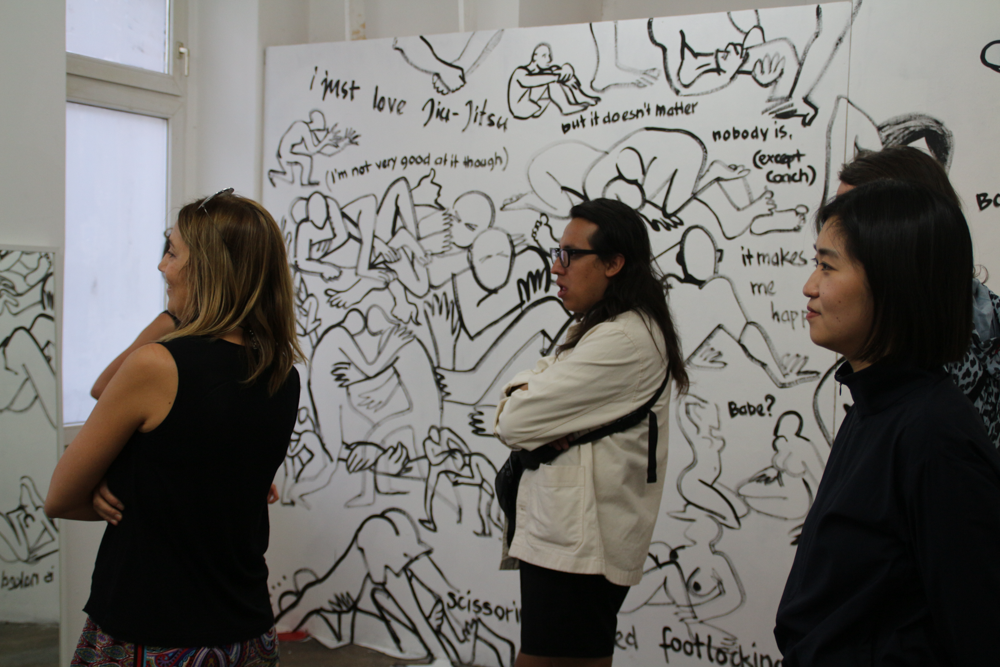 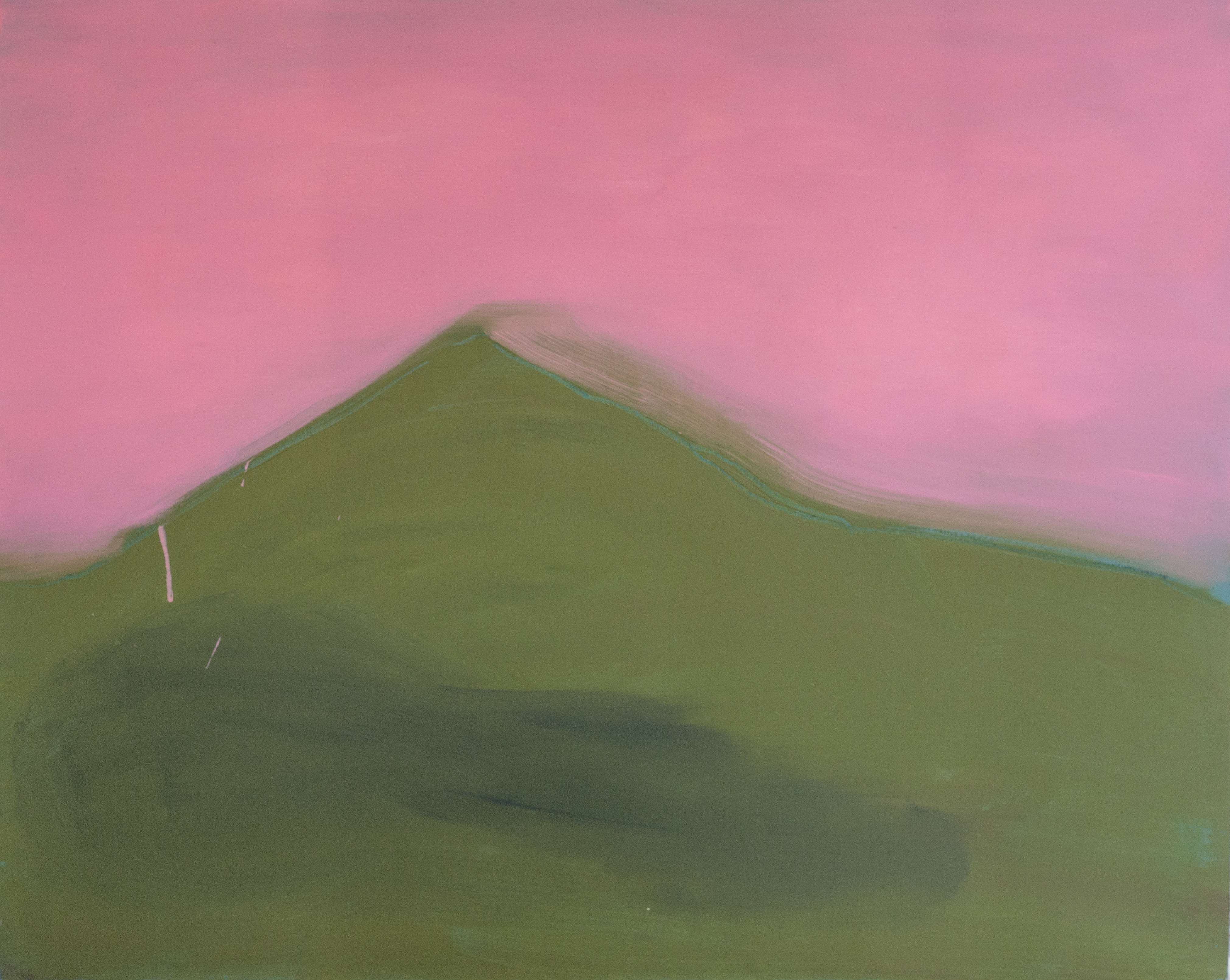 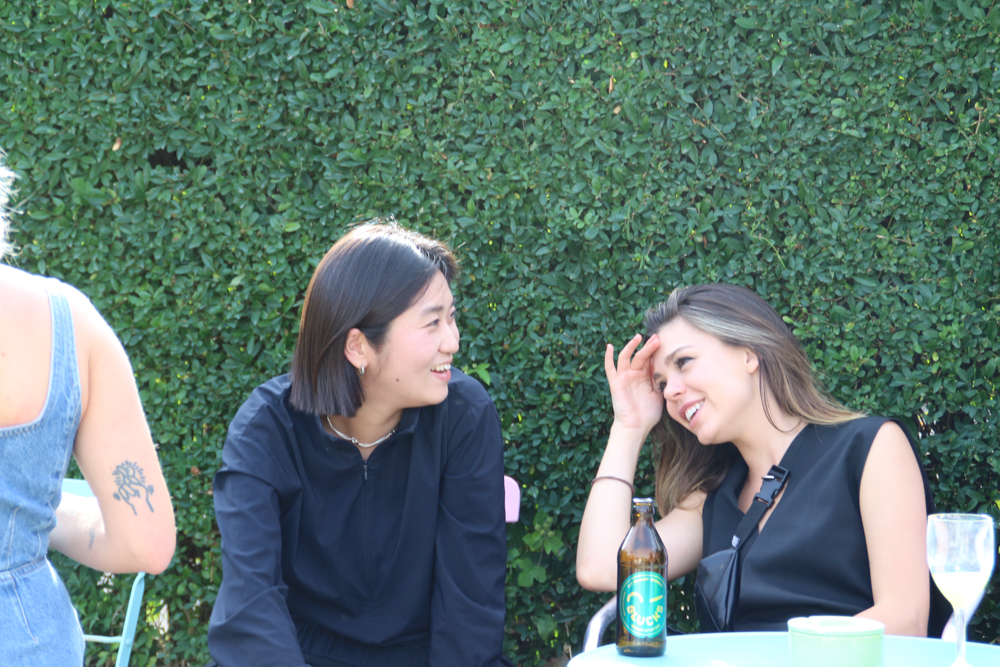 When Joongok moved her studio from Berlin to a family building where she grew up, she would pass dogs as she walked to work. Chained, with only makeshift lean-tos for shelter, these were not like the pets she had grown to love in the Germany. She made a special effort to greet them warmly each time she saw them. One day she met a Welsh Corgie on the path. It was obviously abandoned. She fed it and called animal rescue to find it a new home. Joongok would have liked to adopt it, but she is still working to understand herself and her place in the world. One day she will be ready.

Joongok works intuitively. Her paintings come from a place deep inside her psyche. She usually has several on the go simultaneously. It’s important she lives with them a while between each burst of creativity. Amongst the paintings are drawings in coloured pencil. Many are embellished with stickers. A black resin rectangle awaits its jewels. This complex blending of styles is uniquely her hand.

While Joongok’s work feels very modern,  she refers me to Yi Am’s 16th century paintings in which dogs are held in high regard. As I look at the joyful puppies playing, I am reminded of the shadow that started Joongok on this journey. The shapes and proportions of their heads are uncannily similar. I can’t help feeling these dogs are self portraits. As she frees the dogs, she is is really freeing herself.

All around the world, including Germany, Asians have had a long history of being discriminated against. This only grew as the COVID pandemic took its toll and people looked for someone, anyone, to blame. Despite bringing the plight of people of color to the forefront during this time, somehow BLM didn’t extend to Asians.

In truth, dog meat consumption was always something that very few participated in. It predominantly originated with the Khitan refugees who fled to Korea during the Goryeo (Koryo) Dynasty. The practice continued mainly with their descendants, who tended to be poor and live in rural areas. In the last 20 years it has fallen out of favour as more kinds of meat are readily available. These days no one under 70 would eat it and laws are in place to protect dogs from inhumane slaughter. Seoul is giving Berlin a run for its money as far as being dog friendly.

As Joongok comes to terms with her family’s past role in the controversial topic and her own personal relationship with dogs, I only see her wishing them love, freedom and happiness. I wonder if she will get one one day and how that will affect her subject matter. Til then, I will continue to enjoy her flying dogs.

You can find the latest work by Joongok on her instagram, at her solo exhibition at Galerie Irrgang or as an International Resident in our upcoming PK exhibitions.

Performance 8PM
I am where you are