Anyone stepping into Sebastián Hermida’s studio is instantly transported to the artist’s native South America. Furnished with a carpet of oil paintings of the Andes, an immersive landscape occupies his space. The soft pink and teal palette evokes a dreamy winter atmosphere across the mountain range. Yet in the foreground are winding grey highways and a series of pylons and cables. What was once a fairytale quickly becomes a dystopia as Sebastián poetically sheds light on the environmental destruction that we humans are responsible for.

For Sebastián, architect and artist are not mutually exclusive.

Although Sebastián describes painting as his “second language”, he studied and practiced architecture for eight years. Finding its technicality too restrictive, Sebastián turned to sketching and painting. However, Sebastián’s reincarnation as an artist is not entirely detached from his architectural background. His process is meticulously structured and follows a linear direction. He coordinates his composition with precision, layering elements, images and tones to realise his design. Buildings are consistently projected onto his paintings. They could take the form of an old factory, a German school or a modern home. Resuming the focus on spatiality, Sebastián develops his practice whilst simultaneously preserving his roots.

Sebastián sets his paintings in dreams.

Although frequently working with images to construct his landscapes, Sebastián describes their location as ‘within a dream’. The paintings are his window into another dimension or reality. They are a reflection of his own imagination. Using an impressionistic palette, Sebastián experiments with pink hues because of the dream-like softness that they cast on his work and the emotion that they evoke. For him, this atmosphere of fantasy and serenity connect to what he perceives as his current state; his deep sense of maturity and his appreciation for quiet as well as the now. By shifting his landscapes into this dreamy romantic utopia, Sebastián surrealistically captures the juxtaposition between beautiful dreams and harsh realities. 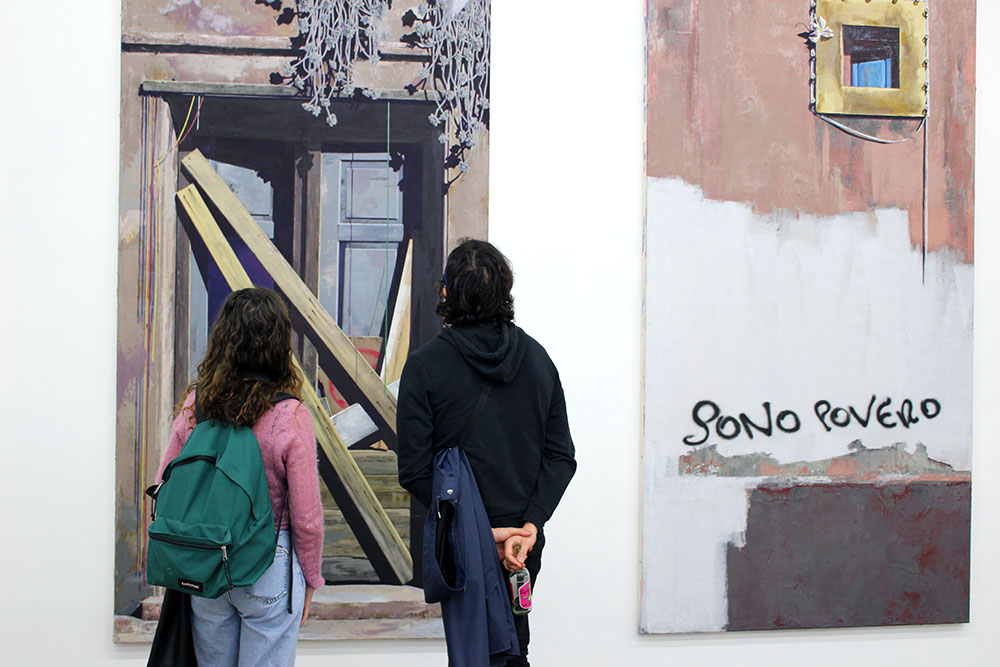 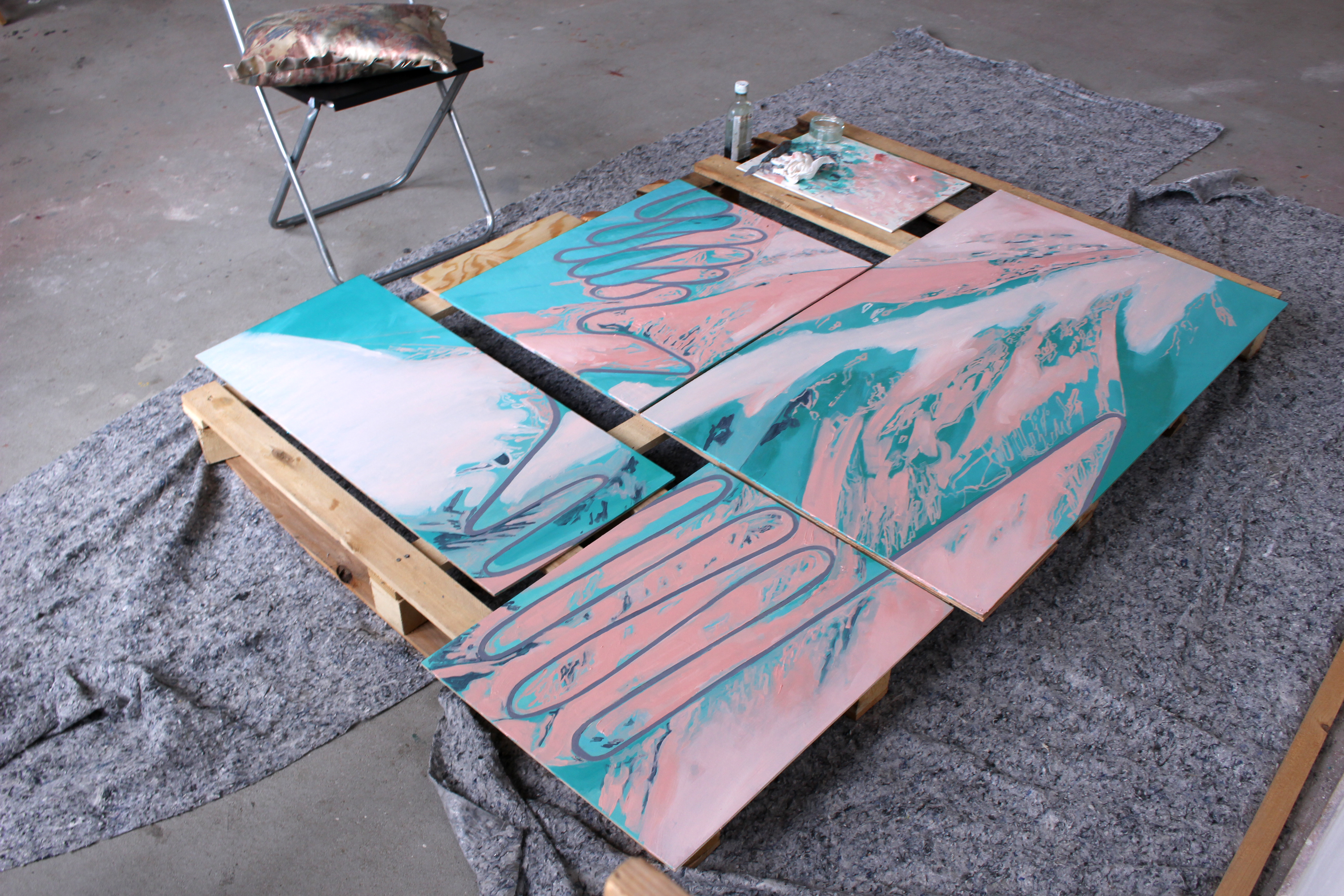 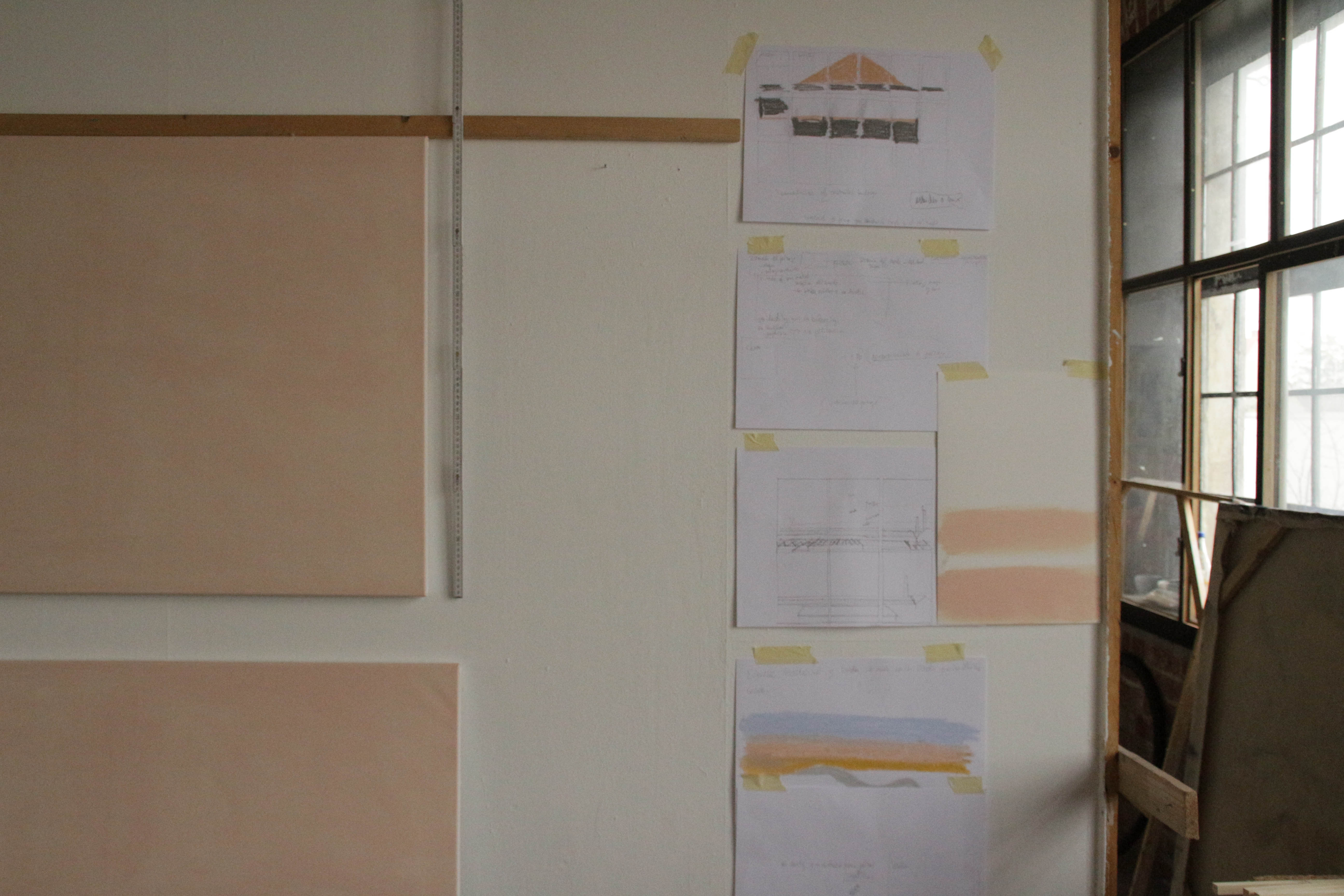 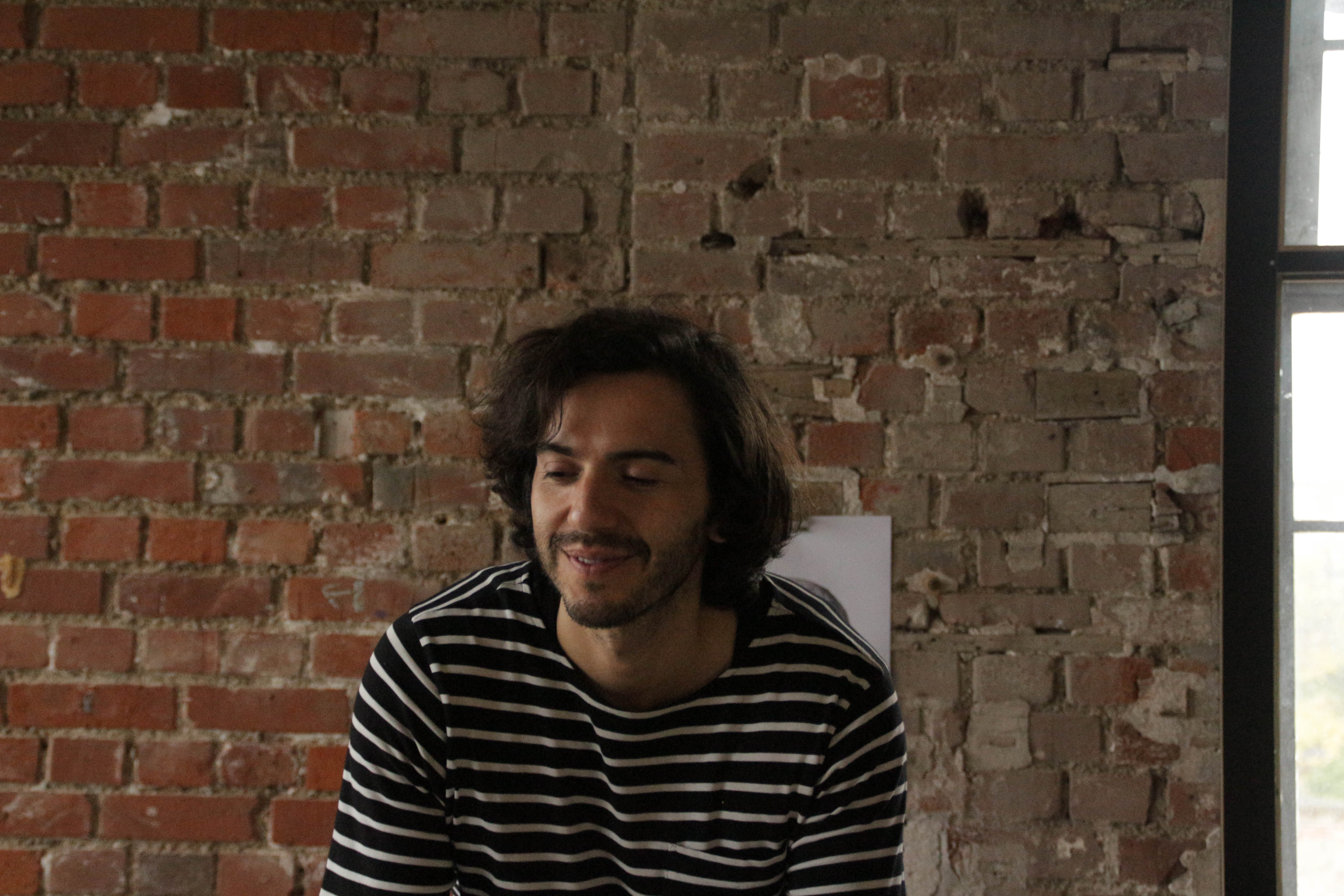 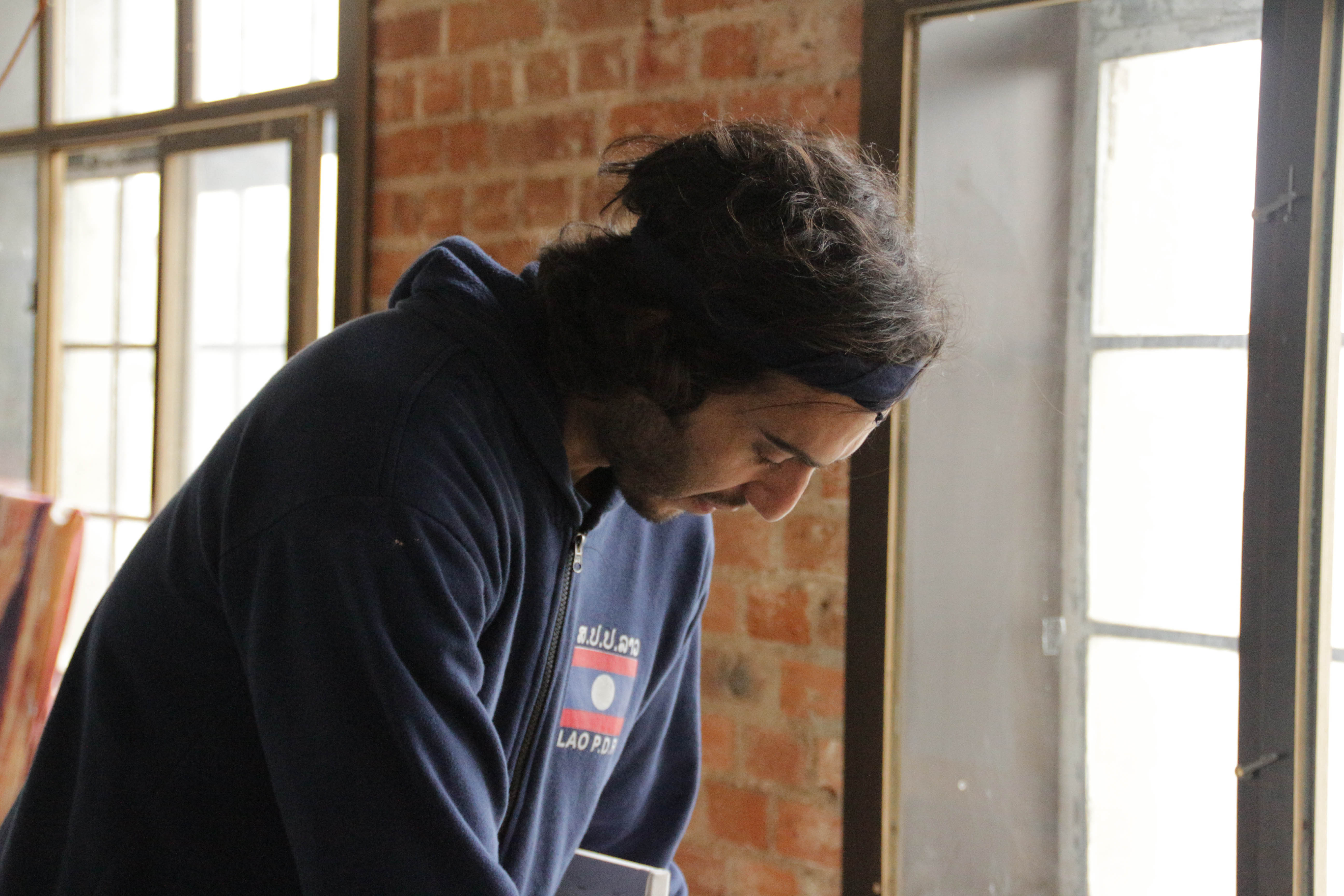 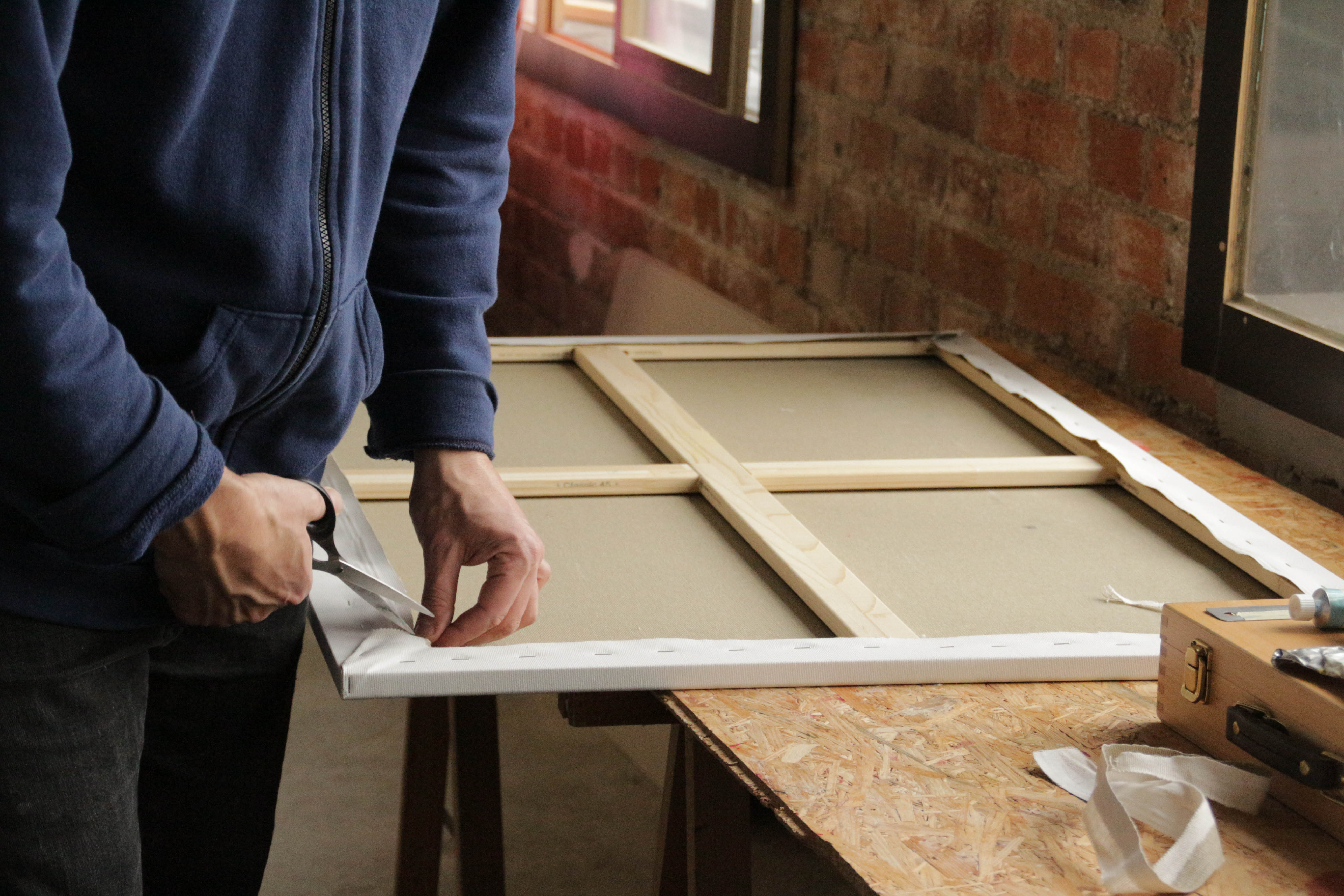 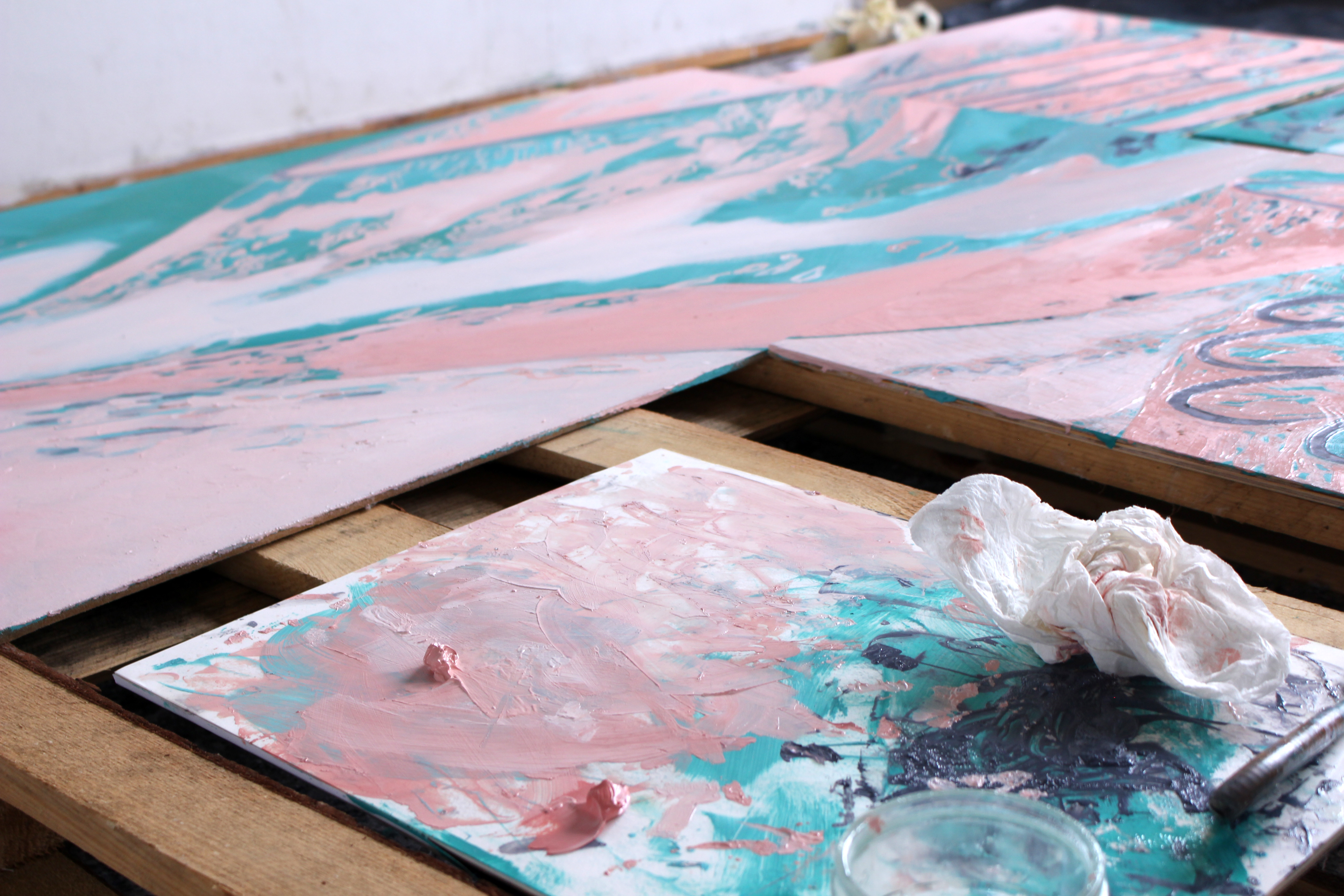 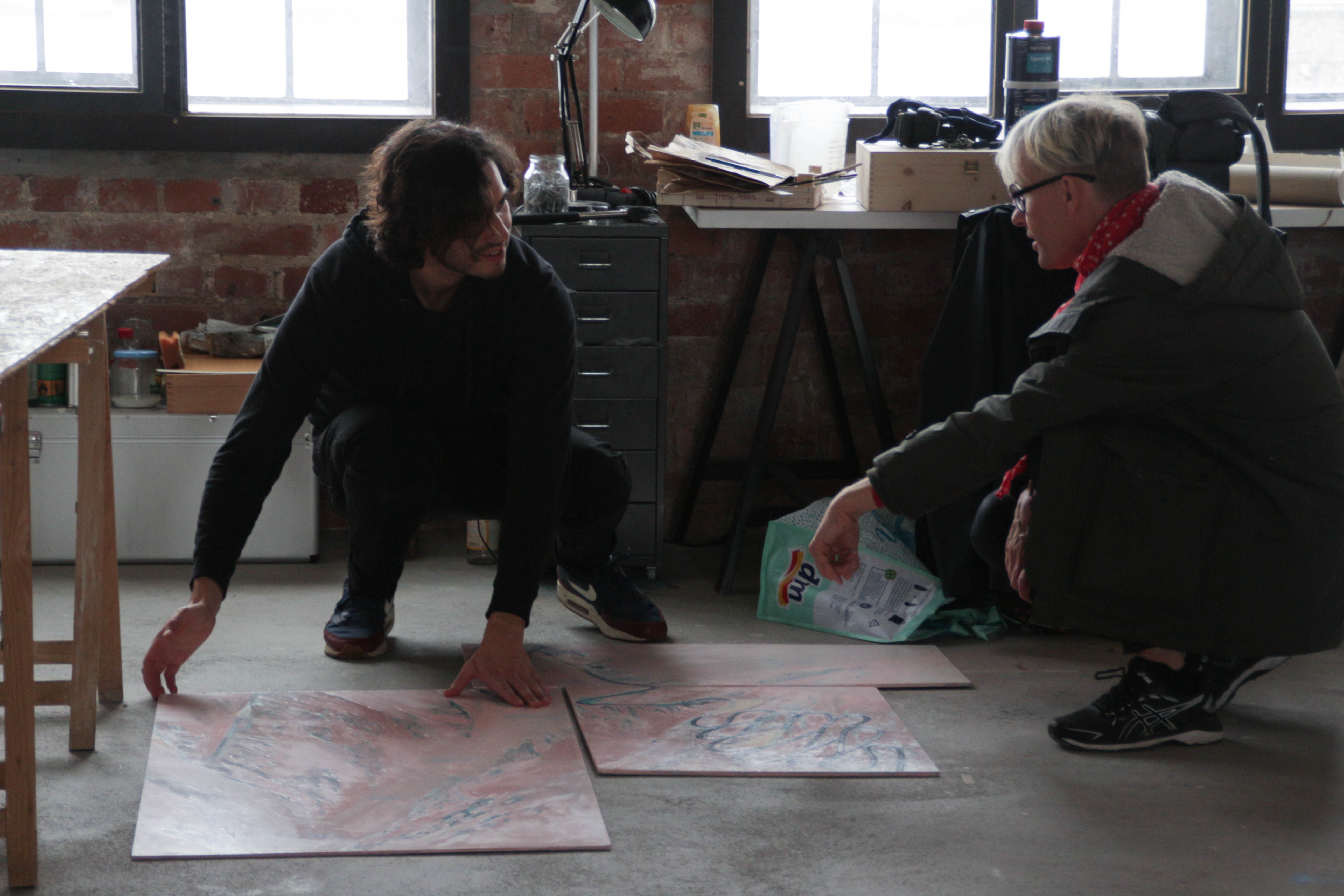 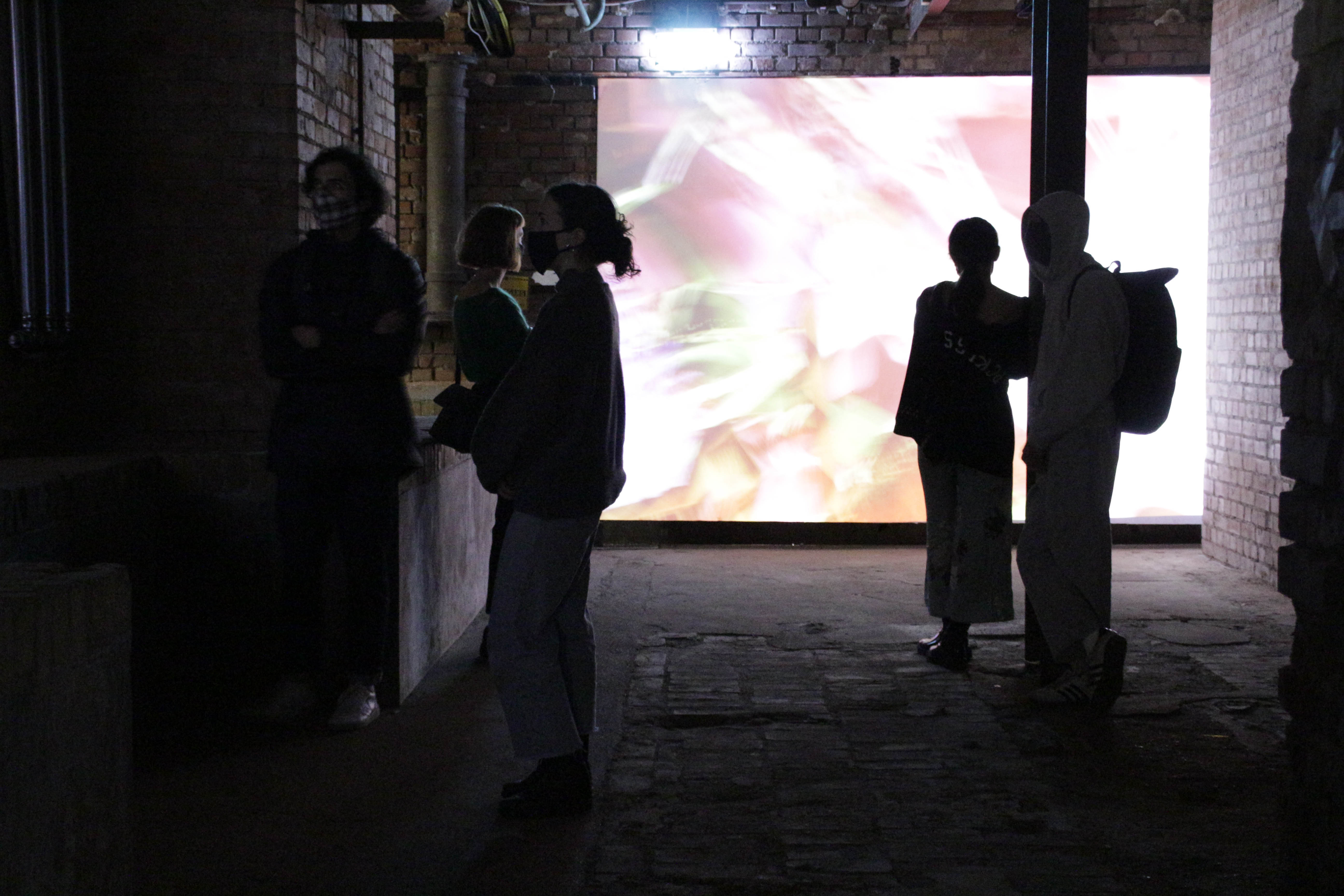 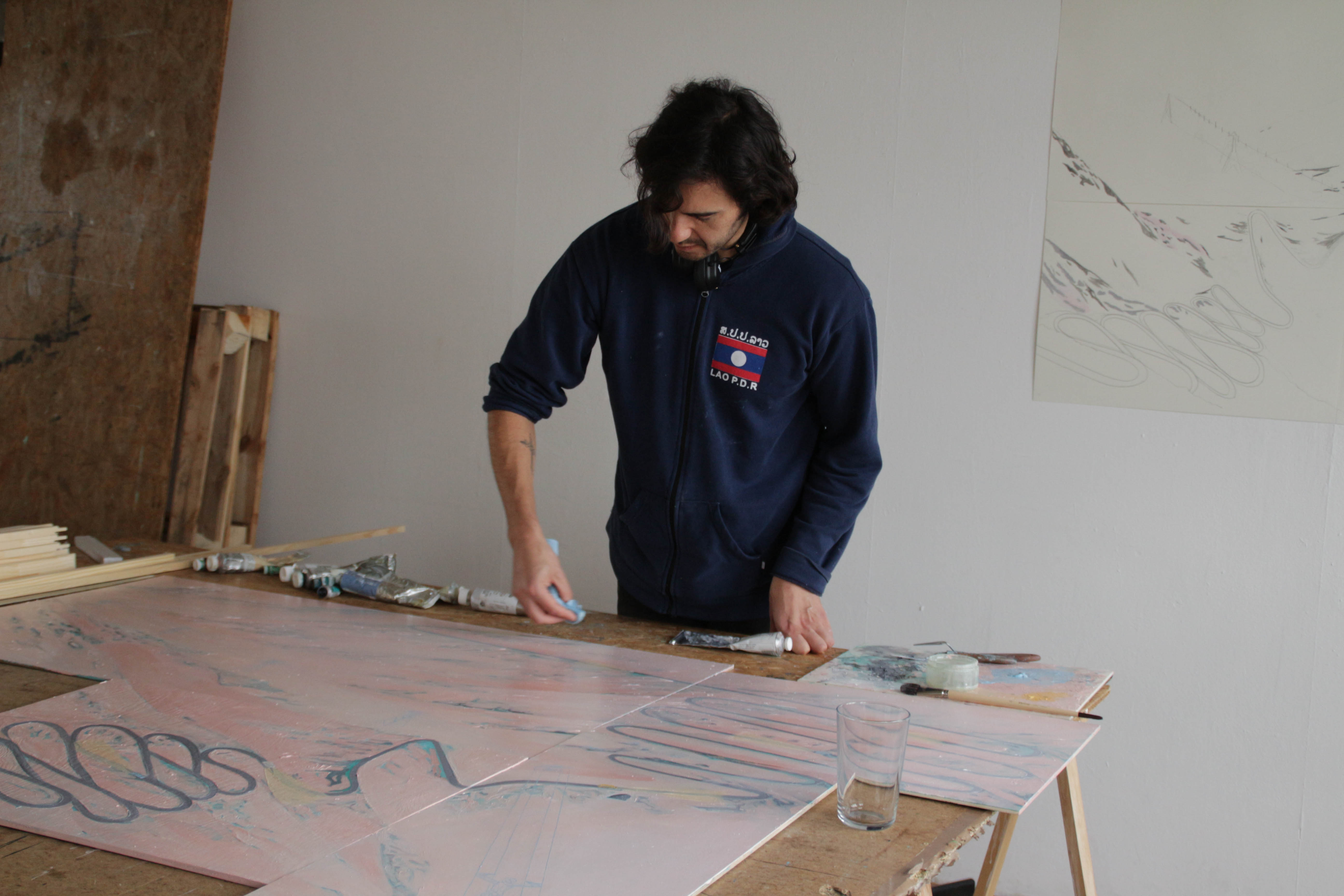 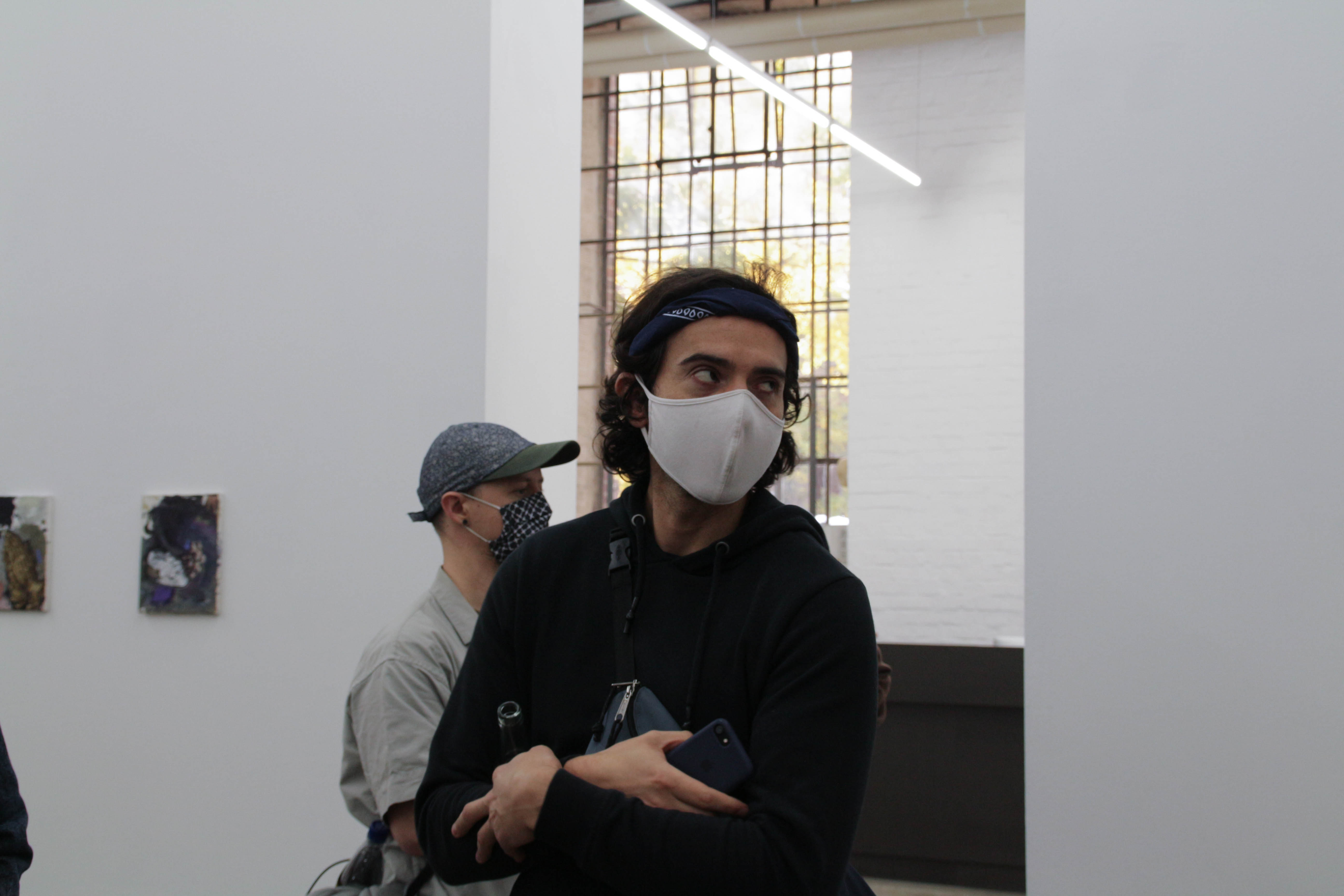 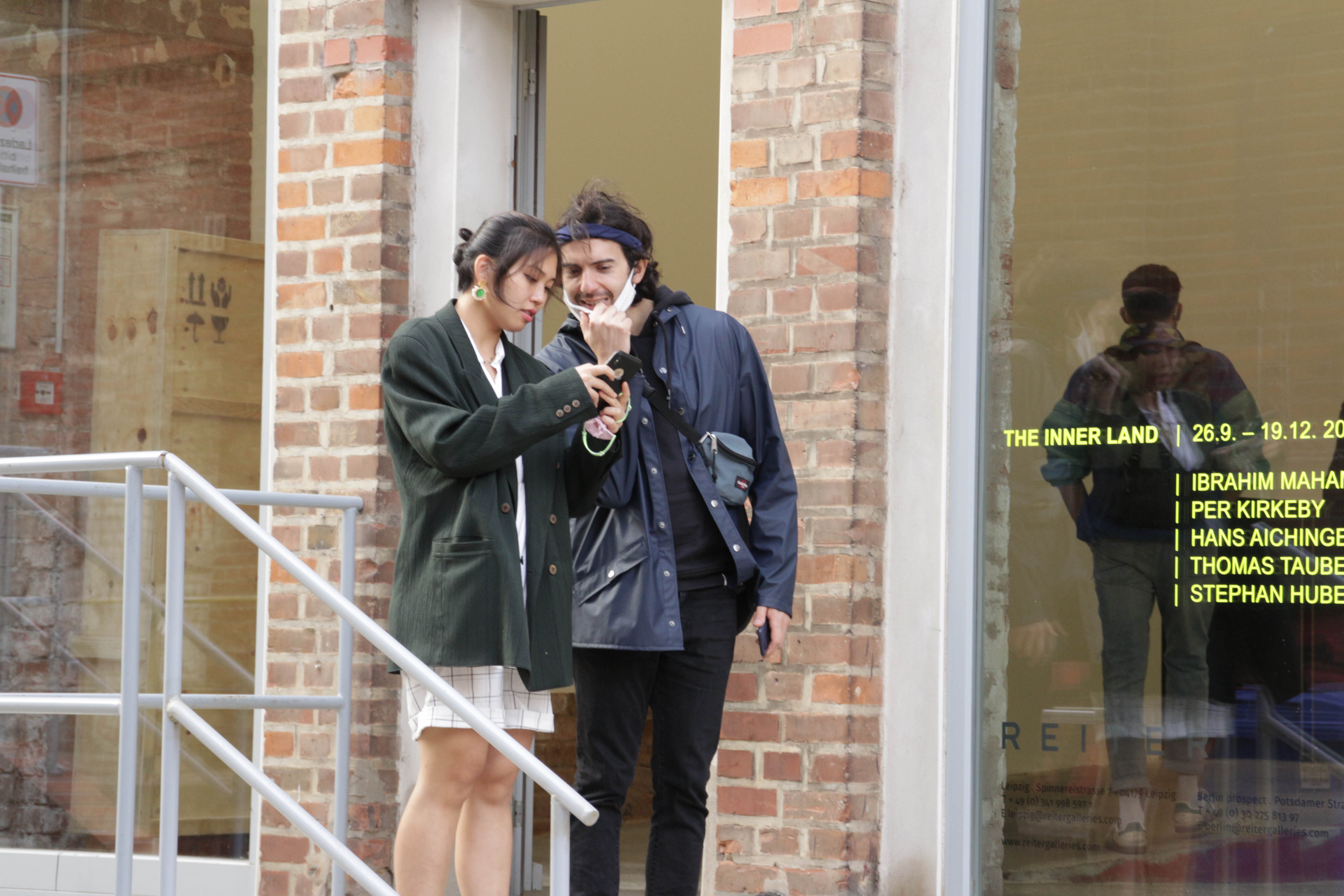 Another layer to this dream-like dimension is the faceless figures that frequent Sebastián’s paintings. The inhabitants of the landscapes in Hermanos in Oma’s Garten (2020) and Neo-Hippies (2019) entirely lack facial details. In Self isolation (2020) and The old lady & the old factory, the individuals are depicted from behind, thus remaining unknown. Sebastián is drawn to the sinister aura that they arouse. He embraces their anonymity, seeing it as a way of enabling the viewer to position themselves within the painting and assimilate sensations of being a part of that moment.

Sebastián grew up in the Chilean countryside and connected with nature from an early age. Observing and understanding his landscape, he became attuned to how humans exploit, change and destroy the environment yet remain disconnected from the process. How the industries and infrastructures that facilitate our consumerist culture cause the collapse of entire ecosystems without scrutiny. Sebastián uses his art to criticise our current relationship with nature. Similar to an artist who continually inspires him, Alfredo Jaar, Sebastián explores contemporary issues through their representation. As Jaar said, artists have a role to “create empathy, to create solidarity, to create intellectual involvement”. This is certainly relevant to Sebastián’s work as a fundamental activism underlies it.

In this post-industrial age, airports have surpassed religious buildings as the largest constructions on earth. For Sebastián this highlights the extent we pollute the earth and our fixation on moving and producing, on accessing and controlling landscapes. Dotted everywhere, airports allow us to map the world and make any part of it attainable for our exploitation. With their expansive runways and terminals, airports consume the surrounding landscape like a black hole. These constructed landscapes, along with the dense urban scenes he observed whilst living in Cologne, are of particular interest for Sebastián whilst at PILOTENKUECHE.

Discussing his excitement about this residency, Sebastián says he is “trying to be more playful… I am seeing that the artists here are very multidisciplinary”. Sebastián is keen to explore how far his medium and motifs can go. See where this experimentation leads him in the upcoming exhibitions, Big Soft Illusion and Flat Time Experience. 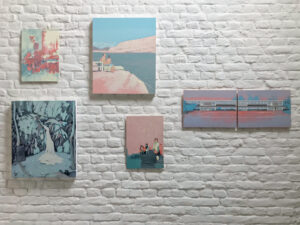