Noah communicates his musicality through his songs, speech and movement: right down to how he taps his cigarettes after each one that he rolls. Colour is of the utmost importance. It’s in his paintings, splashed across his shirt and delicately painted onto his fingernails. Noah confronts his thoughts and emotions by expression through his artwork and song writing. His intention is to reveal his naked self to the viewers and listeners. In his latest works, Noah has been figuring out the intricacies of showing ones true self.  What are the reasons we sometimes adopt a facade to mask this person in an attempt to embody the perceived perfect individual?

“Embo can do things that Noah cant. You need to show yourself the same way you tell a good story, because when we are talking about art and artists we are always talking about good stories”. ‘Embo’ is a conclusion to all the paintings that Noah has done over the last three months. Noah has been working on the ‘Rhino’ series for the last while and has discovered that this rhino figure embodies all that he is afraid of. “When I really want to figure what’s going on I do it in my pictures reflections.” Through these previous works Noah was able to string together the concept for this latest piece. 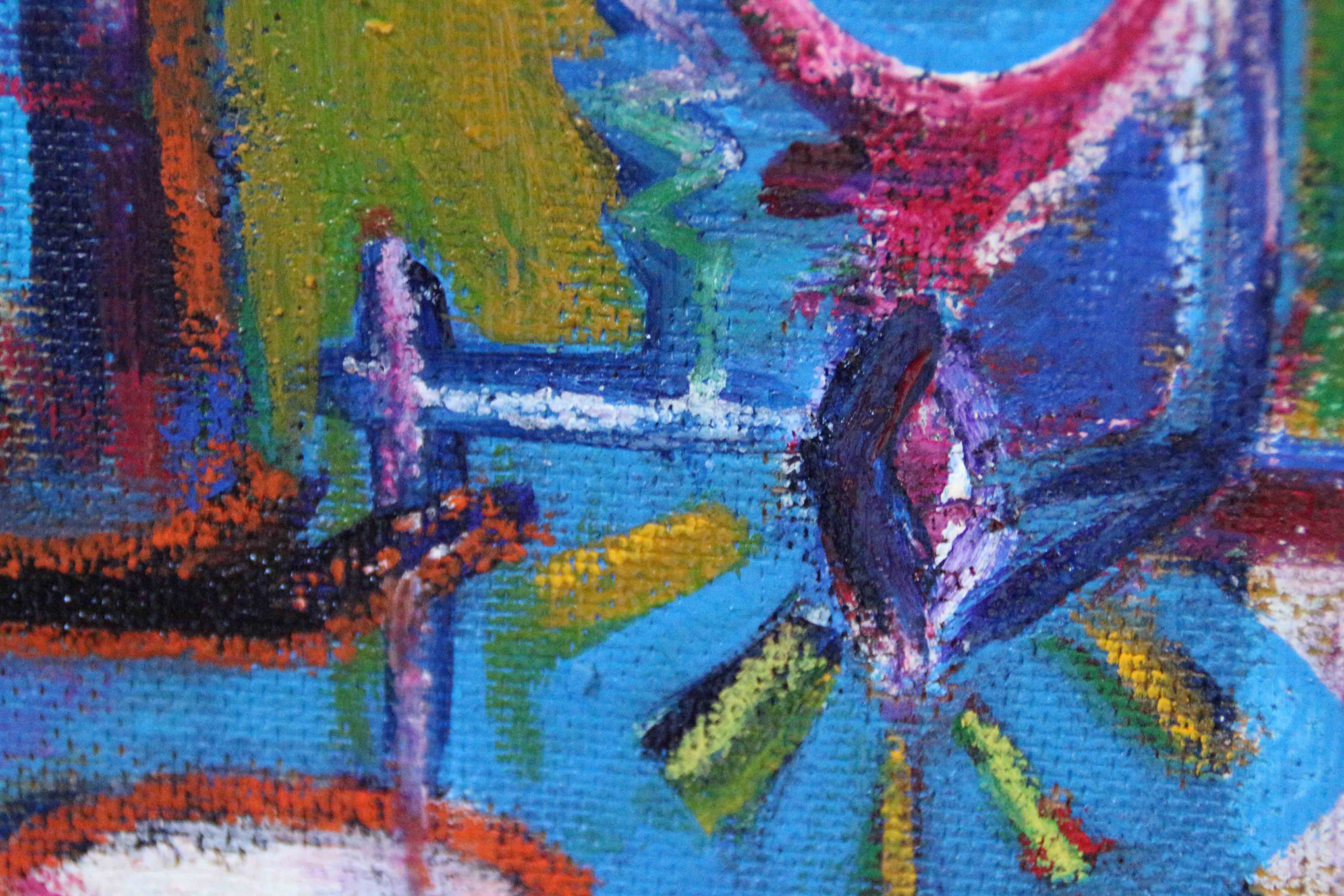 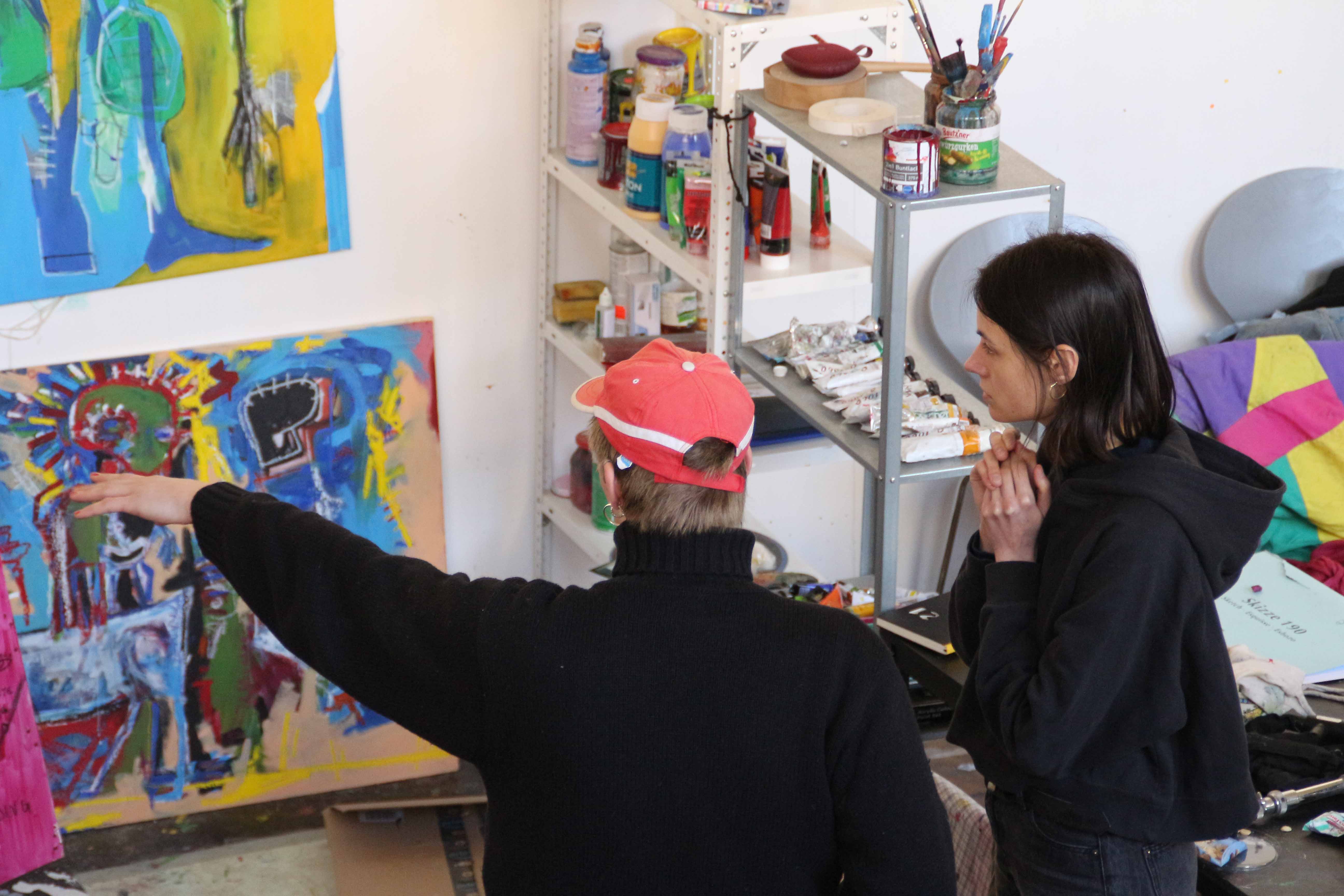 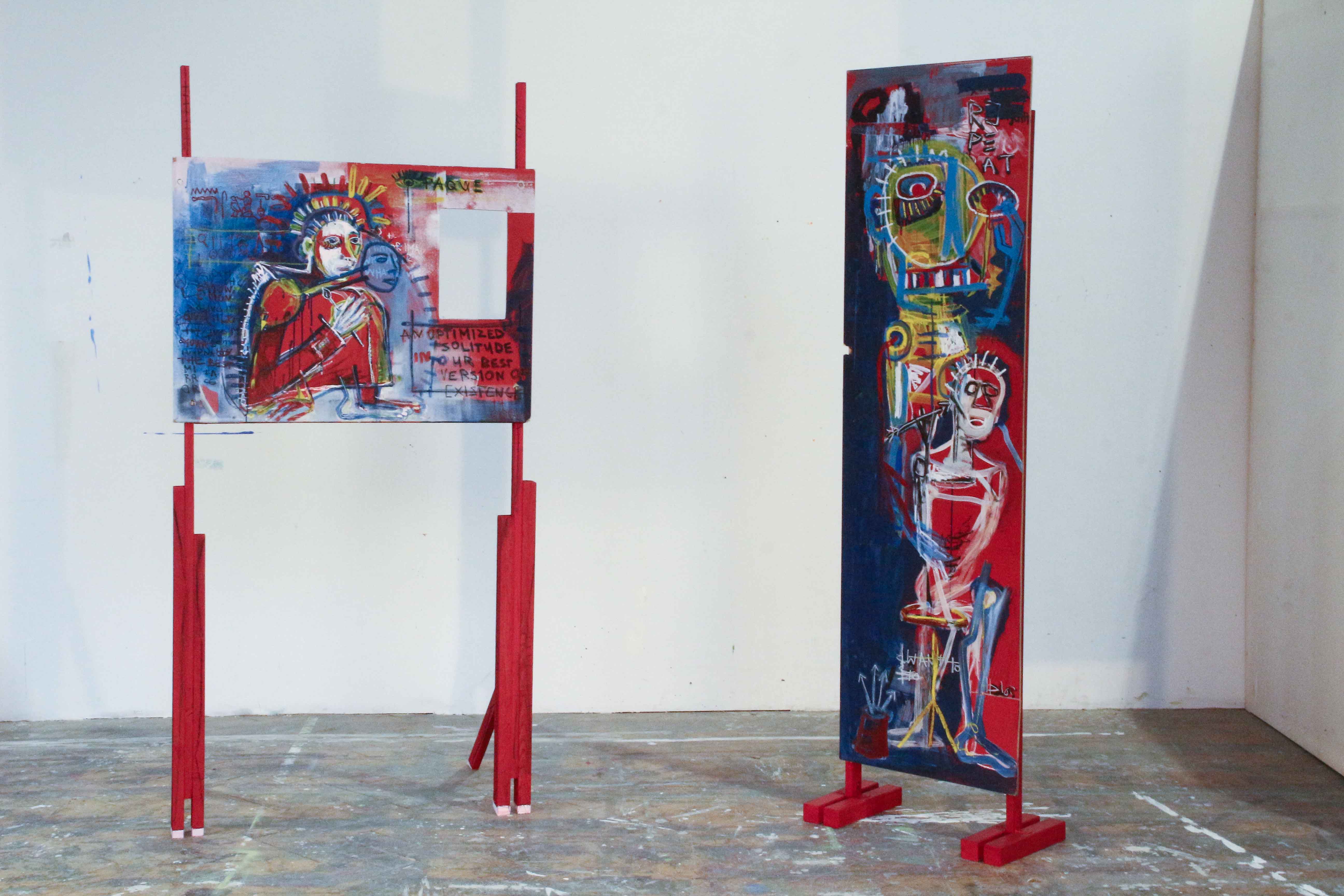 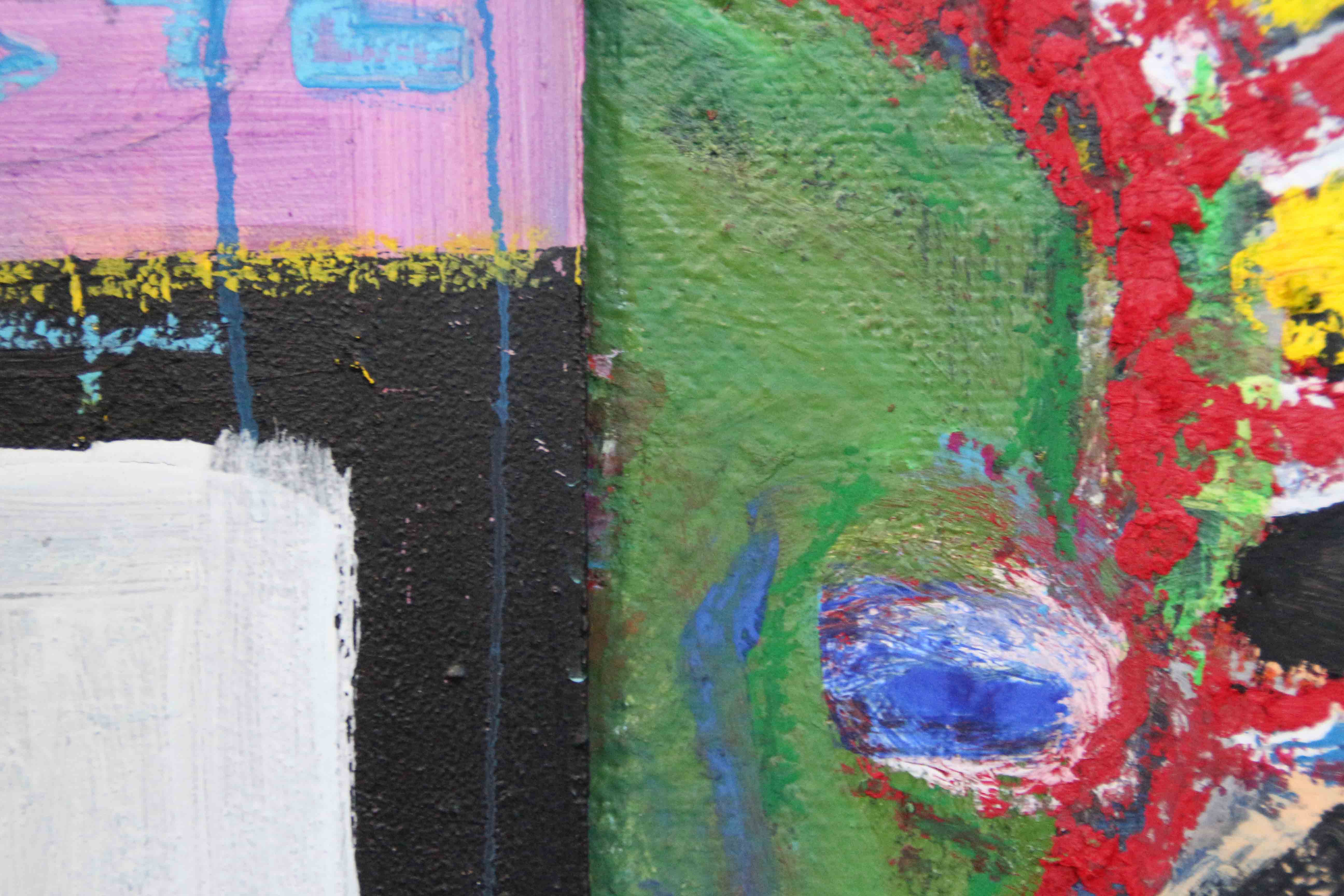 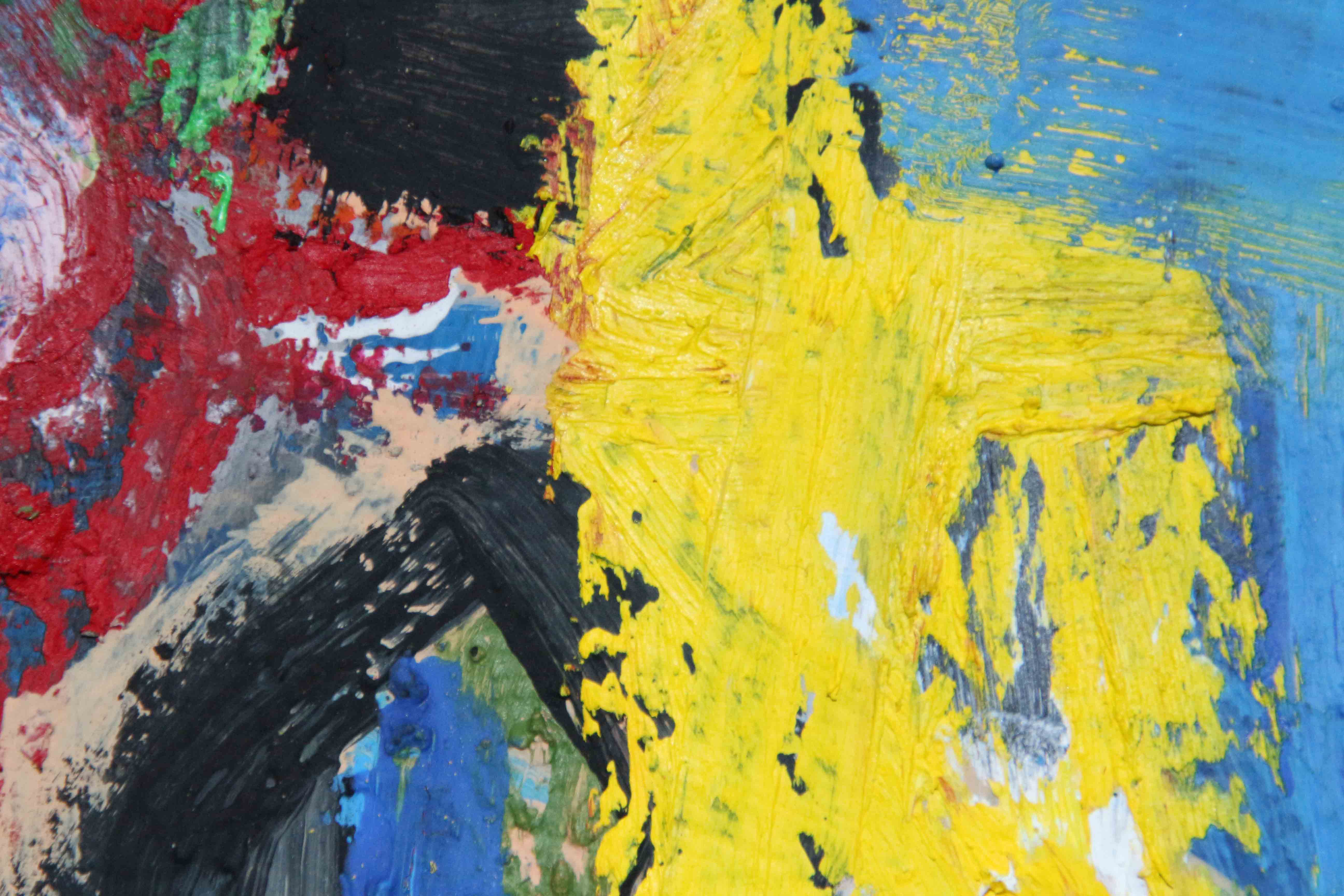 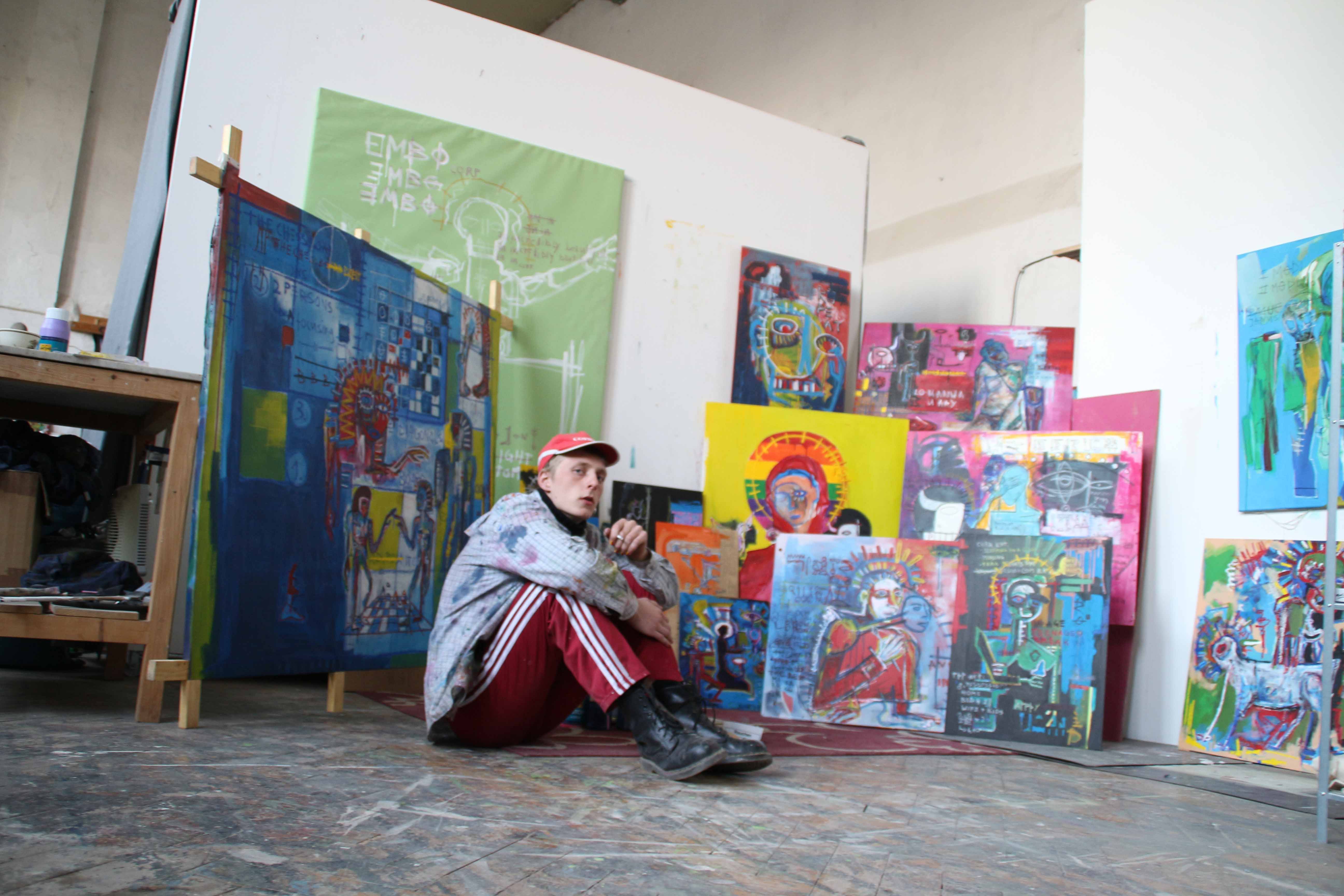 images by Lucas Stafford for PK or supplied by artist

Noah uses ‘Embo’ to confront the modern norms of holding back emotion to remain in the capitalistic loop of wage earning and maximisation. People can often be unable or do not express any desire to see what’s beyond the surface, hence our incessant urge to embody that which we believe to appease the societal gods. This painting represents the struggle of maintaining this facade. The figures tender eye gives the impression that he is afraid and his stiff, fixed position shows us that he is captured. “He is captured in like this the same way we are captured in the frame of always being capable of doing things, always working.”

The lettering K-non refers to oneself being emotionally flat. Upon completing the painting Noah realised that the ‘Embo’ is the person behind the ‘Rhino’. The person that is constantly eating up this uniform behaviour. There is only so much pressure the Rhino can take and the result of all this persona flattening is often an explosive emotional reaction of sadness or anger. Creating ‘Embo’ was a fight in itself and he needed some love, but at one stage the fighting stopped. “I was so angry about Embo because he didn’t do the things I wanted him to.” This embodiment can do the things that Noah can’t, yet he put up a fight when asked to do the things that he wanted.

In the upcoming exhibition PLAY DEEP PLAY for Pilotenkeuche Noah is exhibiting his piece “REPEAT (The Genius)”. “What do I do? I repeat, I repeat, I repeat. I constantly ask questions. I ask questions to you, I ask questions to myself and then I try to get all the information I have onto paper, onto a surface with colour, with lyrics or short little signs/hieroglyphs”. This two part painting installation approaches the imperfect individual in search for the beauty of its being and invites you to interact with the idea in a physical way. The window within the first piece stares across to the former idiot, encapsulated in the tall frame of repetition.

“I try to focus on one piece at a time so that I can really get into it and debate with the painting”. When debating with “The Genius” the struggle for Noah came from talking about self love and self acceptance. The inner fight when creating is part of what makes Noah’s work interesting for him. He dives deep within this conflict and really questions himself without a choleric attitude. Noah refers to these so called genius minded individual that we think of as non existent and that we as humans are all idiots repeating and repeating.

Noah is currently on PKRD 47 as a local participant. Keep up with Noah on his website, instagram and in the following upcoming events.