Andrea Garcia Vasquez deconstructs the hermetic human world perspective to demonstrate the real human/non-human interconnections and interpret the non-human experience. She deems that a large reason for the current environmental crisis is anthropocentric beliefs and our inability (or unwillingness) to imagine non-human perspectives. She adopts various media to explore ecocriticism theory, digital discourse, and geology.

Andrea, an American artist of Venezuelan descent, has obtained a Diploma Degree at HGB in New Media: Installation and Space with honorable distinction. She has exhibited her works internationally in Germany, USA, South Korea, and the Middle East; with solo and two-person exhibitions in Beirut, Leipzig, and California. She is also an organiser at MODS (Leipzig), an international group whose members come from Germany, Spain, and Norway. As an art community engagement initiative, they manage collective discussions, residencies, and other projects.

Andrea started her group exhibition history quite early, at the tender age of 19. These experiments back in New York were the initial steps in establishing her artistic media and subject orientation. An amusing story from that period is Andrea’s mother calling the gallery that she had only just starting to work with and pretending to be an interested art collector. She was trying to support by creating a buzz around her daughter’s early works.

Moving across the ocean was a decisive moment in Andrea’s life and career. Since 2015, she has been living in Leipzig. She acknowledges that distance creates melancholy, converting personal experience of the physical spaces into a worldview and attitude. That concept is applicable both to everyday walking and far travelling. 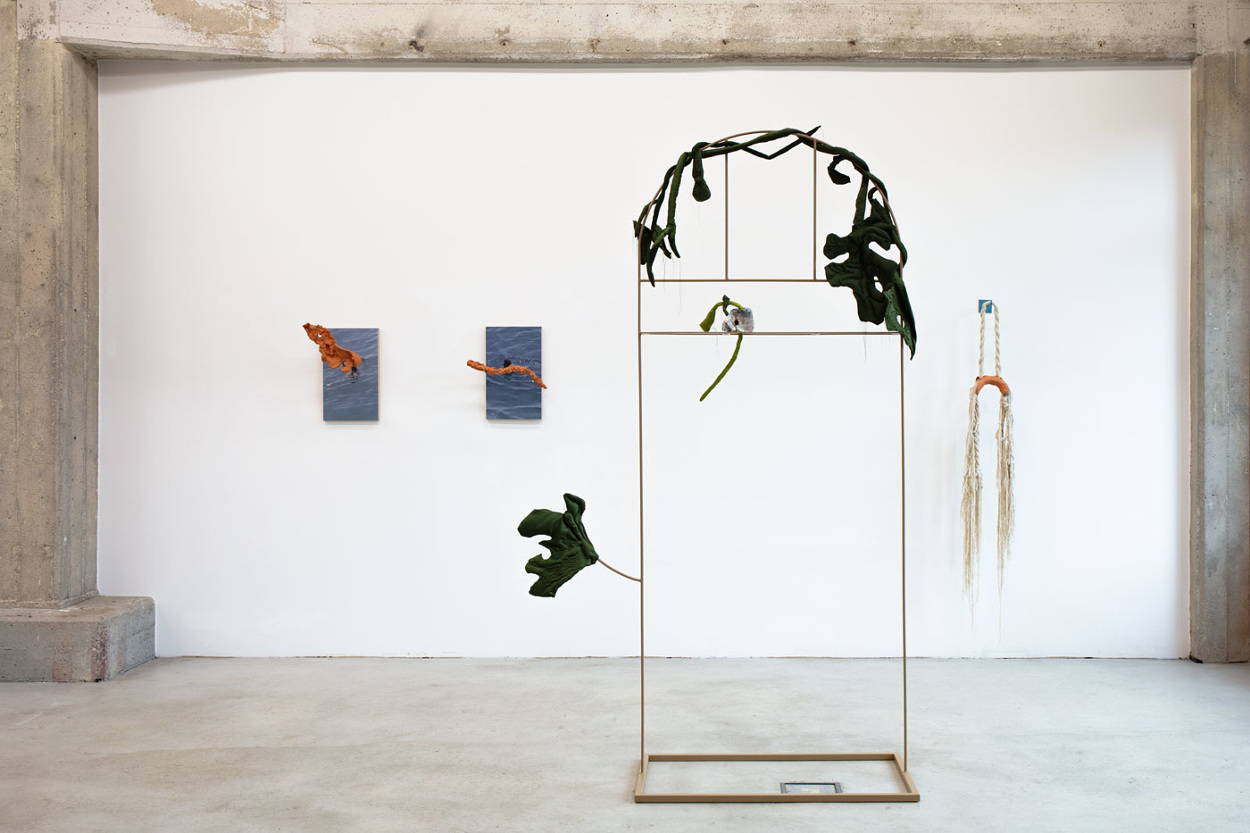 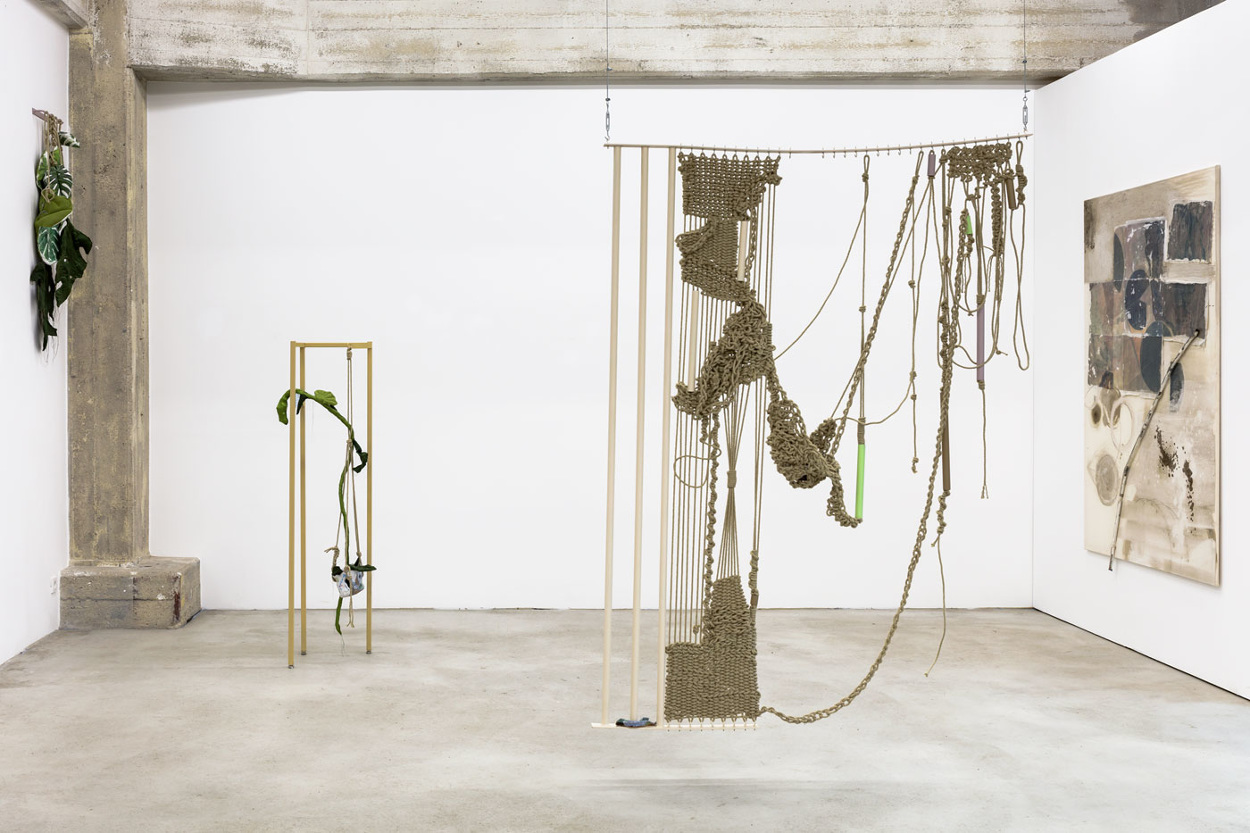 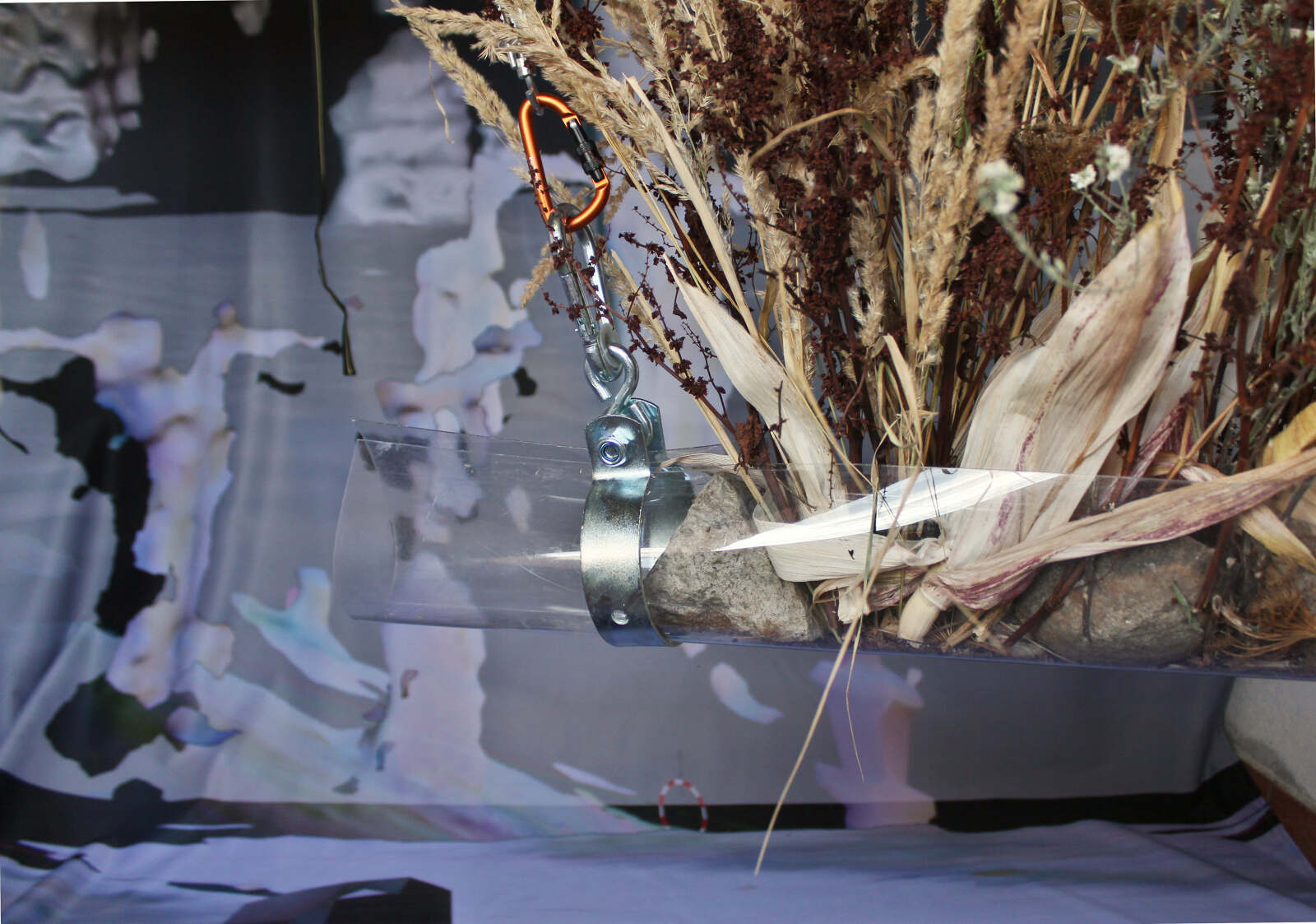 images supplied by the artist.

For two years in a row, Andrea spent one month at Can Serrat International Art Residency. In 2016, she came there as an artist, and was invited as an artist coordinator the following year. She went on walks, observing the inspiring Catalonian mountains, hills, and farms. Andrea always carried her notebook, where she would make drawings of the shapes around her. She was intrigued by the mountain formations and their potential artistic representation. This has lead to her currently taking an actual geological course. There is a certain similarity between the dynamics of the geomorphic layers of the mountains and the human psychological layers. To convey this analogy, Andrea chose tapestry as a medium, as it is also an interlacing resembling the overlapping of the soil structures.

Psychogeography is an important influence for Andrea as she explores the act of walking as the performance itself. Foremost, this interest comes from Guy Debord and his concept of walking, outlined in the ‘Theory of the Dérive’ (1958). The idea is that ‘drifting’ through the landscape allows one to study the space around, inner relations, and the way personal memory is formed locally.

In 2017/18, Andrea kept a journal. Every day she would draw areas and paths she experienced, without a reference to actual scale, but navigating with feelings and memories. At some point she even started developing her own symbol systems and map legends. In this mind experiment, she was examining how the psychology of architecture affects our thoughts and behavior. Moreover, why do we remember certain physical spaces (park benches, bus stops, etc) we see every day, but not the others (blank spots when trying to remember certain locations).

According to a philosophical school of object-oriented ontology, all objects receive equal attention: human and non-human, natural and cultural, real and fictional. Currently prevailing anthropocentrism is the privilege of humans as ‘subject’ over non-human beings as an “object”. Andrea has researched these issues a lot, dedicating it, for instance, such artworks as Synesthesia (Or Memory) Of Soil (2018) or Looking For Something Low Maintenance (2020). Our history record, ethics and linguistics have constructed an unjust cultural hierarchy.

Humans are a priori the exclusive nature masters, whereas trees, rivers, rocks, and animals are all exploited as objects. However, as Timothy Morton states in his ‘Being Ecological’, unlike plants, we can choose not to emit excessive amounts of carbon. We are not special in the universal object system, but we have perceptible consciousness and responsibility. All the relationships, including relationships between people, distort related objects in the same way as human consciousness, and exist on a par with each other.

In addition, Andrea deals with experimental writing. Some of her poems were published in TEXTUR Magazine. Andrea names Anne Carson (Canadian poet, researcher, and professor) as the creative writer who inspires her most. ‘Ich Sitze Mich Im Urlaub’ (2020) poem and ‘But An Archive Of What?’ (2019) video performance unconventionally combine English and German languages inside the poetic text. This interlinguistic challenge allows for various cultural contexts, phonetics, and metaphorical diversity.

Andrea is very active and divergent in her practice. Yet for the artist her entire journey, however chaotic and incidental it may seem at first, is coherent and meaningful. Her focal points encapsulate her work. Continuous art exercises make sense as a process, a lifelong exploring adventure. Just like a mental map of the places she has explored, her artwork archive constitutes a unibody with recurrent aesthetic patterns and unsettling issues. Andrea’s intention to show alternative human-environment relationship models appears to be her personal artistic contribution to the global sustainability vision. Through the story she tells, she aims to make people aware: make people care.

Andrea Garcia Vasquez was a resident on PKRD 26 June -September 2015. You can learn more about her artistic practice on the website, Instagram page, and Vimeo channel.