Natacha is an emotional painter and a confident performer. She who loves Jazz, birdsong, and finds dark techno to be the best for mixing paint. Natacha is deeply influenced by Modernism and the Baroque époque as well as Christian art. Natacha cites big names; Picasso, Matisse, Soutine, Van Gogh and contemporary artists such as Luc Tuymans, Louis Fratino, Alex Becerra, Daisy Parris, Antonia Showering, Stevie Dixx  etc. Currently she’s indulging and studying Francis Bacon. There are books of his work next to the easel and a play of liquid forms and hues of violet in her sketches.

Natacha’s work is highly self-reflective, and she chooses to share herself with the spectator. She pours her inner world and feelings onto canvas and boldly explores human vulnerability and fragility in her performances. She stands relentlessly strong for the absence of boundaries between life and art. – They are entangled: communicating, supporting, inspiring each other to construct what feels like her discourse throughout images. As a highly visual individual she needs to eat with her eyes, it is a physical urge to paint. This undeniable obsession with the imaginary manifests in a complete devotion to the practice. Artistic expression organically lives within an artist, so how one could separate this part of their own identity, caging it, denying it oxygen by taming it and taking it for a walk just occasionally? Natacha is confident, she knows that she is supposed to paint. 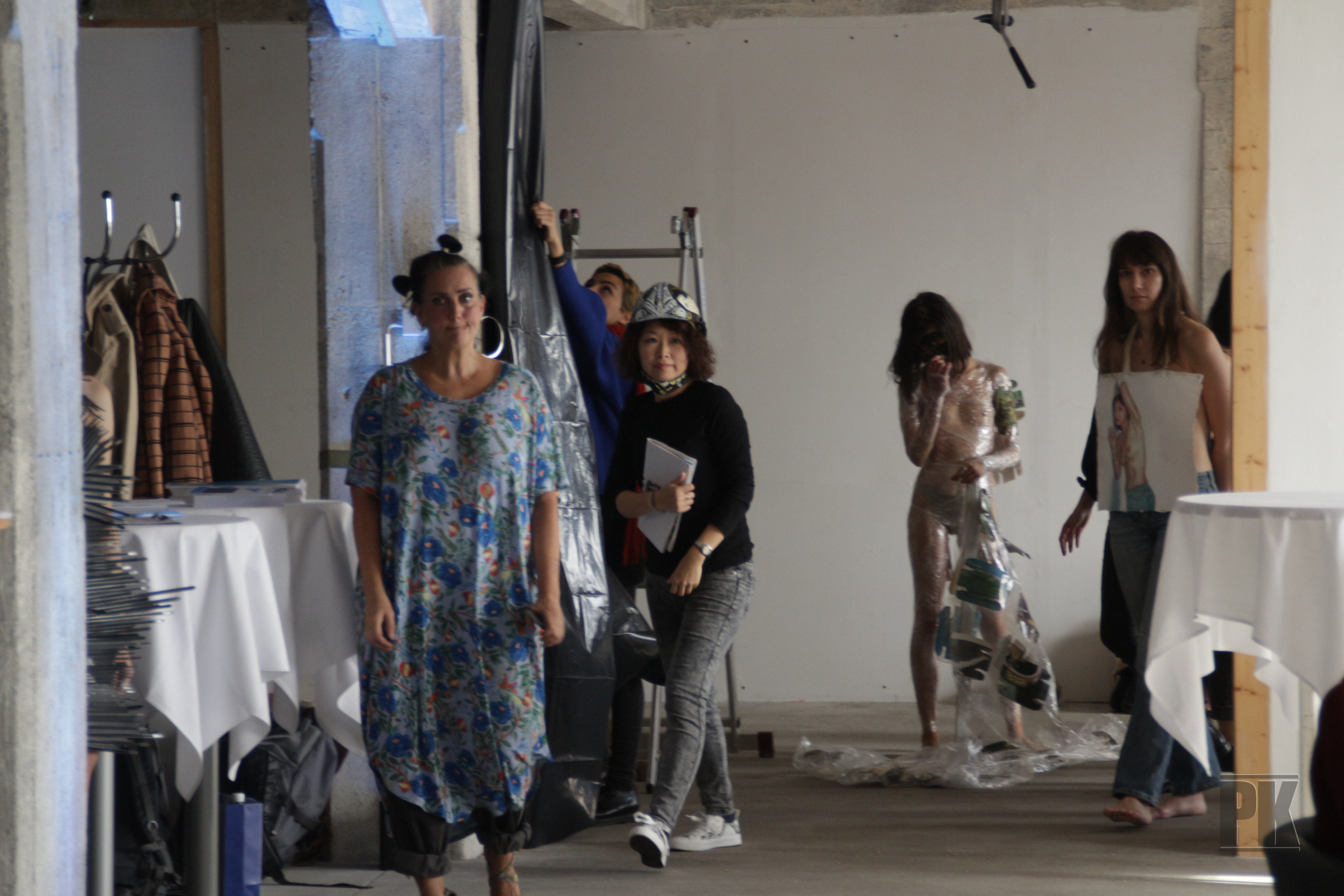 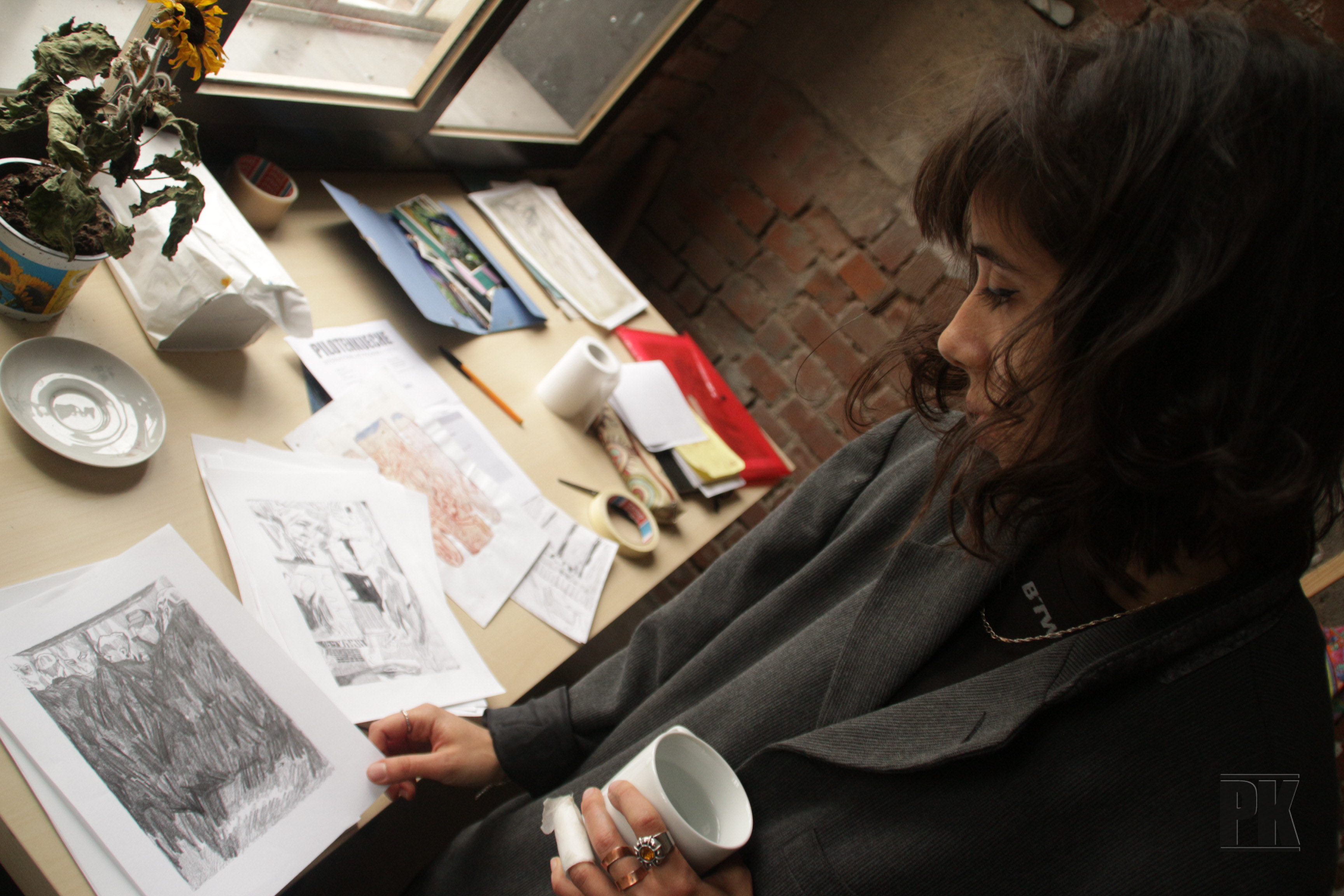 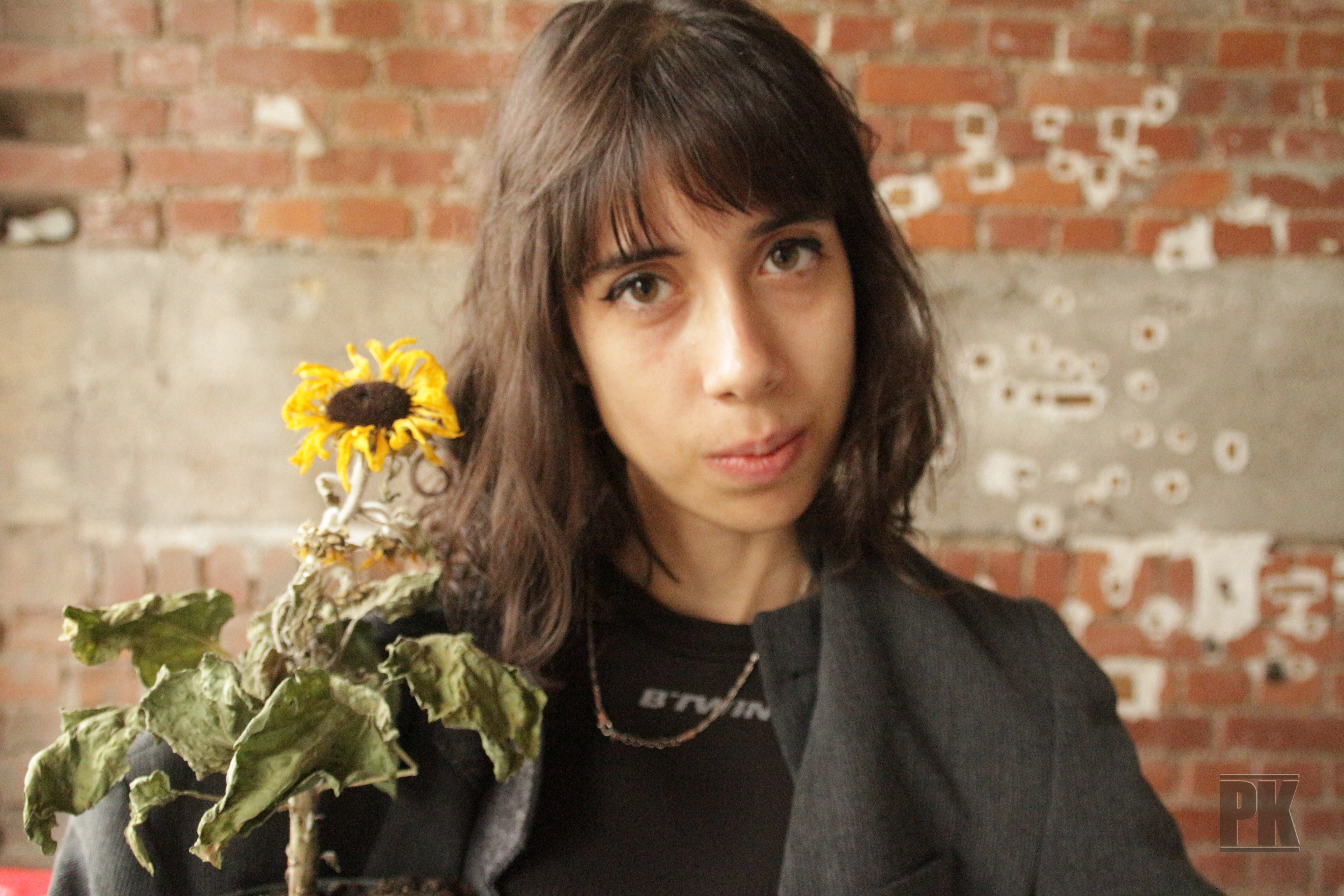 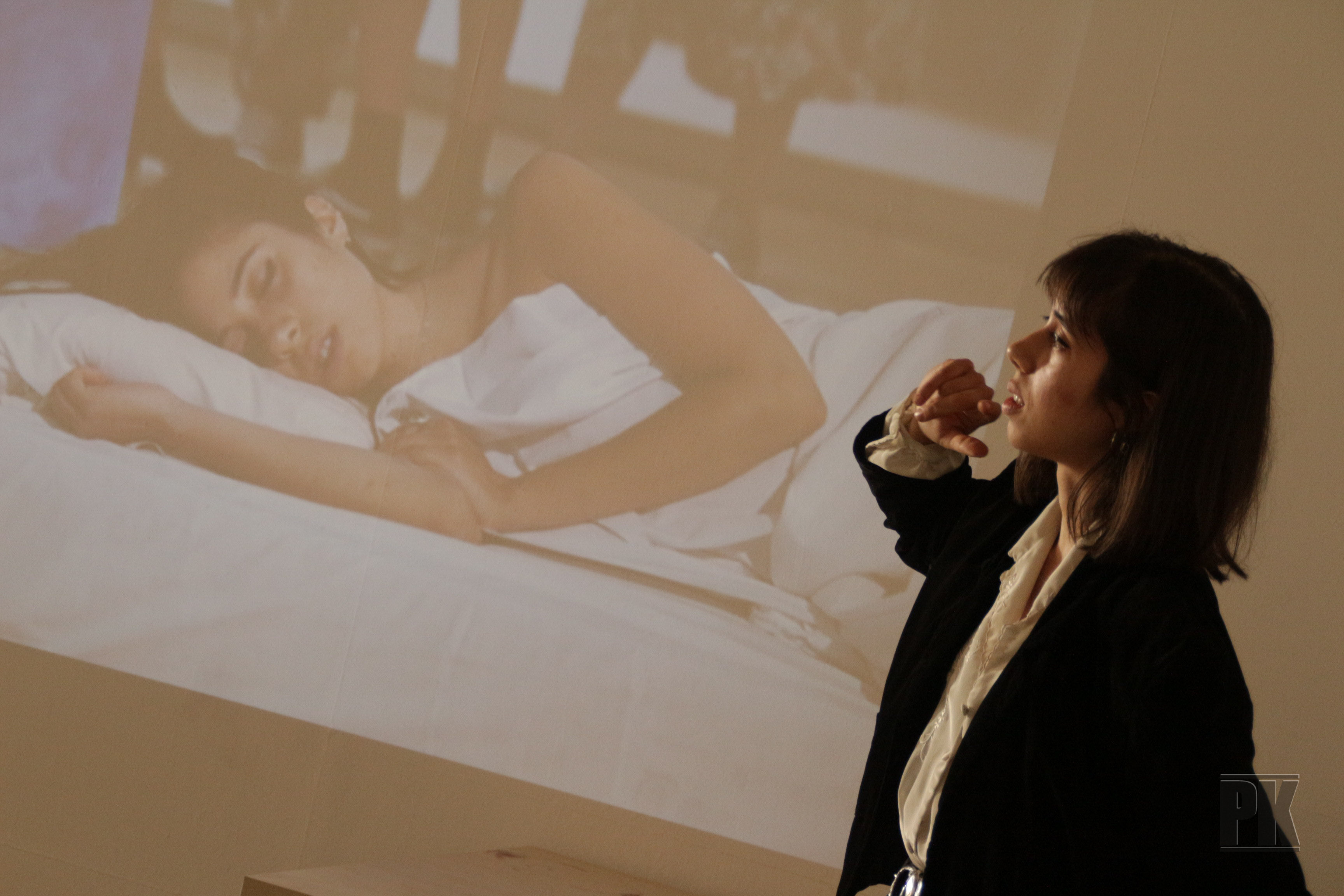 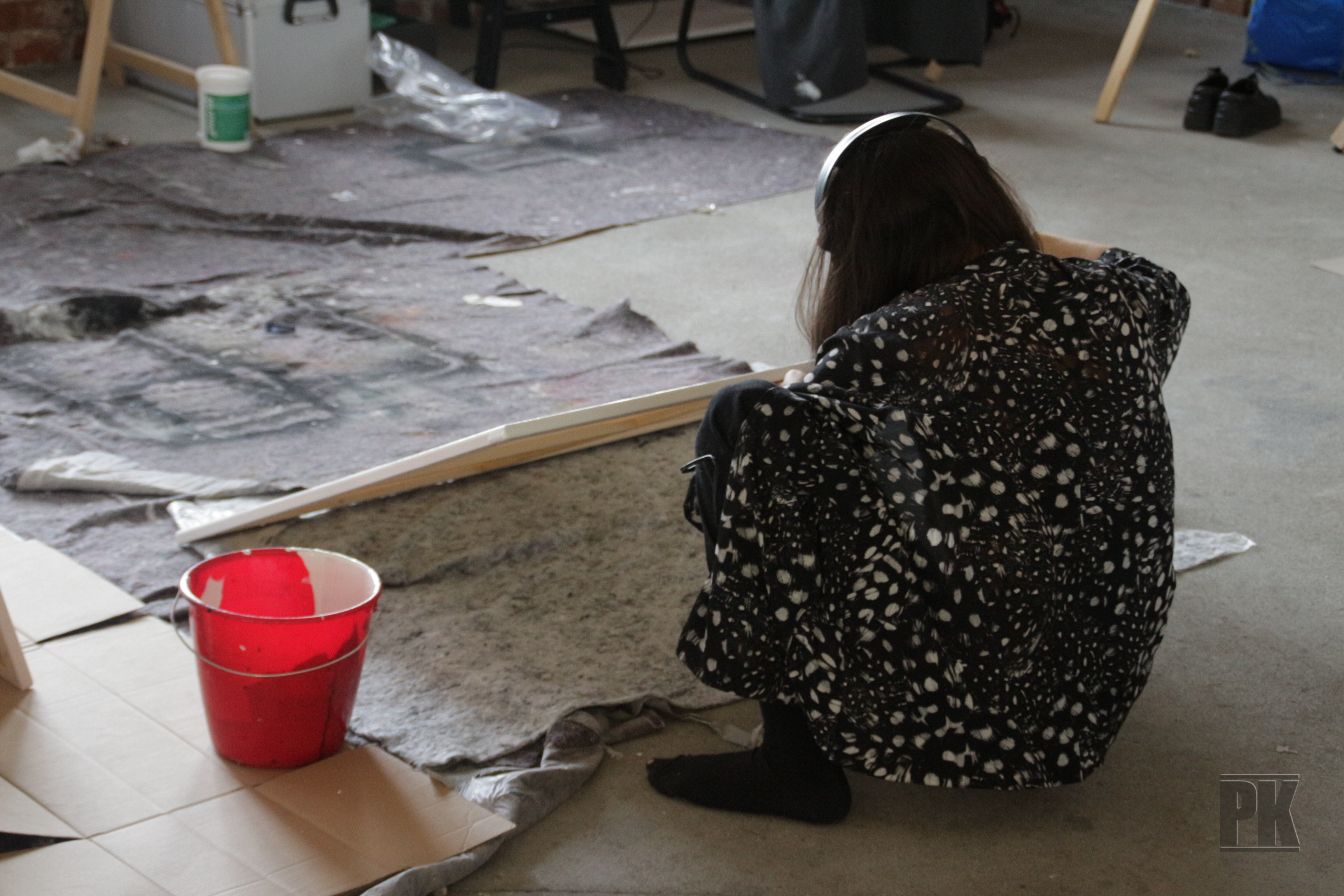 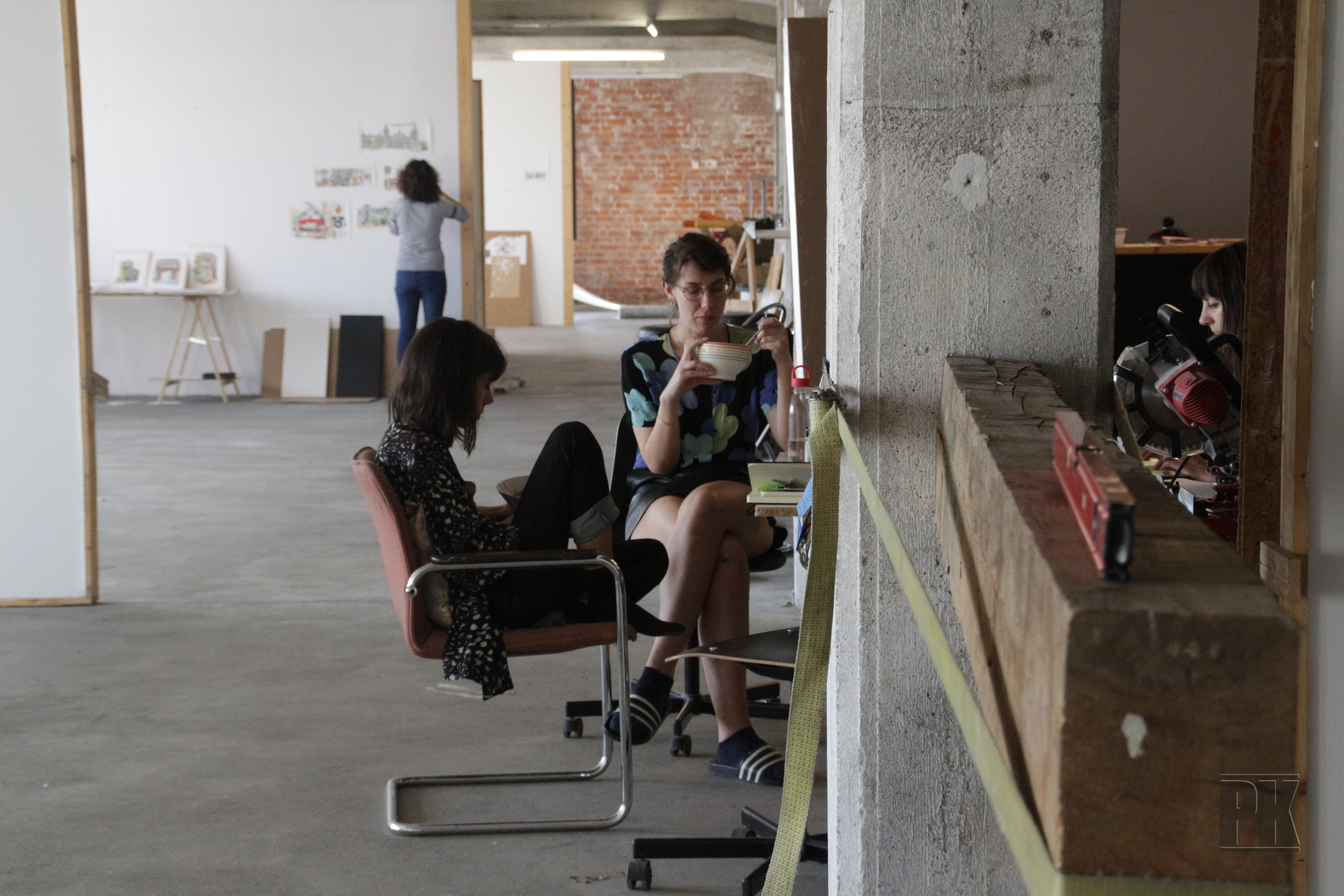 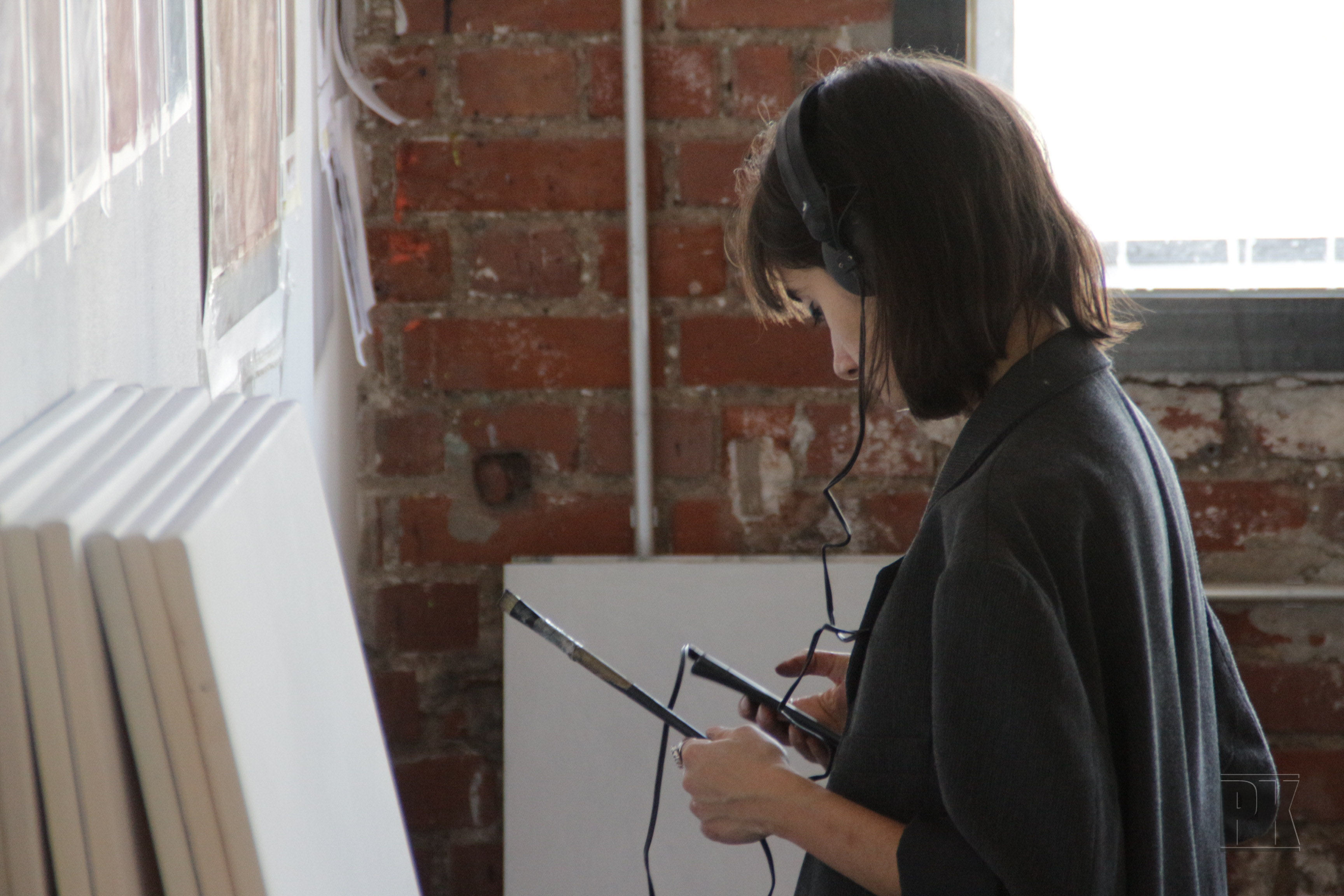 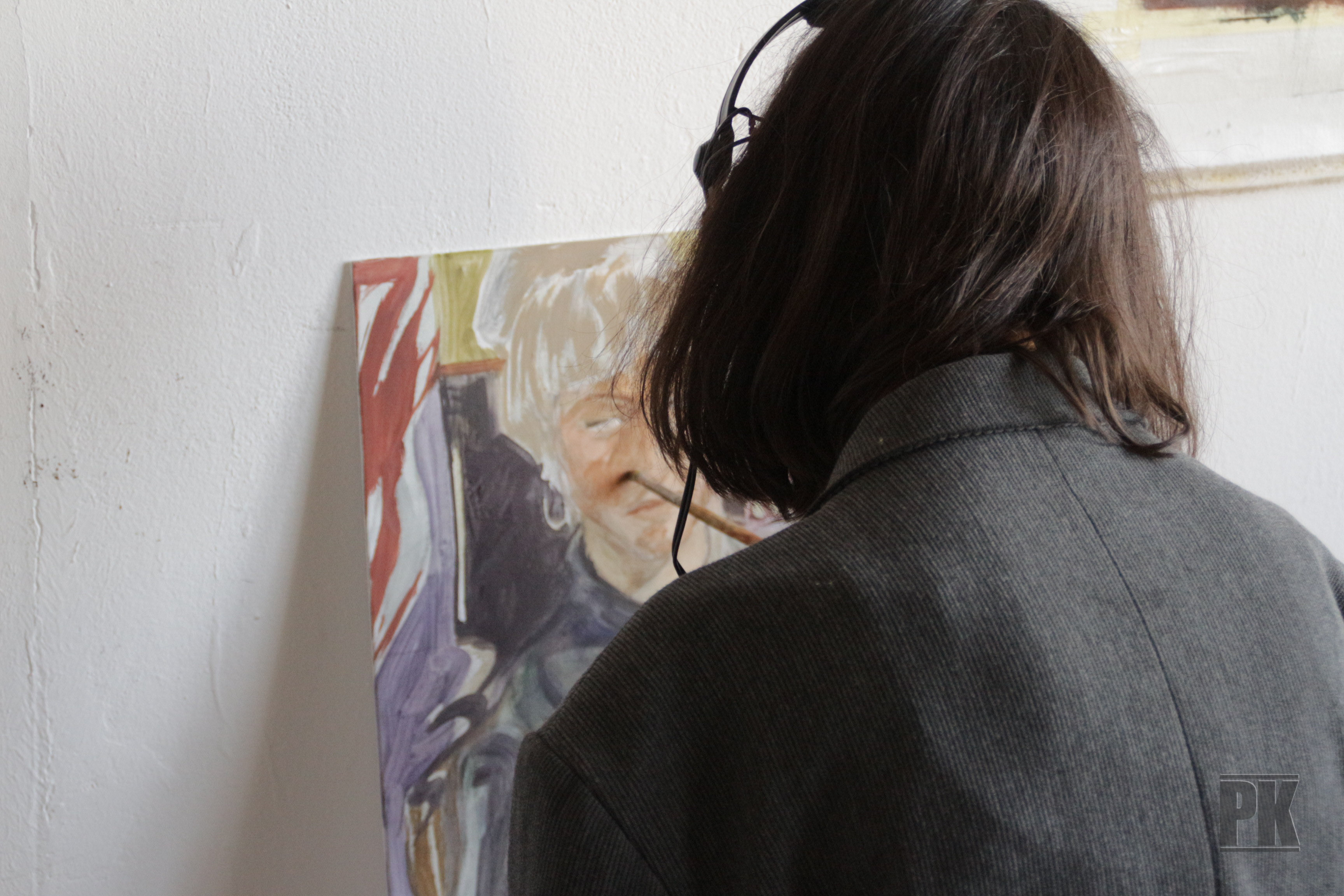 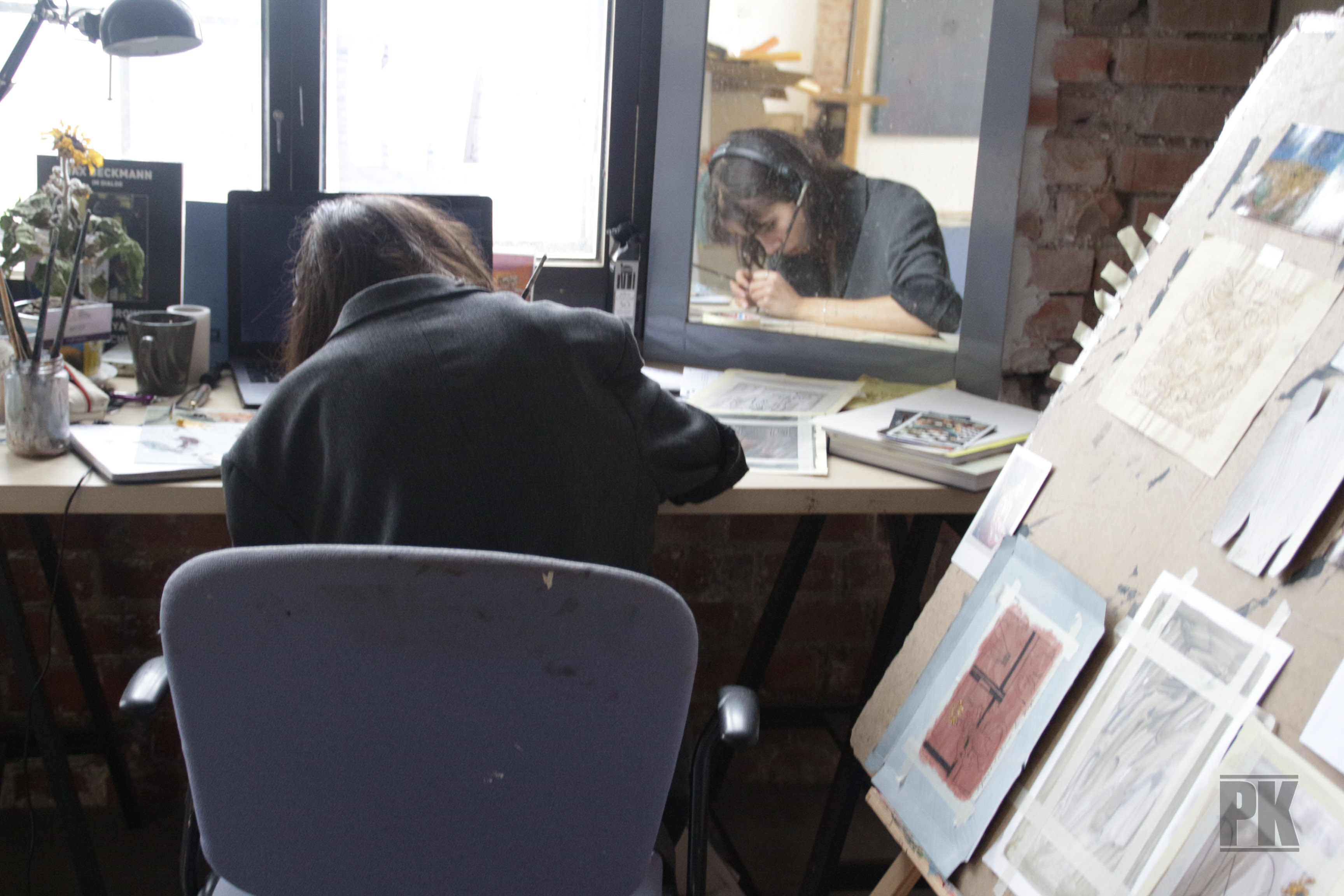 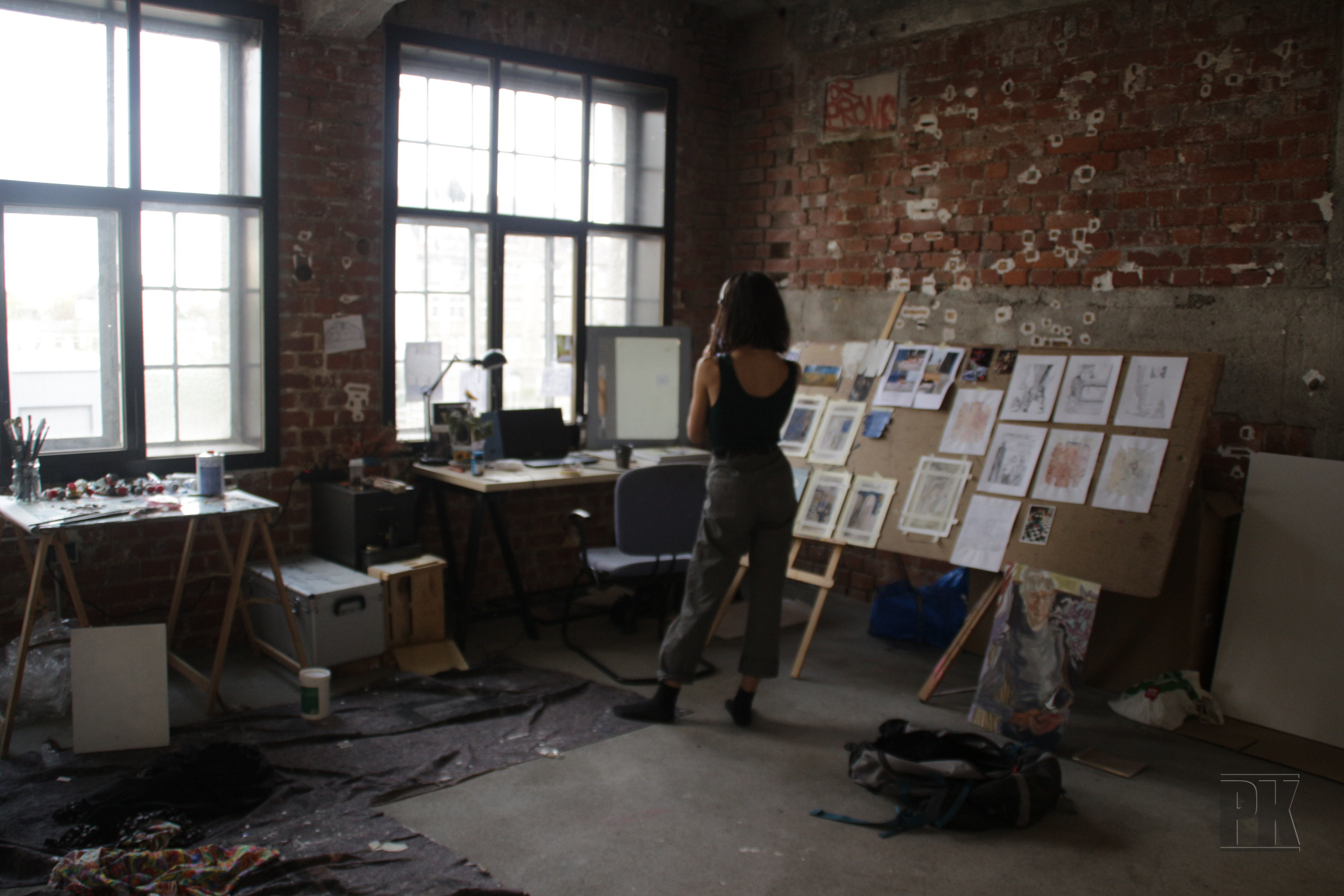 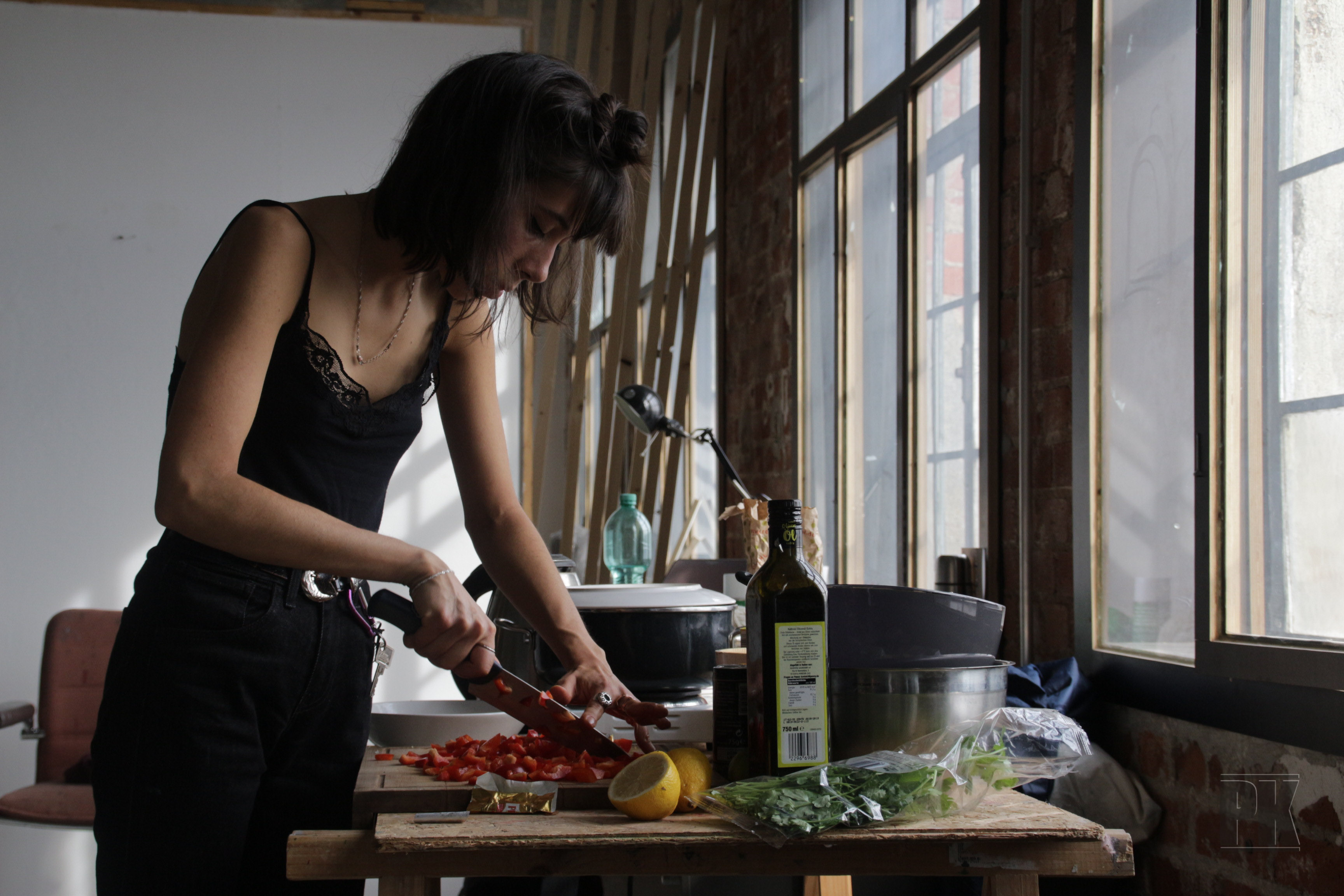 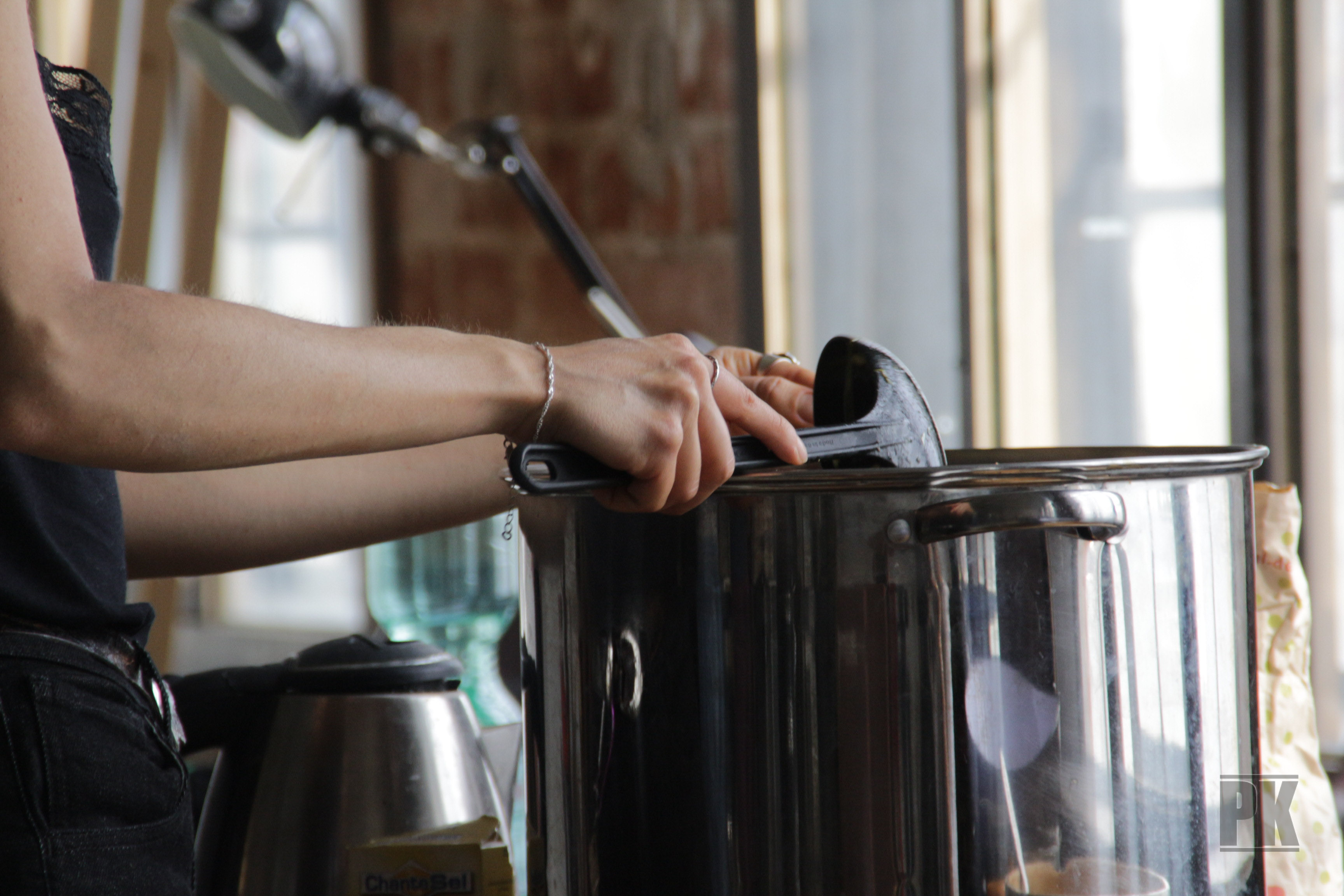 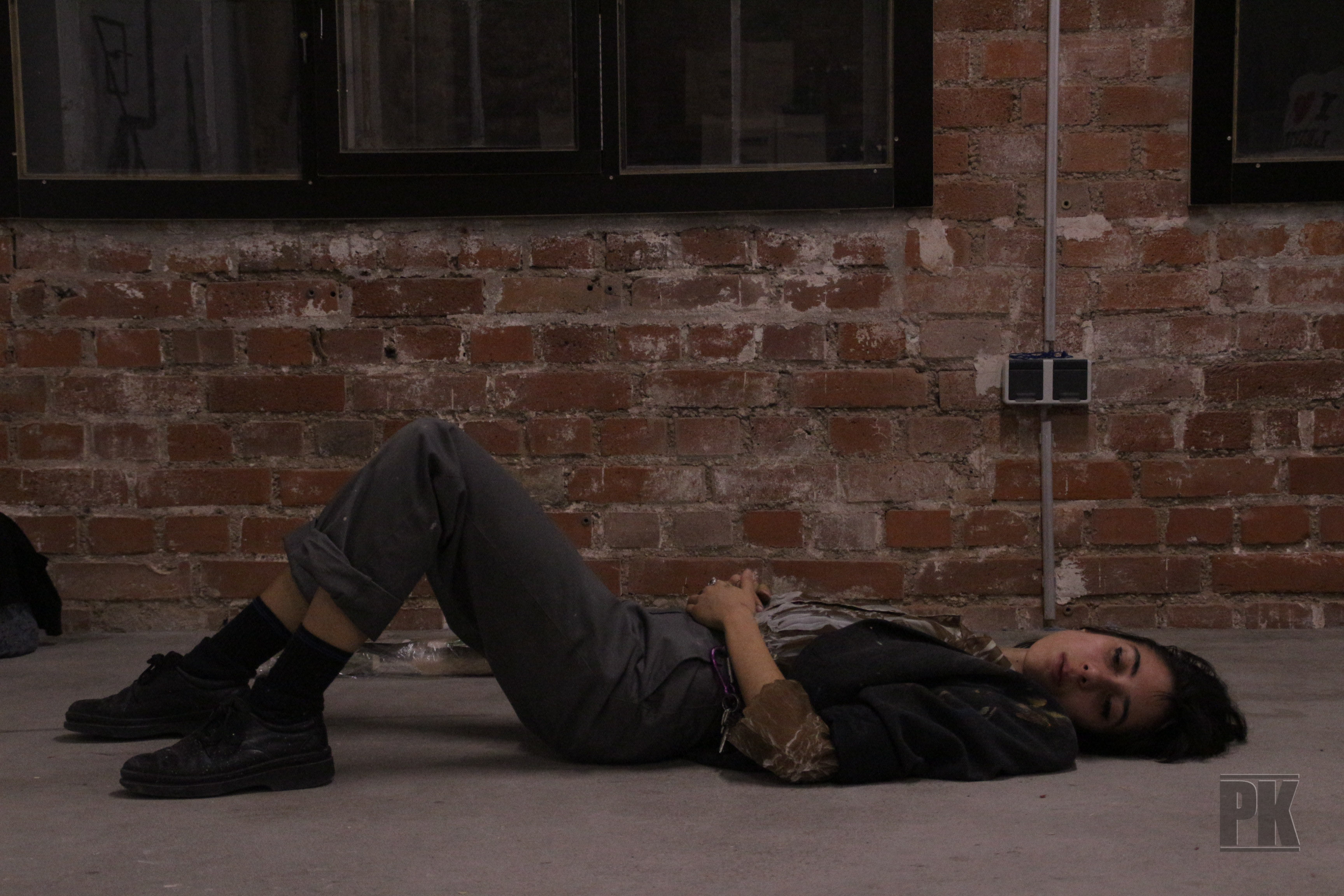 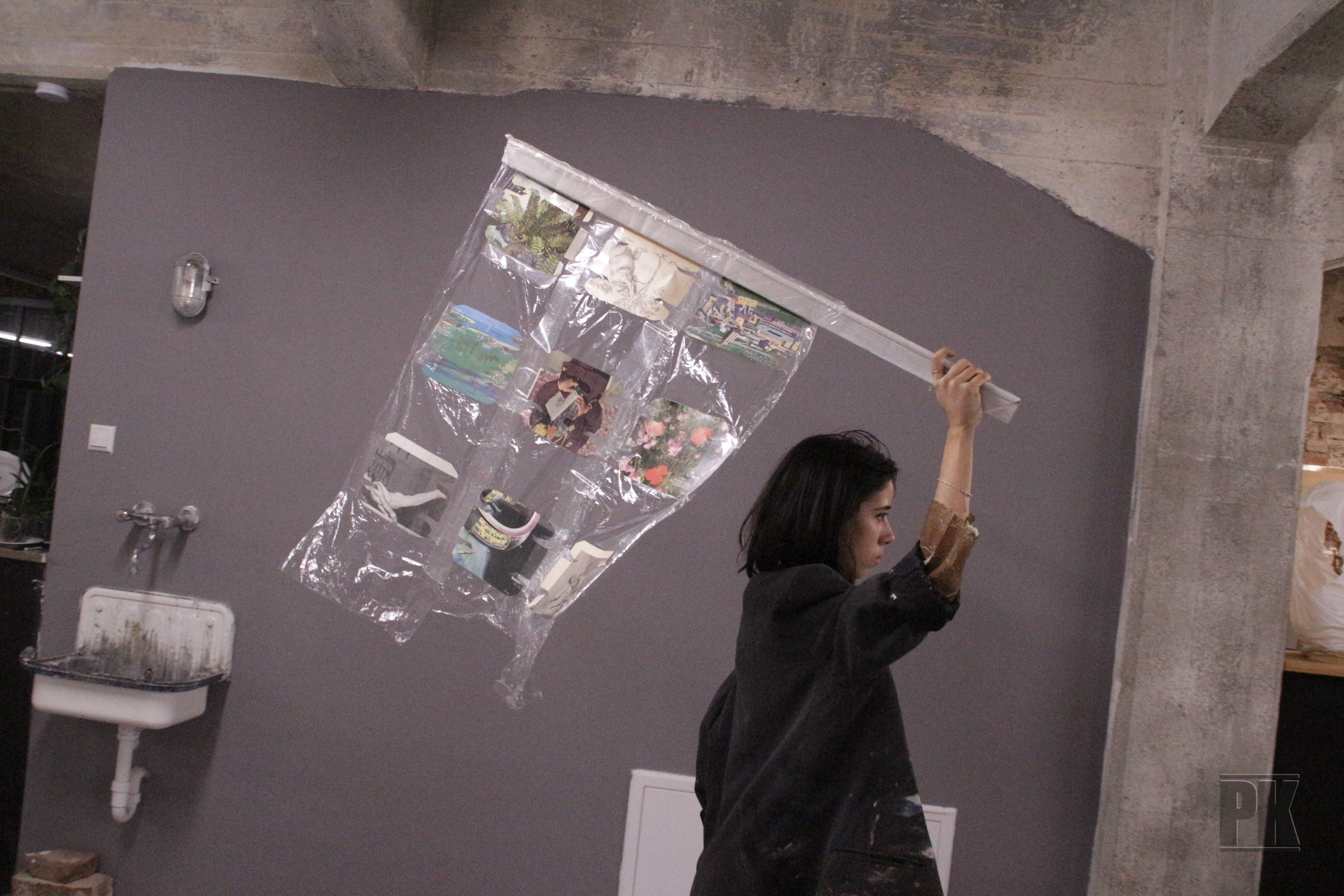 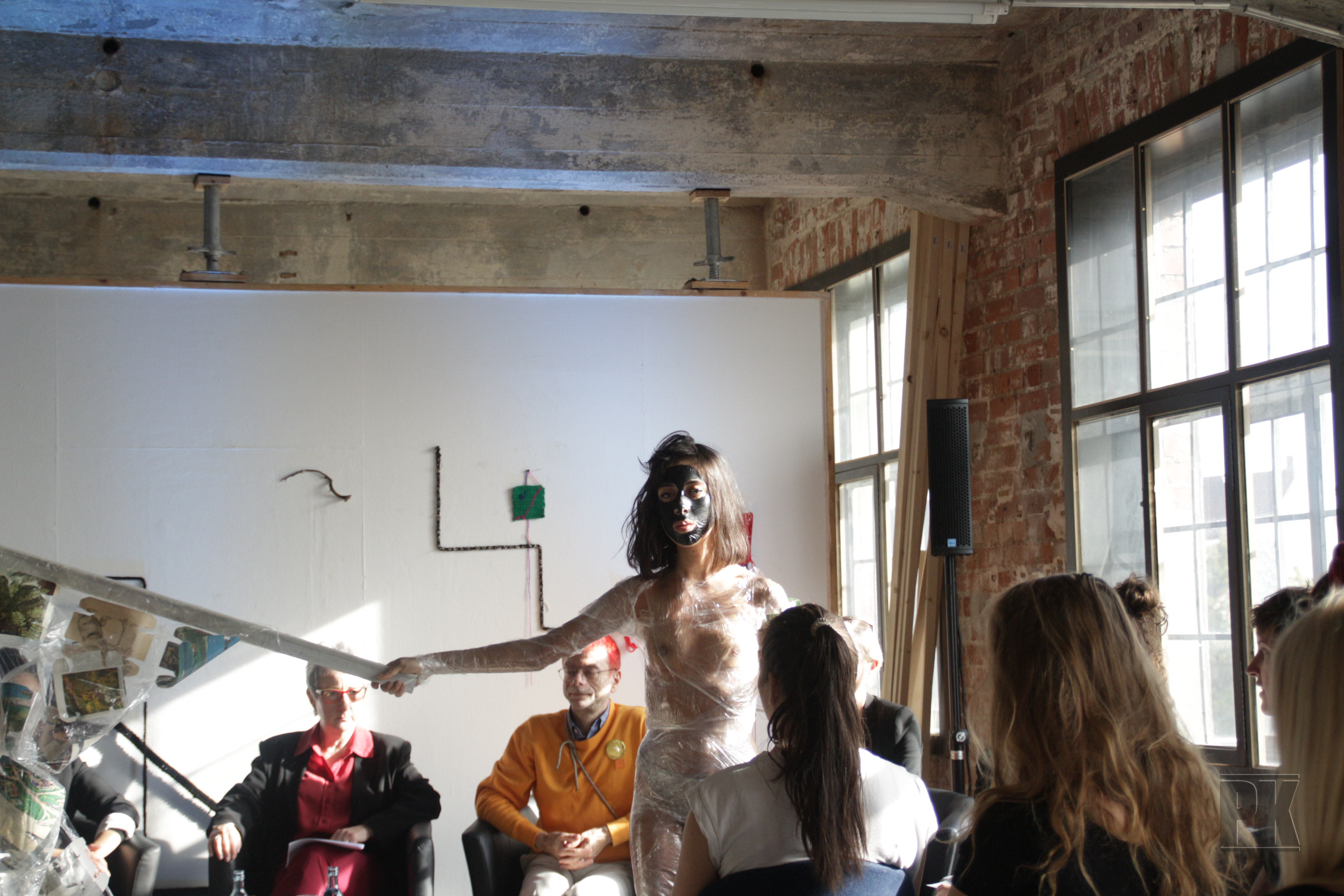 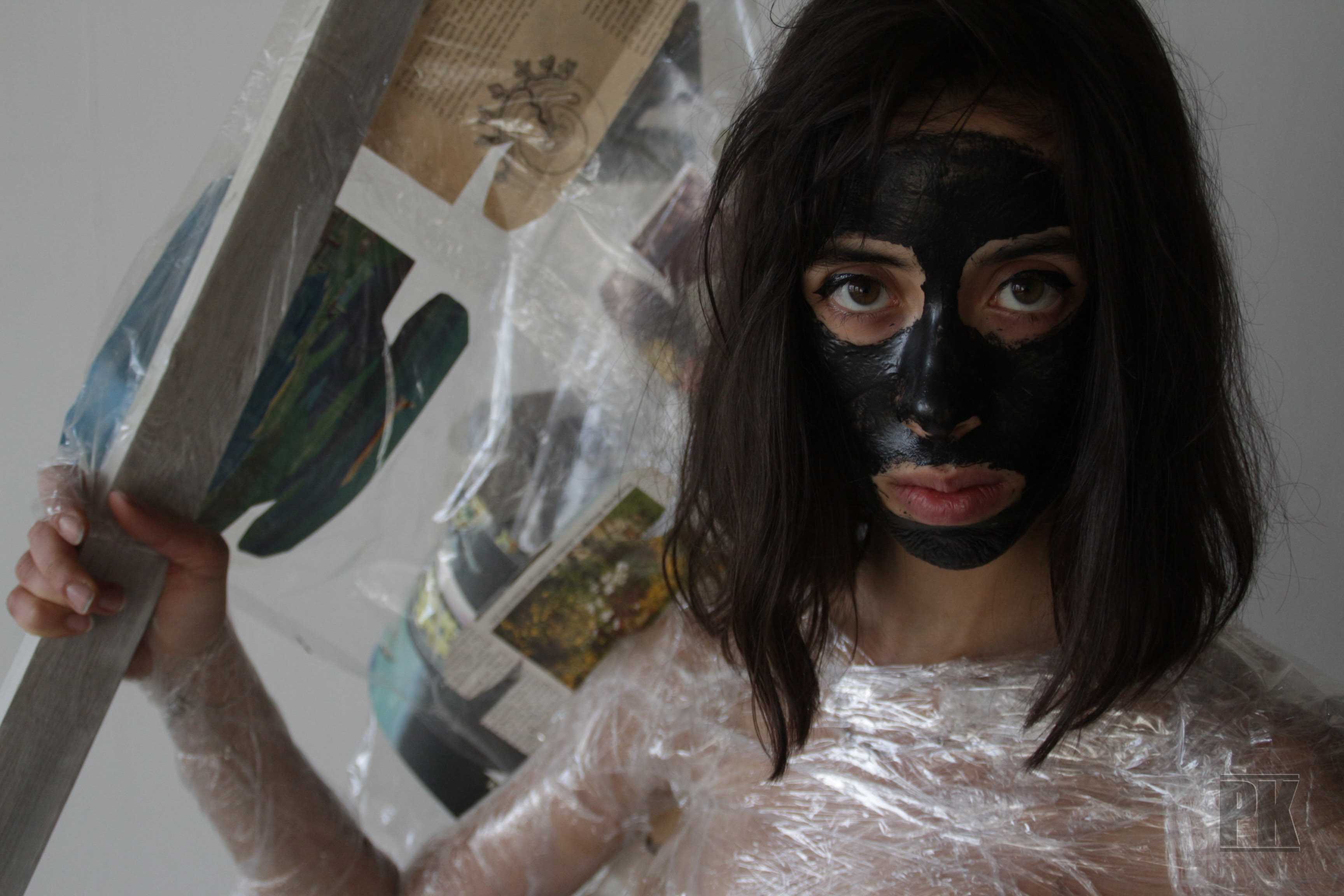 We talk with Natacha and Daniel in her working space at PK, about creating, but mostly about destruction. They both seem keen on destruction as a form of construction.
Daniel’s work is very geometric and mathematical, he deconstructs it down to a triangle, whereas Natacha’s approach is more sensual, and she refers to the metaphysical, the soul as the primordial form and intense irrational experiences coming from the very most intimate, allowing to reach primordial archaic human state embedded in an individual. She extracts the essence, uncovering our core values. To ask ourselves, to the communities, what do we stand for? We notice that the theme of destruction is being actualized and tackled from different angles by several participants of PK, perhaps a reflection of the happenings on a global scale. Damaged connections with nature, change caused by deforestation, mono-culture agriculture, irresponsible industrialization, excessive consumption etc.

Although Natacha defines herself as a painter, her performance piece “Crucificação e Deposição de Cristo (Crucifixion and Deposition of Christ)” serves as a strong artefact of her convictions. Natacha uses her body as a tool. After depriving herself of sleep for 3 days, she arrives at the exhibition space exhausted and in a half-conscious state. Then Natacha goes to dream, making herself a part of the artwork, exposed, fragile and undefended. Natacha says that she wanted to be there fully – as an artist, as an art piece and simultaneously displaying the fragility of the human condition. She Embraces the terminal devastation of life, resetting back to essential values and sometimes giving a rayon of hope.

In order to understand more about this artists start by Charles Mingus and Herberto Helder, then head to her instagram. Here’s her website.