“Ritual cleanses violence.” On Friday 14 September, Chelsea Markuson performed 000 at the Leipzig Jewish Synagogue Memorial. The memorial stands on the former site of the synagogue that was destroyed on Kristalnacht in 1938. It was a night when shards of glass from broken windows filled German streets. In Leipzig alone, more than 500 men were taken to Buchenwald concentration camp.

Chelsea’s time in Leipzig has been invaluable. It has helped her reflect on her family history in layers that will surely continue to manifest long after she returns to the States. Reflection is  particularly pertinent this time of year. The days between Rosh Hashanah (Jewish New Year) and Yom Kippur are dedicated to this practice. 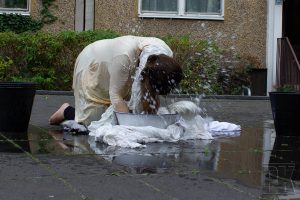 She chose to do the performance at the time when practicing Jews would have been arriving at the synagogue for shabbat evening services.

“I found that during my physical actions I was beginning an attempt to channel the energies there at the site. What I found is that there is nothing there. It is a void of nothingness. Sadly I was anticipating the opposite.”

Chelsea will be performing 0000 at the opening of Corporal Temperature at 19.00. It will be interesting to see what energy she channels in a different environment. Will she feel liberated or empty?