In a lighthearted way, he describes himself as a medium, or a shaman, and not just a regular painter. His art emerges in our own dimension after serious contemplation and reflection. The first quality you could sense about him would be the otherworldly concentration you see in his eyes. However, the gaze is observing rather than judging. It doesn’t take long to get into deep philosophical discussions with him. Who is this mysterious figure you might ask? Well, the man in question is Ziemowit Fincek – a polish painter whose shapely canvases fill all four walls of his PILOTENKUECHE studio.

Why does Ziemowit call himself a shaman?

“In a creative process you’re not entirely conscious of what you are doing, and the most interesting things emerge from the subconscious. Painting is like a visual dance. Producing ideas that float from the inner psyche, gives them depth and mystery which couldn’t be achieved by other ways of creating.” – affirms Ziemowit. It’s not free flow of visuality that comes through and remains. Besides, Ziemowit uses spontaneity as a way to translate the topics that he is fascinated about, such as how we perceive ourselves and our environment in the world that is constantly in flux.

With his series Vaccine (2019) Ziemowit unknowingly forecasted condition the world will inhabit in the following years. These paintings, whose names refer to the number of days between the creation of Ziemowit and his creation of each canvas mark the passing of time. Correspondingly, the names refer to the HEOL (Human Expression of Life) and were finished just before the global pandemic. The artist  later installed pieces on abandoned buildings in poor neighbourhoods. His idea was to inject some art, goodness, or light to these forgotten areas.

Intriguing as it may seem, this wasn’t the first time Ziemowit predicted the future. For instance, the other time it happened was when he painted a polish airplane engulfed in flames months before one tragically crashed in Smolensk.  In 2020 artist returned to the theme of virus with his series Fantastic virus.  Indeed, this time he was reflecting on the current ongoing global crisis. A series of abstract paintings portray different life forms invisible to the naked eye.

Reflections on time and scale

Ziemowit likes to meditate on the idea that we are unable to grasp the scope of the microcosms and macrocosms, just as we are unable to comprehend our own appearance to other life forms. Above all, time is an essential topic in his works, it all circles back to it. 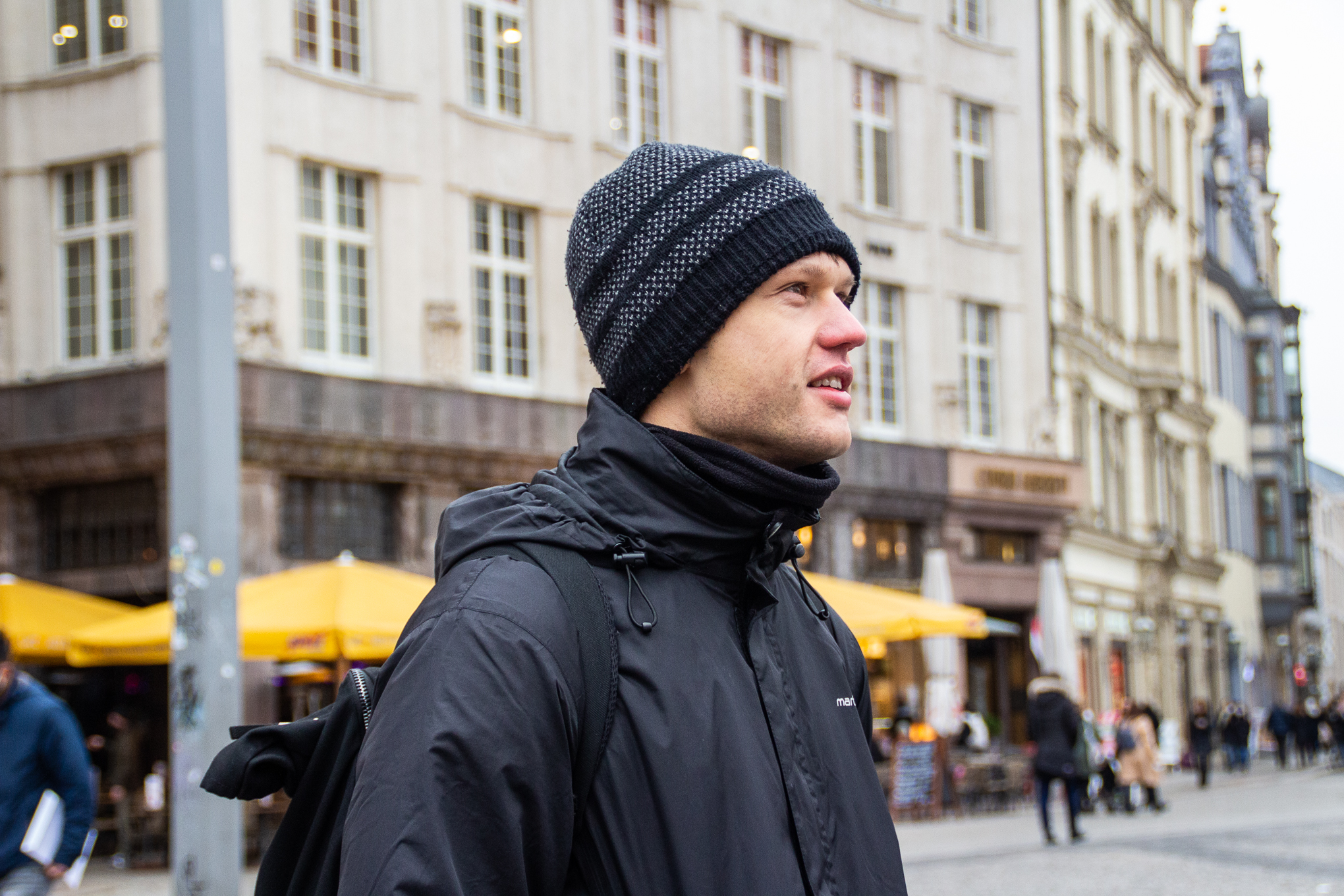 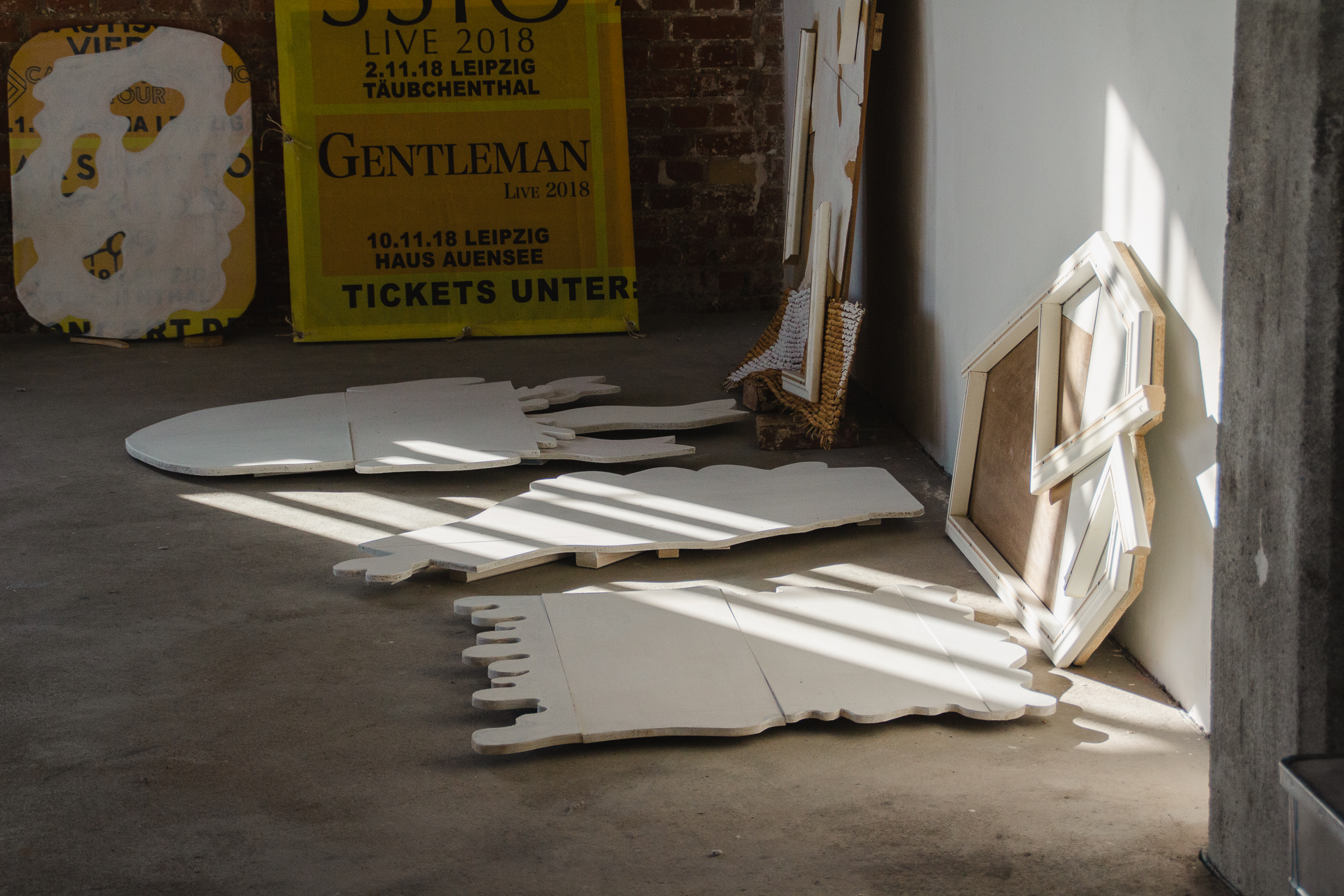 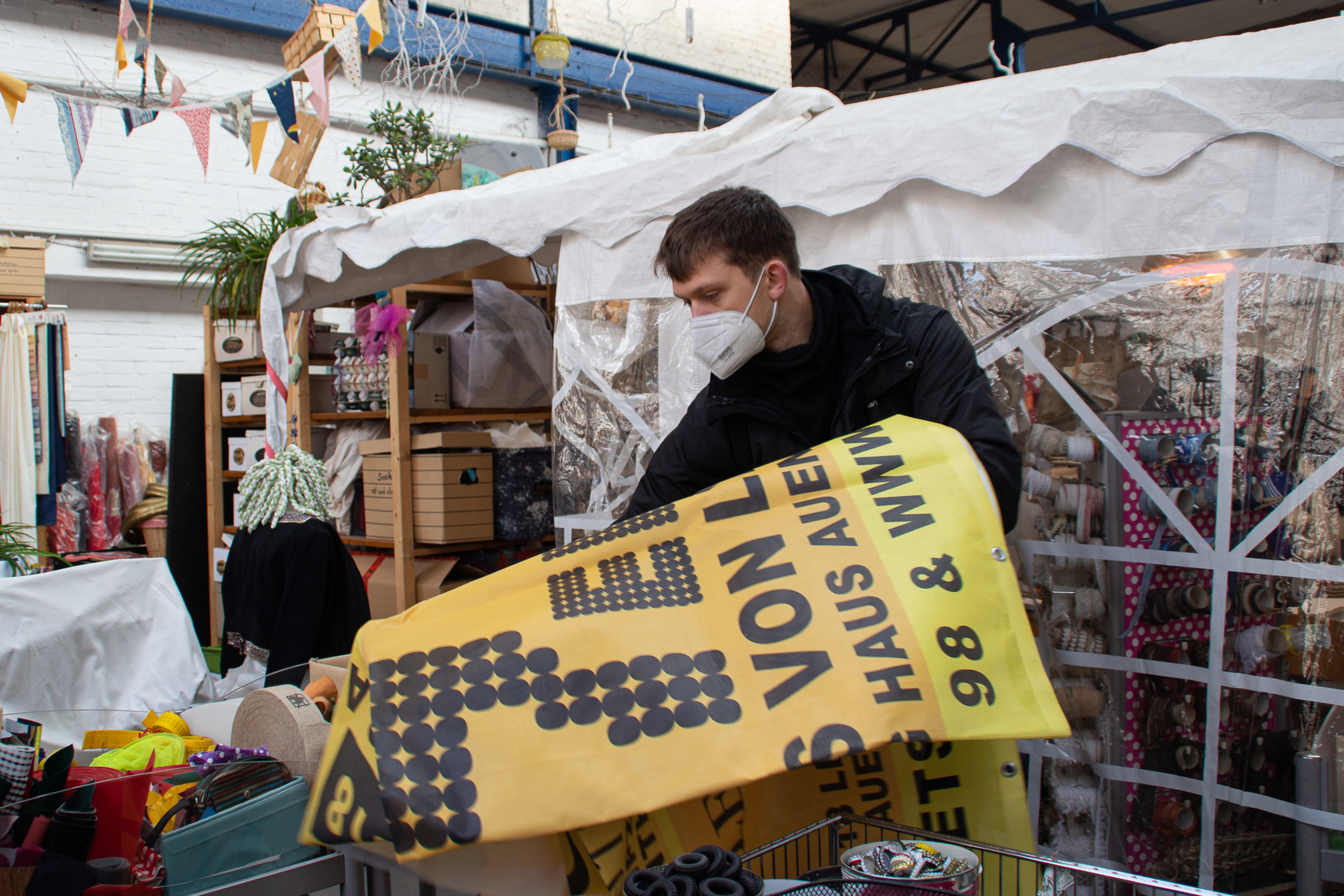 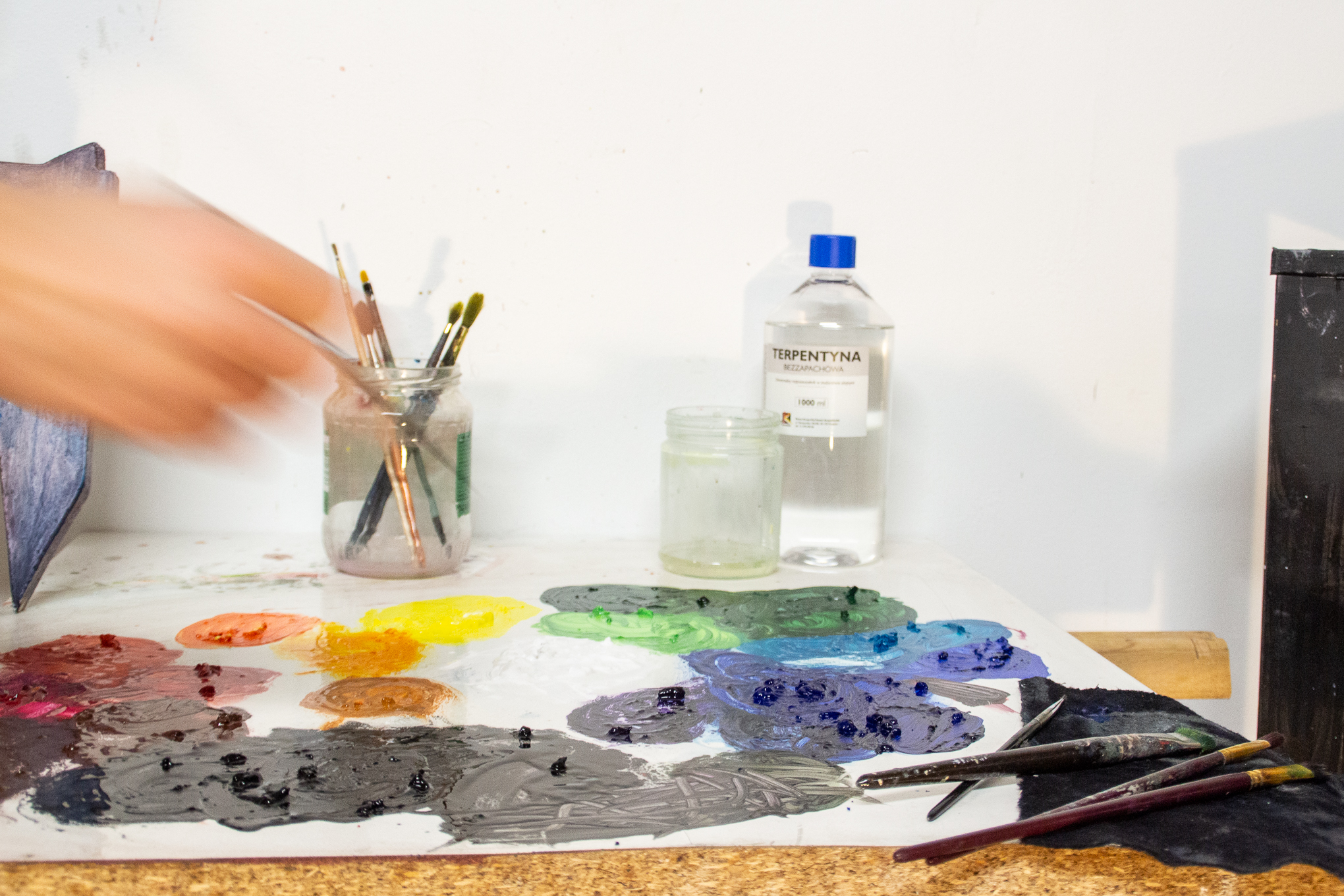 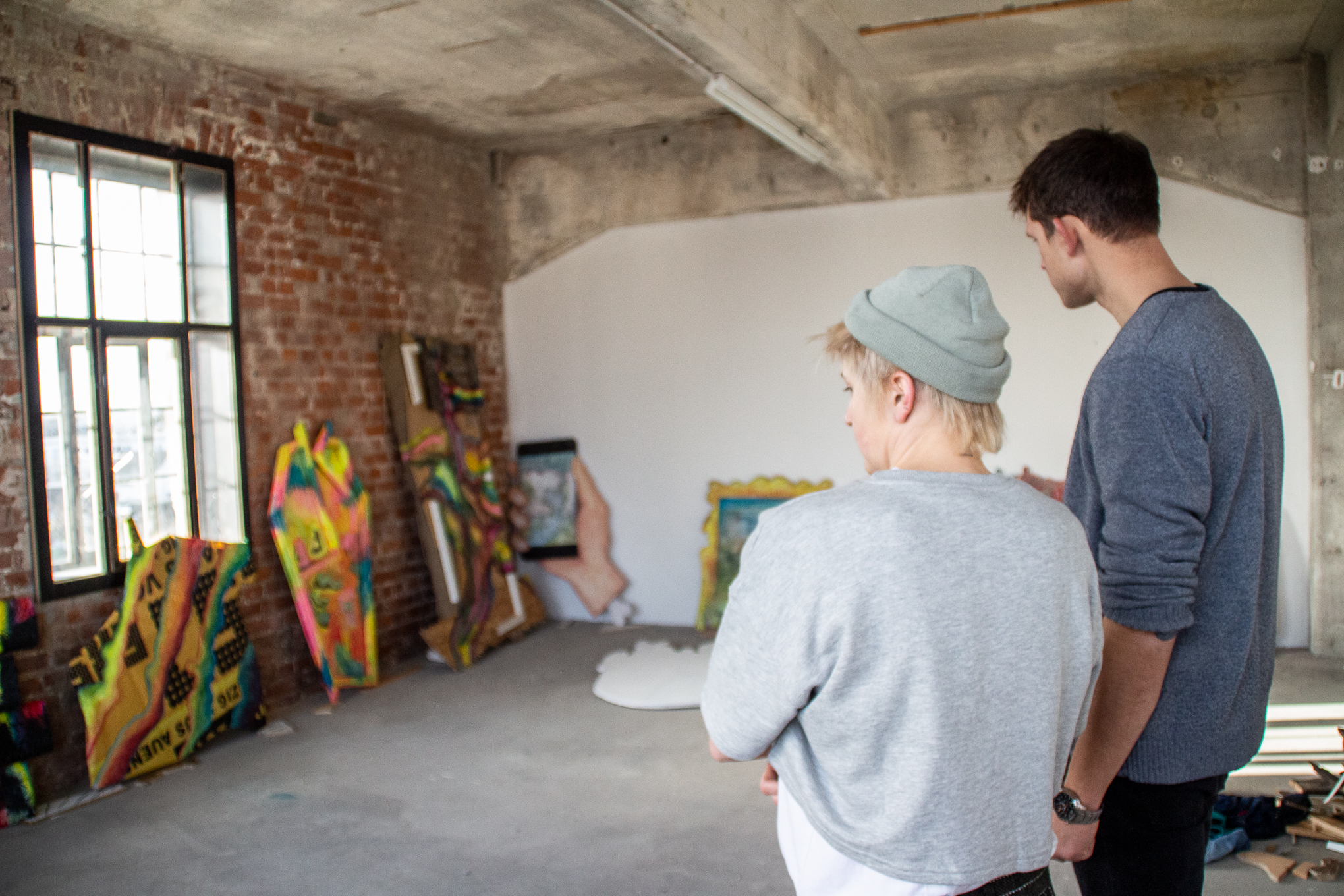 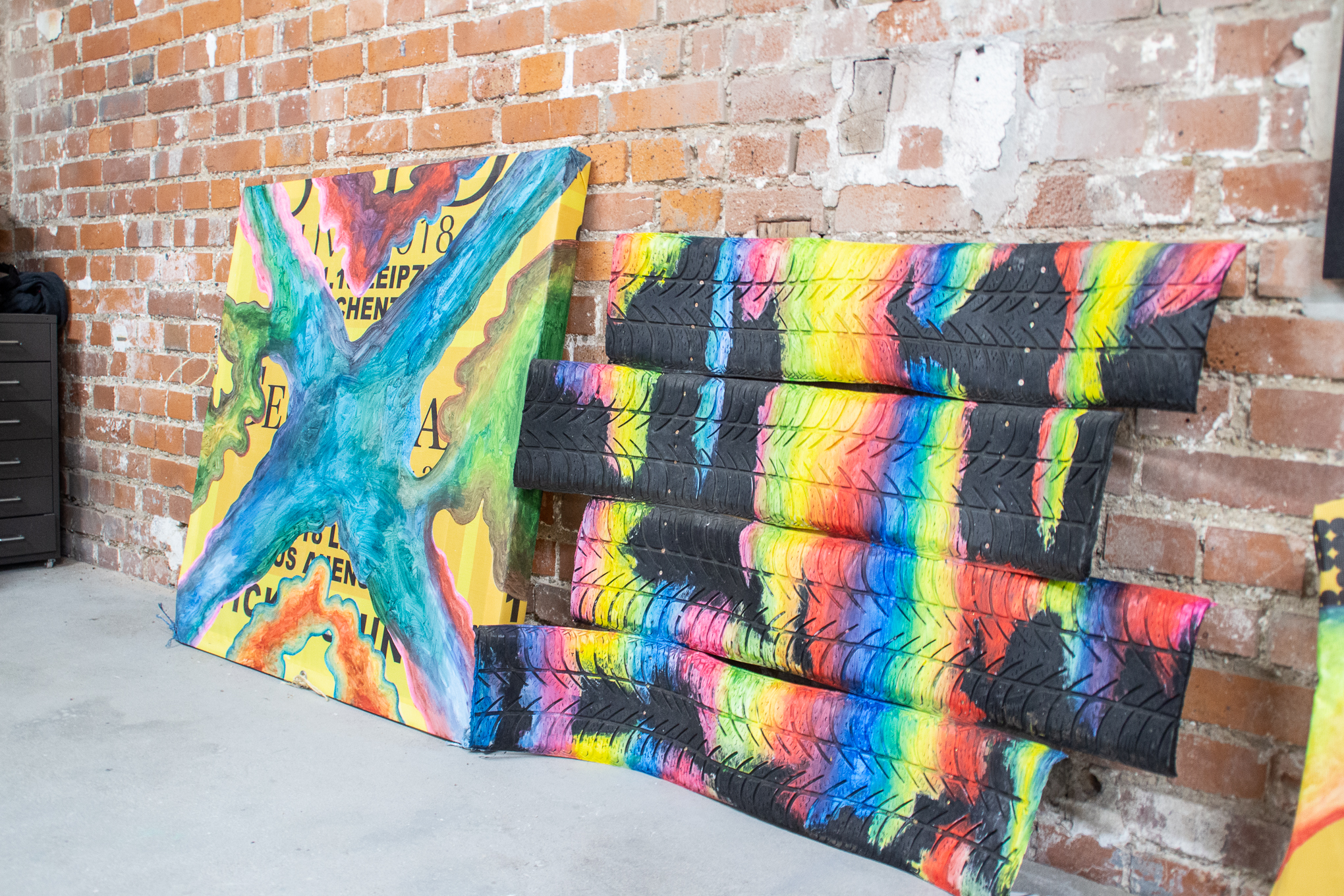 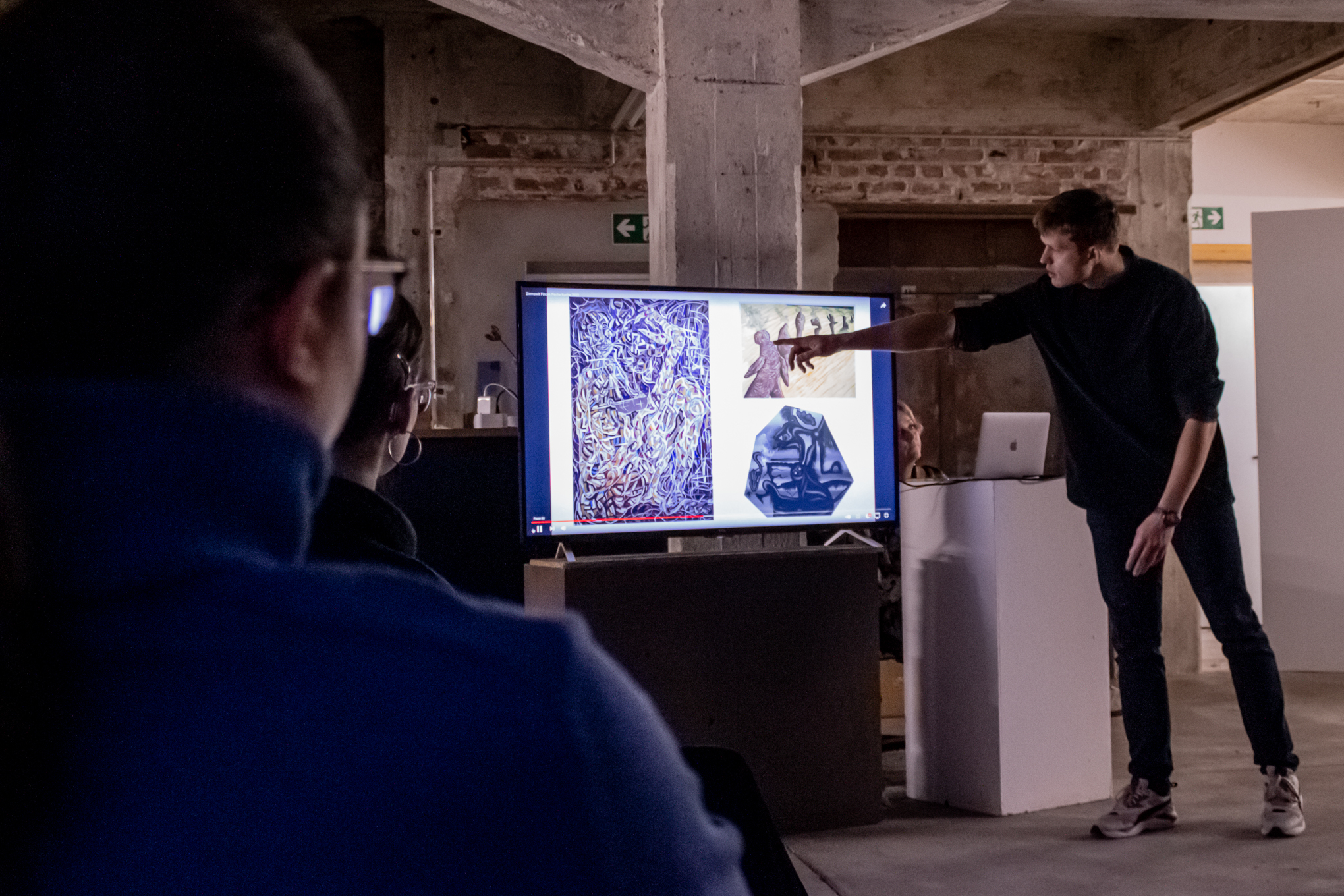 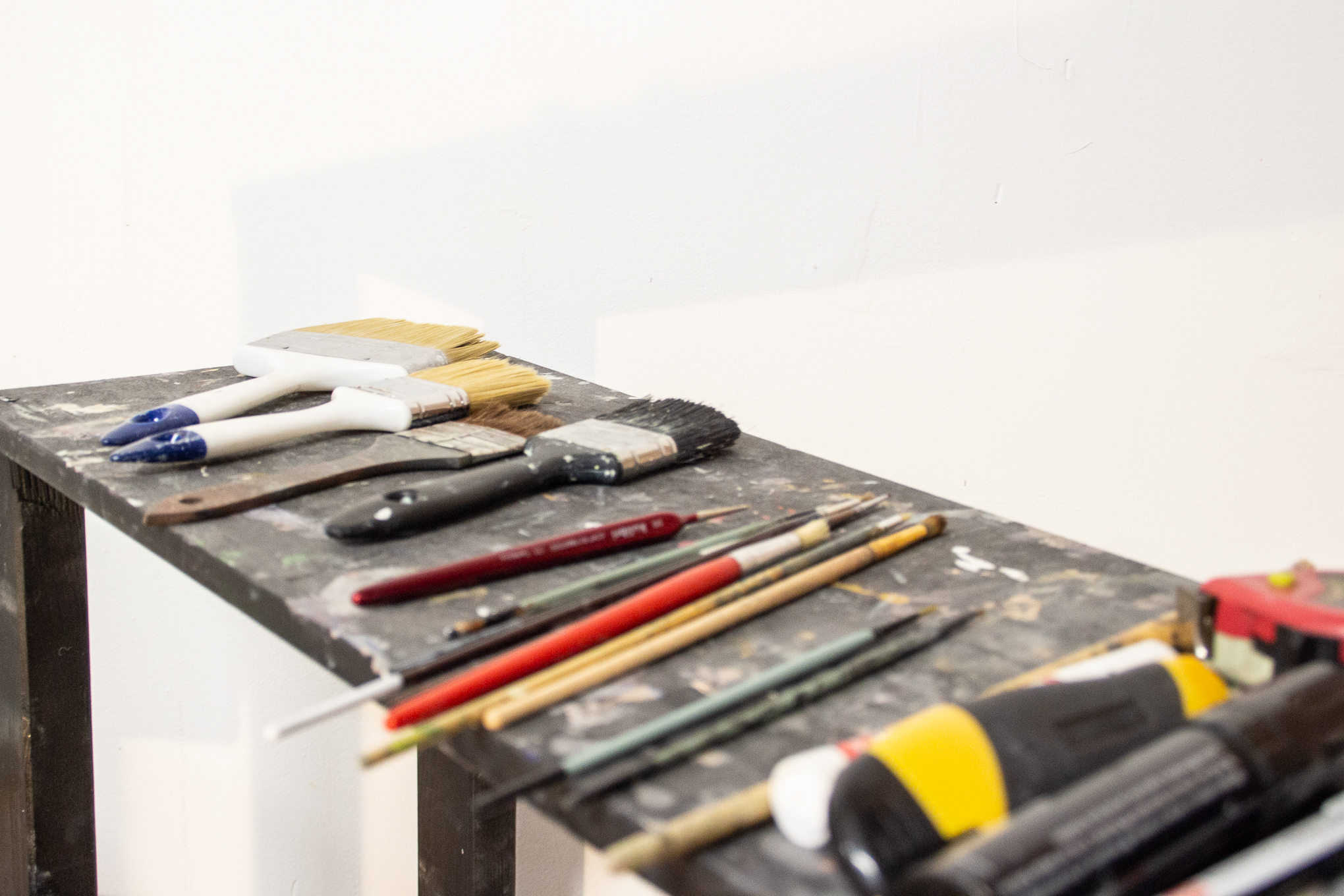 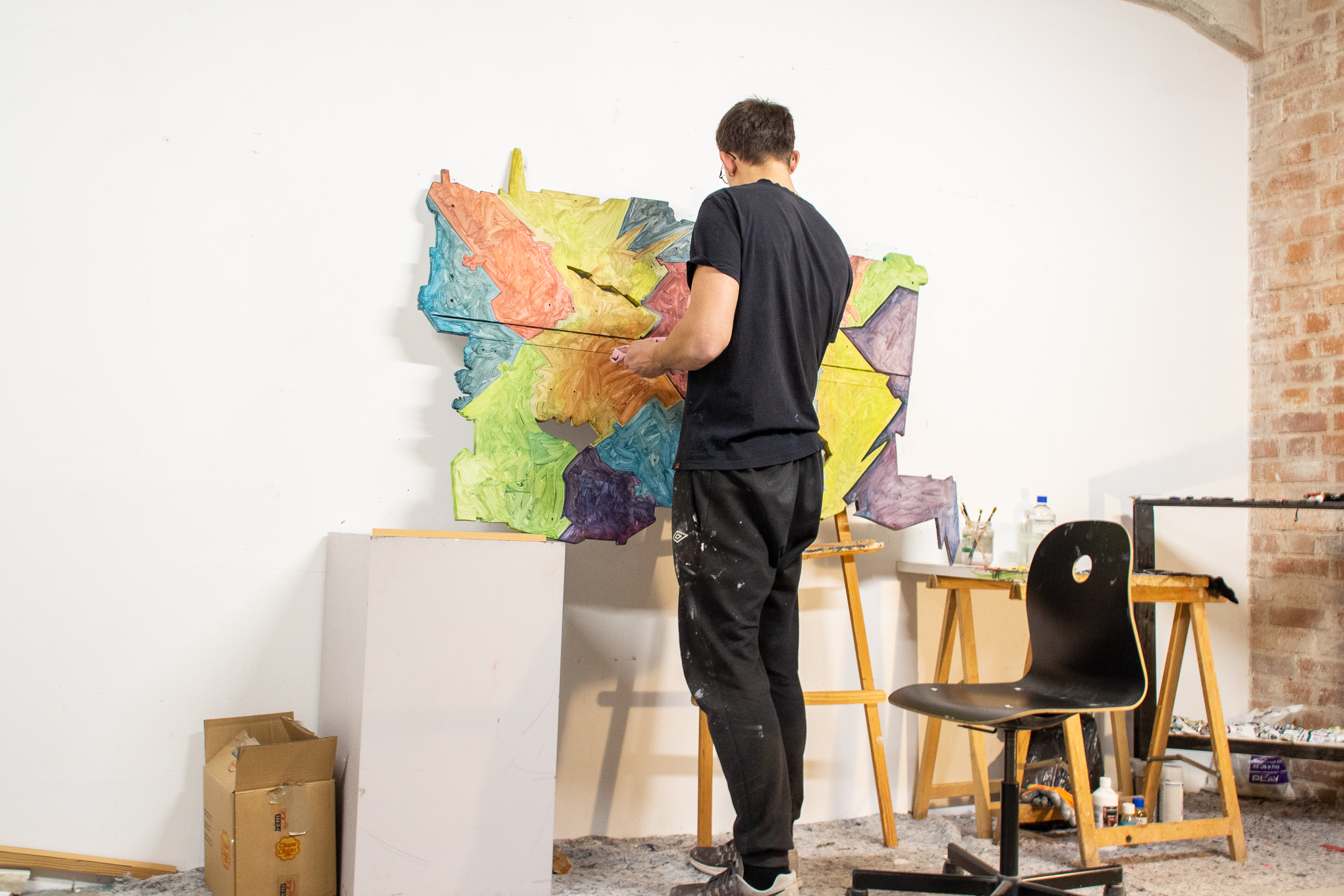 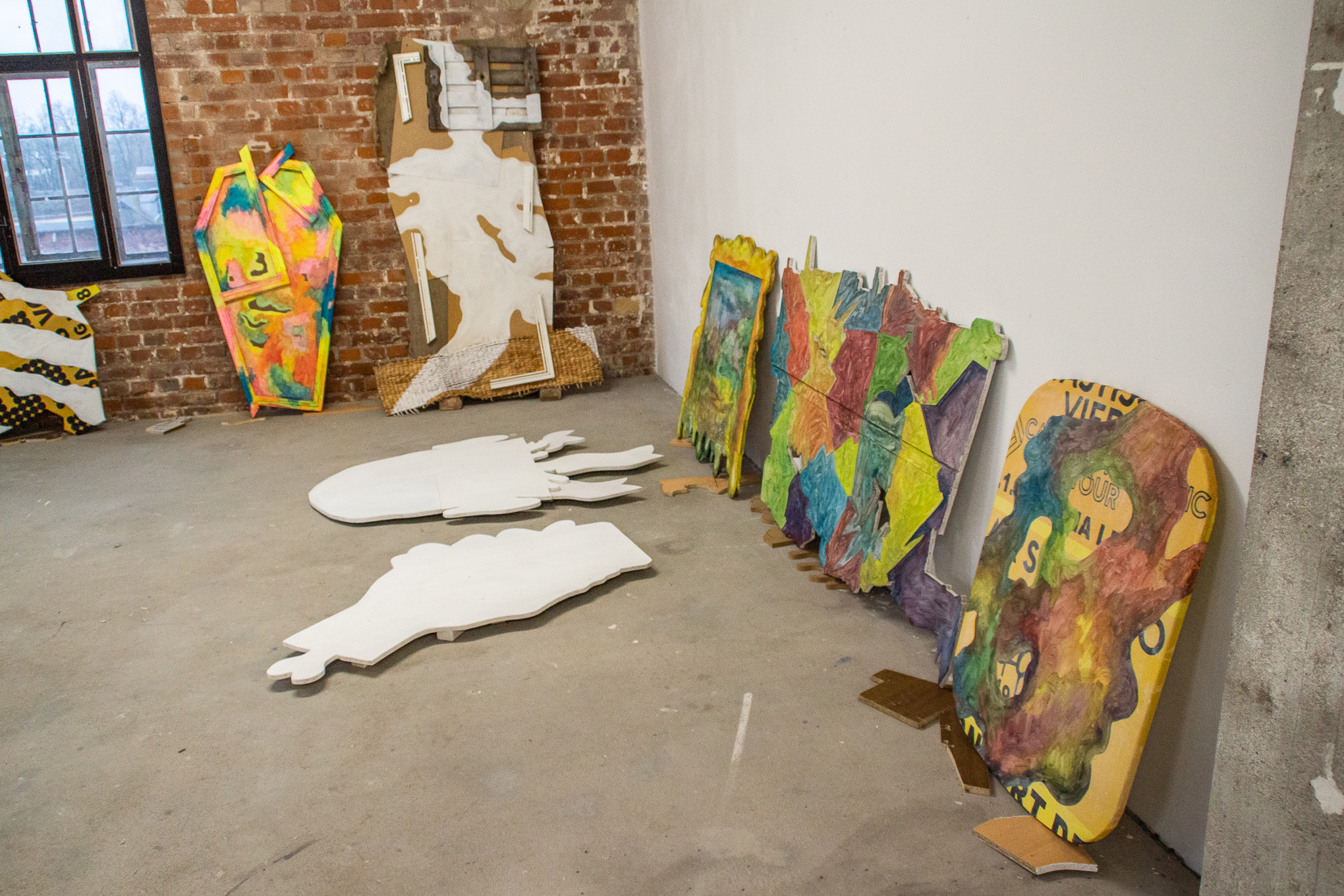 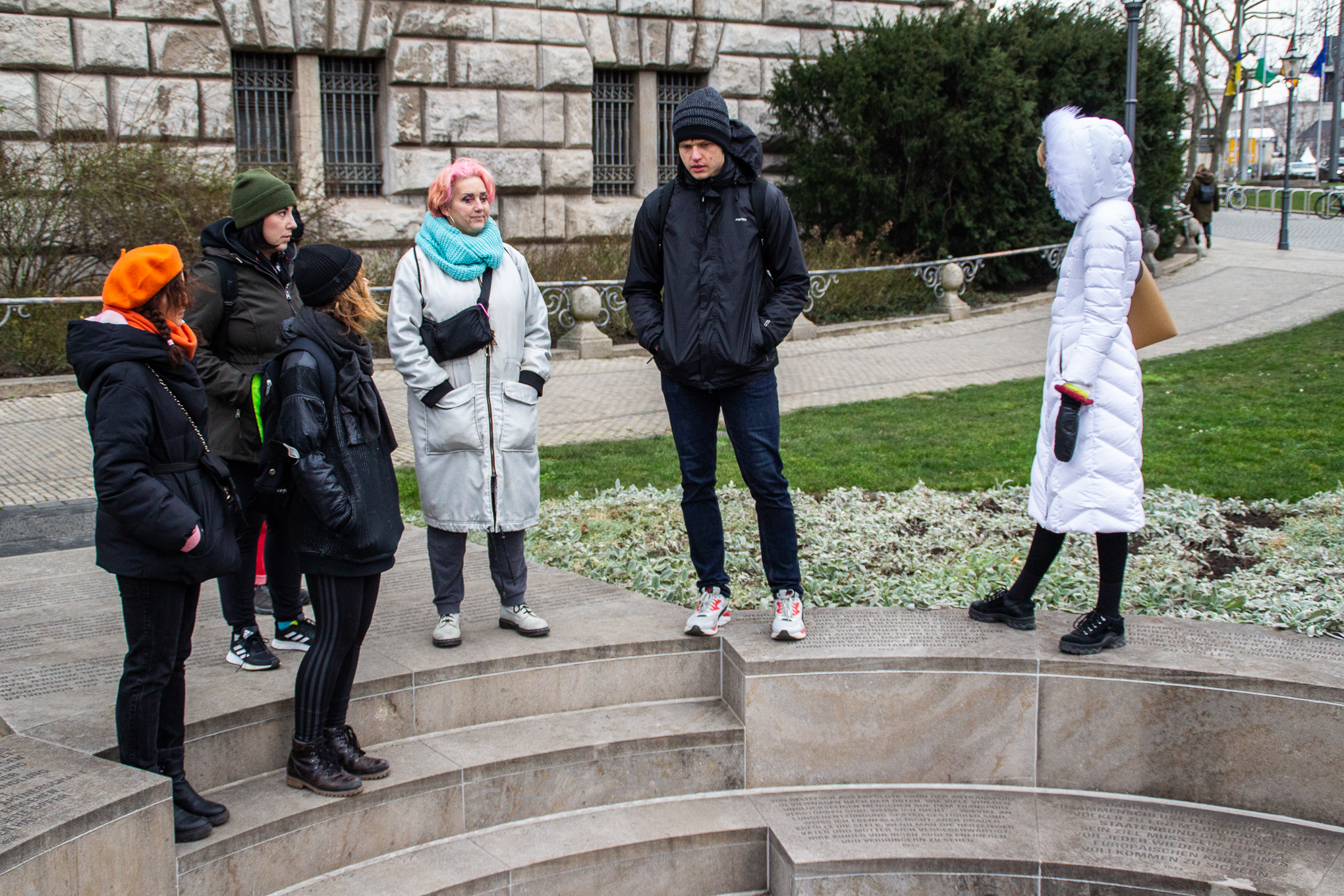 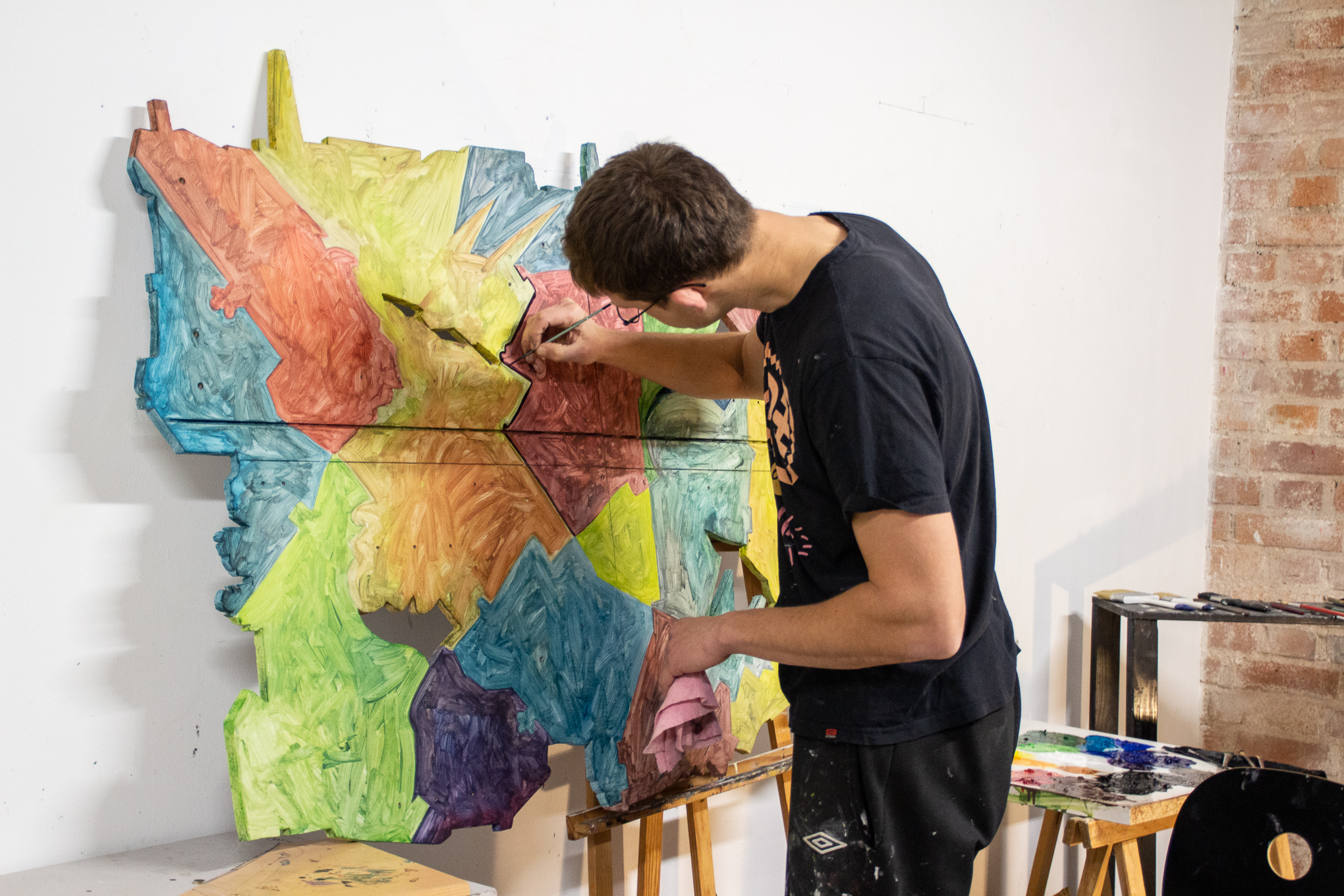 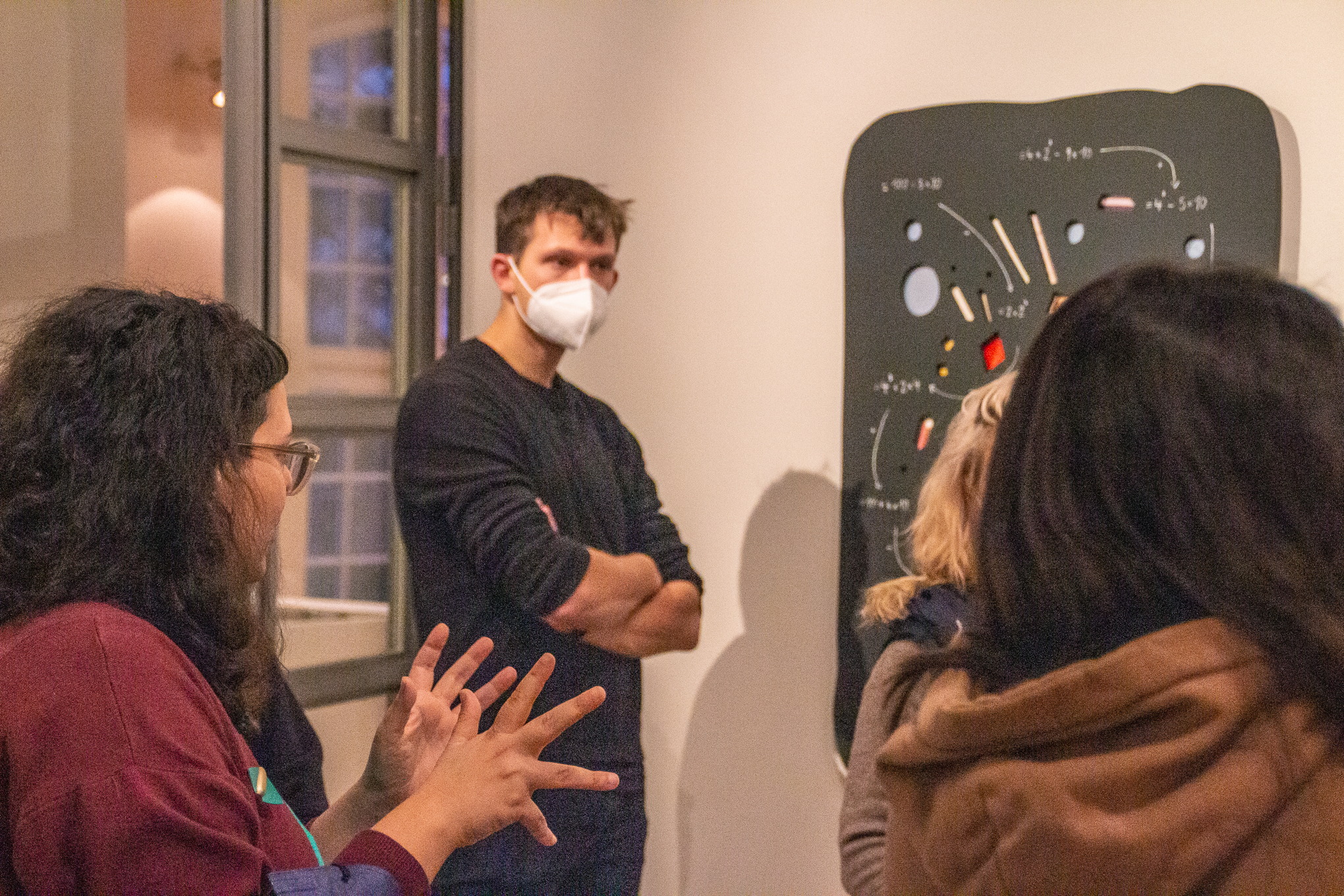 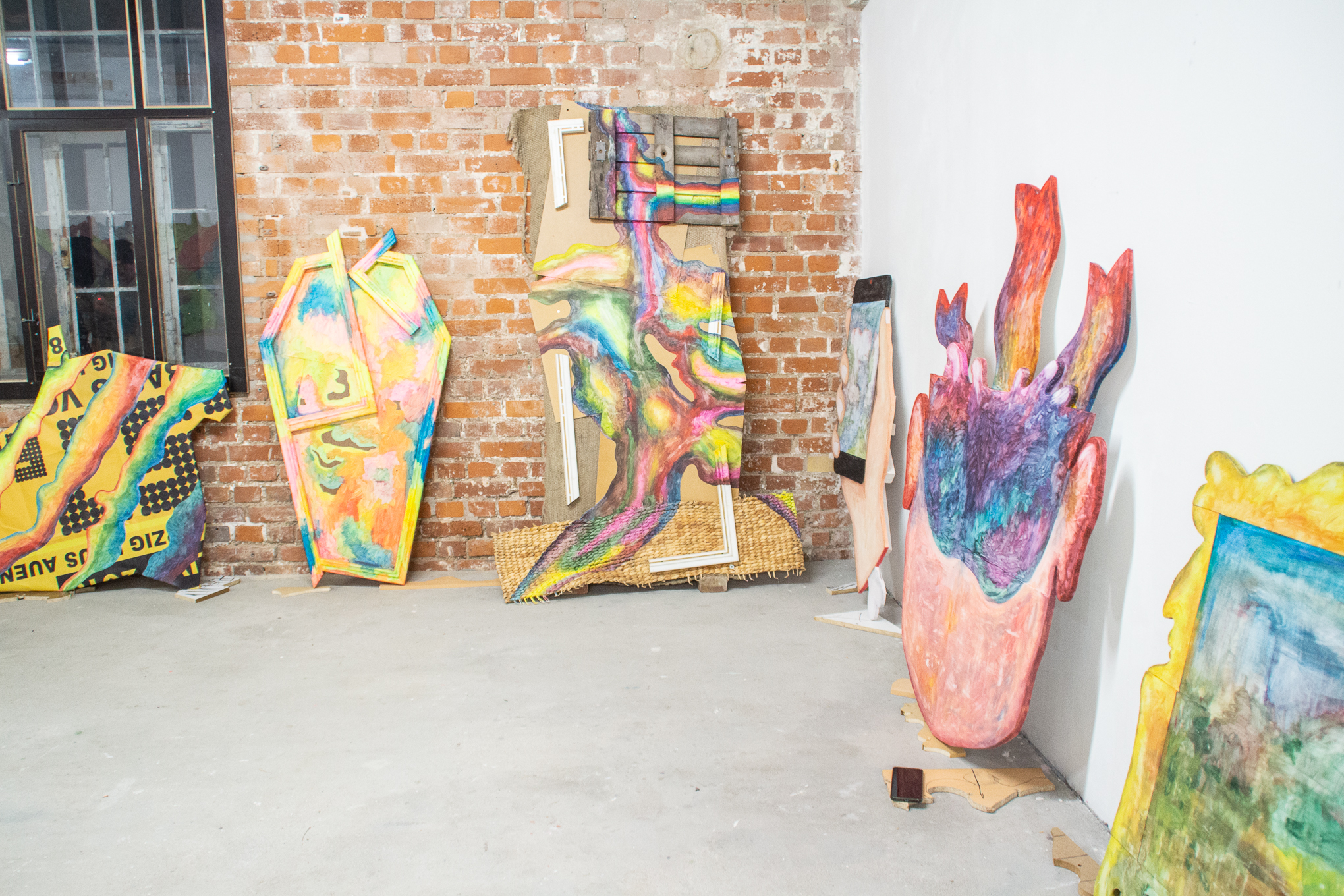 History and ancient Slavic religions, pagan gods… It is interesting to see how the past and even the ideas of the future influence our contemporaneity. Scientists speculate that even the elemental particles have self-consciousness. The fact that we’re comprised of billions of particles like this can really make us question our own free will. Do we really choose what we want to eat for dinner or even our partner? Is free will possible, can we ever be in control of our choices? Biological factors aside, we are constantly being distracted by our devices and manipulative programs installed on them. All this breaks our concentration and it’s even hard to find time to reflect on our situation.

Giving to the world and taking back from it

Here at PILOTENKUECHE, Ziemowit chose to take from his surroundings first.  He scavenged all of his upcoming “canvases”  from the streets of Leipzig. Later, he adhered monumental size panels together and cut them up into expressive configurations. With a paint layer on, these shapes develop into dense rhythmic visual metaphors.

In one of his paintings the hard edge of the board mimics the skyline of Leipzig. Inside, multiple colorful bubbles emerge. As a soap bubble dies out almost instantly, when we examine the richness of Leipzig’s more than 1000 year history. We can see how our own impact to the city dies out in a similar way.

Another painting, called 300 years, reflects on the passage of time through the perspective of a painter. Renaissance landscape overlaps with abstract brushstrokes in a golden frame that is about to melt into the floor. The layers emerge and intertwine, portraying the fact that when we look back on history, all of its layers suddenly flatten. The takeaway from Ziemowit’s work just might be that all the unstable, shaky matter which both surrounds and forms us, dictates the flow of the universe. The most permanent quality of nature is its impermanence.

You can find out the latest on Zeimowit’s website. We hope you’ll come see the results of his work while at PK at the upcoming shows…