In which ways does the way we see ourselves and the way the world sees us align or misalign?  Nara Rosetto (BR), Eitan Ritz (AU), Silvia Gentili (IT), and maeshelle west-davies (US/UK/DE) addressed  this question during their performances at CLOSENESS. Does regional background alter this relationship? The artists come from different parts of the world, each with their own cultural, historical and personal perspective.

The event CLOSENESS was part of blauverschiebung No.14 – International Performance Festival Leipzig at Galerie KUB and showcased livestream performances by PILOTENKUECHE’s online residents and a durational performance by maeshelle west-davies.

‘I consider my body as one of the subjects of the world. I suppress my awareness about my view, which is my means of recognition, and treat my eyes as bits of matter. From then on, I trust that my eyes position external subjects in the objective space where I intend to position the external subjects, and that perceptual prospect occurs as the subject is projected onto the retina.’ – Maurice Merleau- Ponty

As the physical body resides in the world, it deposits its habitual layers and offers a free environment of behaviors. The habitual body is not a physical reality, nor does it become relieved with a simple idea. For instance, this can be understood through the experience of people whose hand or foot was amputated in the past. Hallucinations of their pain and loss seizes them. It is the reason liberation, subordination, truth and errors cannot be divided.

According to French philosopher Maurice Merleau-Ponty, the ‘body’ is a main agent of perception. At the same time, it is the target one perceives. Here, the issue of perception is important. Humans exist when they discover each other in the world. Others and self recognize each other and converge in this awareness. If we observe this from a phenomenological aspect, the ‘body’ is the place where ‘meaning’ is revealed.

In Closeness 1 (2021), Nara ‘plays the role of touching the body’ while performing ‘the role of getting touched’. Her body becomes the ‘main agent’ of discernment while also the target of perception. In detail, to her, ‘body’ is the ‘place where the main agent and target are rotationally involved’.  She implies that ‘her feelings’ and ‘the atmosphere of the world’ through the body entangle ontologically. Additionally, the aesthetics that she reveals effectively involve a formative method. She captured a realistic space without any particular interpretation and does not miss out on formative elements through color compensation. 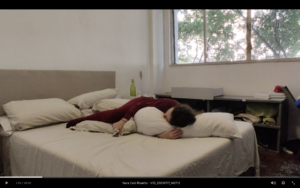 Nara uses red and white to detect the feelings inherent in the organ. This effectively reveals the limits of the gestures, the optical unconsciousness that only the camera can capture. And  finally, the gap between the reality and unreality that can be exposed through it. At first it looks cozy. However the tone and the texture offset the warmth causing powerful emotions. We are confronted with ‘the coexistence between life and death.’ Clearly, this evokes feelings of being disturbed and creates unpredictable reactions from viewers.

The detection about the condition tends to vary depending on the surrounding environment and position. Closeness 2 (2021) by Eitan suggests a dark side that one wants to cover up. It appears as a realistic act before our eyes rather than imaginary processed artifact. The realistic narrative operates as a neutral story with open possibilities of comprehension, rather than an inordinately implanted story.

The screen locks him in a space of an unreasonable life (room). We fix our attention on the outside (inside) but it is insignificant. Unlike the body which precipitated internally, the natural image on the other side reflected on the window inversely optimizes the immatureness of the existence. The form is losing light in this scene which the irrationality and isolation of life intersperses. Where is he? 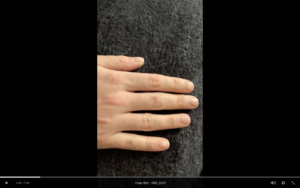 Therefore, physical perception is a place perception, and it can be a condition of insight. Eitan shows that space perception does not depend on intellectual decision. It is based on the locality of where the body is located. We can interpret this as the proposal of a new relationship about humans and space.

If the method to devise the world based upon the physical body involves general understanding, artistic perception about the vivid material world represents a perceptive act.  Silvia‘s  Closeness 3 (2021) resets the self to zero and creates newness through the concept of Self and Other Oneness. She draws an arm vertically or hands meet to form an angle, and each time, she makes the depth or the height different to wind up the air. The white wall awaits an image to form, acts as a property of matter that transfers the tremor. She creates senses of varied properties and specifies them as images expressing themselves while intersecting each other. 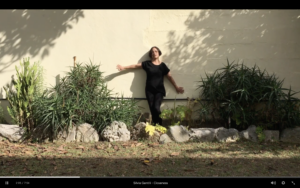 Gilles Deleuze said the following about the relationship between the physical body, senses, and colors: “Colors belong in the physical body and senses are also a part of the body, as it is not in the air. Senses are drawn. In the drawing, the body is drawn. The physical body was not represented as a subject, as it verifies to be alive since the senses can be felt.”

The delicate emotions and the immaterial existence of the artist under the natural light are sentimental. She chose to utilize the sun rather than installing lighting in the screen. The physical intervention of the artist varies depending on how the sun and the shade fall. Silvia expresses it as a poem conveyed as imagery. Likewise, she always fills the material world that is perceivable with inner movements.

‘The human that dreams before a fireplace is a human of profundity, in other words, a generative human’

maeshelle‘s my face springs from a transcendental prospect based on anthropological imagination and the visional introspection of the inner world. The symbol of being ‘female’ mostly retains a conventional typicality when it involves language or image. However, this is actually all different, and the significance of it varies depending on the situation. It reminds us that appearance, which is one of the categories, is just a typical one-time reveal of the specific subject and the many experiences it references. Here, concreteness and abstractness function oppositely.

Despite the mirror that illuminates a specific subject and a well-defined form that reflects on it, the looker spends more time undergoing different feelings and sentiments inside. Rather than distinguishing the subject of command. The images that result from ‘disguise’ continuously change meanings. She concludes as an imaginary perceptual experience that cannot be regulated. Here, one cannot discuss the physical body in a representative relationship, as it becomes a part of a boundless nature, just like a side of an apple slice. 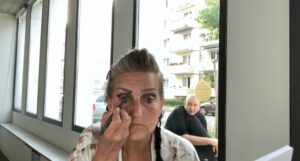 Over the 6-hour long performance, the artist explored the face with different techniques and implicitly revealed the essence of the perceptional experience. In addition, the impossibility of finalizing the meaning of stripping off the epidermis of the subject. Likewise, material image is absolutely not on the opposite side of the human mental world and imagination. Aesthetic impression about material is preferably mystical.

Performance is a link

Performance is a link for thinking. At the same time, it functions as a device that can newly weave the things that are yet to be connected. Regarding the issue of whether the open structure assures active weaving, it is still difficult to solve. Yet, just like the question suggested by CLOSENESS of blauverschiebung No.14 – International Performance Festival Leipzig, attempts are continually being made. 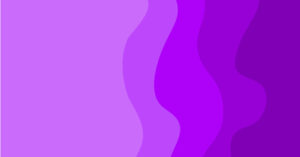 PILOTENKUECHE is happy to announce our upcoming show which starts 10 September 2021. It will be comprised of video works from all 14 participants of our online residency program for 2021 and marks our first time showing at a&o kunsthalle.