“LIFE DOES NOT WORK HOW I THOUGHT IT WOULD” This sentence from a work in Devon Plett’s first art show is simple, yet it is a deeply philosophical statement; a conclusion after some time of contemplation. He knows that thoughts and ideas need a while to develop, to then be expressed with intentionality.

This word is the keyphrase for understanding Devon’s art and personality. He is the first artist to be presented as part of the 50th round of PILOTENKUECHE’s international artist residency program, which kicked off with some hybrid adjustments at the beginning of January.

It is a quiet Friday evening, and Devon’s stillness intrigues me. After my haphazard questioning, I adapt to his pace and our interaction slows down. He is not a man of many words, but someone who carefully selects each piece of information to share with me as we sit at the two ends of a big table. Soon I find out that he has always been telling people he was an artist, because he felt that that’s what he was supposed to do. He has always identified as being one. Influences from home created a base for Devon. His mother is a painter, his father a builder. Together they gave him the input for developing an interest in creative processes, and producing artworks. It worked. One day he wanted to make a painting, so he did.

Consequently, traditional art education is not the main topic. I am interested in all the other things which have surrounded Devon and influenced him. He comes from Saskatoon, Canada, where he runs a DIY workshop called Makerspace. Devon has been involved in making street art and public art. He often finds himself driving around the countryside to find an abandoned house to paint on. It beats getting caught for spraying in town. 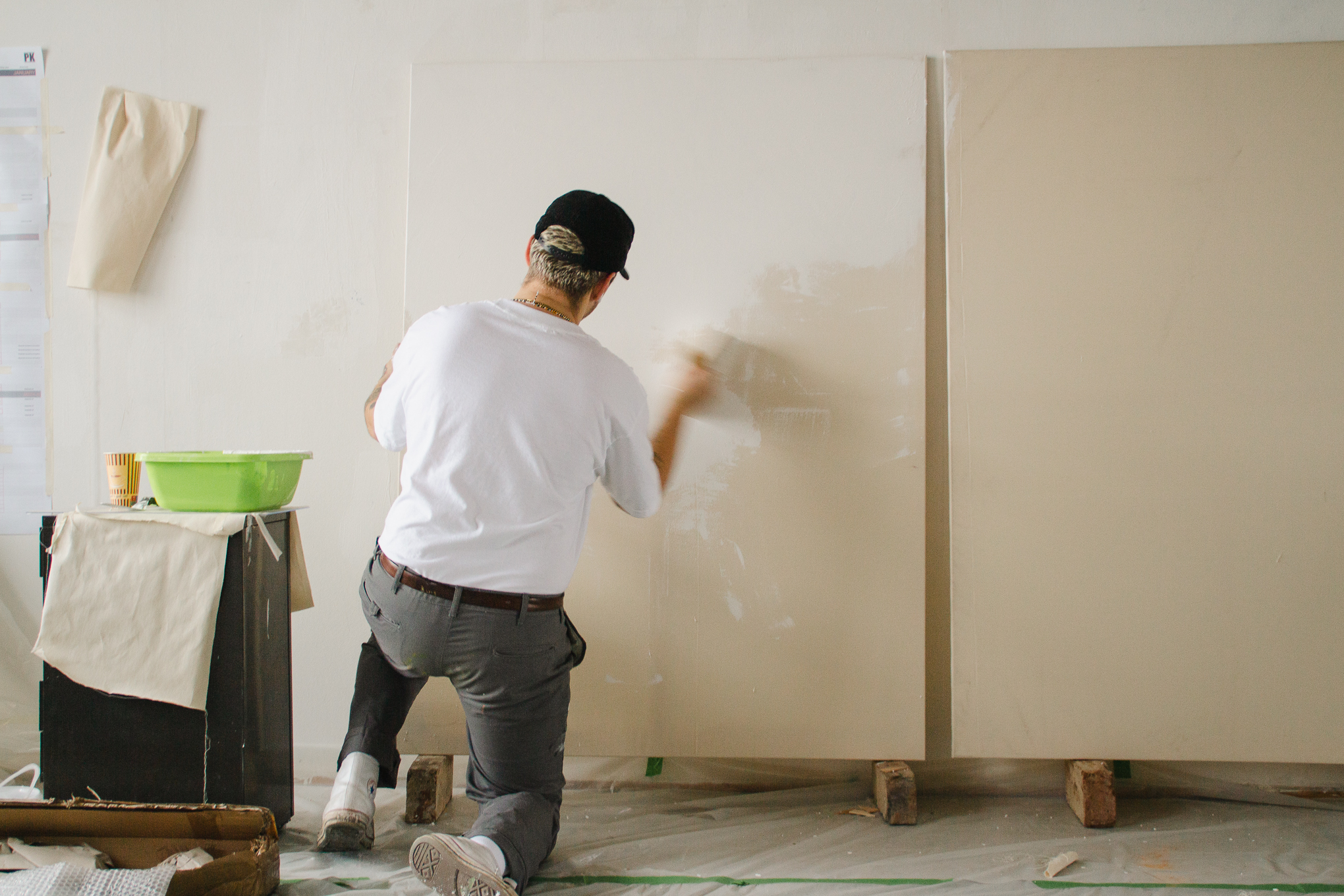 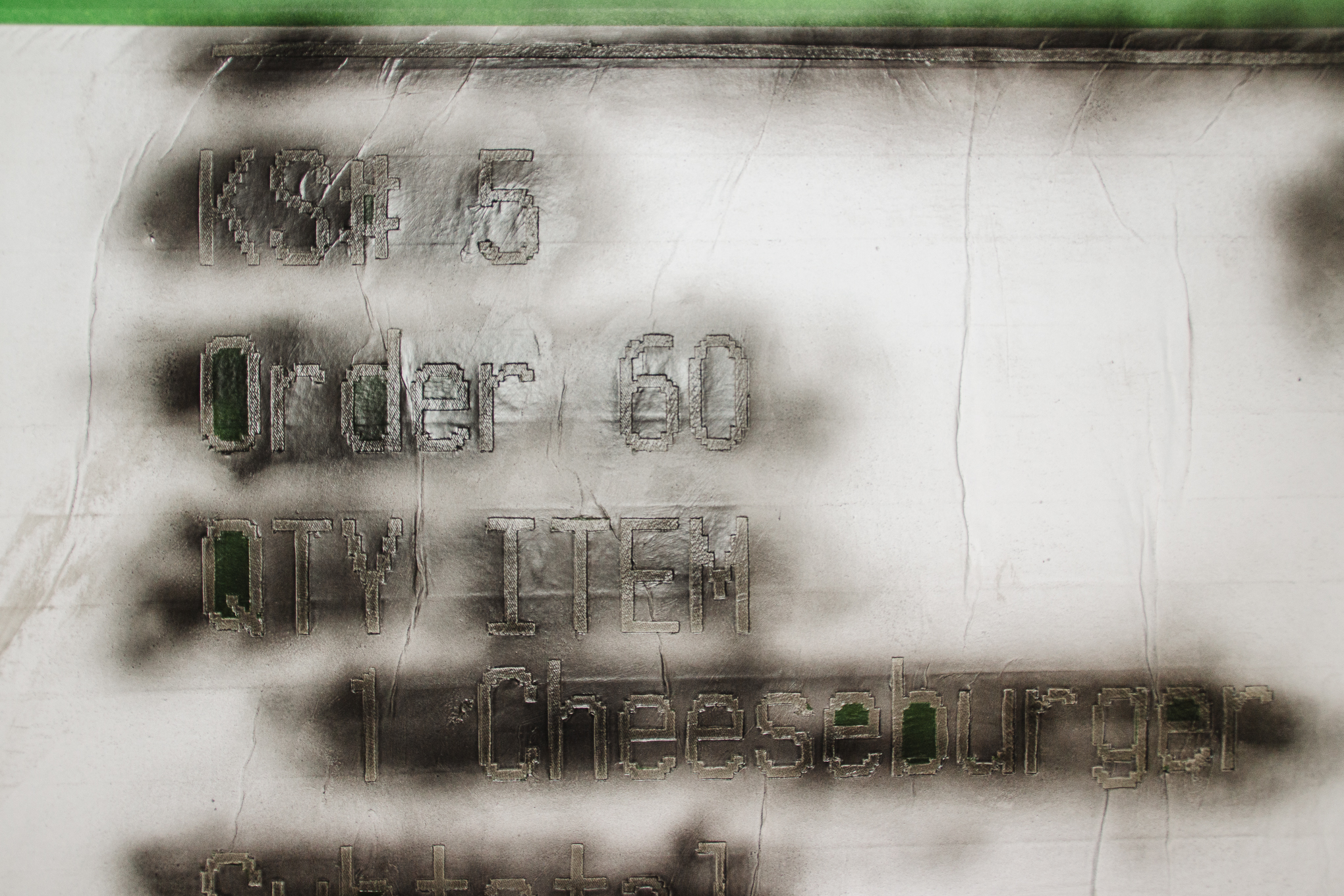 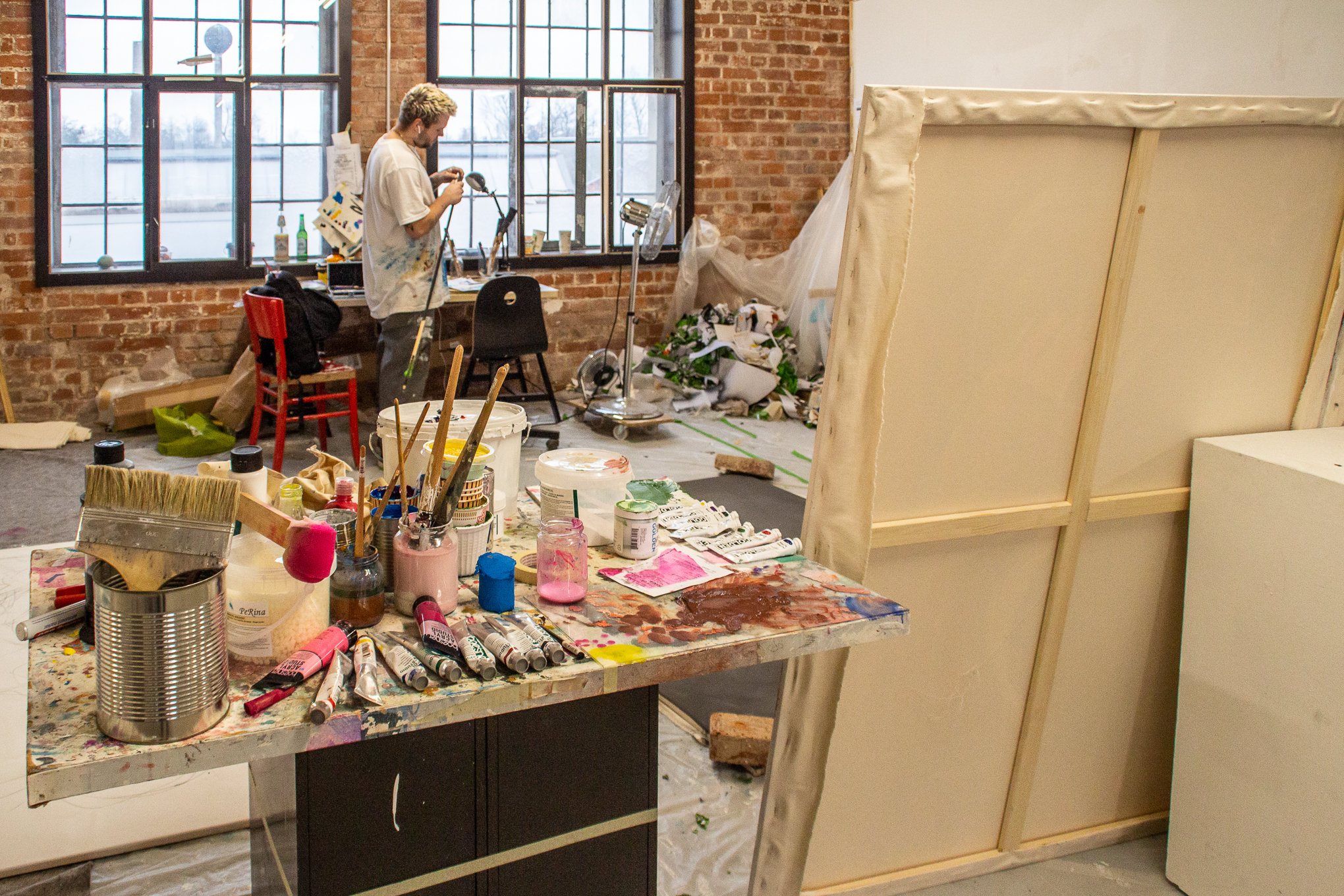 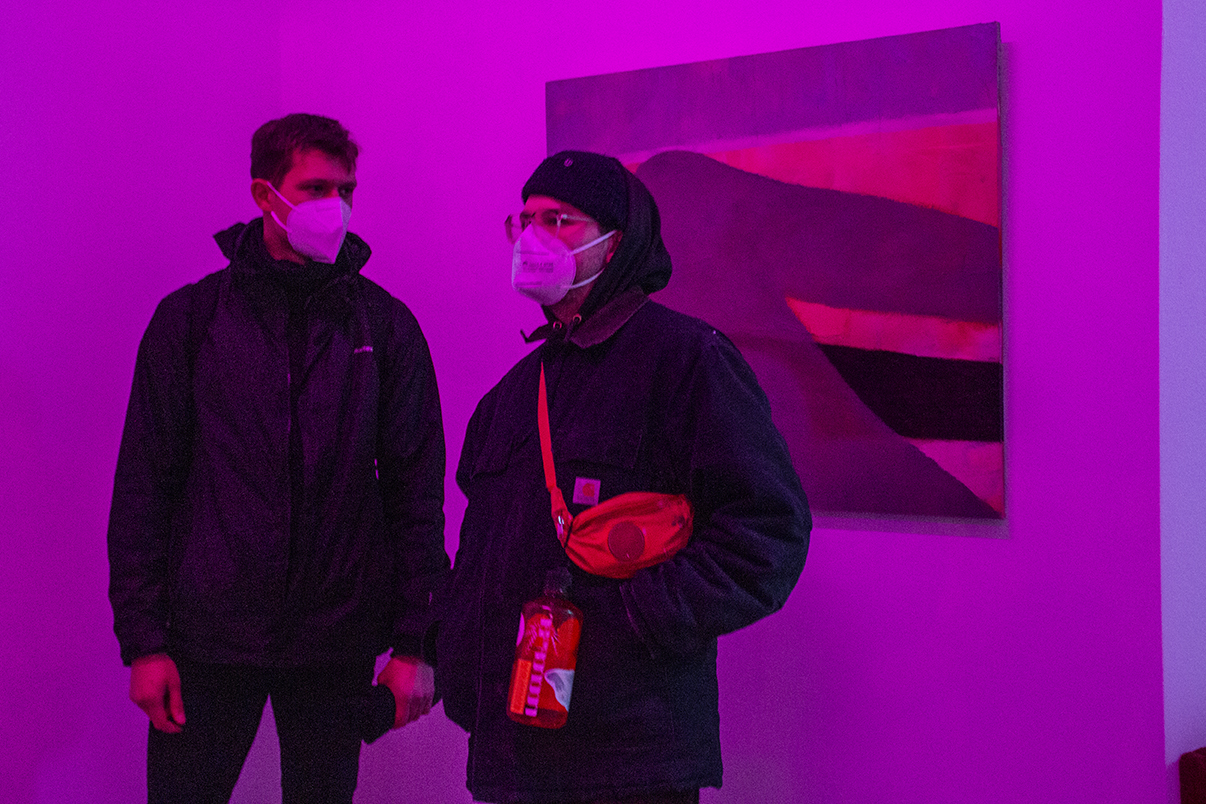 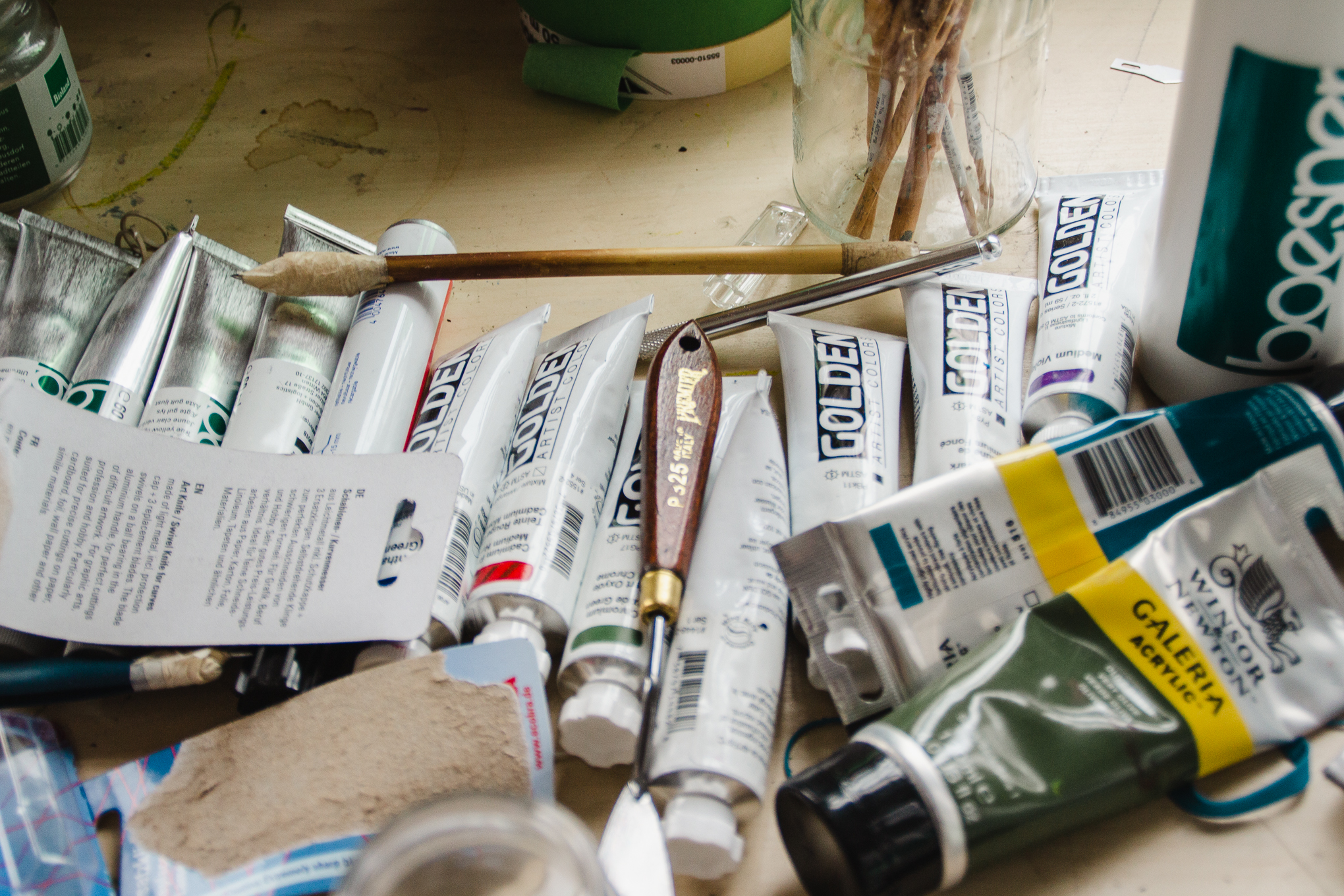 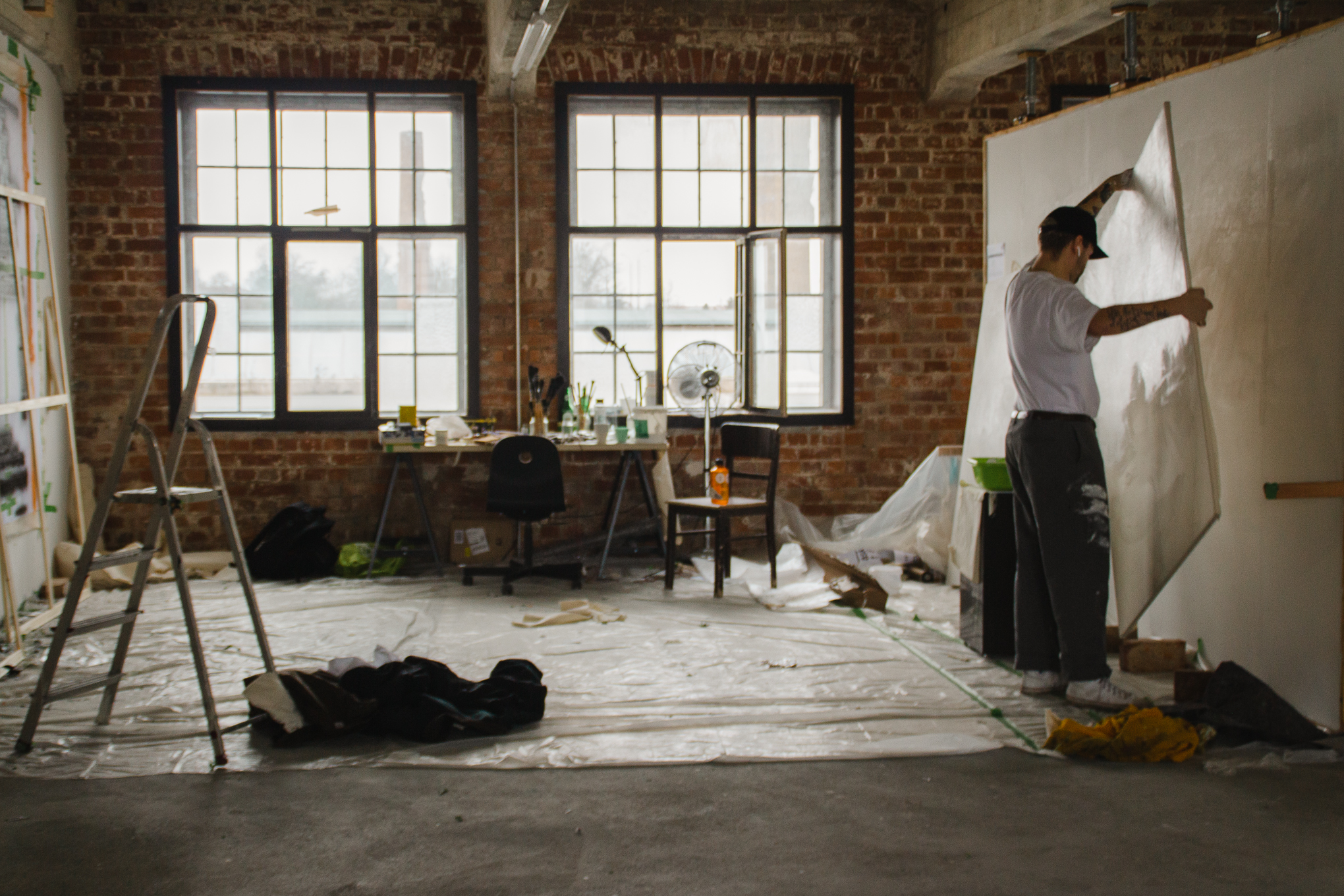 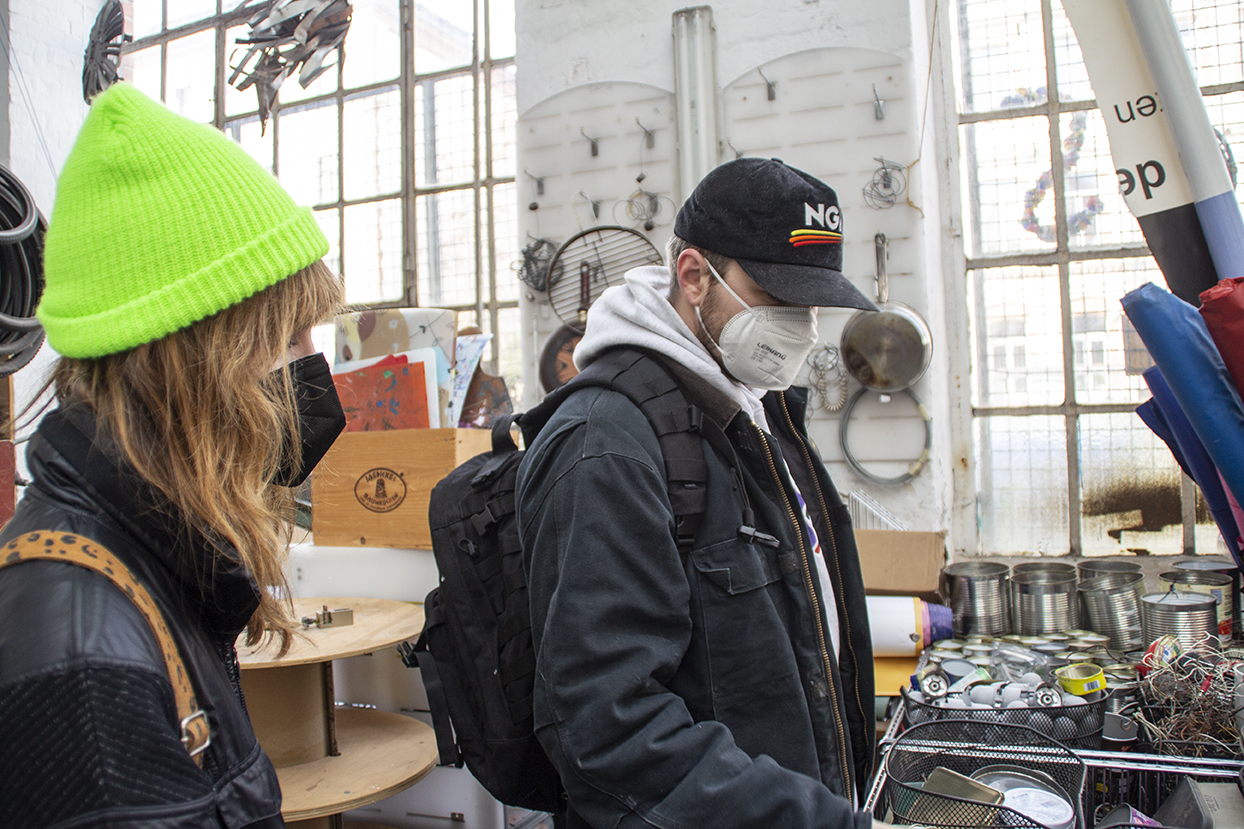 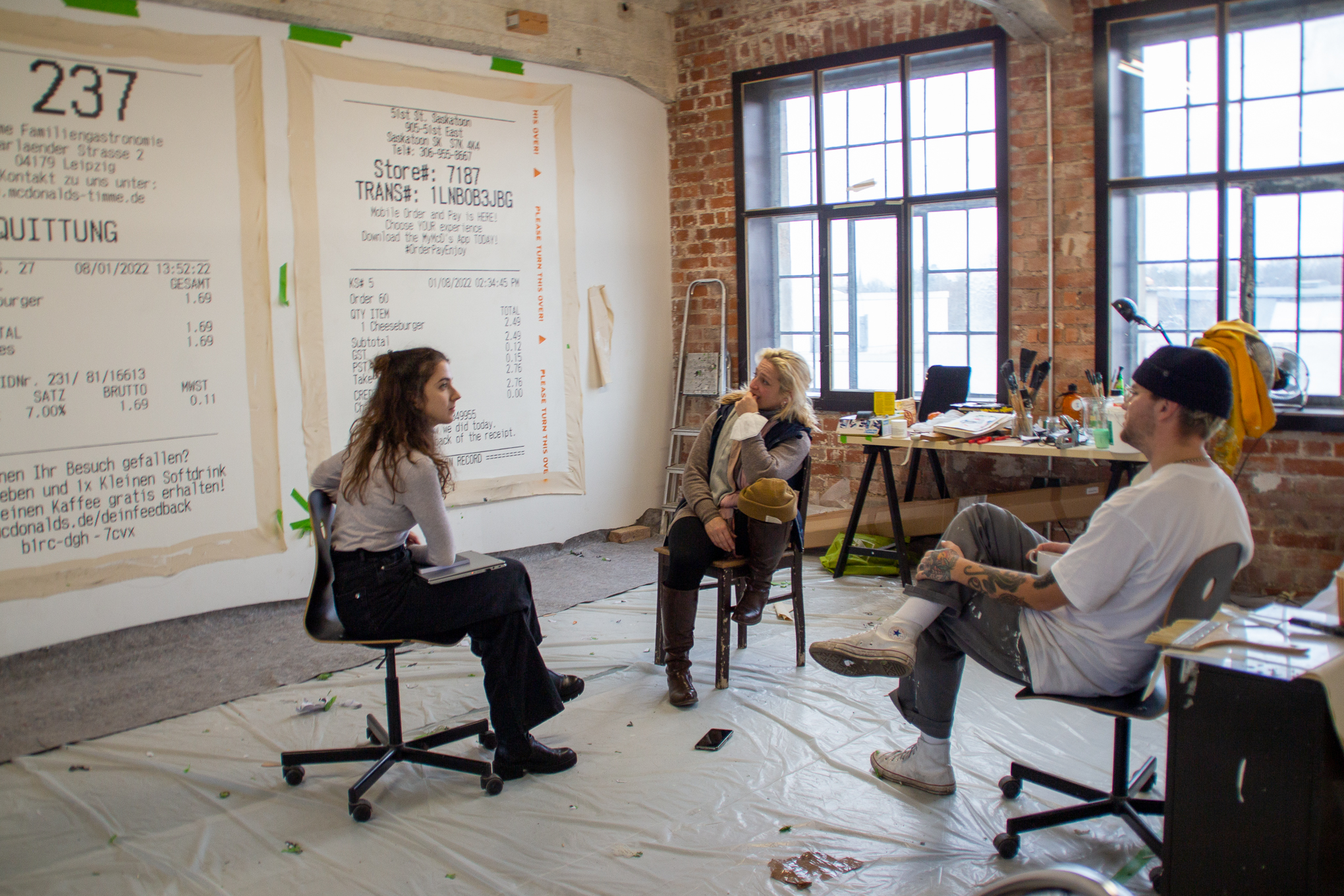 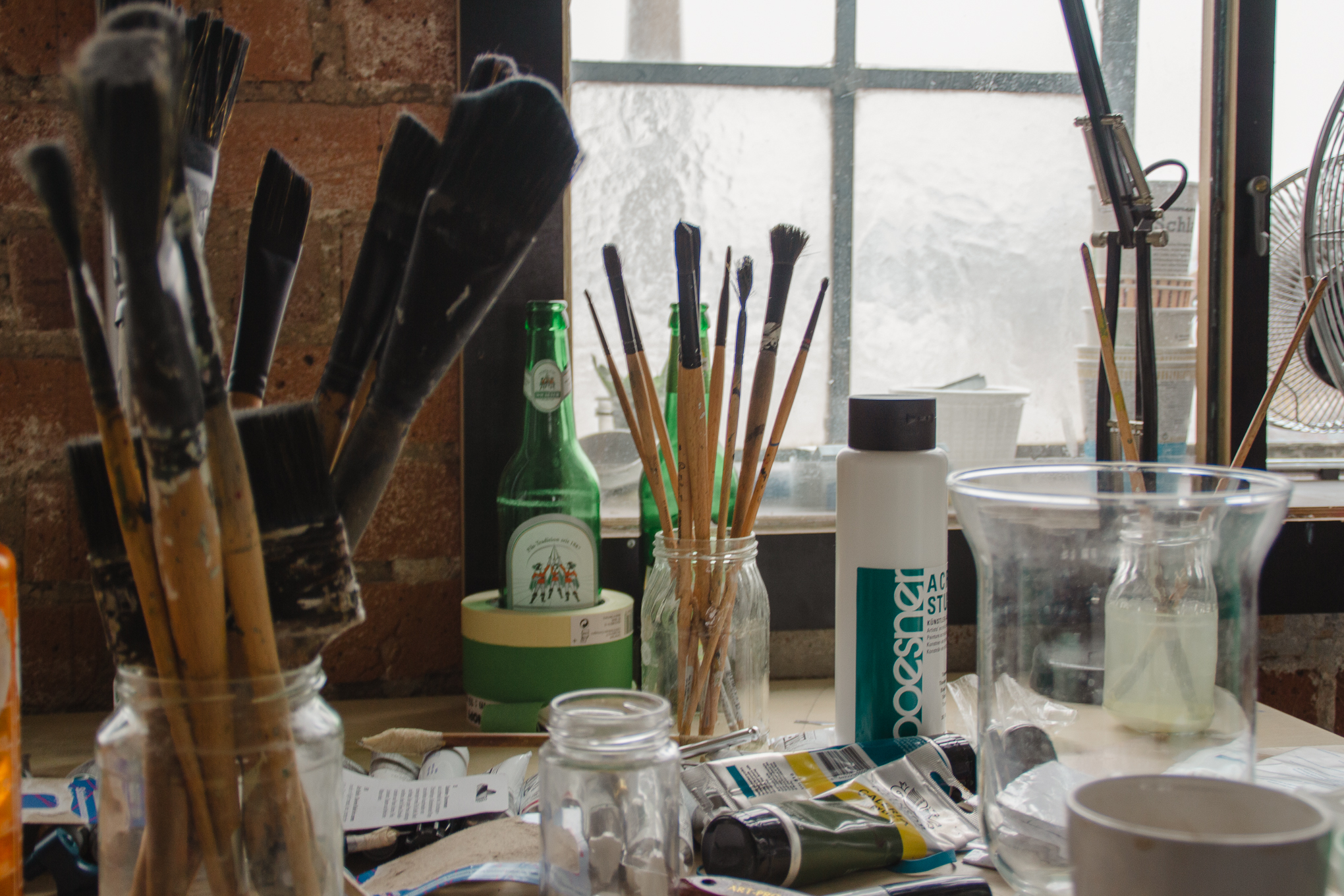 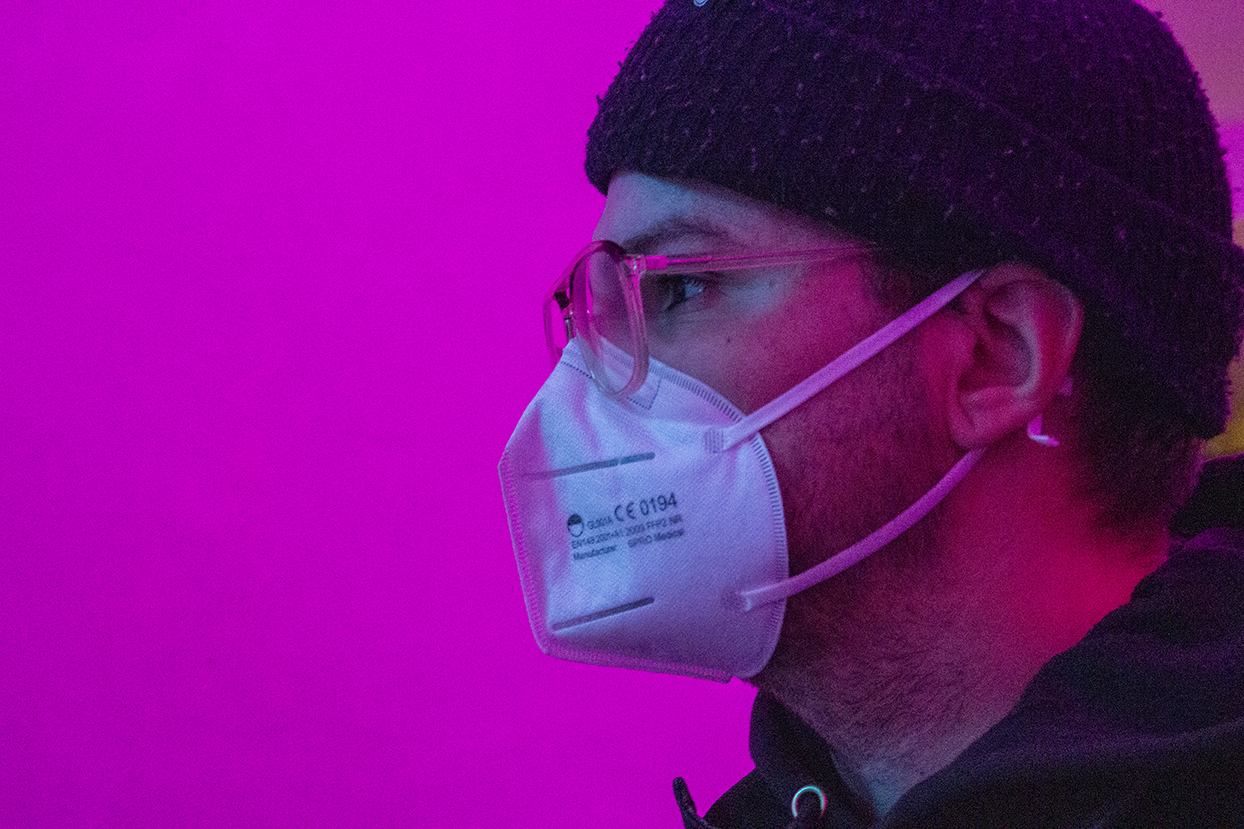 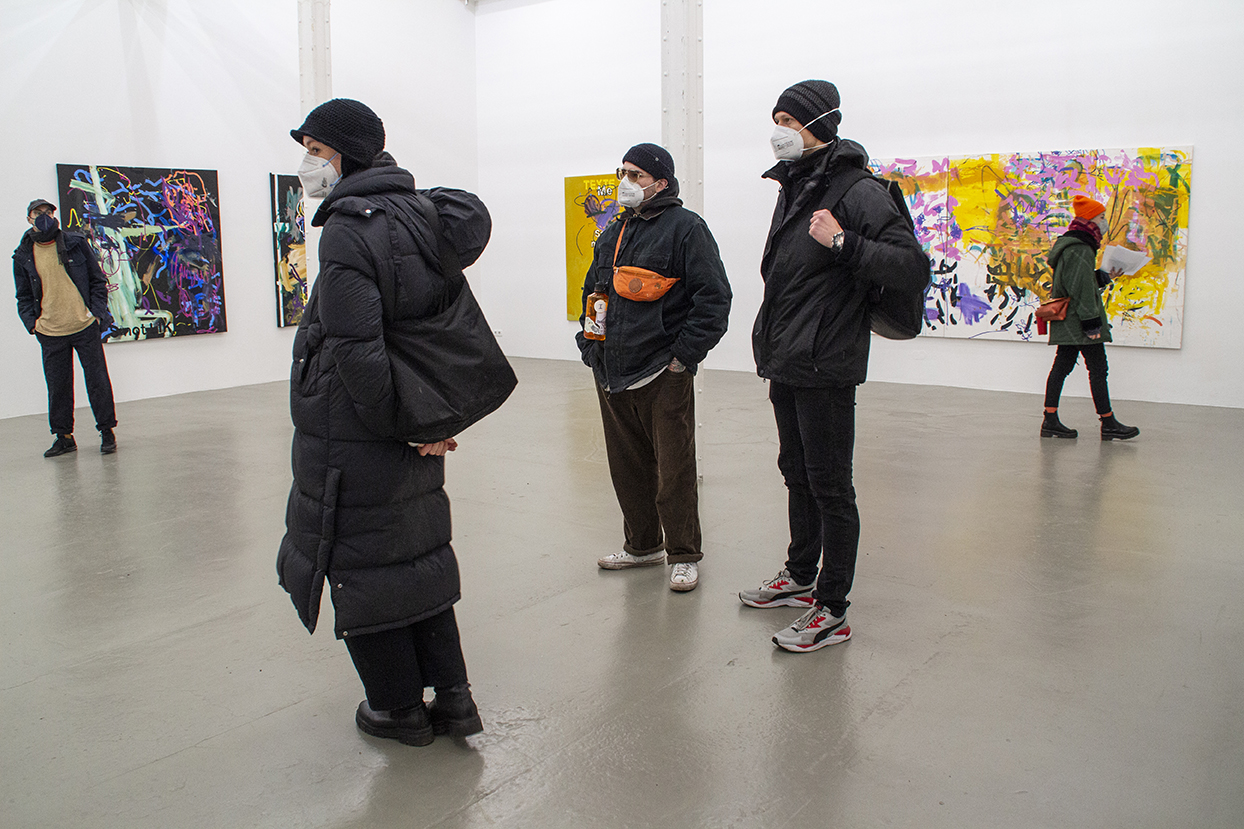 Devon has always been surrounded by creative people who are down for having great adventures together. He likes to combine these outings with executing his projects. One of his murals came about while on a camping trip with friends. The group action of creating the piece was, “…tough, fun and genuinely scary alI at the same time.” For Devon, making art is about finding peace or something positive out of the act of creation.

A playful attitude towards life definitely gets translated into his works, though the matters are actually serious. This dichotomy plays out well in his solo exhibition which he made in his own former studio. It was entitled Please Turn Off Your Phone. In some way rooted in experiences reinforced by the pandemic, the show tackles topics such as taking a rest, being in the present, and our relationship to our phones and social media.

At the same time, the question of empathy in a digitalized world interested Devon as well. How does our relationship to technology influence our capacity to empathize? With many causes popping up in your feed, the pressure to empathize has surged, especially during the pandemic. This phenomenon is part of a growing demand on our brains, which, according to him, has reached a harmful point. It is definitely true that social media can strike unnecessary guilt in us. However it is important to inform ourselves and understand what is happening around us regardless of what the algorithm throws in our way.

Playfulness in artmaking is something to be taken seriously, and this is an important contrast in his practice. A central piece of the aforementioned exhibition is a sculpture of a figure pulled out of a painting. Attached a text reading “please look into it” invites the viewer to look through it and see the other works. With the gesture of transforming a painting into a three dimensional form, we are able to imagine other paintings in the same way.

Transforming studies into bigger paintings or sculptures, Devon is often interested in shifting and/or switching the size and medium of one specific work. He is currently playing with scale and how our brain processes it. In his studio are two large format (200cmx150cm) receipts which have been transferred on canvas through means of stencilling and spray-painting. These will become the background for abstract paintings. The receipts are of the same product from the same fastfood restaurant, but purchased in different countries. Placing them next to each other also creates some sort of contrast and comparison. Inevitably it is a comment or critique on the impact of capitalism and consumerism as well.

You can find out the latest on Devon’s website. We hope you’ll come see the results of his work while at PK at the upcoming shows…